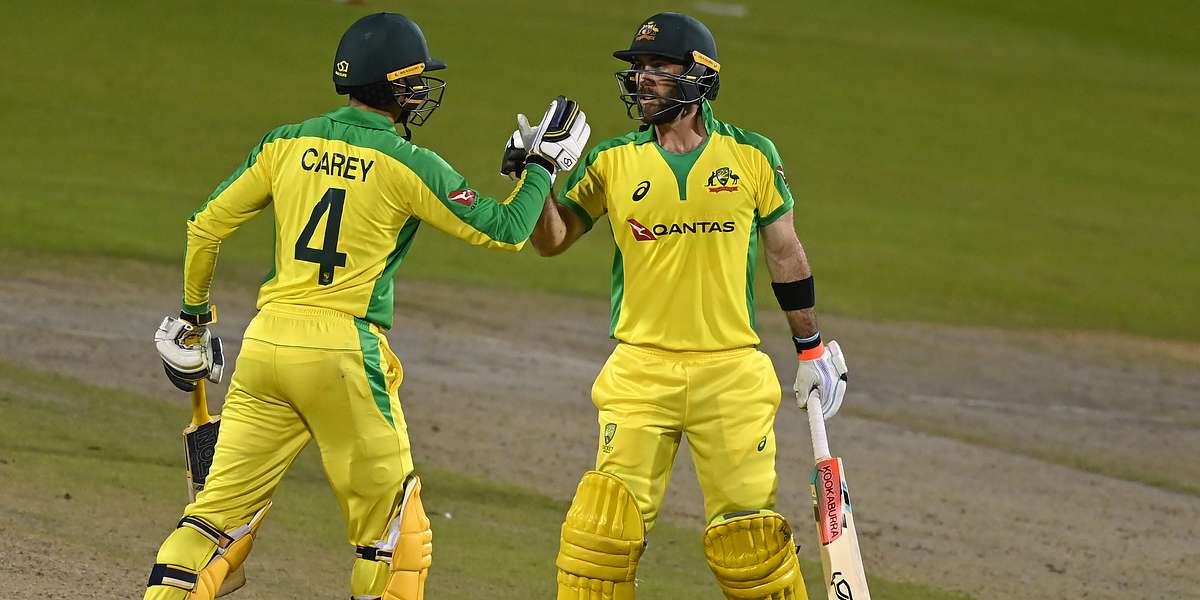 From 73 for 5, Australia chase down 303 with three wickets and two balls to spare

A magnificent effort from Glenn Maxwell (108) and Alex Carey (106) powered Australia to a three-wicket victory against England in the third One-Day International (ODI) at Old Trafford, Manchester. With this win, Australia handed England their first series defeat at home since 2015. Australia looked down and out at 73 for 5 in the 17th over, but Carey and Maxwell put on 212, which is the highest partnership for the sixth wicket while chasing to make a match of this. Australia also now have registered the highest successful run-chase at Old Trafford. 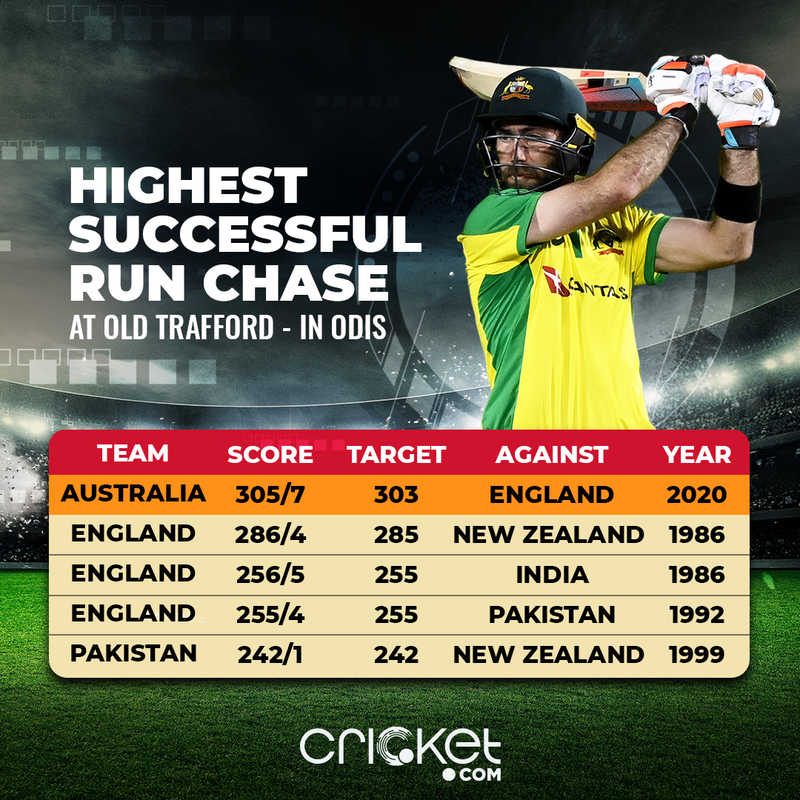 In pursuit of 303, Australia got a few quick boundaries, but Chris Woakes, fresh from his fifty with the bat, trapped Aaron Finch for 12. Marcus Stoinis added just four more as he became Woakes' second victim. Australia struggled to get any sort of momentum and managed just 47 in the first 10 overs and needed to score at 6.4 to win.

Eoin Morgan took everyone by surprise when he introduced Joe Root into the attack right after the first Powerplay, ahead of Adil Rashid, Tom Curran, and Mark Wood. The gamble paid off as Root knocked over Warner's off stump with a sharply turning delivery, much to the Australian batsman's surprise. Root went on to spring another surprise, this time getting rid of Mitchell Marsh for two. At four-down, Australia were staring down the barrel and England were right on top of them. Australia further added to their misery as Marnus Labucshagne was run-out for 20.

Australia lost half their side inside 17 overs and the required run-rate crept past 6.80. Carey and Maxwell were their only hope. The duo brought up their 50-run stand at almost run-a-ball, but the asking rate had gone past seven. Carey was given a life when he was on nine, caught off a no-ball early in his innings and he needed to make the most of it. He did just that and brought up his fifth half-century. Maxwell first went past 3,000 ODI runs and then brought up his 21st fifty, better than run-a-ball.

The Carey-Maxwell stand, which was over 100 at this stage, gave Australia a glimmer of hope, but they still needed to score at 7.50 runs an over in the last 15 overs. Both teams were neck and neck with 11 overs to go. Australia with two set batsmen at the crease suddenly seemed to be causing England some worries. Maxwell and Carey brought up their 150 partnership off just 144 deliveries and things were looking ominous for England.

The equation came down to 51 off 36 with five wickets in hand, with both Carey and Maxwell staring at a hundred. Maxwell and Carey did not choke and took Australia closer and closer. Both brought up their centuries and it seemed to be just a matter of time before they would wrap it up. However, Carey and Maxwell fell after getting to their milestones, with Australia requiring 10 from the final over.

Morgan took a huge risk getting Rashid to bowl the final over. That did not work as Mitchell Starc smashed the first ball for a six and then wrapped it up with a boundary and Australia got home with two balls to spare. Starc started the day off with two wickets off two balls and then struck the winning runs in the end.

Earlier, Jonny Bairstow's 10th century and his 114-run stand with Sam Billings (57) helped England put up 302 for 7. This despite England making a disastrous start with Starc getting rid of Jason Roy and Root off the first two deliveries of the match. Morgan survived the hat-trick ball, but needed to play a big innings to get England out of trouble. Bairstow and Morgan then started to get a few boundaries, which relived the pressure to a certain extent. Batting looked to be easy and the batsmen were dealing in boundaries. Their counter-attacking cricket enabled them to bring up the 50-run stand off just 44 deliveries. 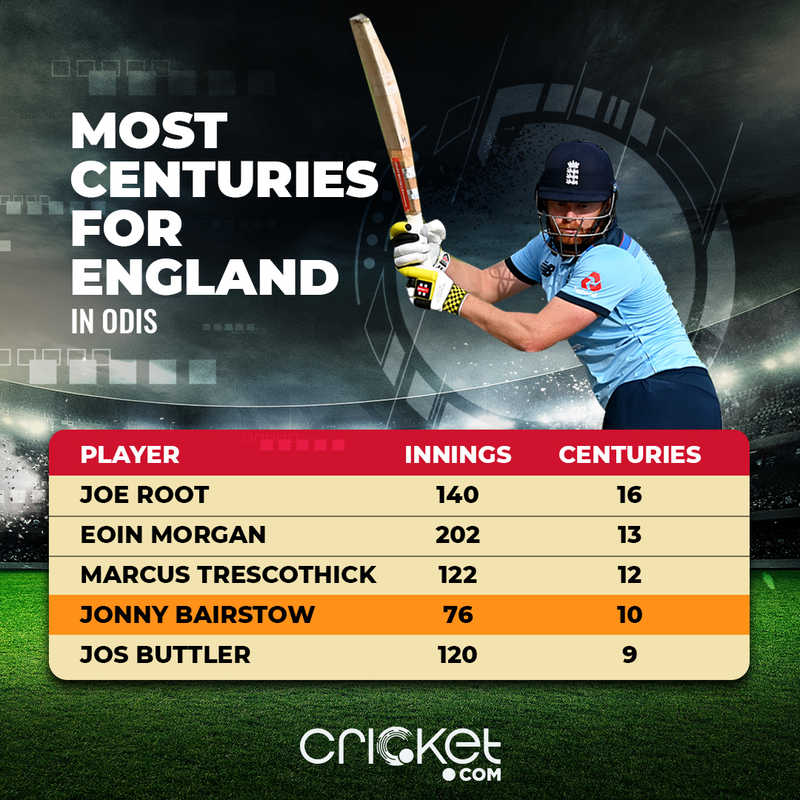 England ended the first Powerplay at 67 for 2, which they would have taken after losing two key wickets early on. However, Adam Zampa came into the attack right after that and struck with his second delivery to send Morgan packing for 23. The pair of Bairstow and Morgan is the seventh to post fifty for the 3rd wicket after losing the first two wickets with no run on the board.

Bairstow brought up his fifty off just 48 deliveries and looked determined to get a big score. Zampa struck again, this time dismissing Jos Buttler for just eight. Safe to say, Bairstow was going to be key. At the halfway stage of the innings, England reached 130 for 4 and were in need of a good partnership that would propel them to a competitive total. He got a reliable partner in Sam Billings, who took his time initially but then began to express himself. Billings was coming off a hundred in the first game and his partnership with Bairstow had given England a decent platform from where they could go on to get a formidable total.

Billings got to fifty and was going after the Australian bowling attack. First taking on Starc and then it was Zampa who bore the brunt. Zampa had the last laugh as he dismissed Billings for a well compiled 58-ball 57, bringing an end to a top-notch stand of 114 with Bairstow.

It took a special delivery from Pat Cummins to get rid of Bairstow for 112. Bairstow took 116 deliveries to get to his hundred which is the first time he has taken over 100 deliveries to reach his century. This was also Cummins' 16th wicket at the death. Only Mohammed Shami (20) and Mustafizur Rahman have picked up more. With Woakes and Tom Curran at the crease, England went past 250 and were looking to get to about 280-290 in the final five overs.

England eventually got much more than that, thanks to an unbeaten 53 off 39 from Woakes, which helped England score 53 from the final five overs and 82 from the last 10.

After winning the toss England elected to bat. They made just once change to their XI with Sam Curran making way for Mark Wood. Australia, on the other hand, retained the same side, which meant Steven Smith missed out once again.

Player of the match: Glenn Maxwell

Player of the series: Glenn Maxwell