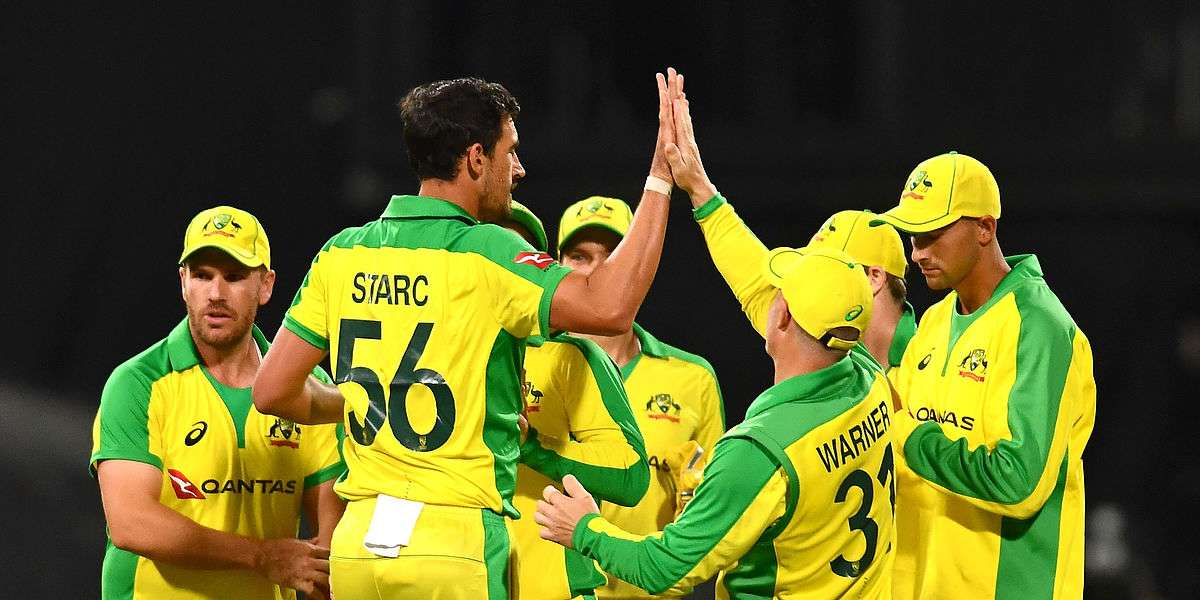 Australia may have lost the series, but regain their place at the top of the ICC T20I rankings

Mitchell Marsh turned out to be Australia's saviour as his composed 36-ball 39* took his side over the line in the third T20 International (T20I) over England at the Ageas Bowl, Southampton on Tuesday. Despite of this victory, Australia have lost the three-match series 2-1. After conceding the No. 1 ranking following the second game loss, Australia have now regained their status as the top-ranked side.

In pursuit of 146, Australia wasted little time to get going, smashing 16 off the very first over, bowled by Jofra Archer. Mark Wood was however able to remove Matthew Wade for 14 soon after that to give England an early breakthrough. Australia tried Marcus Stoinis at No. 3, in a bid to give him ample time in the middle get his eye in. He was off blocks immediately, punishing Chris Jordan, taking 12 from his first over.

Australia needed 98 runs more off 90 and with nine wickets in hand and they were clearly the favourites. The visitors ended the powerplay at 61 for 1, a vast improvement from the previous game, where they were reduced to 39 for 3 in the first six overs. Australia needed just over run-a-ball. England had a chance to get rid of Aaron Finch, but Jonny Bairstow dropped simple catch and gave the Australian captain a life at a time when England were desperate for a wicket. But Tom Curran had Stoinis caught at deep square leg for 26 couple of balls later.

Adil Rashid turned the game on its head, first getting Glenn Maxwell out for six and followed that up with the big scalp of Finch for 39 in the same over. While the required run-rate was well under control, Australia kept losing wickets in a hurry, just like they did in the first game when they were in pole position. Rashid once again picked up a wicket off the final ball of his spell, just like he did in the first game, dismissing Steve Smith for 3.

Australia had lost half their side now and needed 46 from the final seven overs. It was turning out to be a sense of deja vu for Australia as they lost the first game of the series from a similar position. Mitchell Marsh, playing his first game of the series, whacked Wood to the fence on a couple of occasions in the 16th over to relieve some pressure on himself and his team. Marsh then took it upon himself to take Australia home and Ashton Agar played the perfect second fiddle.

Their unbeaten 46-run stand for the sixth wicket off 39 deliveries was good enough to seal the match in the end.

Earlier, A clinical bowling performance saw Australia restrict England to 145 for 6. All the bowlers chipped in with at least a wicket and as far as England are concerned, only Bairstow (55) and a late flourish from Joe Denly (29*) saw them get close to 150. Dawid Malan and Moeen Ali chipped in with 21 and 23 respectively.

Australia got off to the perfect start with the ball as Josh Hazlewood, playing his first T20I in over four years, got Tom Banton caught behind. Mitchell Starc and Hazlewood kept things tight and did not let England get away to a flying start as the hosts managed just 19 runs in the first four overs. However, with the man in form Malan and the dangerous Bairstow battling it out for England, Australia could not afford to drop their guard down.

However, Bairstow was swinging, but not timing the ball as well as he would have liked to. England managed just 33 in the powerplay, which was their lowest since the World T20 Final 2016. The finally got some momentum when the picked up a couple of boundaries of Agar in the eighth over to bring up the team's 50.

Adam Zampa, who has struggled in the series so far, picked up the big wicket of Malan off his very first ball for 21 to break the 49-run stand for the second wicket. Luckily for England, Bairstow finally seemed to getting his timing back hitting the spinners for a couple of boundaries. Just then, Zampa picked up his second wicket, as Sam Billings reverse swept the delivery straight to Aaron Finch at first slip. Suddenly, Zampa, who had just a wicket to his name in the series at an economy rate of over 11, suddenly had picked up two.

Bairstow brought up his fifty off just 41 with a huge six down the ground off Zampa. But Agar removed him in the next over for 55, just when he looked to in total control. The stand-in captain Moeen (23), looked to be in good touch as he along with Joe Denly looked to steer England past the 150-mark, but Steve Smith took a good catch in the deep, just inside the boundary.

Three boundaries off Kane Richardson in the 18th over gave England a chance of breaching the 150 barrier, but they eventually fall five short.

Australia had won the toss and opted to bowl. Moeen filled in as England captain as Eoin Morgan was injured and Jos Buttler has left the bio-secure bubble to be with his family. Sam Billings and Joe Denly came into the side as a result. Australia, on the other hand, made three changes with David Warner, Pat Cummins and Alex Carey missing out.They were replaced by Wade, Marsh and Hazlewood.

The two teams will renew their rivalry in the three-match One-Day International (ODI), which is set to commence from September 11 at Old Trafford, Manchester.

Player of the match: Mitchell Marsh