Anderson adds to Pakistan's woes after England declare at 583/8 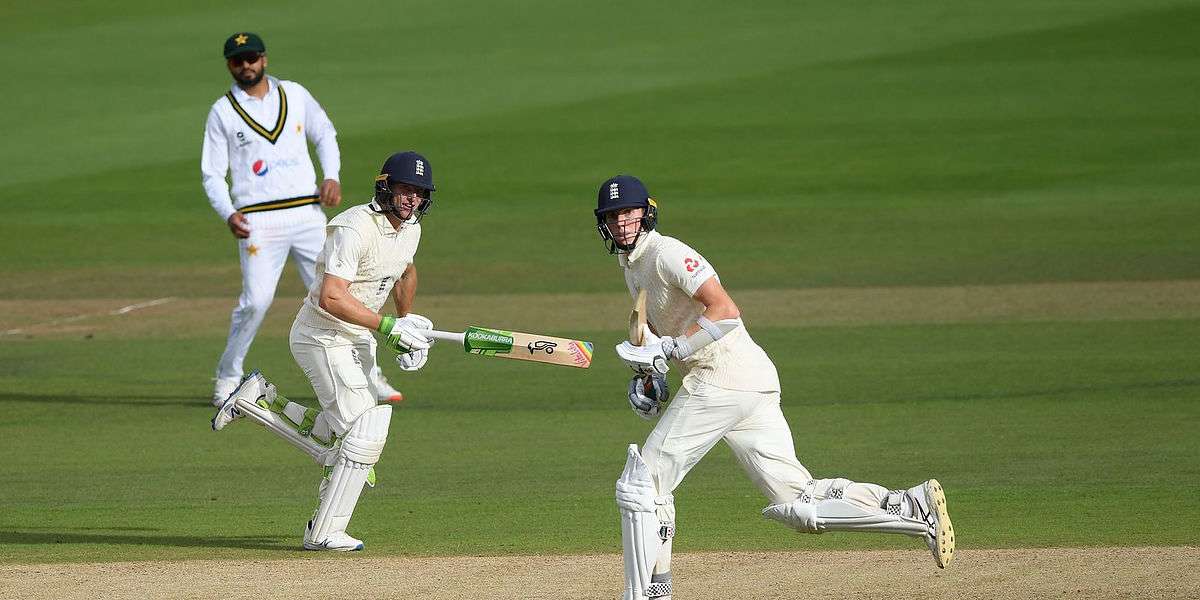 Anderson adds to Pakistan's woes after England declare at 583/8

After being on the field for close to 155 overs, Pakistan finally got an opportunity to bat, but it did not start well as Shan Masood was dismissed by James Anderson for the eighth time in Tests for four. After scoring 156 at Old Trafford, Masood's next three innings have read a sorry 0, 1 and now 4. To make matters worse, his opening partner Abid Ali too was dismissed for one, caught at slip off Anderson again. The English fast bowler had the final laugh when he trapped Babar Azam for 11 off the last ball of the day. He is now just four wickets away from 600 scalps. Pakistan have a mountain to climb in this match as they trail England by 559 runs and still need 360 more to avoid the follow-on.

This after England had earlier declared at 583 for 8 on Day Two of the third Test in Southampton. Zak Crawley (267) and Jos Buttler (152) were the stars of the show. The duo put on 359, which is the joint highest fifth-wicket partnership in Test cricket.

The Pakistan bowlers did not give an inch at the start of the day as England added to their tally only in the third over of the day after Shaheen Shah and Mohammad Abbas had bowled two tight overs. Pakistan had taken the second new ball as soon as it was available on Day One. With the second new ball, while Abbas has not picked up a single wicket since 2019, Shaheen is Pakistan's best bowler having picked up nine.

After a rain-free Day One, rains stopped play after 34 balls into Day Two for the first time in this match. Play finally resumed after 1 hour and 15 minutes and as a result, the lunch break too was put off by an hour. Abbas and Shaheen were much more disciplined with the ball on Saturday than they were with the new ball on Day One. The England batsmen found it difficult to score runs. However, after just 11 more deliveries, rain halted play again to add to the players' frustration.

The play resumed again shortly and Crawley got his first runs of the morning - off the 24th ball he faced - a flick towards mid-wicket into the fence. Buttler then had a scary moment when he was given out caught behind on 99, but it was reversed. He got his second Test century off the very next delivery, becoming the first wicketkeeper to do so since Jonny Bairstow in 2016.

England managed to add 41 more runs in the session and have further asserted their dominance in the match. England will now look to get a move on in the second session and close in on a score they are comfortable with so that they can declare and have a crack at the Pakistan batsmen. With weather a huge factor in the Test,a score of about 450 to 500 is what England will be chasing at this point.

England started off the second session quite well. Crawley reached his maiden First-Class double hundred and his partnership with Buttler was a record-breaking one for England. They now hold the record for the highest fifth wicket stand for England, going past 254 set by Keith Fletcher and Tony Greig. Crawley also went past 250 as England look to accelerate and put up a huge score on the board to ensure that they do not have to bat again in this match. The partnership between Crawley and Buttler has gone past 300 as well. The partnership eventually came to an end at 359 after Crawley was stumped down the leg side off Asad Shafiq for 267.

Buttler however continued to play well as England went into tea at 490 for 5. There could be some fireworks in the final session. England quickly went past 500 after tea and were looking to score some quick runs to force a declaration. Buttler perished for 152, thereby becoming only the third England wicketkeeper to score 150 inn Tests after Alec Stewart and Jonny Bairstow. However, there was still no signs of declaration from England even after Chris Woakes was dismissed for 40 and England had gone past 550.

Joe Root finally leaving a tired a tired Pakistan unit around 10 overs to bat for the day.