England vs South Africa – Will either of the perennial underachievers turn the tide?

England vs South Africa – Will either of the perennial underachievers turn the tide?

The much-awaited inaugural game of the 2019 World Cup is almost here.

Over the years, a lot has been written about South Africa’s failure to win the biggest prize in ODI cricket – the ICC Cricket World Cup. Not as much, though, about England – which, despite having invented the format, and hosted the tournament five times, has never managed a single win. The only reason England did not get the “chokers” tag hung around their necks is because no one expected much from them anyway.

In fact, when one thinks of the most memorable World Cup matches, one of the first games that comes to the mind is the semi-final between these two teams in 1992. The Sydney skies opened up and an outdated Rain Rule saw the South African team defeated and crestfallen at the absurdity of being given a “revised” target of 22 runs off one ball. Since then, the Protea story in the world’s premier ODI tournament has been Shakespearean in its tragic storylines.

Interestingly, that 1992 game was the last World Cup semi-final that England has been a part of, in the 27 years of the Cup. Finally, though, the creators of the ODI format look like a team that can go all the way.

A late RSVP to the ODI party

After a shocking exit in the league stage of the 2015 World Cup England, led by the Dublin-born Eoin Morgan, have turned a corner in the 50-over format. As discussed in our team preview, the hosts for the tournament have the highest win percentage among all teams since the last World Cup.

While that’s all good, how significantly will we see history weigh on the hosts? The last time they reached the last four of a World Cup, their star wicketkeeper-batsman Jos Buttler was a year old and their latest fast bowling sensation Jofra Archer wasn’t even born. Yes, it’s been that long!

The lack of buzz around the Proteas

Before nearly every World Cup since their return to international cricket, the South Africans have been considered one of the favourites. This time, though, there seems to be lack of buzz around Faf du Plessis’ side.

One of the biggest reasons could be the retirement of AB de Villiers. A player who’d probably be the first pick if there was a casting for cricketers in a superhero movie, de Villiers is a big loss – but there is no lack of world-class talent in the team from southern Africa.

Hashim Amla, Quinton de Kock, Dale Steyn, Kagiso Rabada, Imran Tahir and the captain du Plessis himself are some of the finest cricketers going around right now. Yet, why are their chances downplayed so much?

Amla, who is a vital part of the unit, has averaged 39.6 since the 2015 World Cup, which is 10 lesser than his career average. On the other hand, there’s Steyn whose injuries over the last few years have been the cause of much worry across formats for the South Africans.

Another area of concern for the Proteas will be the past performances of three of their senior batsmen – Amla, de Kock and JP Duminy – in ICC ODI tournaments. The averages of all three batsmen drop significantly when it comes to the big time.

No team has scored at a quicker rate than England since the last World Cup. Among the teams that have played ODI cricket since the 2015 tournament, the Morgan-led side are the only ones to score at over a run-a-ball.

Despite the prowess of the England batting, if there is one bowling line-up the hosts will be wary of, it would be the one from South Africa. The fast bowling attack will cause jitters in any batting line-up and with the experienced leg-spinner Tahir in the team as well, the Proteas have the bowling firepower most teams can only dream of.

It’s tough to find weaknesses in the South African bowling juggernaut, but if there’s one, it is their record against left-handed batsmen. The bowling averages of the quick bowlers drop drastically when they bowl to southpaws. 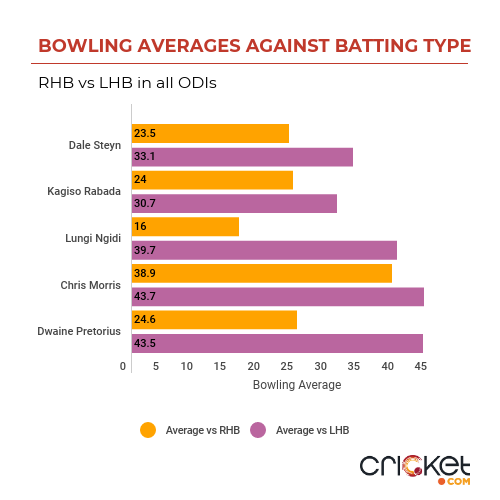 As a result, the left-handed trio of Morgan, Ben Stokes and Moeen Ali could be crucial to the hopes of the three-time World Cup finalists in this game.

A factor that been consistent through the years in England has been the weather. It’s expected to be a cloudy day in London on Thursday with a few showers in the morning. This might encourage the captain winning the toss to bowl first and make use of the cloud cover early on in the game.

England go into their home World Cup with nearly all their players capable of making useful contributions with the bat. In a closely-fought match, the lower-order could make all the difference for Morgan’s team.

South Africa’s showing in this match and at the World Cup could depend heavily on the performances of their middle-order as they look to fill the huge boots left behind by the retirement of de Villiers.

Pace ace Steyn is ruled out of the game due to injury and his replacement is likely to be either Chris Morris or Dwaine Pretorius, who will add more firepower to the batting.