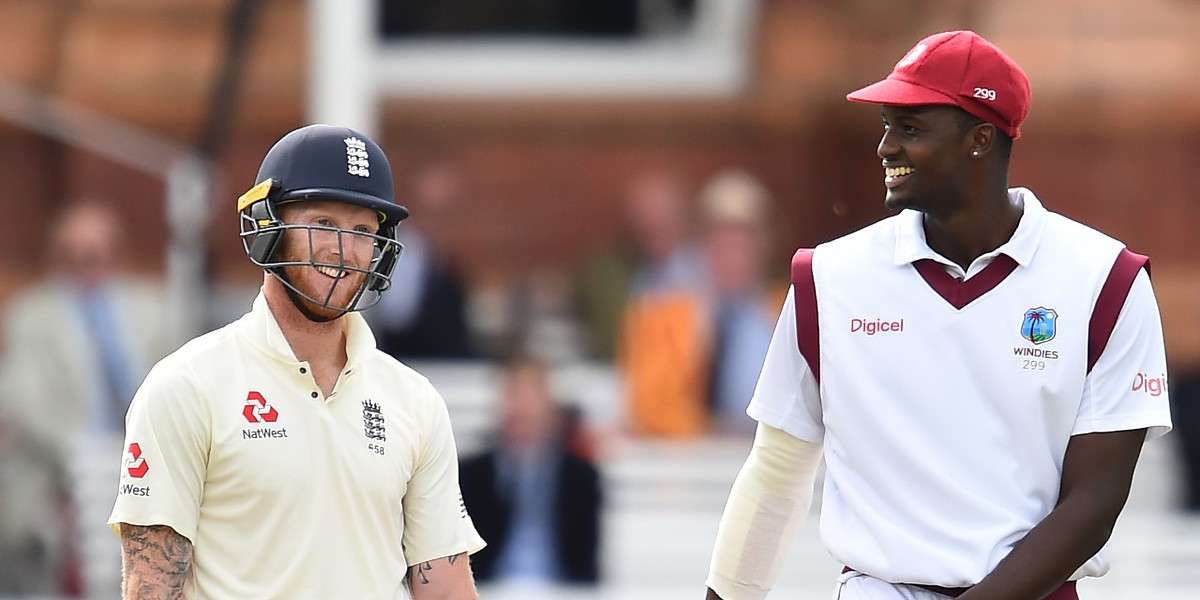 Here are some tips that might help you in creating your fantasy teams for the first Test between England and West Indies, in Southampton

It’s been close to four months since international cricket was last played. But, amidst this global pandemic the one sliver of shining light is that Test cricket is finally back! Sans the fans, England will take on the West Indies, in the first Test of the three-match series. At stake is the Wisden Trophy which is set to begin at the Ageas Bowl, in Southampton.

On paper, England ranked fourth in the ICC rankings going head to head with eighth-ranked West Indies might seem a mismatch. But, with a strong fast bowling arsenal and being the current holders of the Wisden Trophy makes West Indies the strong contenders.

There will be typical English weather conditions on display during the first Test – cloudy, dull and with some showers expected throughout the course of the five days. The temperature is expected to hover around the lower 20 degree range on average.

Southampton has hosted a solitary Test in the last five years, India v England in 2018. However, it garnered a lot of praise at the time for dishing out a surface that had something in it for both batsmen and bowlers. Though, the latter did hold the upper-hand.

There are seven Test venues in England that have hosted a Test match since the start of 2018. Among them, Southampton has been the third-best for bowlers in terms of average and strike-rate. They have managed a wicket here every 49.1 balls averaging 24.4 runs per wicket.

Considering the overhead conditions and the fact that the surface is freshly laid with no action on it for a few months, packing your side with fast bowlers and all-rounders should be imperative. 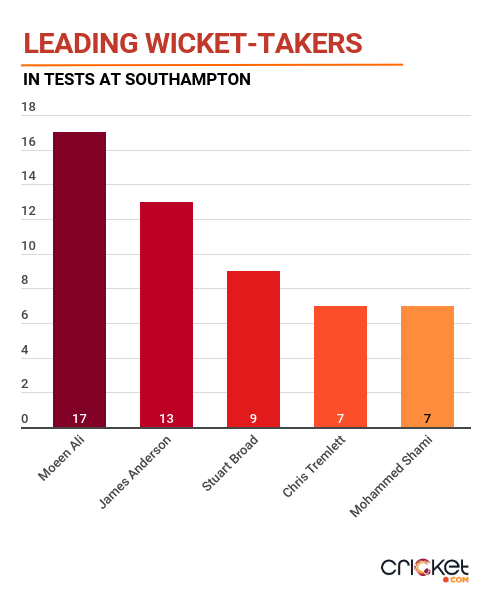 On the bowling front, while there is not a lot to differentiate between pace and spin in terms of average and bowling strike-rate, the fast bowlers have picked up 65.7 per cent of the wickets to fall here. 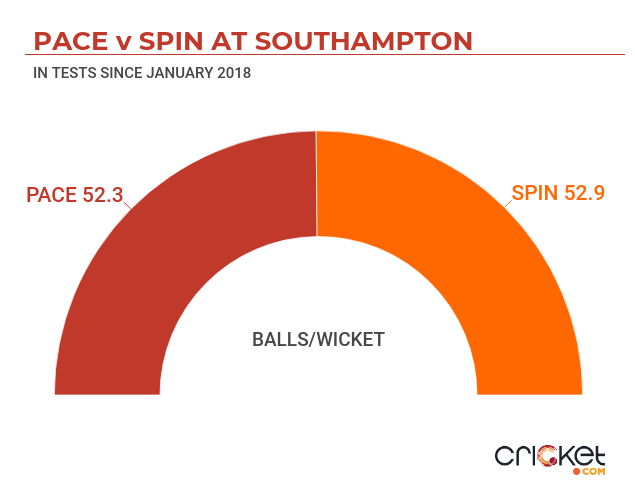 Both England and West Indies have named pace-heavy squads for the first Test carrying only one specialist spinner each. While England have gone with Dom Bess, West Indies have Rahkeem Cornwall in their ranks. Four out of the top five leading wicket-takers in Tests at Southampton are pacers with James Anderson and Stuart Broad second and third on that list.

With chances of movement, given the conditions, you should ideally have the likes of Kemar Roach, Jason Holder, Anderson and Jofra Archer in your side.

There could be a few interesting battles on display too especially revolving around Anderson. He loves bowling against West Indies and in particular to Brathwaite who he has dismissed 7 times in 18 innings. 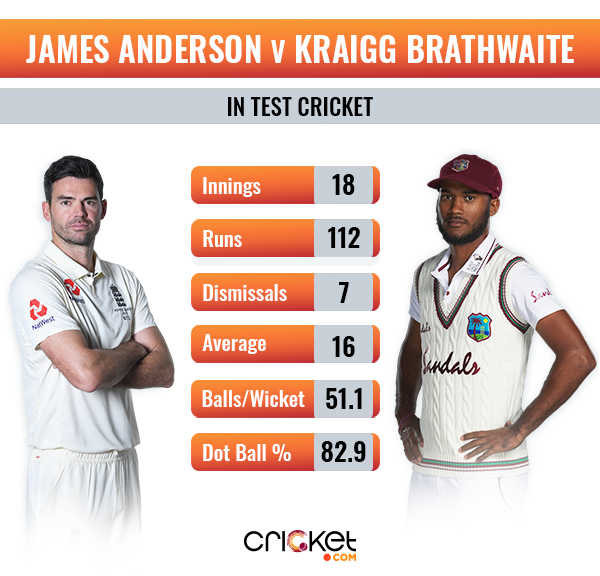 Anderson has an excellent record against Shai Hope too with 4 dismissals in 9 innings. 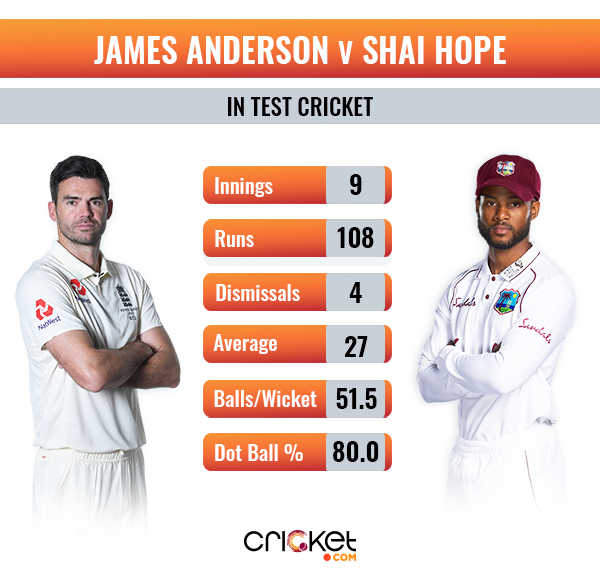 Jos Buttler will have to be careful against Roach against whom he averages just 11. 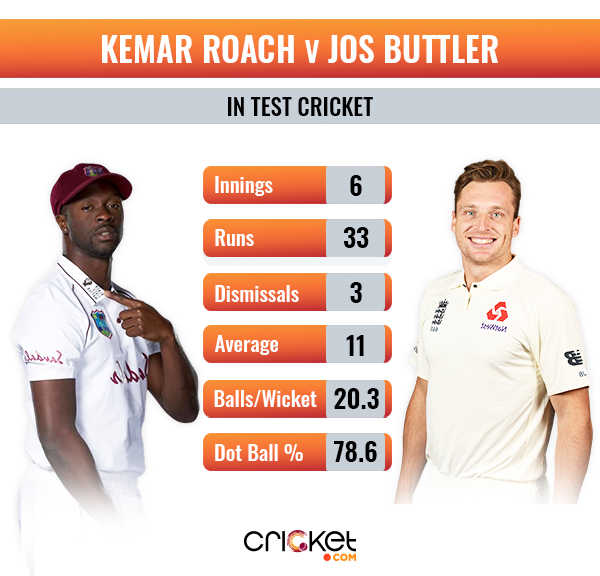 Another interesting battle will be between Shannon Gabriel and Ben Stokes. The fast bowler has proven to be a handful against Stokes in the past having dismissed the England captain 4 times in 8 innings in Tests. 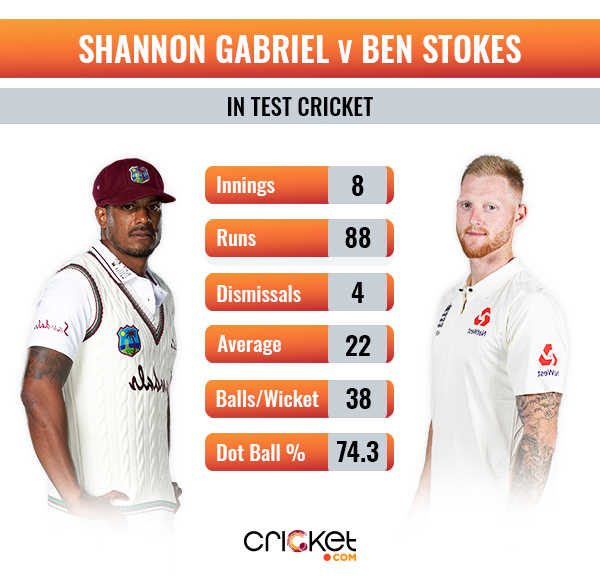 While he is handful in most conditions, give Anderson a Dukes ball under cloudy skies and he becomes a wicket-taking machine. Considering the conditions are going to be similar in Southampton, Anderson will once again be expected to deliver the goods. His record in Tests in England are par excellence. In 40 innings since 2016 in the country, he has picked up 102 wickets striking every 39.7 balls. He needs just five more wickets to become England's leading wicket taker against the Caribbean nation in Tests. In the last few months, Anderson has often stated that the break has helped him in regaining fitness, so watch out West Indies! 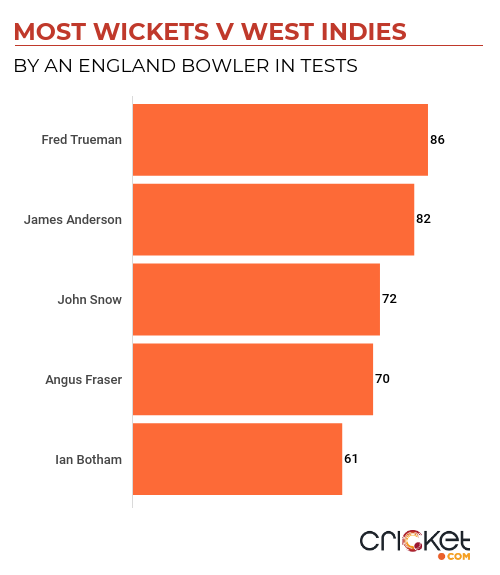 Kemar Roach loves a contest and in England he will get one, for sure. In the last few years, Roach has transformed into a fast bowling beast and that is showing in his numbers. He has picked up 71 wickets in the last four seasons for West Indies at an impeccable strike-rate of 46. He loves bowling against England too as his average of 26.6 and strike-rate of 48.5 in Tests suggests. Roach was named Player of the match when England last visited the Caribbean in early 2019 and will want to put a similar show this time around too.

Placed third in the ICC Test rankings for bowlers and No.1 in the all-rounder’s list, Jason Holder is probably one of the most underrated cricketers in the world. But, one look at his record will show how big an asset he is to the West Indies side. Since January 2018, Holder averages 42.5 with the bat and 14.2 with the ball in 11 Tests. If those numbers are not astounding enough, Holder has the best bowling strike-rate in Test cricket since the start of 2018 for a minimum of 50 wickets, that of 34.1. No other West Indian bowler has more wickets than Holder’s 53 in the last two years. On the batting front he is the second-highest run-getter for his side during the time-frame with 680 runs, only behind Shane Dowrich. England will want to take Holder lightly at their own peril.

Ben Stokes is renowned for making things happen, be it with the bat, ball or in the field. And now with the captain’s hat on, Stokes will be keen on setting the ball rolling with a win. 2019 or otherwise known as Stokes’ summer was one where the all-rounder showed his true potential. Averaging 47.39 with the bat and 32.6 with the ball, Stokes has been on a roll in the last year and a half. There will be additional responsibilities but that is what eggs Stokes on and he will want to prove his detractors wrong about him being as good a captain as any other in that first Test in Southampton.

Who should you pick in your side for the first Test in Southampton?

We are going with a combination of four frontline batsmen in our side including the wicket-keeper, three all-rounders and four fast bowlers.