England will not panic in their attempt to get campaign on track, insists Morgan

England will not panic in their attempt to get campaign on track, insists Morgan

The hosts started their bid to win their first-ever World Cup with a comprehensive 104-run victory against South Africa before they stumbled in their second game, losing by 14 runs.

Eoin Morgan says England will not panic as they attempt to get their World Cup campaign back on track against Bangladesh following their chastening defeat against Pakistan. The hosts started their bid to win their first-ever World Cup with a comprehensive 104-run victory against South Africa before they stumbled in their second game, losing by 14 runs. Captain Morgan said England would not change their aggressive approach in Saturday’s match in Cardiff. England’s tactics have been based on fearless attacking from their powerful batsmen and they are also aggressive as a bowling unit, boasting the pace of Jofra Archer and Mark Wood.

“All we talked about is sticking to what we do well, looking at our strengths,” he said in his pre-match press conference in the Welsh capital on Friday.

“Previous to the tournament starting we talked about losing games -- how would we react? What would we counter that with?

“Everything comes back to focusing on ourselves, how we win games of cricket and get the best out of ourselves.”

England rotated their attack at Trent Bridge, bringing in Mark Wood for Liam Plunkett. Conditions are expected to be more seamer-friendly in Wales, meaning Plunkett could return in place of a spinner. “We’ll see another day where the wicket is under covers,” Morgan said. “The pitches here have been a bit greener and more seamer-friendly so that’s a potential (option), yeah.”

Bangladesh, who have beaten England at the past two World Cups, are in a similar position to England, having followed a win over South Africa with a loss to New Zealand “It is going to be a difficult game, they’re a good side. I think people underestimate them but we certainly don’t,” Morgan said.

“Their senior players especially have played a lot of games, more so than our senior players. They are a threat but hopefully we can play well and overcome it.” 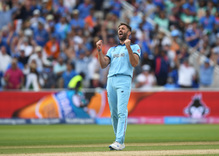