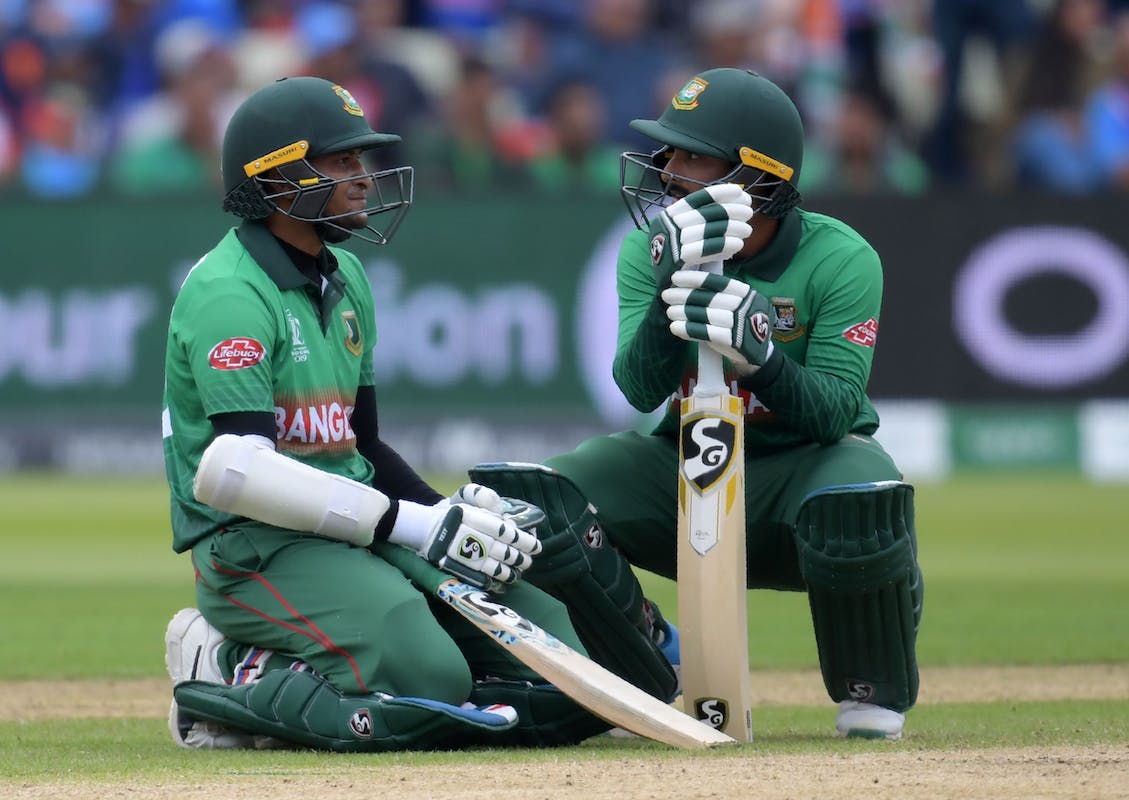 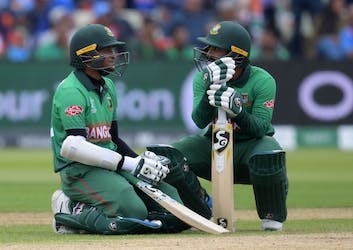 Bangladesh will kick-off their 2022 T20 World Cup campaign on Monday, facing the Netherlands at the Bellerive Oval in Hobart. It is the first Super 12 match for both sides. Netherlands, however, qualified through the first round and possesses some handy match practice heading into this fixture. The Dutch will fancy their chances because of Bangladesh’s poor T20I record since the last World Cup (only 4 wins in 14 matches).

The Bellerive Oval has already hosted seven games in this T20 World Cup.

It has to be said that the venue has proven to be a decent batting surface. The average first innings score in this T20WC in Hobart has been 153, with teams passing the 160-run mark thrice. The 176/5 posted by Scotland against Ireland is the highest first-innings total at the venue this T20WC but that, incidentally, was chased down by the Irish with an over to spare.

There’s nothing to look at from a toss point of view. Of the six games, teams chasing have won four games.

There is not too much to read into the bowling numbers either. Pacers have taken 62.5% of the wickets but that’s only because they’ve bowled a greater proportion of overs (64.7%). The quicks have been more expensive than the spinners (7.8 compared to 6.9) but you expect that, given it’s the quicker men that bowl up-front and at the death. 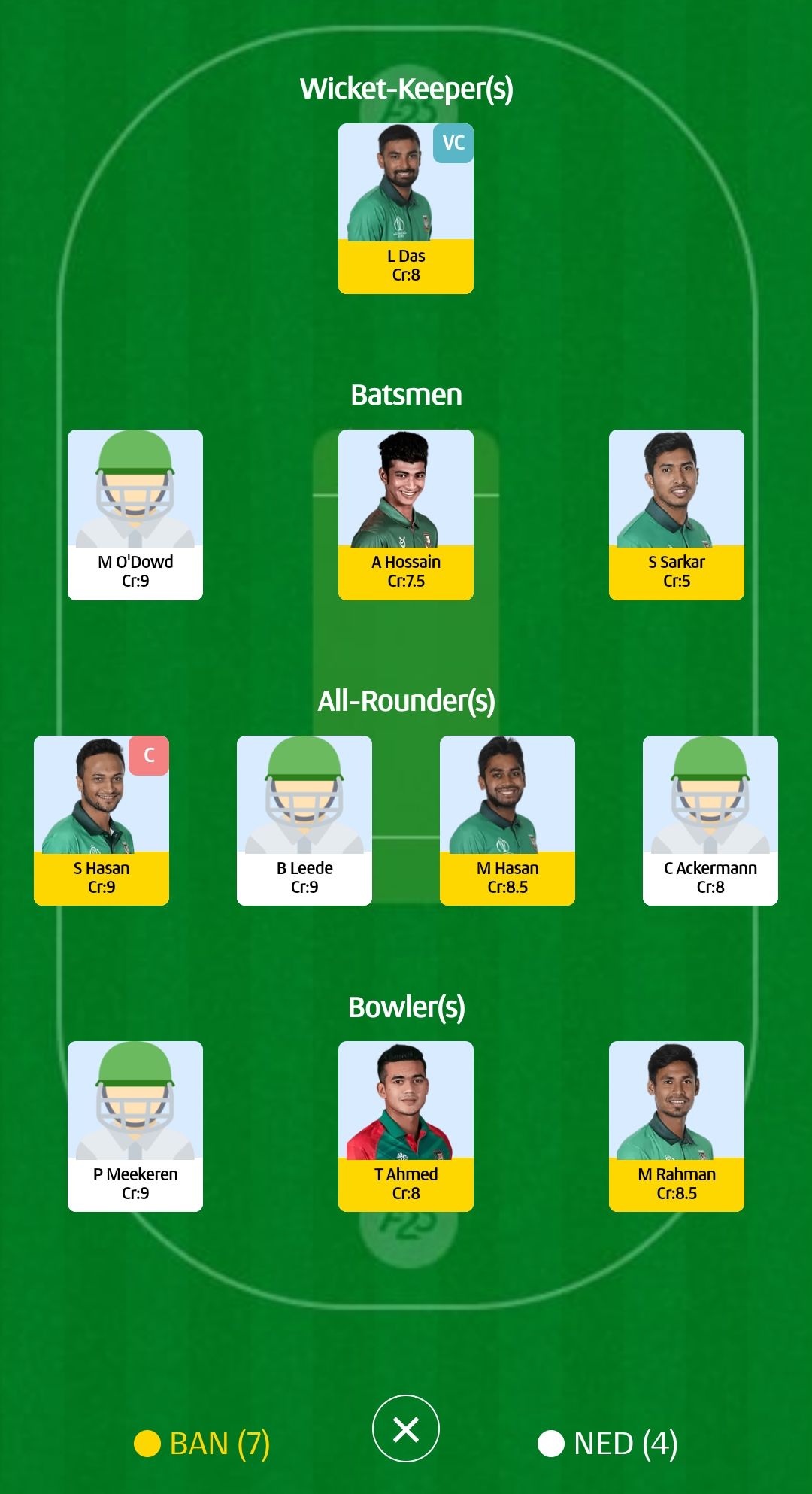 - Liton Das is Bangladesh's highest run-scorer this year - 417 runs at an average of 29.8 while striking at 139.5. He bats in the top-order which makes him an ideal captaincy or vice-captaincy candidate.

- Shakib Al Hasan is the most obvious Fantasy captain whenever Bangladesh is playing. He is an optimal T20 all-rounder who is an important cog with the bat and also bowls all his four overs in most games. In T20s this year, Shakib averages 27.3 with the bat for his 683 runs. He will be more crucial with the ball given an RHB heavy batting of the Netherlands. Overall, Shakib has 29 wickets in 26 T20s this year at an economy of 6.5. He is a goldmine of Fantasy points.

- Bas de Leede has already won two player-of-the-match awards in this World Cup. He bats at three and bowls military medium at the death, making him another prominent all-rounder in this match. He averages 57.8 in 10 T20Is this year. With the ball, he has 17 wickets in these 10 games. The numbers clearly show he is an undroppable player.

- Bangladesh have several left-handers in their batting line-up. That might negate the Netherlands’ spinners who are both left-arm orthodox - Tim Pringle and Roelof van der Merwe.

- Roelof van der Merwe is a doubtful starter. He played the previous game - against Sri Lanka - almost on one leg. In case he is rested, one among Logan van Beek or the leg-spinner, Shariz Ahmed can be featured in the XI.

- Colin Ackermann’s part-time off-spin can be handy to counter Bangladesh’s LHB heavy line-up. He has the best bowling figures in T20 cricket - 7/18. His form with the bat has not been great but he is a player of great utility in this fixture.

- Afif Hossain isn’t much behind Liton in terms of run-scoring. He is the second highest run scorer for Bangladesh this year (405 runs at 31.2 runs per dismissal). Afif has excellent numbers against spin. With Netherlands set to field at least one left-arm spinner, Afif has a great chance of success in this game.

- Paul van Meekeren is Netherlands’ quickest bowler with the ability to crank up 140 kph on the speed-o-meter. Considering Bangladesh’s struggles against pace, Meekeren can prove to be a handy asset.

- Mustafizur Rahman is undergoing a tough year in T20 cricket. He averages 42.4 runs per wicket this year in T20Is, as compared to 17.4 and 21 in the last two years respectively. 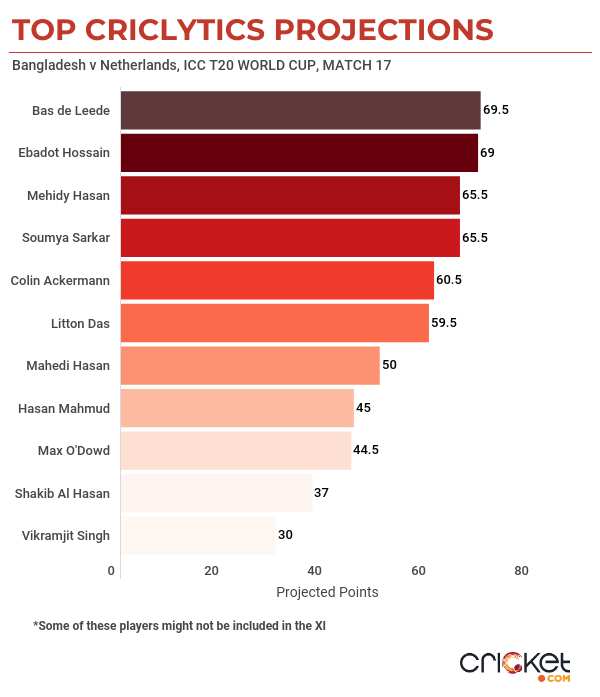