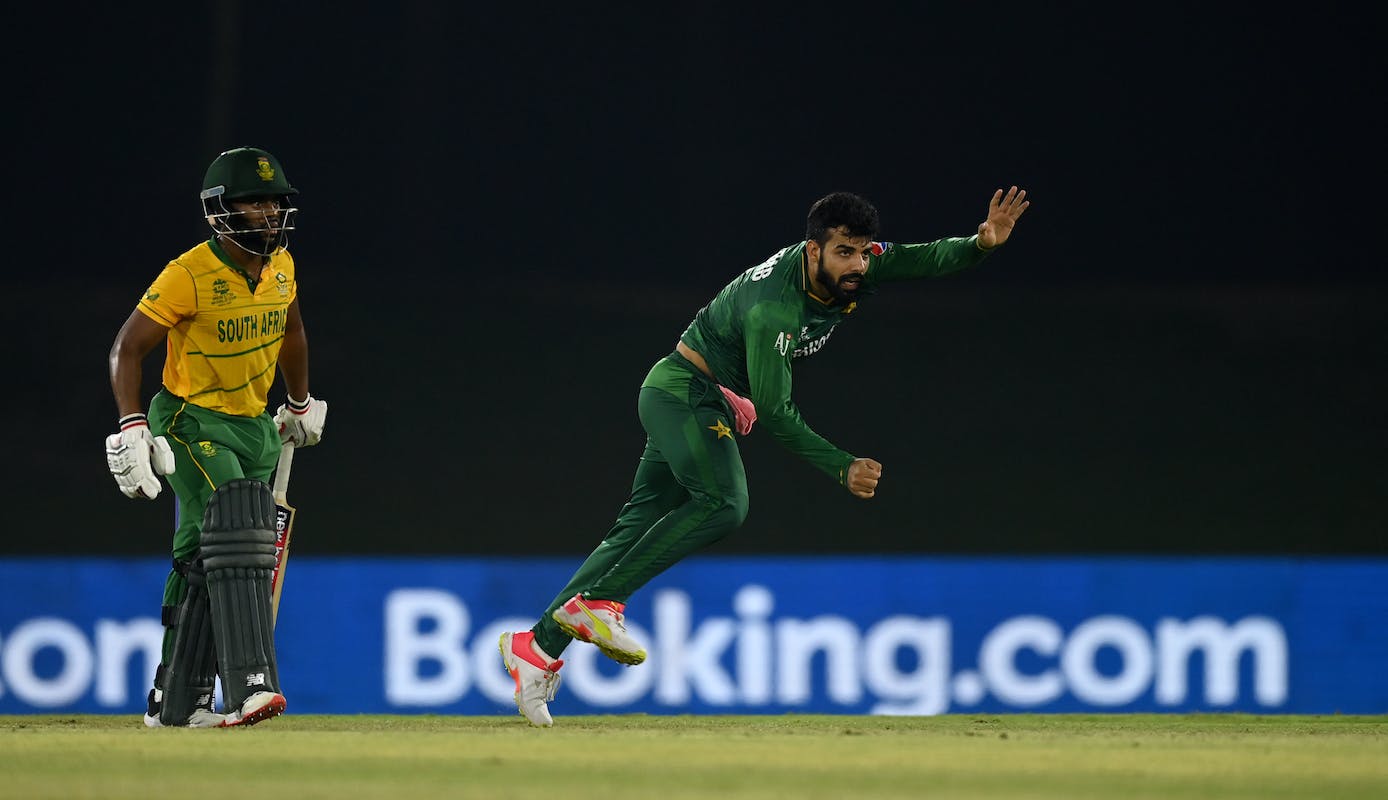 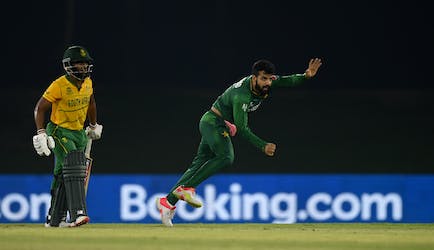 Pakistan will lock horns with South Africa in Match 24 of the Super 12 in the ICC Men’s T20 World Cup 2022. The match will take place at the Sydney Cricket Ground (SCG). It is a do-or-die game for Pakistan. Placed fifth in the Group 2 table with only one win in three games, Pakistan need to beat the Proteas to stay in the hunt for the semi-finals.

Pakistan’s clash against South Africa on Thursday will be the fifth game at the SCG this World Cup. And each of the first four matches have followed an eerily similar pattern: the team batting first putting on a gigantic score and decimating the opponent with the ball.

All four games at the SCG have been won by the team batting first, with the margin of victory being 89 runs, 104 runs 56 runs and 65 runs respectively. The 200-run mark has been breached twice in four attempts.

So given just how clear the pattern has been, expect the captain winning the toss to be batting first tomorrow. No doubts about that.

As far as bowling is concerned, spin has been far more effective than pace. The economy, average and strike rate for the spinners reads 7.1, 18.4 and 15.5. This is significantly better than the subsequent figure for the pacers: 8, 24.2 and 18.1.

However, Mohammad Nawaz has the negative match-up of three left-handers in the opposition. South Africa, on the other hand, possess a pace-heavy bowling setup, with Keshav Maharaj being a defensive spinner and Tabraiz Shamsi uncertain to get a place in the XI. Hence, despite spin-friendly conditions, a pace-heavy attack should be the way to go in this game. 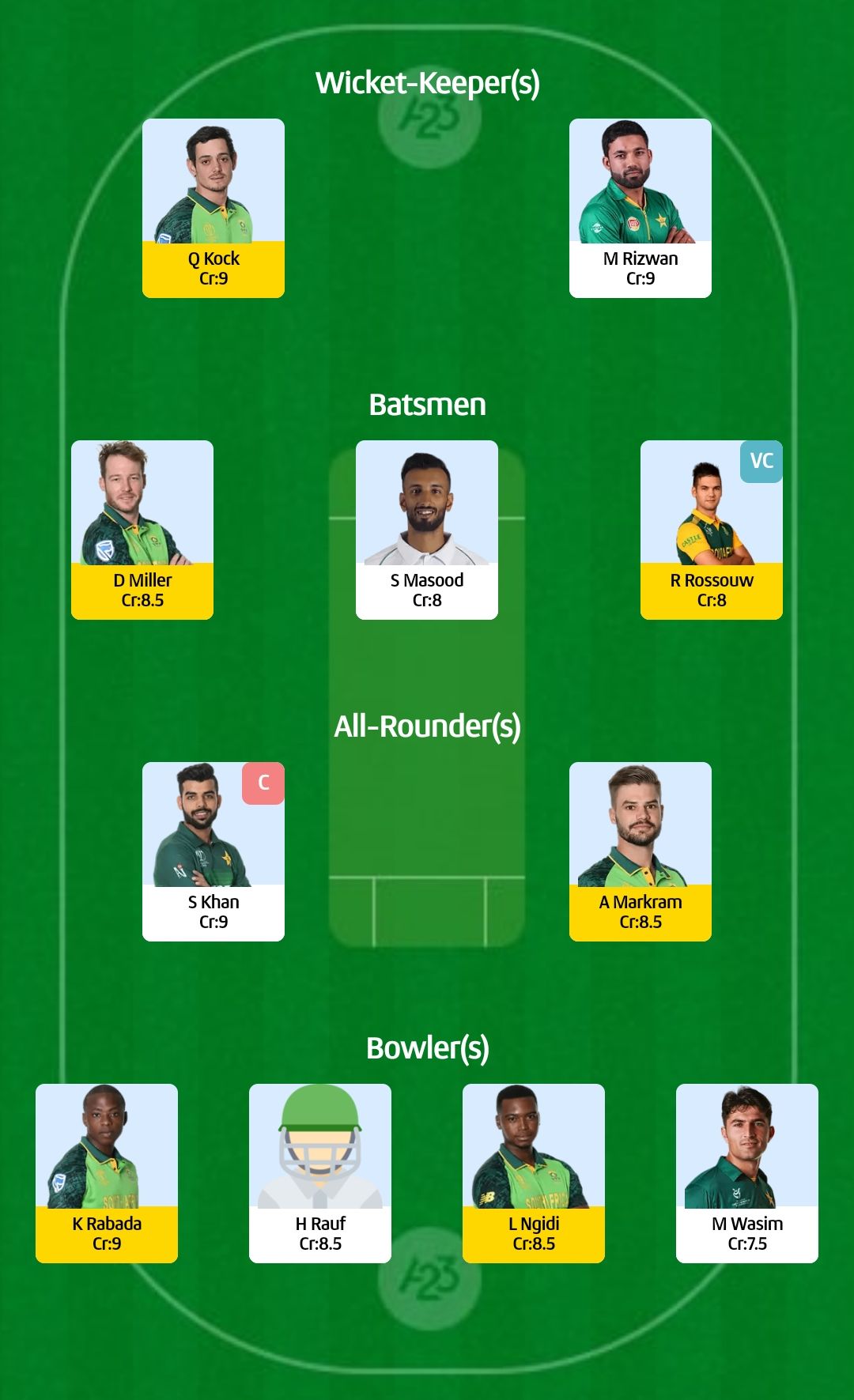 - Shadab Khan, the all-rounder, has all the credentials to lead your fantasy fortunes in this match. He has 20 wickets in 16 T20Is this year at 20.8 runs apiece and an economy of 6.7. The spin-friendly SCG surface and a batting spot in top five make us look past Shadab’s underwhelming numbers against left-handers.

- Rilee Rossouw has a brilliant record at SCG in white-ball cricket. He scored a match-winning 109 against Bangladesh at the same venue a week ago. Rossouw also has two fifties in two ODI matches he has played at the SCG. Interestingly, Rossouw’s last five T20I scores are 0, 109, 100*, 0, 0.

- Openers in the first innings at SCG average 37.6, the second highest among all venues thus far.

- Both Babar Azam and Mohammad Rizwan have played 10 T20Is each against South Africa. However, none of them have ever faced any of the four prime Protea pacers in the format.

- Among the 40 batters from Top 10 sides who have scored 300 runs or more this year, Miller has the highest batting average of 68.8.

- Haris Rauf has 27 wickets in 2022 19.4 runs per scalp while Lungi Ngidi has struck 21 times this year at 13.7 runs per wicket. Both are the highest wicket-taking pacer for their respective sides.

- Shaheen Shah Afridi has struggled in this World Cup, picking only one wicket in three games.

- Babar Azam has struggled to get going in this tournament with only 8 runs across three innings. However, considering the batting-friendly conditions and lack of swing for the new ball bowlers in Sydney, Babar can be trusted to get back in touch for this crucial do-or-die game.

- With 15 scalps in 11 matches, Wayne Parnell is enjoying his most productive year in T20 cricket. His slower ones are worth banking on if you are eyeing big bucks.

- Three left-handers in South Africa’s top five means more bowling exposure for Iftikhar Ahmed. Hence, he becomes another all-rounder you can play a punt on. 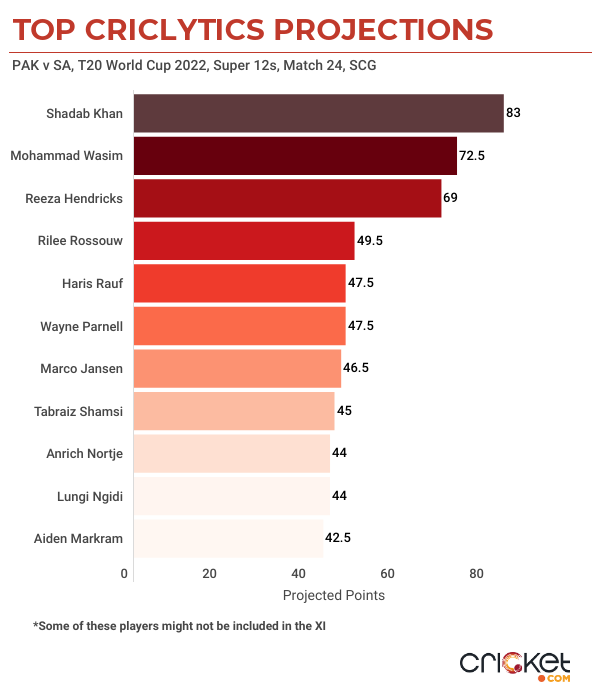