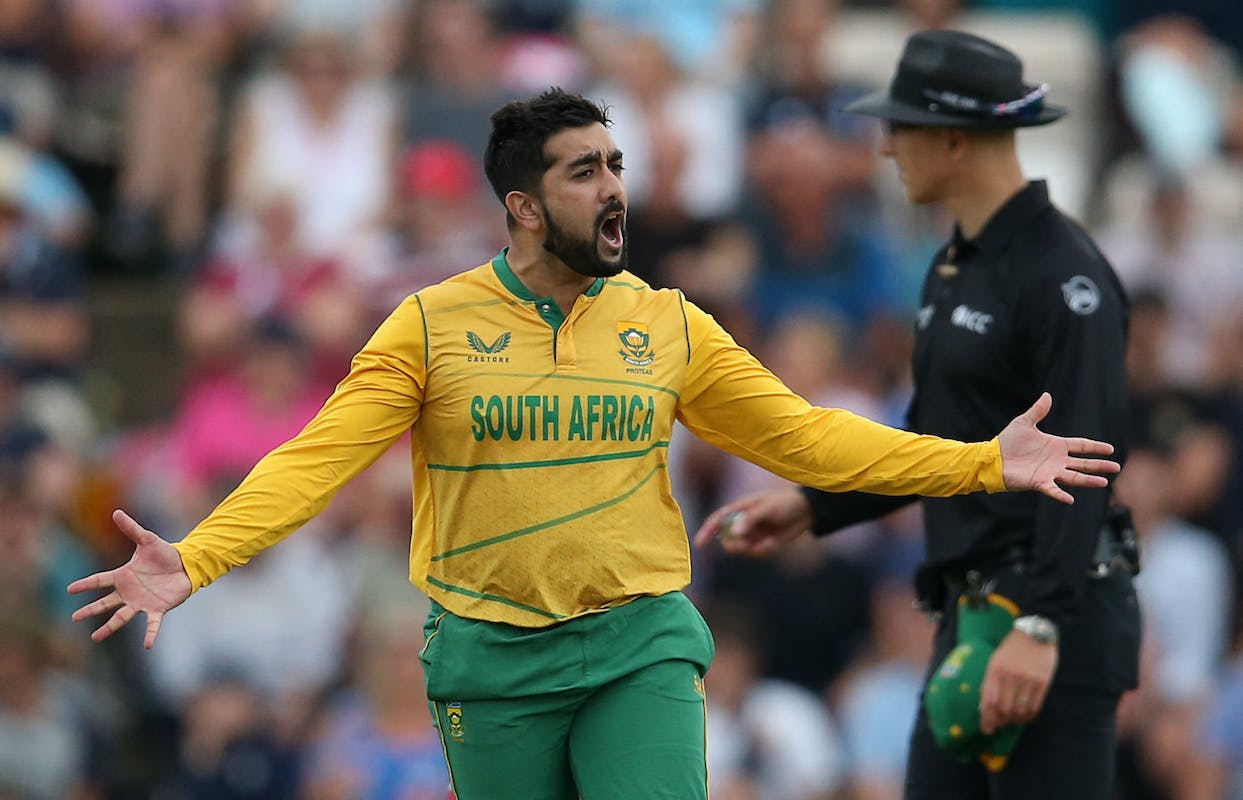 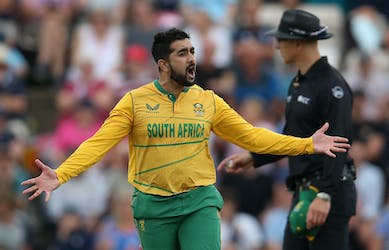 Reeza Hendricks starred with the bat for the Proteas with 70

Tabraiz Shamsi's maiden five-wicket Twenty20 international haul sealed South Africa's 90-run thrashing of England on Sunday as the Proteas completed a 2-1 series win. The 32-year-old left-arm wrist-spinner took 5-24 as England, set 192 for victory, collapsed to 101 all out with 20 balls to spare at Southampton after losing their last eight wickets for 49 runs.

Earlier, in-form South Africa opener Reeza Hendricks hit 70 -- his third fifty of the series -- and Aiden Markram made an unbeaten 51 as the Proteas posted a competitive 191-5.

Recalled left-arm quick David Willey took 3-25. Shamsi's haul was all the more impressive given his expensive return of 0-49 in England's series-opening win in Bristol.

But South Africa have been much improved in the field since that 41-run defeat and this win gave them a first T20 series success in England, as well as their first white-ball bilateral series victory in the country since 1998. By contrast, defeat left England still searching for a first series win under new white-ball captain Jos Buttler following one-day international and T20 reverses against India and a drawn ODI campaign with the Proteas.

Jonny Bairstow (27) was the only England batsman to make more than 20, but Buttler and white-ball coach Matthew Mott do have at least seven matches at this level scheduled in Pakistan in September in which to turn things around before the T20 World Cup in Australia.

England's chase suffered an early setback when Buttler was out for 14, caught at short third man off spinner Keshav Maharaj.

The out-of-form Jason Roy fell for 17, caught behind off Anrich Nortje -- in after South Africa decided against risking fellow fast bowler Kagiso Rabada's injured ankle ahead of next month's three-Test series in England.

And when Moeen Ali was brilliantly caught one-handed by a leaping Tristan Stubbs off part-time spinner Markram, the hosts were 59-4. Shamsi then cleaned up Liam Livingstone before taking two wickets in two balls, with Sam Curran caught in the deep before Willey was clean bowled.

Chris Jordan survived the hat-trick only to be lbw to Shamsi. Adil Rashid holed out off Shamsi before Maharaj ended the match when he dismissed Bairstow with the aid of a catch by David Miller -- a memorable way for the South Africa captain to finish his 100th T20 international.

England's decision to recall Willey in place of Richard Gleeson reaped an early reward when he had potential dangerman Quinton de Kock chopping onto his stumps for a three-ball duck.

But South Africa recovered, with the Proteas 53-1 at the end of the powerplay. Hendricks completed a 42-ball fifty and he then upped the tempo with three boundaries in a 16th over bowled by Curran.

He was eventually well caught by wicketkeeper Buttler off the expensive Jordan (1-52). But Markram, back in South Africa's T20 team for the first time since last year's World Cup, having first provided solid support, went on to a 36-ball fifty before Miller chipped in with a quickfire 22.