From Lloyd to Dhoni, a look at phenomenal performances on the biggest stage

Every four years, 22 men vie for the ultimate laurel in cricket, the ODI World Cup, with the weight of their expectant nations on their back. While such contests pit teams, as units, against each other, every so often one individual rises to the occasion and perform prodigies that become the grist of everlasting memory. Here is a short-list of such men who, for a day, became heroes and scripted stories that endure: 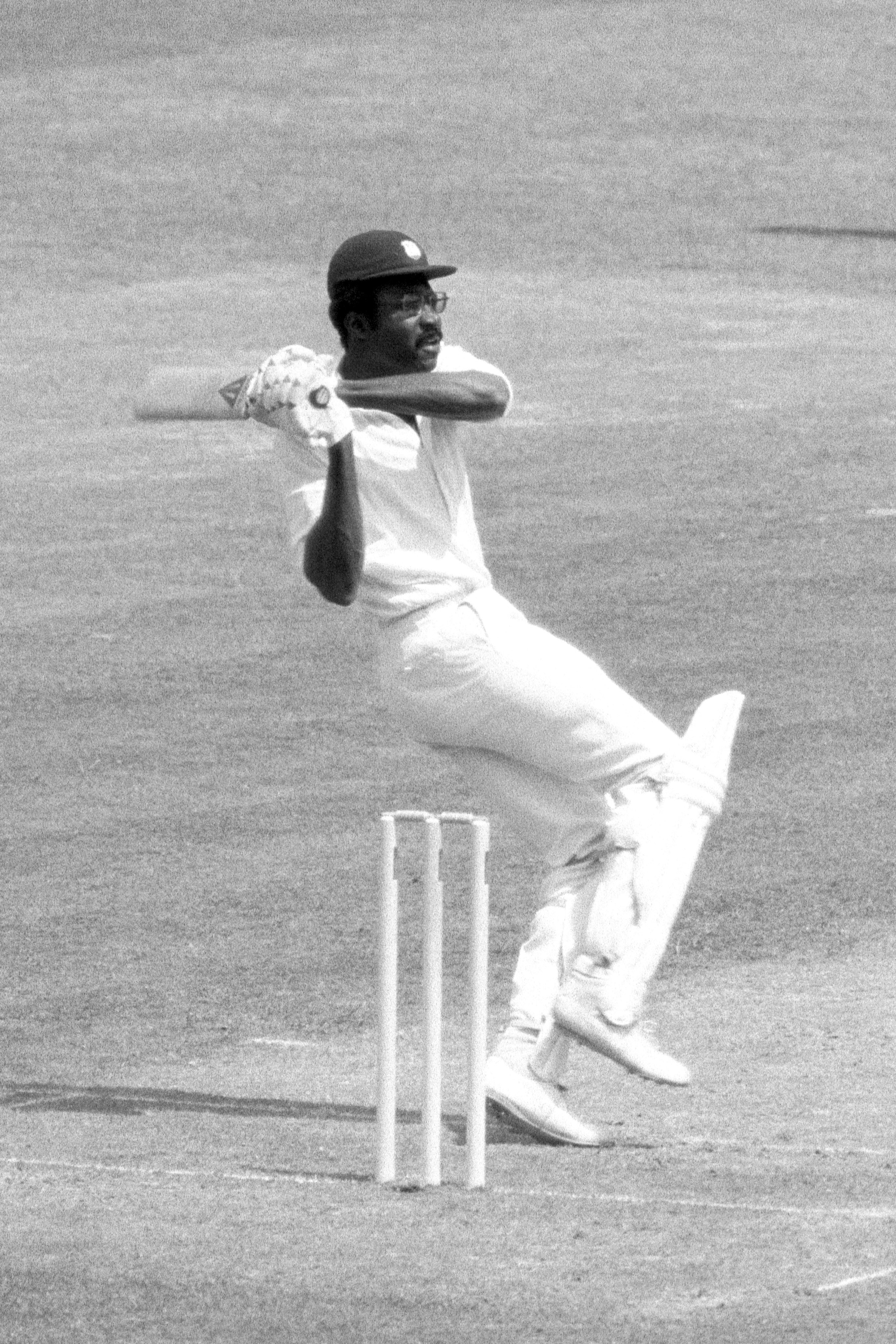 Viv Richards was a talent in the making, Rohan Kanhai a legend on the wane, and the West Indies were up against an Australia led by Ian Chappel, spearheaded by Dennis Lillee and Jeff Thompson, and boasting Gary Gilmour as the unexpected X factor.

Into this cauldron, with his team struggling at 50/3, stepped Clive ‘Supercat’ Lloyd – all dangling limbs, slouching gait and slashing blade, to launch a devastating attack that saw him score 102 off just 85 balls; the kind of score that is par for a top batsman today, but back then, when ODIs were played in the cautious, attritive manner of mini-Tests, a stunning example of warp-speed run-scoring studded with 12 fours and two sixes.

With Kanhai harnessing his experience in a supporting role, Lloyd played the knock that decided the ultimate outcome. When he was out, with the score reading 199, four other top batsmen had managed just 97 between them.

Batting in his slipstream, a late charge by Keith Boyce pushed the total to 291 for eight from their stipulated 60 overs – and with that kind of cushion the famed Windies pace quartet, aided by the pantherish fielding of the young Richards at cover, had the elbow room they needed to close out the game. 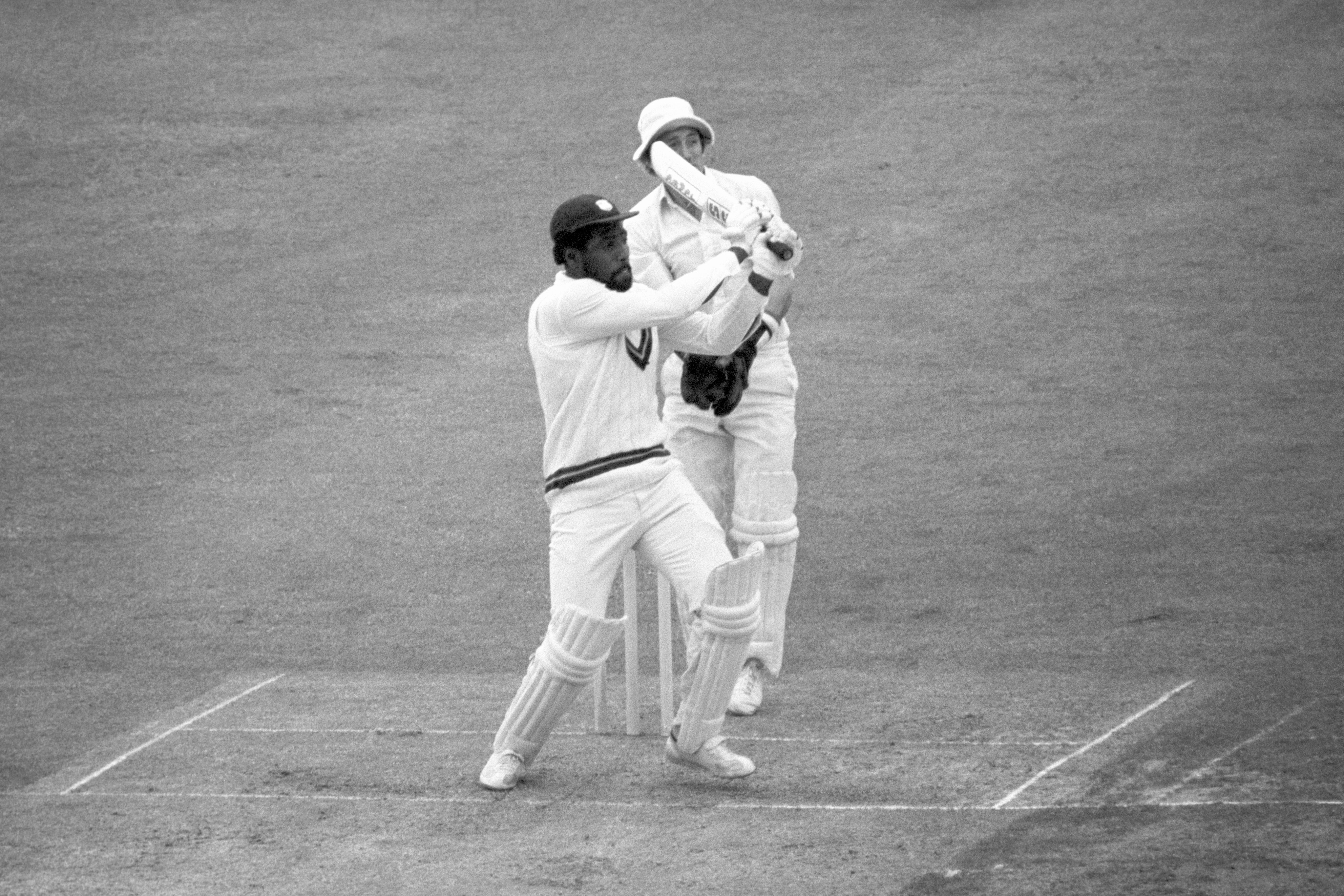 He was ‘King Viv’, the most deadly batsman of his era, when the Windies found themselves in a second consecutive final. And he was in the mood to lord it over Lord’s.

Four years ago, he had watched his captain Lloyd drag the team back from a precarious position. Now it was his turn – with the Windies on 99/4, Richards decided to put on a show.

What was noteworthy was the way Richards, that most egotistical of batsmen who never allowed a bowler to dominate him, reined in his ego and let his partner Collis King play the starring role in a stand of 139, King’s contribution being 86.

Once Collis King was done, THE king took over and, batting as if in an extended net session, powered his way to 139 and his team to 286 for nine – enough and more for Andy Roberts, Michael Holding, Joel Garner and Colin Croft to blast out England and seal a 92 run win. 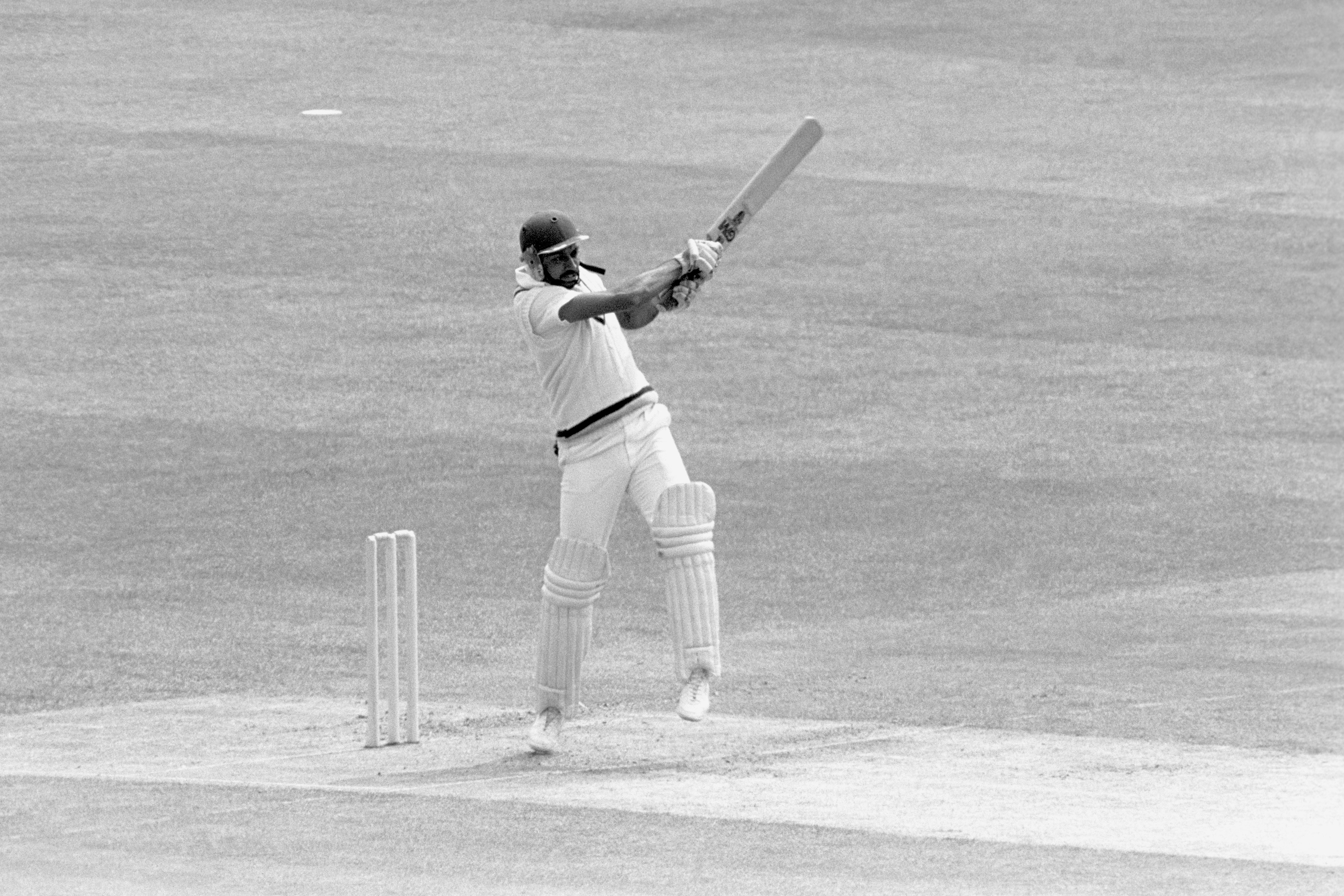 He doesn’t look like much, batting or bowling. His pigeon-toed stance has been mocked, as has his geriatric jog to the wicket when he bowls; the little piece of red cloth sticking out of his back pocket like a bunny’s tail triggered sniggers.

But it was Mohinder ‘Jimmy’ Amarnath who laughed last, and loudest. A man of the match performance in the semifinal was a preview of what was to come. On a green top at Lord’s, Amarnath walked in after Sunil Gavaskar’s early dismissal, and settled into an anchor’s role that saw him bat two hours to score 26.

Seen in isolation, those numbers are underwhelming, as in fact was India’s final score of 183. But Amarnath had one more trick left to play. After Madan Lal, Roger Binny and Balwinder Sandhu reduced the West Indies to 76 for six, Jeff Dujon and Malcolm Marshall got stuck in and, given the meagre target, seemed capable of seeing the Windies to a third successive title.

And that was the cue for Amarnath to come jogging in on his tangential run, the little red cloth bobbing up and down. He weaponized seemingly innocuous deliveries; he accounted for both Dujon and Marshall, and sealed the deal with the wicket of last man Michael Holding to return figures of 7-0-12-3 – which, taken in tandem with his anchoring 26 in a low scoring game, gave him a second successive Man of the Match award for his trophy cabinet.

Aravinda de Silva once said he cherished two memories: the birth of his sons, and the 1996 World Cup triumph. The tubby, genial right-hander with that comment underscored the two distinct facets of his personality – a family man and all-round good guy off the field, and on it a feared batsman whose contempt for bowlers and destructive stroke-play earned him the sobriquet Mad Max.

He gave a glimpse of what was to come in the semifinal, and then came into his own against an Australian side that had lately subjected the Lankans to considerable humiliation during a series Down Under. Batting first, Australia were running away with the game at 137 for one when de Silva, with his minimalist run up and accurate slow bowling, came on to take 3/42 and restrict the Aussies, who seemed headed for a 300-plus score, to 241.

For once, Lanka’s fiery opening combination of Sanath Jayasuriya and Romesh Kaluwitharana failed. Enter Mad Max, starring first in a crucial 125-run partnership with Asanka Gurusinha (65) and compiling an unbeaten 107 to guide his team home in company of skipper Arjuna Ranatunga. 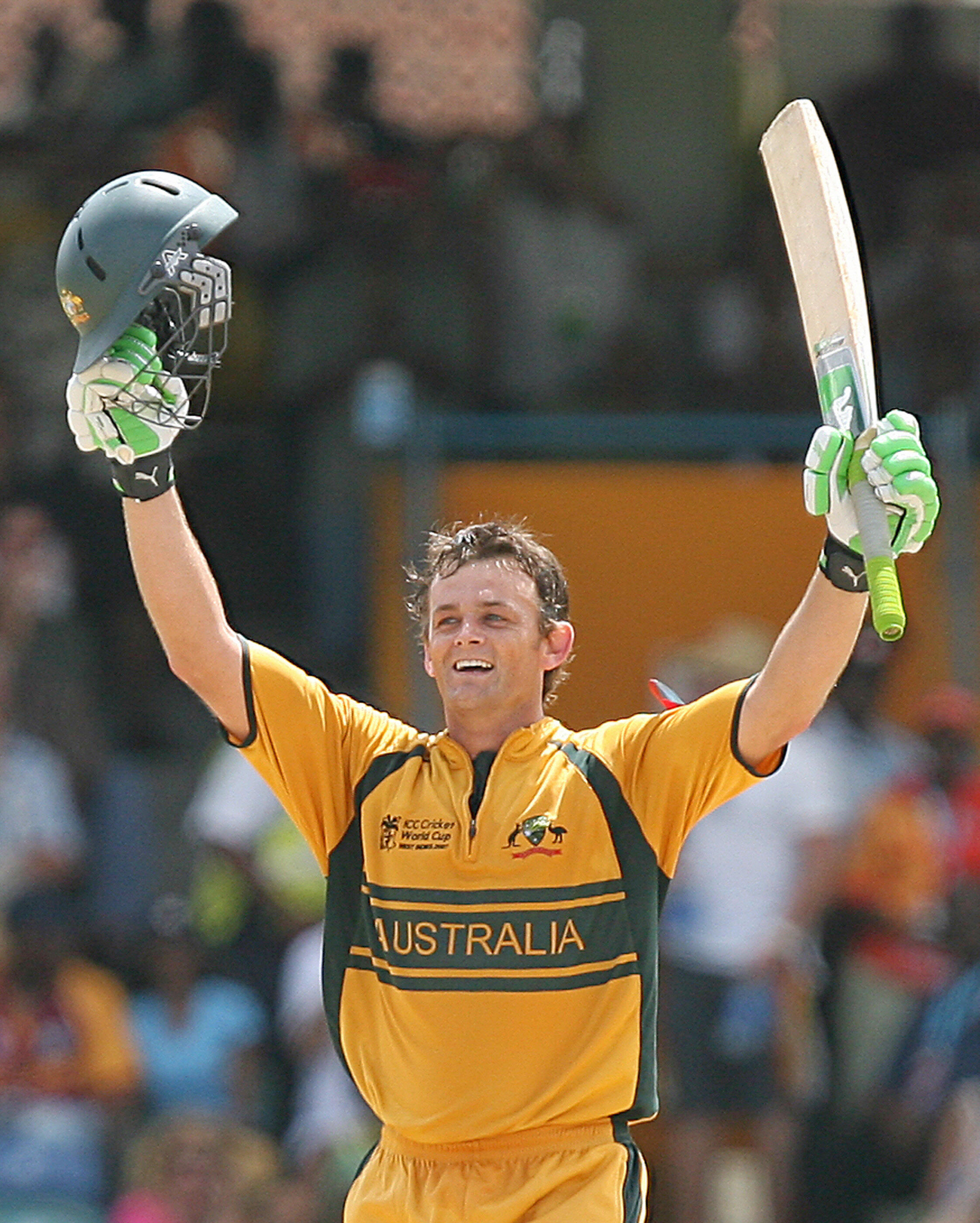 Adam Gilchrist is known for his pyrotechnics with the bat, so it was no surprise when, in 2007, he blasted his way to his first ever World Cup hundred, a barnstorming 149 off just 104 deliveries – and landed himself in controversy when it turned out that he had a squash ball stuffed into his left glove to help with his grip.

The highlight of his knock was that on a pitch where even the likes of Matthew Hayden struggled for touch and timing, Gilchrist hit the ball to any part of the ground he took a fancy to, against every kind of bowler the Lankans could throw at him.

The innings pretty much sealed Australia’s hat-trick of Cup wins; that the Lankan chase ended in near darkness was a needless controversy created by the shoddy organisation that by then was an ICC trademark. 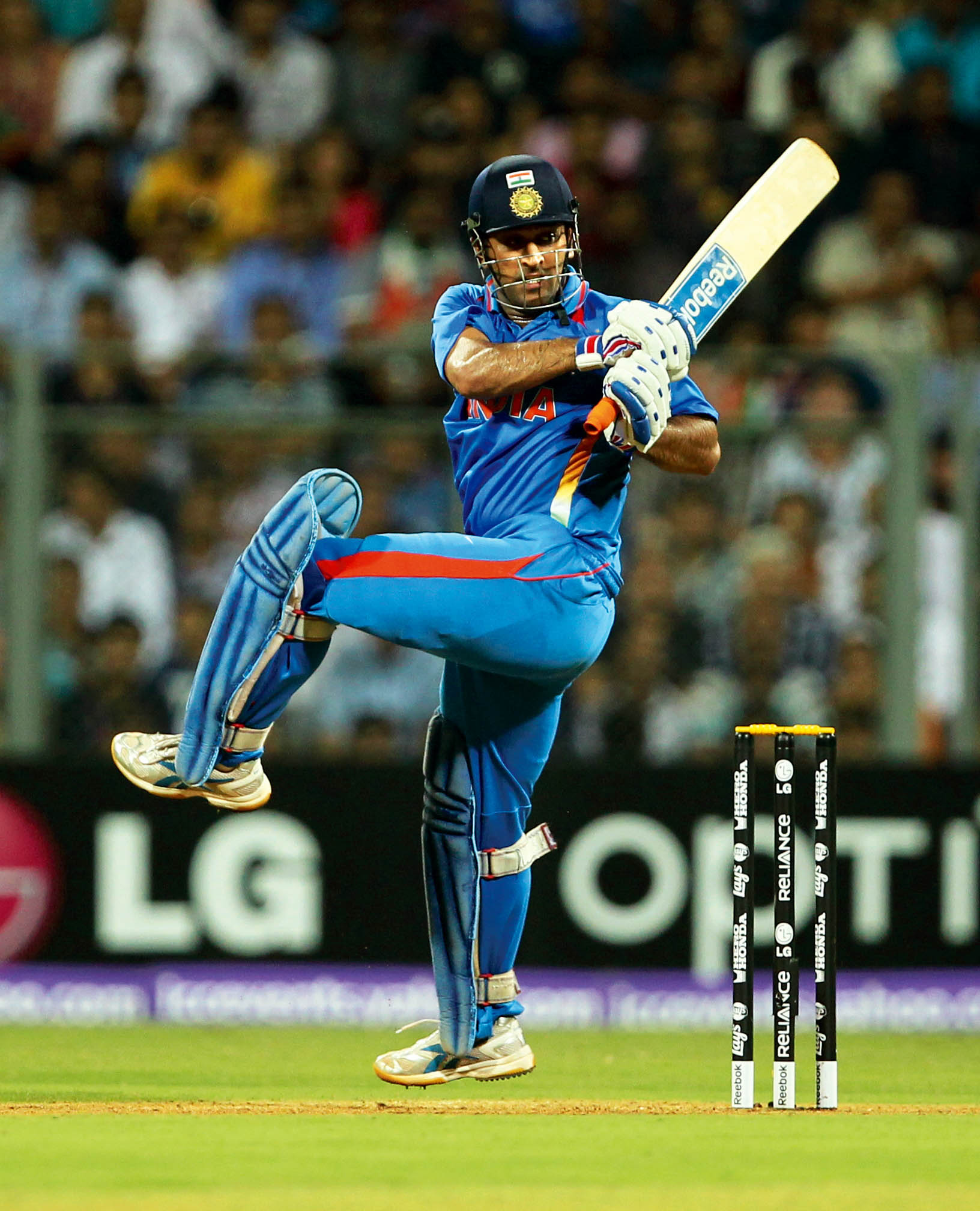 Undeniably one of the greatest cricketing minds of this or any generation, MS Dhoni has been known for his skills as a leader and his composure as a batsman. One of the greatest finishers in world cricket handpicked his time to shine on the biggest stage.

Chasing 274 in a high-octane final at the Wankhede Stadium in Mumbai, the Indian skipper promoted himself up the order, walking in with India still needing 161 from 170 balls, never easy considering the magnitude of the situation.

Then coach Gary Kirsten said the decision sent a ‘chill down his spine’, likely because Dhoni the batsman had a very ordinary World Cup till then, failing to cross 50 on even a single occasion, whereas India had Yuvraj Singh in the hut, who was having the tournament of his life.

It proved to be a tactical masterstroke, though, as Dhoni joined forces with the left-handed Gautam Gambhir (97) to take India to the verge of a second World title. And then, in what became one of the most iconic moments in ODI cricket, Dhoni deposited Nuwan Kulasekara into the stands and, with a certain swagger, rolled the bat under his left arm to signal the end of the contest.

There have been a few other eye-catching performances in World Cup finals, notably Ricky Ponting’s 140 against India in 2003 or Shane Warne’s 4/33 in 1999. What determined the selection of Lloyd, Richards, Aravinda, Gilchrist and Dhoni in the shortlist is that they, by virtue of either changing the game around from a difficult position or displaying outright genius, left an imprint on the game that lingers long after the results have been forgotten. 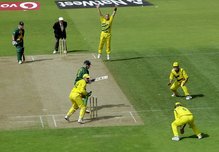