For Delhi, home is where the hurt is

For Delhi, home is where the hurt is

On March 13th, Punjab took on Delhi at Chandigarh. And it was more Ocean’s XI than Kings XI as the hosts pulled off one of the greatest heights in recent memory.

The Kings XI score of 166/9, achieved without the injured Chris Gayle, was on that ground on that day about 20 runs below par, and it showed: After 16 overs, the rebranded, refurbished Delhi Capitals were cruising at 137/3 with Rishabh Pant on 33 off 24 balls and Colin Ingram, back after eight years in IPL Siberia, on 36 off 24. The ask, 30 from 24 with seven wickets in hand.

What followed was 20 balls of unimaginable insanity, in course of which Delhi lost seven wickets for 15 runs. Shami started the slide in the 17th, taking out the over-ambitious Pant; off the next ball, a pumped up Kings’ skipper Ravi Ashwin uncharacteristically attacked the ball to run Chris Morris out. Still, 23 off 18 with five wickets and the set Ingram at the crease. Enter Sam Curran, who in his next eight balls took four wickets for four runs, including a hat-trick spread over overs 18 and 20. The Kings won by 14 runs; incredibly, there were still four balls to go as Curran finished with 2.2-0-11-4.

Such things leave lasting scars, but Delhi – with the seasoned Ricky Ponting and Saurav Ganguly in the back room – recovered and, as the two teams meet again with Delhi playing host, are actually at number three on the points table with 10 points from 5 wins in nine games. KXIP has an identical scoreline, but are placed fourth thanks a run rate differential (DC 0.146, KXIP minus 0.015). And that is the kind of situation mouth-watering rivalries are made of.

Wickets shouldn’t have an inordinate impact on results, but the Kotla is likely to play, if not a starring role, at least a strong character part. It has short boundaries, which is a plus for batsmen, but against that the ball tends to keep on the lower side; there is turn, and the pitch “sticks” a bit – all factors that inhibit free stroke play.

This is evidenced by the games played at the Kotla thus far. On March 26, CSK made heavy weather of a chase of a modest 148 and got home with two balls to spare; on April 4 the hosts managed only 129/8 and still SRH, with the best opening combination in the tournament, took 18.3 overs to get past the line; and on April 18, Delhi crumbled to 128/9 chasing Mumbai’s 168/5. The exception was the March 30 game versus KKR where both teams scored a high 185, leading to the famous Caribbean shoot out that pitted Kagiso Rabada against Dre Russell.

Analysis of the bowling performance of the two teams this season throws up some pointers: 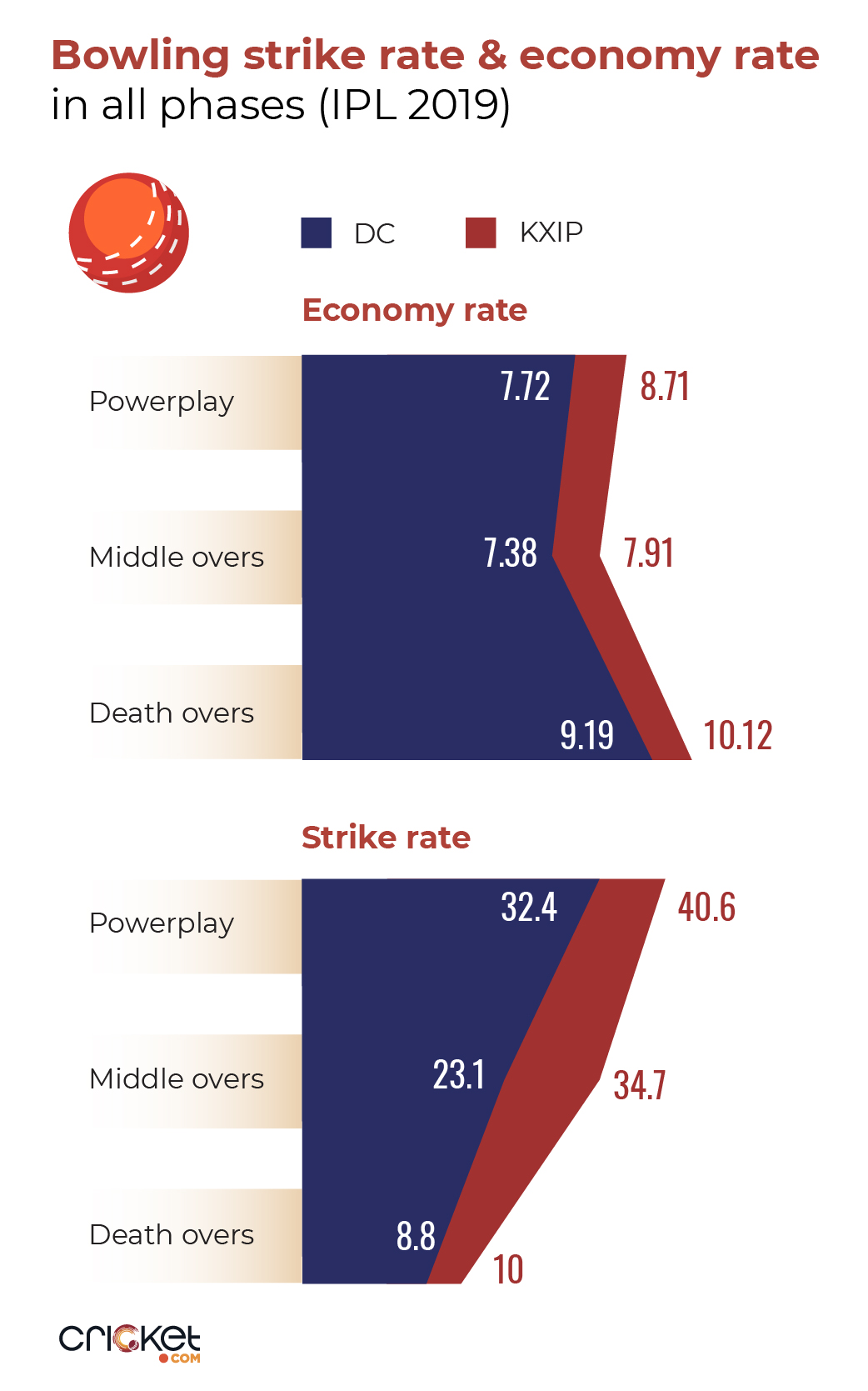 Of the two teams, Delhi does very well at the death, with an economy rate of 9.19 and a strike rate of 8.8. KXIP, in contrast, fails to control the scoring, and equally doesn’t pick up wickets at the same frequency. This is against all teams, on all grounds. Now look beyond these numbers, to this specific match up on this specific ground:

Ishant Sharma, the third prong of the seam attack, has developed a finely-honed radar with the new ball; his economy rate of 7.04 is actually better than that of his two higher rated partners. He has 58 dot balls in his 22 overs bowled, well ahead of Morris who, in 25 overs, has 53 dots.

You would imagine that a bowling attack like that, backed by the spin of Axar Patel and Amit Mishra, would be a handful for any team – except, Delhi has a domestic abuse problem. The staff managing the Kotla has given the team the worst possible conditions for its bowlers. Hence the oddity: Delhi has lost three of four matches it hosted (the exception being the tied game); what makes it worse is that the defeats have come against sides that are very handy at playing on low, slow wickets: CSK, to whom they lost by six wickets; SRH, who won by 5 wickets; and most recently MI, who beat Delhi by 40 runs.

And now, in a must-win game, they are up against KXIP, a side that is better suited to the Kotla than the hosts -- the two Ashwins Ravi and Murugan, backed by teenage offie Mujeeb ur Rahman and with Sam Curran and Mohammad Shami capable of taking the pace off the ball and bowling the hard lengths, is an attack that can give a lot of trouble to the hosts; particularly because KXIP have the batting to give their bowlers something to aim for.

Here is how the two teams have performed with the bat, against all opposition at all venues this season: 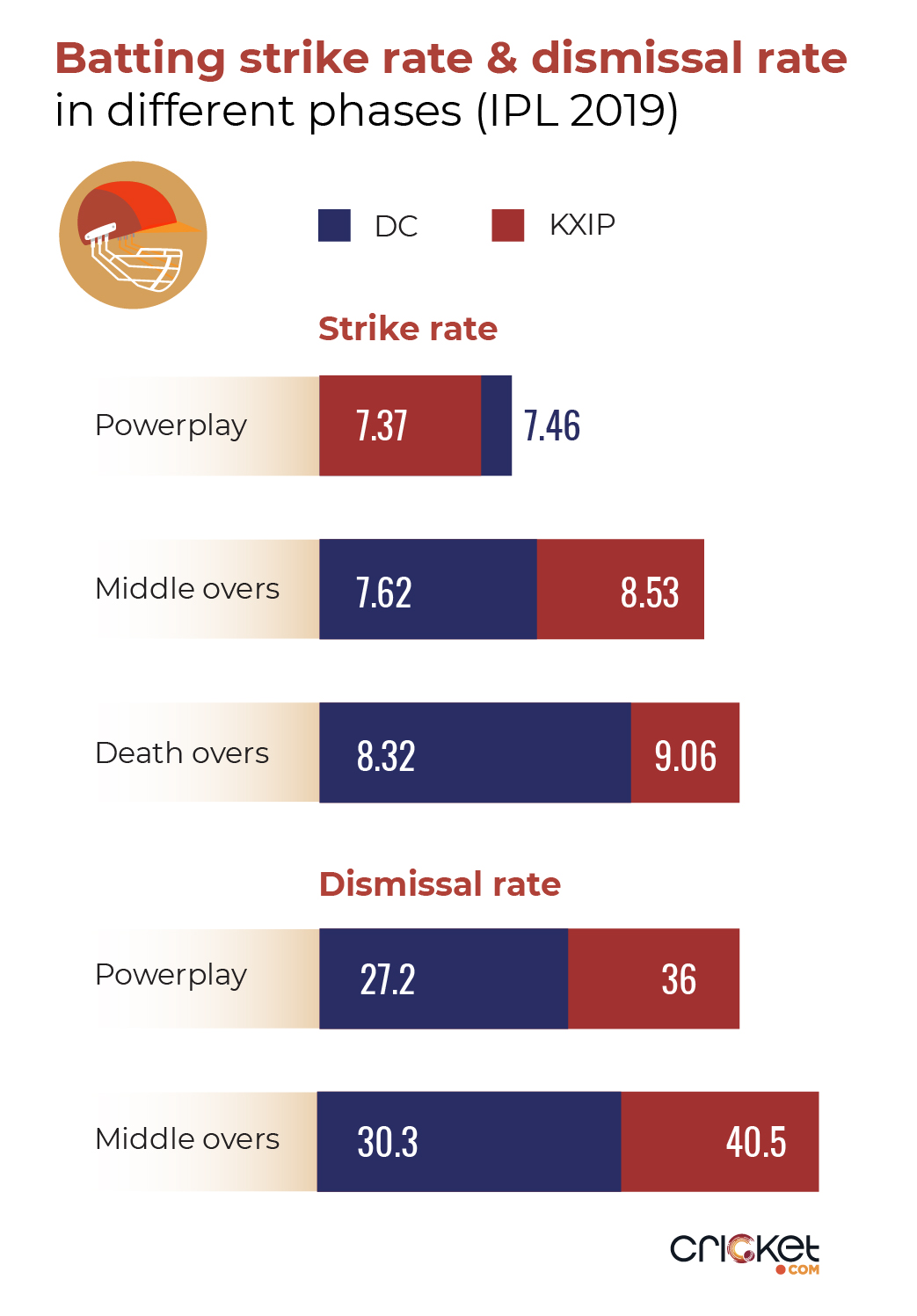 Delhi hasn’t been particularly effective at the death. Chris Morris was the natural candidate for acceleration; his poor form has handicapped the hosts in a crucial segment of play. Against that, Punjab not only scores better at the death, it also loses the least wickets in this phase of all teams this season.

Now examine the teams from the lens of this particular game. KL Rahul began the season looking out of sorts, but a few games in he sorted himself out and now, with Chris Gayle, he forms an all-conditions opening pair in peak form.

What is interesting is the contrasting nature of their play, as evidenced in two sets of figures. First, strike rate: Gayle hits at 155.06; Rahul at 127.72. No contest.

Now consider this: Gayle in 8 innings has three fifties; Rahul, in nine knocks, has three not outs including one unbeaten century and four fifties. And he is currently next only to David Warner in total runs scored (Gayle is fourth on the list).

What you are looking at is a very pretty opening picture: Gayle goes big; Rahul starts slow and bats deep while still scoring at a healthy rate. Backed by Mayank Agarwal (225 runs striking at 146.1); Sarfaraz Khan (180, at 125.87); and David Miller (171, at 139.02), that is a batting lineup with the ability to put enough on the board for its bowlers under most conditions.

Also, this: Kotla is a small ground conducive to six-hitting particularly in the first half of the innings against the harder ball. Gayle has hit 26 sixes thus far in this season, Rahul 13, and Mayank 11.

On those parameters, check the Delhi Capitals lineup and you begin to see the gulf opening up. Shikhar Dhawan has the most runs (291 in nine innings) followed by Shreyas Iyer (269 in 9) – but considering they bat in the top three, their strike rate is underwhelming: Dhawan 129.9, Iyer 118.5. Also, they differ from Gayle and Rahul in that Dhawan has just 2 fifties in nine knocks, and Iyer has just one. So two of their top three score less runs, at a slower pace, than the rivals.

Prithvi Shaw, Dhawan’s partner, has a better strike rate – his 207 runs in nine knocks have come at 140.8. But keep in mind that of his 207, 99 runs came in just one knock against KKR; his other eight knocks have produced just 108 runs.

The Capitals’ best batsman by a distance is Rishabh Pant – his 252 runs have come at a strike rate of 154.6 – and, to revert to the point about Kotla’s short boundaries, he has 12 sixes which is more than Dhawan and Prithvi combined.

Word is that Pant was depressed when he found himself out of the World Cup squad; more so by the reason stated. How, he kept asking his close friends (including statemate and WC opener Dhawan) is he, India’s number one choice in Tests, not considered good enough to be even reserve keeper in ODIs?

The likes of Ponting, Ganguly and Dhawan are supposed to have talked the lad down from that ledge of depression; to have pointed out to him that time is on his side; that his best response is to make runs by the bucketful. Ponting, particularly, is believed to have given him the same advice a certain Viru Sehwag got in his time: that he has oodles of talent; that he can take on any bowler in any conditions; but that he needs to respect the game, put a price on his wicket, and not throw it away through youthful exuberance as he has been prone to doing. If the advice registers in young Pant’s mind, the results could be quite something.

The ifs and buts around Pant aside, on balance you have to say that in a must win game at the Kotla, it is KXIP that goes in with the edge; that edge will be further enhanced if Ashwin wins the toss and opts to let Rahul and Gayle go first. All of this is on paper and to quote the military strategist Clausewitz, no strategy survives contact with the enemy. What we can bet big on is that with the stakes this big, and at the business end of the competition, this should be the marquee contest of the weekend.