In yet another move which signifies the winds of change currently sweeping through West Indies cricket, experienced opening batsman, Chris Gayle has been given the honor of vice-captaincy for the 2019 ICC Cricket World Cup scheduled to be held in England from May 30th. Gayle will be deputy to Jason Holder for the mega event while Shai Hope has been named vice-captain for the ongoing tri-series in Ireland also involving Bangladesh. Gayle is the senior-most member in the West Indies team having played 289 ODIs till date. He has been a former captain as well and it is widely assumed that the World Cup will be his last tournament in the ODI format.

“It is always an honour to represent the West Indies in any format and this World Cup for me is special. As a senior player it is my responsibility to support the captain and everyone else in the team. This will probably be the biggest World Cup, so there will be great expectations and I know we will do very well for the people of the West Indies,” said Gayle on the appointment.

Hope meanwhile termed his appointment as a “tremendous honor.”“It’s a tremendous honour to be appointed vice captain for this series here in Ireland. Ahead of this tournament I was asked to take on this role and I was happy to accept. Anything I’m asked to do for West Indies cricket I’m always happy and willing to put my hand up, so this is great,” said Hope.

West Indies are currently in Ireland playing the tri-series and begin their World Cup campaign against Pakistan at Trent Bridge on May 31st. 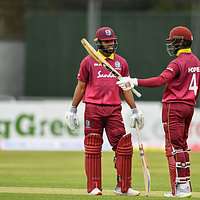