George Munsey: To come so close and not qualify for the 2019 World Cup was heart-breaking 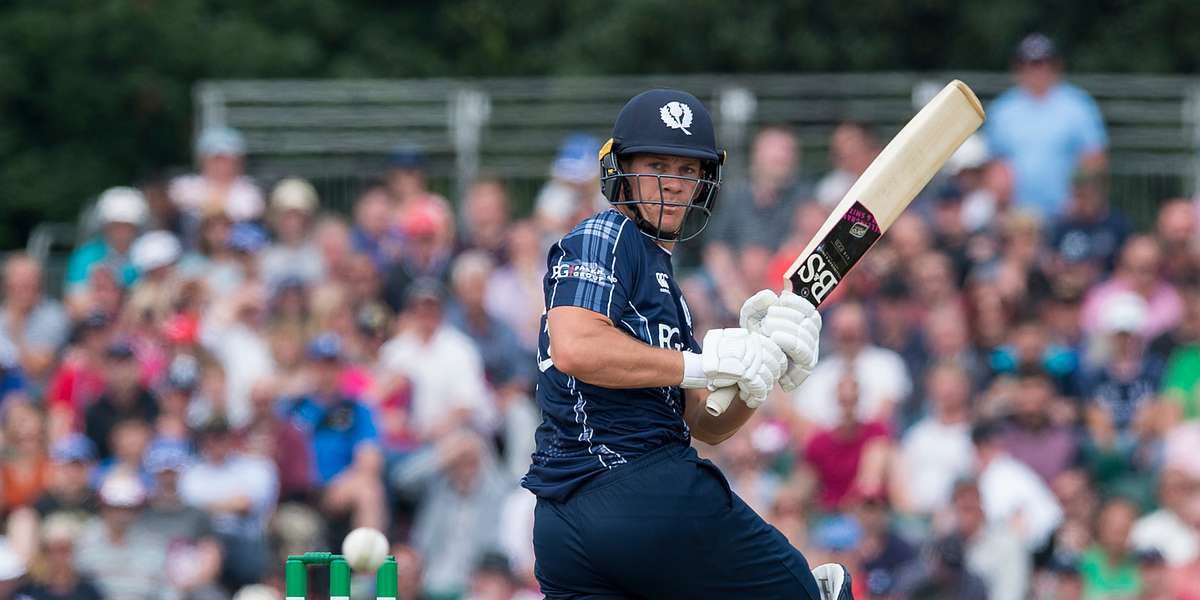 George Munsey: To come so close and not qualify for the 2019 World Cup was heart-breaking

The Scotland batsman, who registered one of the fastest T20I centuries spoke to Cricket.com on various topics

Not many have the ability to smash six sixes in an over – be it at any level – against any opposition. The likes of Garry Sobers, Herschelle Gibbs, Yuvraj Singh, and Alex Hales are some of the names that come to mind. Scotland’s flamboyant, hard-hitting batsman George Munsey too achieved this feat – albeit in an unofficial T20 match against Bath CC in April 2019. To further add to his credentials, he also beat Chris Gayle’s record to register the fastest century in the format, which came off just 25 deliveries in the same innings.

Few months after this feat, Munsey went on to slam one of the fastest T20I centuries as well. His unbeaten 127 off 56 against Netherlands in Malahide, included five fours and 14 big sixes. His 41-ball hundred is the fifth fastest T20I century and considering that there are more than 100 countries playing T20Is, it is a significant achievement indeed. He put on 200 for the first wicket with Kyle Coetzer, which is the third highest opening partnership in T20I history.

Talking about that knock, Munsey in a chat with Cricket.com said, “To be honest Kyle made that knock for me, he started nice and quickly where as I was slower and found it a bit tougher getting going. Kyle and I have had a really good partnership for a few years in T20 cricket and we really enjoy batting together and working out how we take down bowlers and that day we managed to do it over a long period of time. It was just one of those things that everything went the way we wanted to and we just had a lot of fun.” 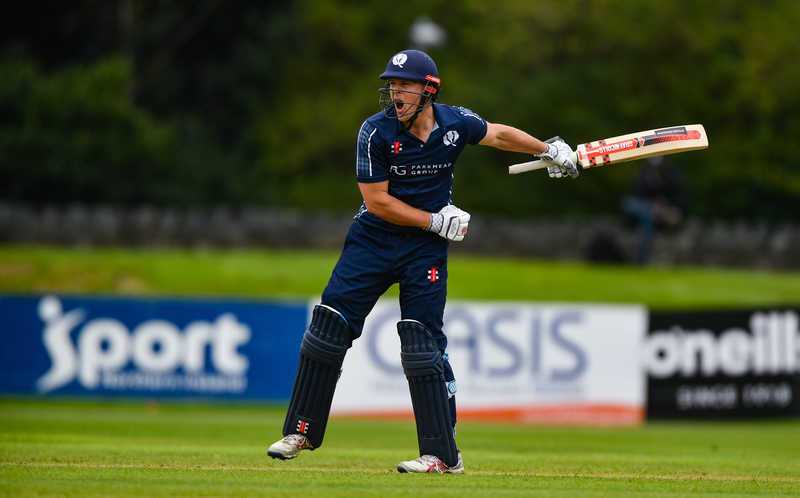 Coetzer is not just the captain of Scotland, but also Munsey’s opening partner in T20Is with whom the southpaw has a good equation on and off the field. “Kyle is a great person to spend time around no matter on or off the field. He is very relaxed and just wants to enjoy himself no matter what the situation. We tend to play golf together when it’s not a cricket day,” Munsey, who chose to play cricket professionally ahead of golf said. 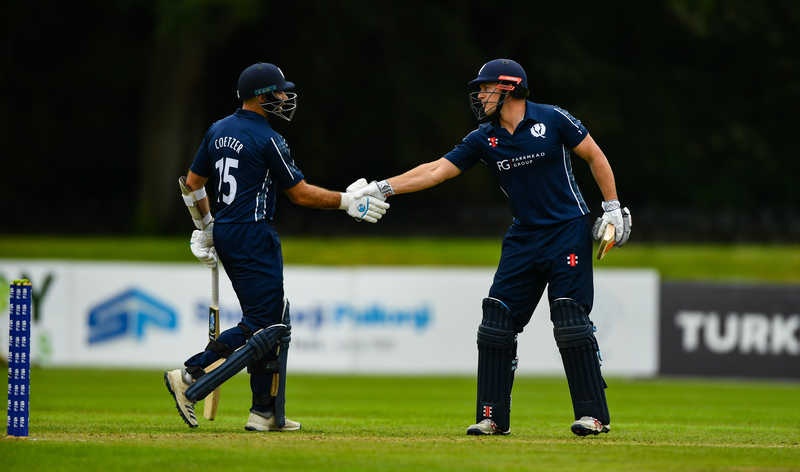 Since his debut for Scotland in 2015, Munsey has gone on to establish himself as a strokemaker, who does not shy away from playing extraordinary shots, which includes reverse-sweeping a bowler fast bowler. Munsey revealed an incident that knocked his lights out when he attempted it.

“Whatever shot you play you must practice. Reverse-sweeping seamers is good fun when it comes off but can also be painful when gone wrong. I remember in the build up to the T20 World Cup in India in 2016 reverse-sweeping one of the Oman fast bowlers and getting badged resulting in seeing stars for a few days.”

Afghanistan and West Indies filled in the last two slots required for the 10-man World Cup in 2019. The decision to make the mega event a 10-team event was not well-received by many in the cricket fraternity as it was unfair on other nations like Hong Kong, PNG, and Ireland to name a few. Things could have been different, however, had weather not played a part in Scotland’s final Super Six fixture against West Indies in the World Cup Qualifier 2018, in Harare – where the winner would have qualified for the World Cup.

Munsey was at the crease, when rain stopped play and as it turned out, Scotland were five runs short of where they should have been and it became a case of so close, yet so far for them as West Indies went through. “This was really tough to take and we had to learn a lot from this. We had a great build up and tournament in Africa and Grant Bradburn (Head coach) and the coaching staff had the team in a great state of mind to get the job done of qualifying for a World Cup. To come so close and not manage to get over the line was heart-breaking and made worse by it not being a full game,” Munsey said.

The Scotland batsman further added, “I know all the teams were shocked by this (decision to make the World Cup a 10-team event) change and it definitely made the process for the smaller countries a lot harder. I personally feel the World Cup should be a chance to show off what each country has to offer and given an opportunity I believe Scotland especially in England would have done very well.”

Another aspect that worries the Scotland star is the lack of opportunities to play against the full members on a consistent basis. Scotland’s stunning victory over England – the No. 1 ODI team – in 2018 was a sign that they cannot just compete against the big guns, but also beat them. While they do get a chance to play one-off matches, but a full-fledged series seems to be out of the question from what it seems. There are budgetary constraints that doesn’t allow this to happen as Munsey explains. “A lot of this comes down to budget and the way the structure is doesn't really allow for the smaller countries to play longer series against full members.” 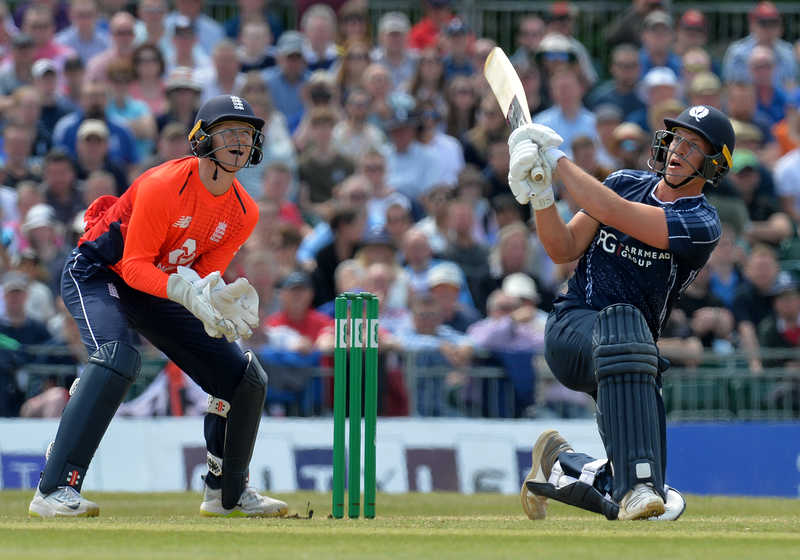 Given Munsey’s ability to hit the ball hard and far, it comes as little surprise that he took part in the Abu Dhabi T10 League, where he shared the dressing rooms with the likes of Andre Russell, Darren Sammy among others in the Northern Warriors’ team. Talking about his experience, Munsey said, “T10 was a lot of fun. We had great team owners and great mix of experience in the staff and also players. Dre was great value and a lot of fun. Learnt a lot about the game and the way he plays and off a few others too which is so valuable.”

Due to the COVID-19 pandemic in what was supposed to be a busy period for Scotland – with matches against USA and UAE in the Cricket World Cup League 2 – followed by limited-overs home fixtures against New Zealand and Australia, have all been scrapped at least for the moment. Munsey has been keeping busy by running five kilometres every day for the first 30 days of the lockdown. He also has been progressing his strength around the house. Like most, he too has taken this break to take his mind away from the game to recuperate from what has been a busy few years.

He however, still remains hopeful of the T20 World Cup in Australia taking place. “I know the ICC and Australian cricket board will do whatever they can to get the T20 World Cup on in a safe and professional environment for everyone involved. I am hopeful that the tournament will be on as so many teams have done so well to get there and have earned their right to play on the big stage and take on the best in the world.”