Have great respect for Indian bowlers but our batsmen have seen them a lot: Langer 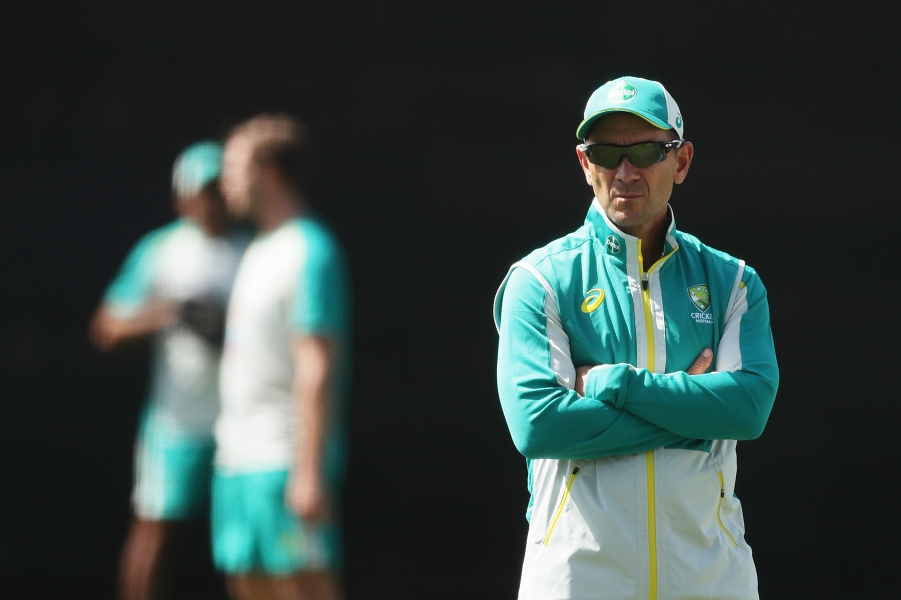 Have great respect for Indian bowlers but our batsmen have seen them a lot: Langer

Australia coach Justin Langer on Wednesday (25 November 2020) said he has great respect for the formidable Indian bowling line-up but his team's batsmen have become familiar enough with their tactics to be ready for the challenge they will throw up in the upcoming series.

India and Australia will clash in a full series, starting with the limited-overs leg, from November 27 here. Langer said the contest would likely be an exciting one thanks to the two teams being evenly-matched.

"Well, we know Jasprit Bumrah, world-class bowler, (Mohammed) Shami, really good opening combination. We have great respect for that and guys have seen a fair bit of them, through the IPL and the last couple of summers," Langer said in a virtual media conference facilitated by the series' official broadcasters Sony.

"We have played 14 ODIs against India in the last few years and it's seven all," he added.

The spin department features Yuzvendra Chahal along with Kuldeep Yadav and Ravindra Jadeja.

Langer said the Australians would be ready for the challenge.

"...our guys have seen a lot of each other and that's what I love about the contest, you see which teams are growing, which players are growing. We have played a bit against each other now.

"Our guys know they are going to be on their toes all the time in all forms of the game against the Indian bowling attack. But they are working hard, they have seen a bit now and they will be ready for it," the 50-year-old asserted.

Langer sidestepped queries on India missing star opener Rohit Sharma and pacer Ishant Sharma due to injury, saying that it was not his concern.

Rohit and Ishant, who suffered injuries during the IPL, are in danger of missing the Test series.

"It is not our business, we have our own challenges, we will come together for the first time as a group on the morning of the game, so it's up to India who they choose," he said.

"We have literally zero control (over it). One thing I have learnt through the COVID-19 period is that if you get caught up in things you cannot control, then you literally go crazy.

"One thing, we have zero control or say is in who India picks, they can pick whoever they want, we have our own challenges, so India whoever they put out on the park, we will be ready to take them on," he added.

The coach took pride in the bowling resources of his team, describing them as great.

"We've got great depth, we showed it throughout the Ashes series. We managed our bowlers according to different conditions and how they were feeling," he said.

"We've got Mitchell Starc, Pat Cummins, Josh Hazlewood. We've got James Pattinson, Sean Abbott and Michael Neser knocking so hard...we're really confident we can cover whatever the scenarios are...I'm really comfortable and confident in that. It's one of our competitive advantages," he said.

He also made it clear that Steve Smith, who missed the ODI series against England due to a concussion, would make the playing XI for the series.

"Obviously Steve (Smith) will come straight back in and there are some headaches but they're good headaches. There's a lot of talk about selection, they give you a few headaches, but I promise they're really good headaches to have," he quipped.

According to Langer, the upcoming series will be a cause of joy to people of both the countries during the tough circumstances caused by the COVID-19 pandemic.

"We'll be relieved when we hopefully get through the whole summer. I know there are some people who are working round the clock to ensure this series goes on.

"It's important not only for the economic health of the game in Australia but also for a lot of people around the world. I know in India, at the moment, COVID has had a real impact," he said.

"Hopefully it will put some smiles on people's faces - that's the bigger picture we're looking at as well," he added.

The series, comprising three ODIs, as many T20 Internationals and four Tests, will be aired on Sony Ten 1, Sony Ten 3 and Sony Six channels.

No room for abuse, plenty for banter: Langer on India series

Langer asserted that there would be no room for abuse when his team takes on India in an upcoming series but he expects plenty of banter between the two evenly-matched sides.

Langer, who had a reputation of being an aggressive player himself, said that in the last couple of years, the Aussies have had lots of conversations about behaviours both on and off the field.

Australia have copped quite a bit of criticism for its players' win-at-all-cost mindset in the past which even led to a thorough examination of the side's attitude and ethics.

"People say you get nervous coming to Australia, I'm not sure it's about the chatter. It's because they're coming up against very, very great players," Langer said in an online media interaction ahead of the series starting Friday with the first ODI.

"If you're facing Warney (Shane Warne), Glenn McGrath or bowling against Steve Waugh, Adam Gilchrist or Ricky Ponting I think that makes you more nervous than a few words that might be spoken," he recalled.

"...anyone who has watched the last couple of years we talk about our behaviours on and off the field and we talked about there's no room for abuse. There's plenty of room for banter and having that competitive instinct."

Langer said that given the great cricketers, who will be playing the series, the competitive energy would be intense enough on its own.

"The captain Tim Paine has a great sense of humour, we love what VK (Virat Kohli) was doing, there's a great sense of theatre to it. At the end of the day, I can promise you the pressure on the cricket field has nothing to do with the words spoken, it's the person you're up against.

"We're lucky in this series there'll be a lot of great cricketers and that's enough intensity let alone any words spoken," added the head coach.

Earlier David Warner had stated that he would rather ignore than engage if he is sledged by the Indians in the series.