The story of Afghanistan is best captured in a phrase made famous by former US President Barack Obama: The Audacity of Hope.

A nation plagued by endless war and crippling poverty has found, in cricket, a way out of the dark, a means to let the world know that there is more to their country than “terrorism”.

From the dusty pitches and extreme temperatures of the Pashtu region to calling the picturesque Dharamsala home, Afghanistan’s growth has been the talk of the cricketing world. After gaining ODI status in 2011, its progress has escalated by leaps and bounds.

When the nation made its World Cup debut in 2015, Afghanistan registered its first win, against Scotland, but otherwise failed to create any kind of impact. But since then, Afghanistan’s rise has been mercurial, with a galaxy of stars emerging led by poster-boy Rashid Khan.

In the lead up to the latest edition of the 10-team tournament, Afghanistan has hit a purple patch, bettering the West Indies in the qualifying tournament in 2018.

Minnows no longer, thanks to the spin duo of Rashid and Mujeeb Ur Rahman, Afghanistan will look to punch above its weight starting with its first fixture against the mighty Australians on June 1.

In 2017, Mohammad Shahzad was banned for a doping violation but one year after his return, the explosive opener has been just the impetus Afghanistan has required. Shahzad has gone on to become Afghanistan’s highest ODI run-getter, with 2619 at an impressive strike-rate of 88. His opening partner Hazrathullah Zazai is as attacking as Shahzad, though he reserves his best for T20Is. How soon he adapts to the 50 over format will be a key question that determines the fortunes of his side. 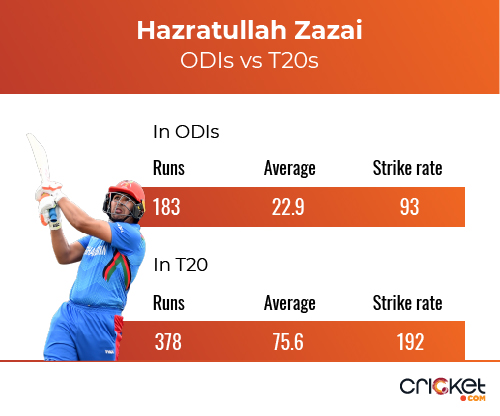 Rahmat Shah and Mohammad Nabi will be the consolidators in the middle overs – the experience the latter brings is a key component of the side.

Shah has been Afghanistan’s top scorer in the last 12 months, scoring 948 including two centuries. His strike rate of 74 however is the issue – and Afghanistan will have to find a way of either getting him to ramp up, or use him as anchor and find a strike force to bat around him. 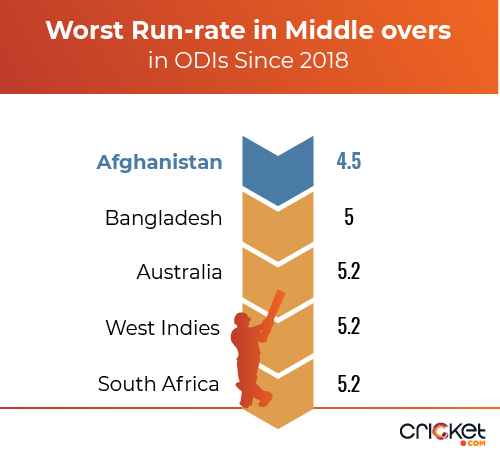 Despite the chinks in the batting, Afghanistan has depended on the fabled spin twins Rashid and Mujeeb, now joined by Nabi, to bail them out. Both feature on the list of spinners with highest wickets since 2018, and will be the trump card in conditions that could assist spin. 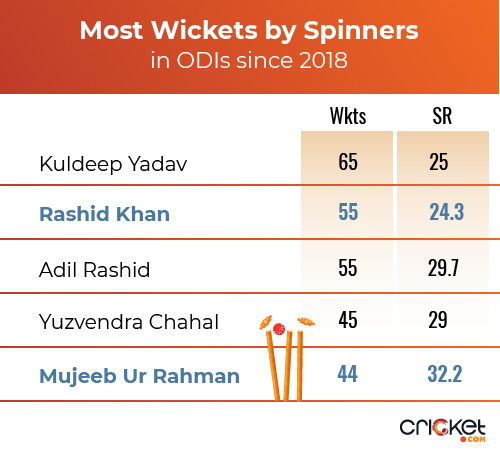 Coming off a fantastic performance in the Indian Premier League, Rashid will also double up as an effective death bowling option. Plus, he has the ability to produce little late order cameos.

Since 2018, Rashid’s economy rate in the last ten overs ranks amongst the elite in one day cricket.

No side in the 2019 CWC will take Afghanistan lightly; the side is capable of creating upsets. But for a team still feeling its way into the upper echelons of the sport, getting beyond the league phase could prove to be a bridge too far.