I don't think about my captaincy tenure: Rohit Sharma

I don't think about my captaincy tenure: Rohit Sharma

In the absence of Virat Kohli, the opening batsman is set to lead India against Bangladesh in the Twenty20 series

Rohit Sharma enjoys the leadership role but is not bothered if he will be handed the reins of the Indian team for the white-ball formats permanently or not.

In the absence of Virat Kohli, the opening batsman is set to lead India against Bangladesh in the Twenty20 series, beginning Sunday in New Delhi.

Kohli was given a break from the Twenty20 series as part of workload management.

There was a debate recently that perhaps it’s time that India embrace the idea of split captaincy and Rohit should be asked to lead the side in the limited overs formats.

The stylish Mumbaikar, though, refused to be drawn into the debate, saying he is happy to fill in whenever situation demands.

“These (captaincy) things are not in our hands. Whether you captain one or 100 matches, it is an honour,” Rohit said at a promotional event.

“When we were growing up, it was all about playing for the country. I have captained the team and the experience has been good and I don’t think about for how long I should be made captain. Whenever I get the chance to captain the team, I try and enjoy that,” he said.

Rohit gave a thumbs up to the idea of hosting a Pink ball Test match against Bangladesh at Eden Gardens next month.

“I am very excited as it is the first time. I can’t say about others, but I played one match in Duleep Trophy with pink ball and it was a good experience. The opportunity has come and will try to do well and win the game,” Rohit, who recently made an impression as Test opener, said.

“I always try to do well and for me, the thought is to not stop. My job is to keep performing and I see it that way. Be it Bangladesh or West Indies after that or when we go to New Zealand,” he said.

Rohit refused to speak on the debate over MS Dhoni’s future saying, “We don’t hear anything about these things. You guys make these things up.”

Asked about Shakib Al Hasan suspension, Rohit cut the scribe short by retorting, “I am not ICC.”

The national capital’s air quality is in “severe” category right now but Rohit said he doesn’t expect any pollution-related problem during the first T20 International against Bangladesh on November 3.

On a day when Bangladesh batsman Liton Das was briefly seen wearing a face mask to beat the toxic air pollution during his team’s first training session at the Feroz Shah Kotla, Rohit sought to downplay concerns.

The BCCI has already made it clear that the match will go ahead as scheduled despite the issue of air quality being raised by environmentalists and cricketer-turned-politician Gautam Gambhir.

“I have just landed and haven’t had time to assess. As far as I know the game is to be played on November 3 and will be played,” Rohit, who will lead the side in the three-match series in the absence of a rested Virat Kohli, said.

“We didn’t have any problem when we played the Test match here (against Sri Lanka). We are not aware of the exact discussion and I haven’t had any problem,” he added.

The game Rohit was referring to took place in 2017 when the visiting Sri Lankan players sported face masks during the third Test. Play was also halted for about 20 minutes due to haze and the “very poor” air quality.

Delhi’s air quality, at this time of the year, remains either poor or severe owing to Diwali and stubble burning in the neighbouring states of Punjab and Haryana.

On Thursday, at the start of Bangladesh’s training, Liton, for a period of 10 minutes, wore a face mask.

However, no other Bangladeshi player was seen wearing the mask even though a thick layer of smog could be seen at Kotla.

Liton didn’t wear any mask when he batted at the nets.

When Liton was further asked if he had asthma-related issues, he replied:”Nothing like that. I was just wearing it as I wasn’t feeling well. No problems as such.”

With a thick Delhi smog hovering over Feroz Shah Kotla, Liton was asked if sighting an aerial white ball was a problem in smog while trying to catch, the player said that under lights, it will be fine.

“I don’t think when floodlights are on, it will be such a problem,” he said.

“We are well prepared for the series as we had a training camp in Bangladesh and a couple of days of training here. It’s a good opportunity to adapt.”

Regarding Shakib, he said: “Shakib is the best player in our team and we are going to miss him. But even without Shakib, anything can happen in cricket. Previously, Shakib has been injured. We didn’t get him during Asia Cup.”

Asked how the team will deal knowing Shakib was in peak form during World Cup, Liton said: “If you look at our team, there are a lot of juniors, save Mushfiqur and Riyad. So we are looking at young guys to play their natural game and contribute.They are itching to perform.”

Questioned why Bangladesh can’t win close matches against India, Liton said: “I don’t know what kind of question is this. We have not finished well against India and hopefully we will turn things around this time.”

It has also been learnt from team sources that Bangladesh’s Test specialists including new skipper Mominul Haque and talented spinner Mehidy Hasan Miraz will be arriving in Nagpur on November 8.

“They will be arriving in Nagpur and start with pink ball training straightaway in between their red ball practice.”

The BCCI has already made it clear that the match will go ahead as scheduled despite the issue of air quality being raised by environmentalists and cricketer-turned-politician Gautam Gambhir. 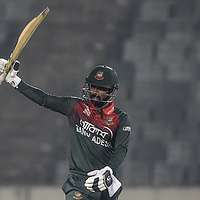 NEWS
Kotla T20 won't be cancelled but scheduling will be practical in future: Ganguly
Ganguly though dropped hints that North India venues may not be considered for matches after Diwali in future