Here is the complete round-up of top performances in batting, bowling and fielding department

When Jonty Rhodes flew like a bird to run Inzamam out in the 1992 World Cup, it created a sensation like no other. That moment of awe-inspiring brilliance set the tone as to how fielding would be perceived from that point on. Even before Jonty there were many outstanding fielders, but it can be safely said that he was the torchbearer on how a fielder would be measured. Fielding began to be taken as a specialised skill that could impact the game massively. Coaches began rewriting their books on how fielding should be viewed in context to the other skills.

By 2004, the relay throw became a common trend, although its first victim was Brain Lara in the 2003 World Cup. A diving Lou Vincent at square leg threw the ball to Chris Cairns whose bullet throw caught Lara off-guard. Rhodes had once said ‘I got more bruises, grass-burns and cuts in practice than in match play’. A boundary saved, brilliant run-outs from nowhere can lift the moral of the team.

In this World Cup, one of the main reasons England and New Zealand went all the away was a pack of outstanding fielders who backed their bowlers repeatedly. If New Zealand had Martin Guptill and Mitchell Santner, England boasted the likes of Jonny Bairstow and Ben Stokes.

New Zealand would have found it uphill to defend totals of 240 and thereabouts had they displayed lacklustre fielding performances. Santner was a live wire in the field. A valuable asset to any side, Santner saved the joint highest runs along with Bairstow.

Then there was Guptill, a specialist at point who made life difficult for batsmen. Guptill rarely failed to sparkle, with some stupendous shows in the field throughout the tournament.

Bairtsow, fielding at short cover in the first Powerplay, was a bowler’s delight. The English pace battery’s rhythm depended largely on Bairstow, who made crucial stops to ensure the strike wasn’t rotated easily. As the match progressed, Bairstow was positioned as a boundary rider, single-handed saving scores of hits to the fence. 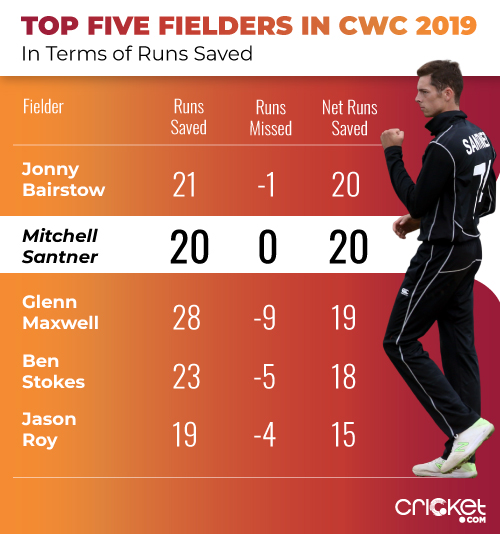 The World Cup 2019 has been a pacer’s paradise and it is not surprising that teams like New Zealand, England, and Australia have done well in the quadrennial event. New Zealand had the best bowling average in the entire tournament, with a mixed bag of quality seamers and a genuinely quick bowler in Lockie Ferguson.

Trent Boult who was out of rhythm at the start of the tournament turned a new leaf against West Indies and dished out another fabulous performance against Australia, becoming the first Kiwi bowler to snatch a hat-trick in World Cups.

Ferguson was more of a hit-the-deck bowler who generated sheer pace and left batsmen either in awe or in pain. Lockie used the bouncer, his most lethal weapon, effectively to outfox many opposition batsmen on numerous occasions setting batsmen up with short stuff and then rolling the dice with a fuller delivery.

Similarly, England had a mixed bag of variations in the pace line-up. First there was Chris Woakes, who troubled batsmen with swing and then there was big Barbadian Jofra Archer, the surprise package.

The intensity of the quadrennial event was uplifted by spectacular performances with the bat as well and records tumbled.

Kiwi captain Kane Williamson was the epitome of calmness as he led from the front. Just like ‘cornered tigers’ skipper Imran khan whose inspiring performances kept Pakistan together, Williamson did pretty much the same for his side.

The enormity of his performance was evident considering he scored 30% of his team’s total runs. Although he batted with a low strike-rate it was the need of the hour as New Zealand’s openers didn’t perform as expected. His 106* against South Africa and 148 against West Indies were standout innings of the World Cup.

Shakib Al-Hasan had a dream run. Since promoting himself to number 3 in 2018, he didn’t put a foot wrong and continued his rich vein of form scoring 606 runs at an average of 86. His most vital contribution came against West Indies where he stitched an unbeaten 189-run partnership with Liton Das for the fourth wicket. Both made a mockery of the mammoth 322-run chase as Bangladesh romped to victory with 8 overs to spare.

Jason Roy was picture perfect and suited England’s refurbished brand of changing the approach of playing ODI cricket. Through the entire world Cup he kept the bowlers on the back foot by attacking from the onset finishing with a strike-rate of 117, the highest among any batsmen who played a minimum of seven matches. He alongside Jonny Bairstow played a vital role in England’s success.

Under-rated Alex Carey turned out as a surprise package

Heading into the World Cup, Alex Carey was an under-rated wicket-keeping batsman but in the tournament brought his A-game proving to be Australia’s bondsman- whenever his team was in trouble he delivered for the team. An instance; Australia was jolted early as they found the Windies pacers too hot to handle.

When Alex Carey came to the crease they were reduced to 79/5 in 17 overs and then he joined hands with Steve Smith and played calm and composed innings of 45 to guide his team to a position of safety.

His other crucial knock came against a deadly kiwi pace attack. It was the ideal conditions for pacers and the likes of Trent Boult, Matt Henry dealt early blows as Australia were reeling at 92/5 at the completion of 21 overs.

The pitch had uneven so it was a difficult task for a newcomer but Carey moving aside all odds stitched a 107 run partnership with Usman Khawaja. Carey is not a dasher but a smart batsman possessing a valuable gift of timing the ball ‘sweet like honey’.

He was equally good behind the stumps. With Australia boasting the likes of Mitchell Starc, Patrick Cummins, Jason Behrendorff, Carey was involved in 20 dismissals, the second-highest for any wicket-keeper in this World Cup.

NEWS
Rohit, Bumrah only Indians in Williamson-led World Cup XI
World Cup winners England have as many as four players in the team.