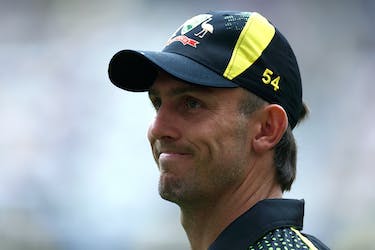 The 30-year-old revealed that he has no plans of putting his hand up for ODI captaincy.

Aaron Finch is still very much Australia’s T20 skipper, but the Victorian retiring from 50-over cricket has left the position of ‘captain’ vacant in ODI cricket. The job is still very much there for the taking, with Cricket Australia opting to delay naming Finch’s successor.

Mitchell Marsh, who has plenty of domestic captaincy experience under his belt, having captained both Western Australia and Perth Scorchers, has been viewed as a potential successor to Finch, but on Tuesday, the 30-year-old confirmed that he has no plans of putting his hand up for ODI captaincy.

Marsh, talking to reporters, said that he was ‘out of the race’ and revealed that he’d not given any thought to the prospect of him leading the national side.

"Probably not to be honest, I'm out of the race," Marsh said on Tuesday, reported ESPN Cricinfo.

"I've had to get the body right for this World Cup. The World Cup is such an exciting prospect for all of us, to worry about that sort of stuff [captaincy] is just not on my radar at the moment.

"Cricket Australia has a decision to make after the World Cup...it's really not something I've thought about."

With the 50-over World Cup starting in a years’ time, one name that’s been thrown around as a quick-fix is David Warner. The 35-year-old currently has a leadership ban that bars him from captaining the national side, but reports have suggested that the veteran might not be too far away from having the ban lifted.

When asked if he’d endorse Warner for the job, Marsh said that he prefers to ‘steer clear of all those conversations’ but insisted that the 35-year-old is a ‘great leader’.

"He's a great leader among our group," Marsh said.

"As far as all the decisions go, I certainly steer clear of all those conversations. But he's a great man to have in the squad."

A mainstay in Australia’s T20 side, Marsh missed the ODIs against New Zealand and the T20Is against India with an ankle injury, and has only just gotten re-integrated back into the side. The 30-year-old, however, is not 100% yet and is featuring in the side as a specialist batter.

The all-rounder confirmed that he’s hoping to get back to bowling in a week or so, around the time when the Aussies play their T20WC warm-up fixtures.

"The body's feeling good at this stage," he said.

"Hopefully I'll be right to bowl in the first warm-up game but with Stoin [Marcus Stoinis] back bowling now, it's a bit of a luxury we can work as a team and really build towards the World Cup.”

Should Marsh get back to bowling, Australia will have seven bowling options at their disposal, four specialist bowlers to go along with three all-rounders (Marsh, Stoinis and Maxwell). The 30-year-old said that the defending champions are blessed to boast such flexibility.

"We're going to get four overs out of us; some days it's me, some days Stoin, and some days Maxi [Glenn Maxwell]. The best T20 teams in the world over the last five, six years, have that flexibility...we're almost a team within a team,” Marsh said.