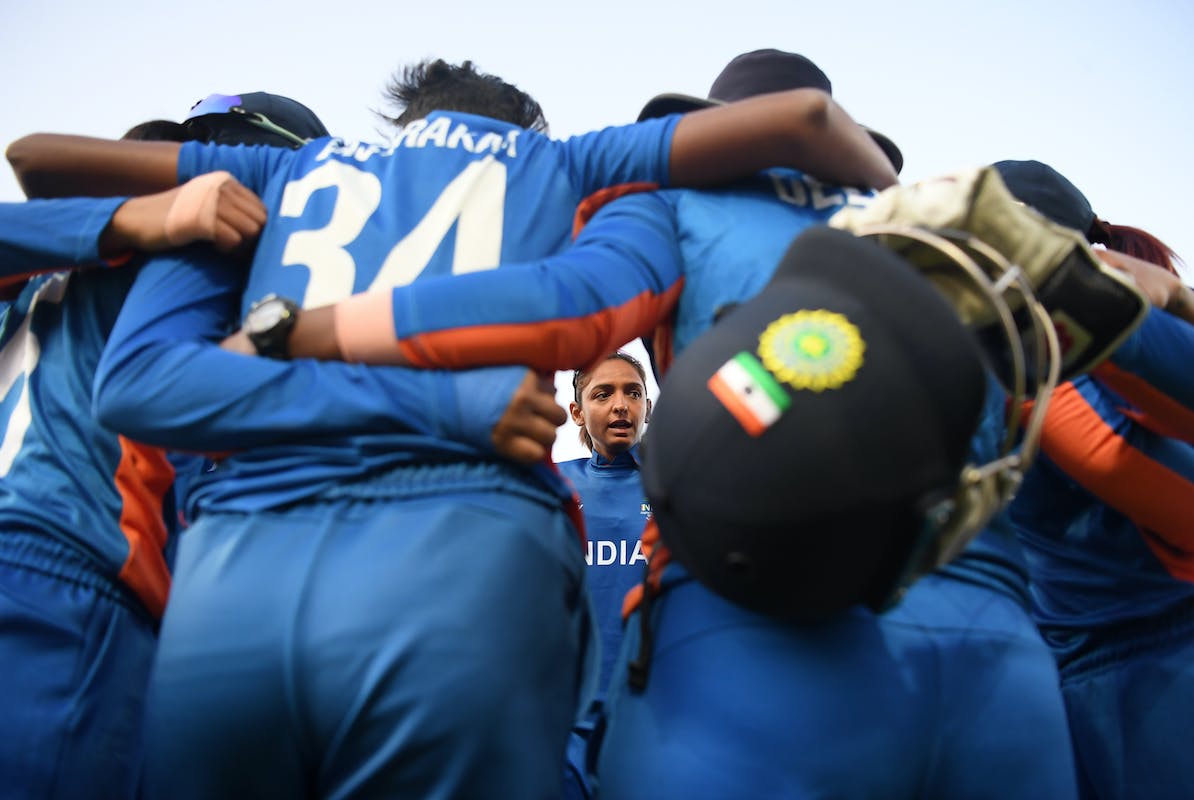 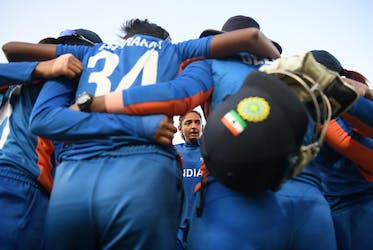 In a repeat of the 2020 T20 World Cup final, India and Australia Women will lock horns for the first-ever Gold in the history of the Commonwealth Games

In a pre-departure press conference ahead of the Commonwealth Games, Harmanpreet Kaur said that the team is working towards developing a killer attitude in the high-voltage competition.

Well, the Indian skipper was not wrong in her assessment, as the Women in Blue faltered in the inaugural clash against Australia by three wickets because of their lack of killer instinct.

However, a lot has changed for the side in the last ten days and in the three matches played thereafter as they managed to overcome their combination conundrum and settled with a team that has reaped massive dividends.

And on 7th August, it is time for them to create history.

The summit clash will go down as one of the most glorious days in the history of Indian cricket as the Women in Blue are all set to rekindle their rivalry against Australia in their bid for the first Gold medal.

The pressure of the final

While they have come agonisingly close to winning the world title twice in the last five years, Sunday provides them with yet another opportunity to create a revolution and bring smiles to millions of fans across the globe.

The last time these two sides locked horns in the final of the mega event, fans flocked the Melbourne Cricket Ground, and this game ain't going to be different as Edgbaston is expected to be a full house for an exhilarating game of cricket. 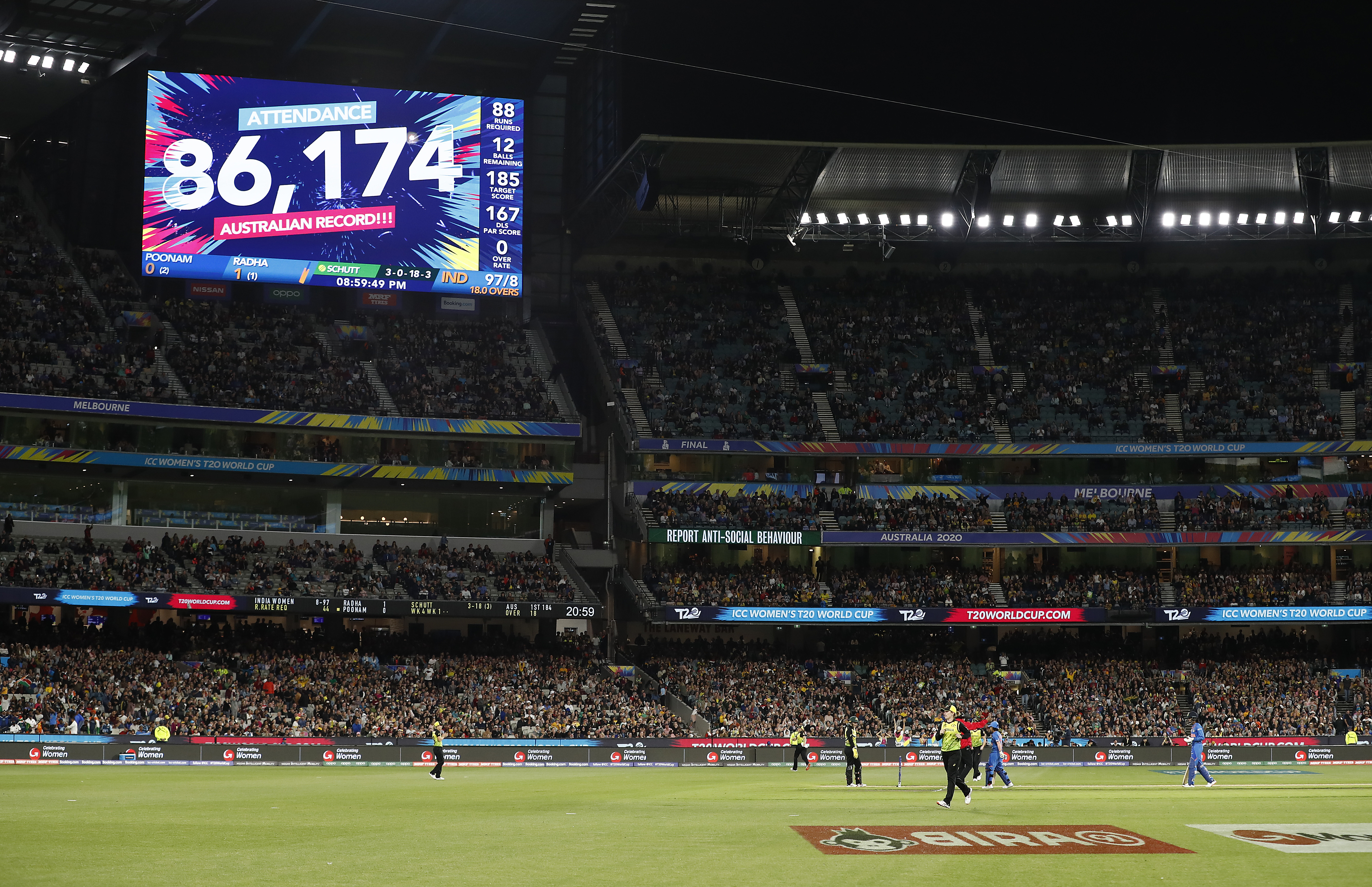 With the stadium packed to capacity and the expectations of millions of fans across the globe, there is going to be enormous pressure on the teams when they set foot in Birmingham for this humongous clash.

However, it is fair to say that Australia will be a better-equipped side as far as handling the pressure of the final is concerned. They are the reigning world champions in both formats and have dominated women's cricket since their blip against the same opposition in the semi-finals of the 2017 World Cup.

And despite those dominating performances in the recent past and the experience of playing in the final, the Aussie outfit will be wary of this young Indian side as they are the only team who have stretched them to the hilt.

Onus on Smriti Mandhana, yet again

With stakes rocketing sky-high, India will rely on their big guns in Smriti Mandhana and Harmanpreet Kaur to shoulder the bulk of the responsibility of the side as far as the batting unit is concerned.

The southpaw set the stage alight with her blistering half-century in the semi-final against England and will hold the key for the team in their bid to dismantle the Aussie bowling unit in the powerplay. 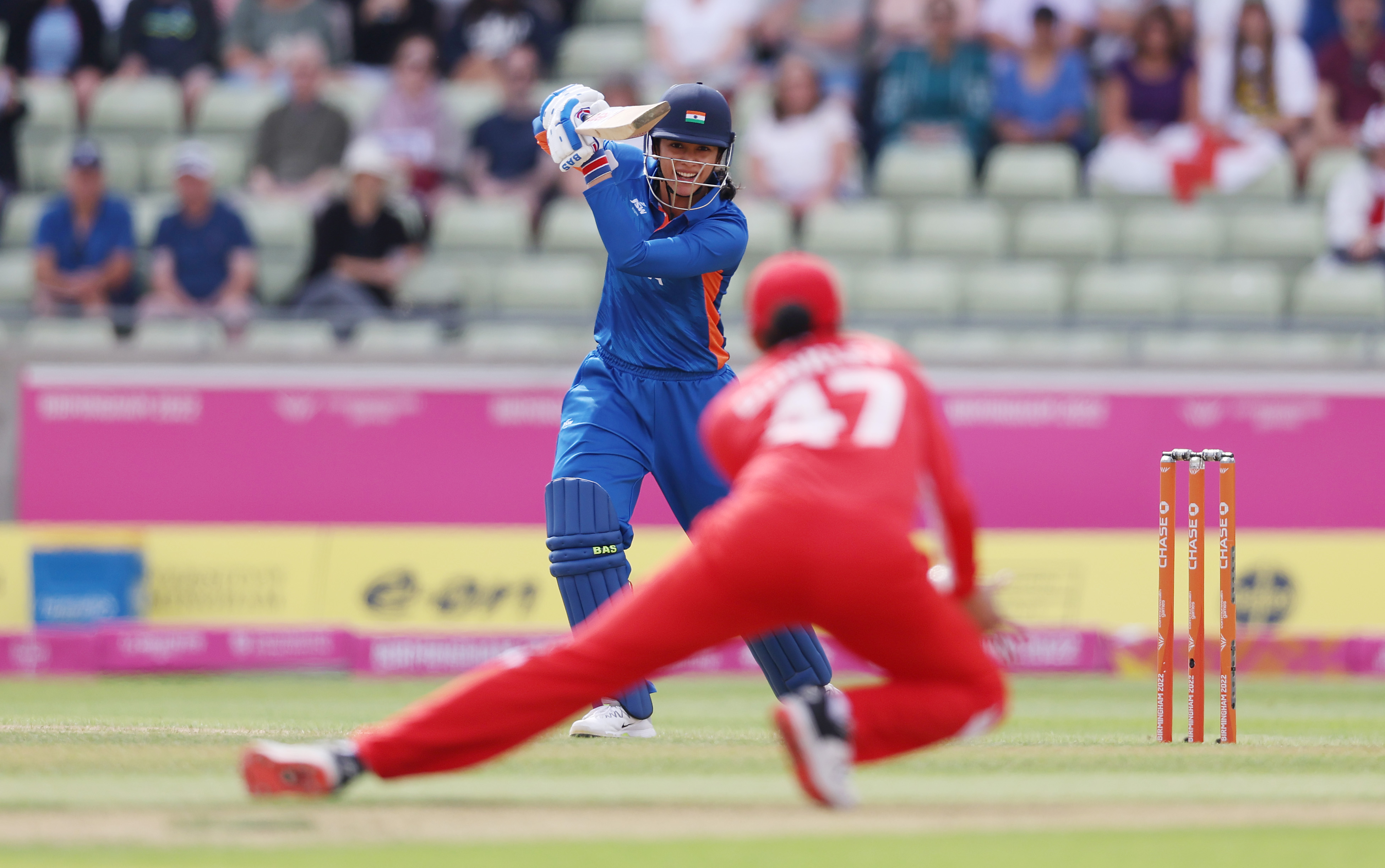 Another significant aspect of why India would be in dire need of Mandhana to bat as long as possible is the lack of left-handed options in the middle order.

Barring the vice-captain and Deepti Sharma, India does not have a left-hander in the batting unit. With the likes of Alana King and Jess Jonassen operating in the middle overs, the duo will be the ideal players to take the attack to the spin twin of Australia in a sea of right-handers in India's batting line-up.

While we are talking about India's opener and her heroics in the last game, the same cannot be said about the Australian side, as they have struggled to forge a partnership in the four games played thus far. 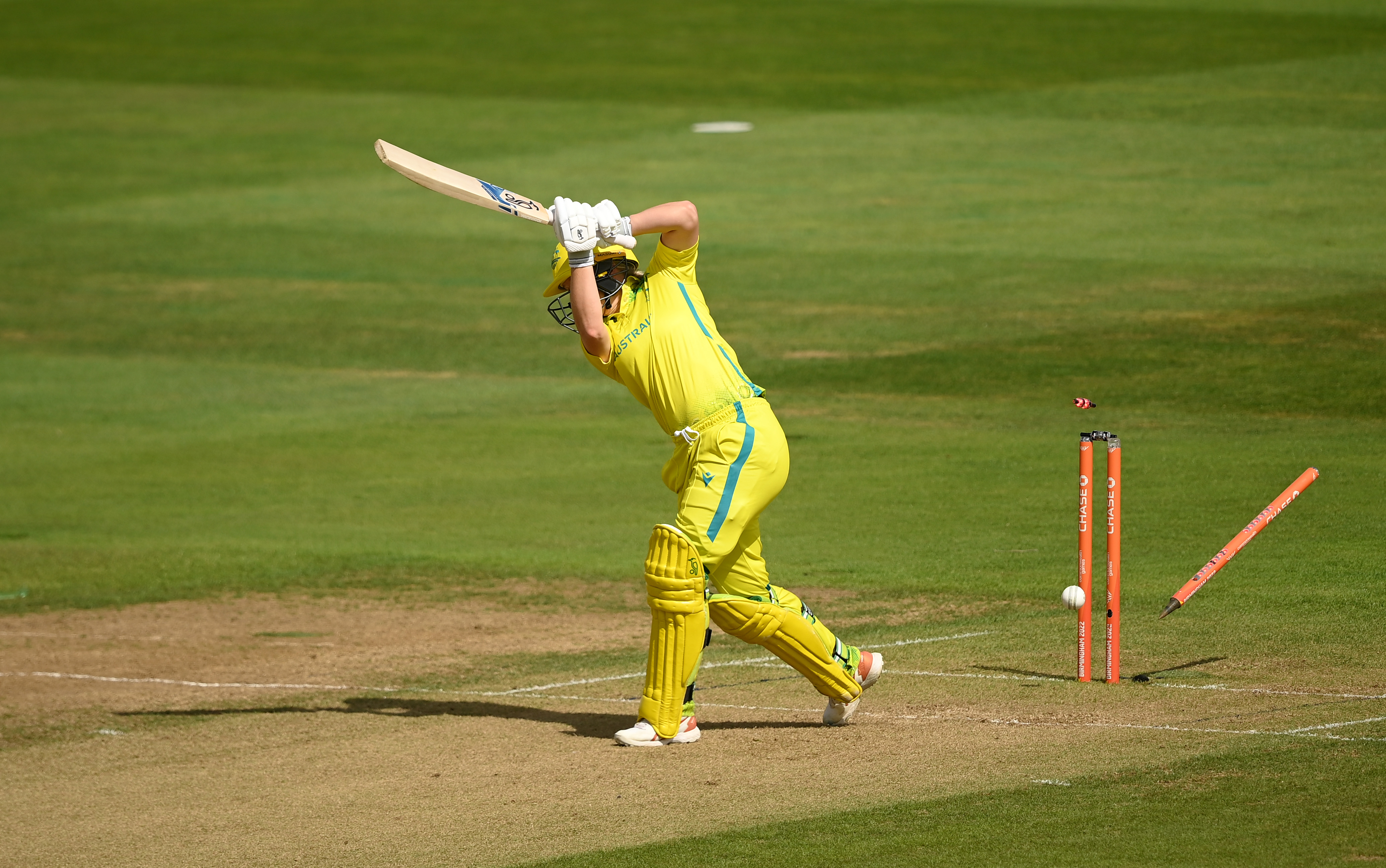 With Alyssa Healy struggling for runs all through the competition, Australia have lost their opening wicket at an average of 8.5 runs per over, which is the second-worst among all the teams.

The Meg-Lanning-led side have all their bases covered heading into this marquee clash and will hope for their premier batter in Healy to get back into form and help Australia add yet another title to their kitty.

The 32-year-old was the player of the finals in the 2020 T20 World Cup and the recently concluded fifty-over World Cup courtesy of her 75 off 39 deliveries and a mammoth 170 off 138 balls exploits that powered Australia to thumping wins.

The experienced batter coming to the party on Sunday is a possibility because we all know that Healy and the World Cup finals are a match made in heaven.

Can Meghna Singh finally get her line right?

While Australia will be banking on Healy to come into her zone, India would be hoping for their opening bowler Meghna Singh to find some consistency in this game.

The right-arm pacer has been guilty of leaking too many runs with the new ball, which has often allowed the opposition batters to get off to a flyer in the powerplay. 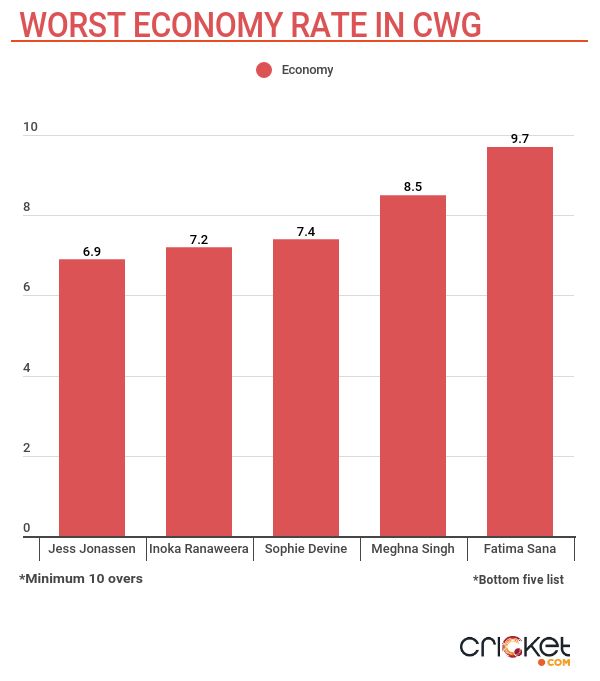 In the four innings, she has bowled 11 overs thus far and conceded 93 runs at an economy rate of 8.5 runs per over, which is the second-worst among bowlers with a minimum of 10 overs in the competition.

With the Australian batters known to dominate proceedings in the field restrictions, Harmanpreet would be hoping for her swing bowler to get her line right and help India create early inroads and inch closer to creating history.

A gold medal would mean so much to women's cricket in India, which is still in the shadows of their male counterparts, and this match could well be the catalyst behind India's white-ball revolution.