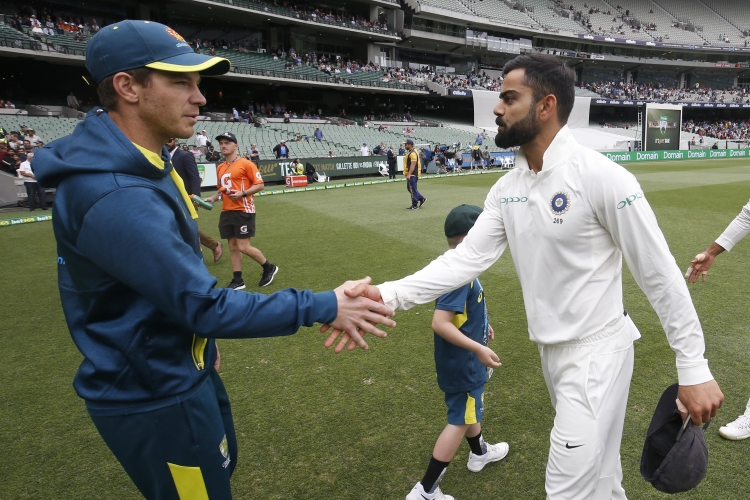 Cricket Australia media release
India-Australia Test series to begin with day-night game in Adelaide
As per BCCI's demands, there is a week's gap between the Boxing Day Test at the MCG and the New Year's Test at the SCG

The battle for the Border-Gavaskar Trophy will begin with a day-night encounter at the Adelaide Oval on December 17, followed by Tests at the Melbourne Cricket Ground (December 26), the Sydney Cricket Ground (January 7) and the Gabba (January 15).

The Adelaide fixture will be the first day-night Test played between the Australian and Indian men’s teams, adding historic significance to a series between two of cricket’s greatest rivals.

Neither side has lost a day-night Test previously, with the Australian men’s team winning all four twilight Tests in Adelaide against New Zealand, South Africa, England and Pakistan, and India winning its only encounter at Eden Gardens versus Bangladesh in 2019.

The Australian men’s team is currently ranked No. 1 on the International Cricket Council’s Test standings, however India will be buoyed by the knowledge it has won three of the previous four series against Australia, including a first ever series win on Australian soil in 2018-19.

India announced their squads for all three formats with Rohit Sharma the notable name missing due to a hamstring injury sustained in the Indian Premier League. The team will be led by Virat Kohli and has all the usual suspects. 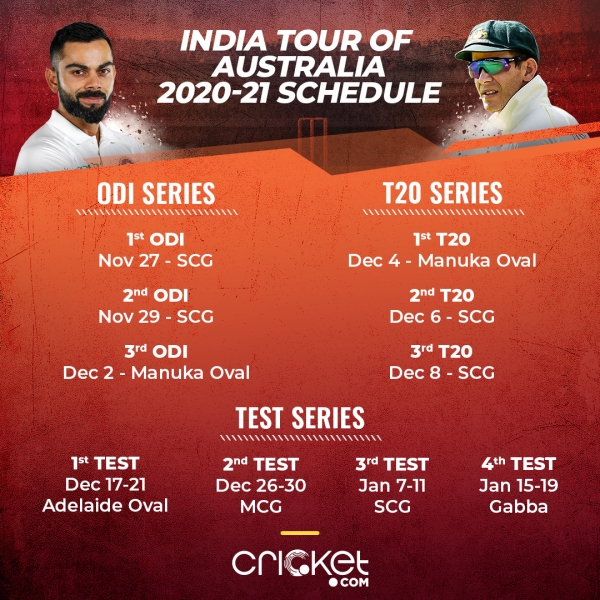 Both white ball series will be keenly contested. The Australian men’s team is fresh from an away ODI series win over world champions England, while India holds a slight edge over its rival in the 50-over format with a 12-10 win-loss record against Australia over the past five years.

The Australian men’s team is currently ranked No. 1 in the world in the ICC’s T20I rankings and posted a thrilling 2-0 away series win over India last year. India, however, holds a 5-4 win-loss advantage over Australia in its past ten T20I matches.

Nick Hockley, CA’s Interim Chief Executive Officer, thanked the Board of Control for Cricket in India for working constructively with Cricket Australia despite the challenging coronavirus pandemic.

“Across all three formats, Australia and India represents one of the great rivalries in world sport and we are delighted to welcome Virat Kohli’s outstanding squad to Australian shores this summer,” Hockley said.

“We have worked closely with the BCCI for many months to bring this tour to life, and I cannot speak more highly of the professional, thorough and collaborative manner with which they have approached this tour in these extraordinary and complex times.

“I would like to express my gratitude to everyone at the BCCI for the faith and support they have shown in the plan we have developed, which we believe will result in a safe and successful summer for all involved.

“We would also like to especially thank the NSW Government for allowing players from both teams to safely prepare during quarantine, as well as other governments and health authorities who have worked with us to host a series which, I have no doubt, will live long in the memories of all who experience it.

“I would also like to thank everyone across Australian cricket and our valued partners for working tirelessly to navigate through the challenges to deliver a schedule that will bring joy and excitement to hundreds of millions of fans at home and abroad.

“The safety of the Australian community and all participants is our highest priority and we will continue to work with governments across Australia to ensure the schedule proceeds in line with relevant directions and biosecurity protocols. In relation to the Boxing Day Test at the MCG, we are working with the Victorian Government and the Melbourne Cricket Club on plans to safely host spectators at the iconic event with details to be confirmed in due course.”

NSW Minister for Jobs, Investment, Tourism and Western Sydney, Stuart Ayres said: “The NSW Government is pleased to support Cricket Australia and ensure that Australians get to see a Summer of cricket.”

NSW Acting Minister for Sport, Geoff Lee said: “We can’t wait to host one of the world’s best teams for a terrific summer of cricket with the SCG ready to host the third test in January. NSW loves its cricket and we are so pleased we could work hand in hand with Cricket Australia to make this series happen.”

In addition to the international fixtures, CA can also confirm dates for tour matches ahead of the Vodafone Test series. India A will take on Australia A at Drummoyne Oval (December 6-8), and India will play Australia A in a day-night match at the Sydney Cricket Ground (December 11-13).

India’s squad will arrive in Sydney on November 12 subject to Australian Border Force travel authorisation and the appropriate departure-approvals. The team will quarantine in Sydney prior to the first match of the series on November 27.