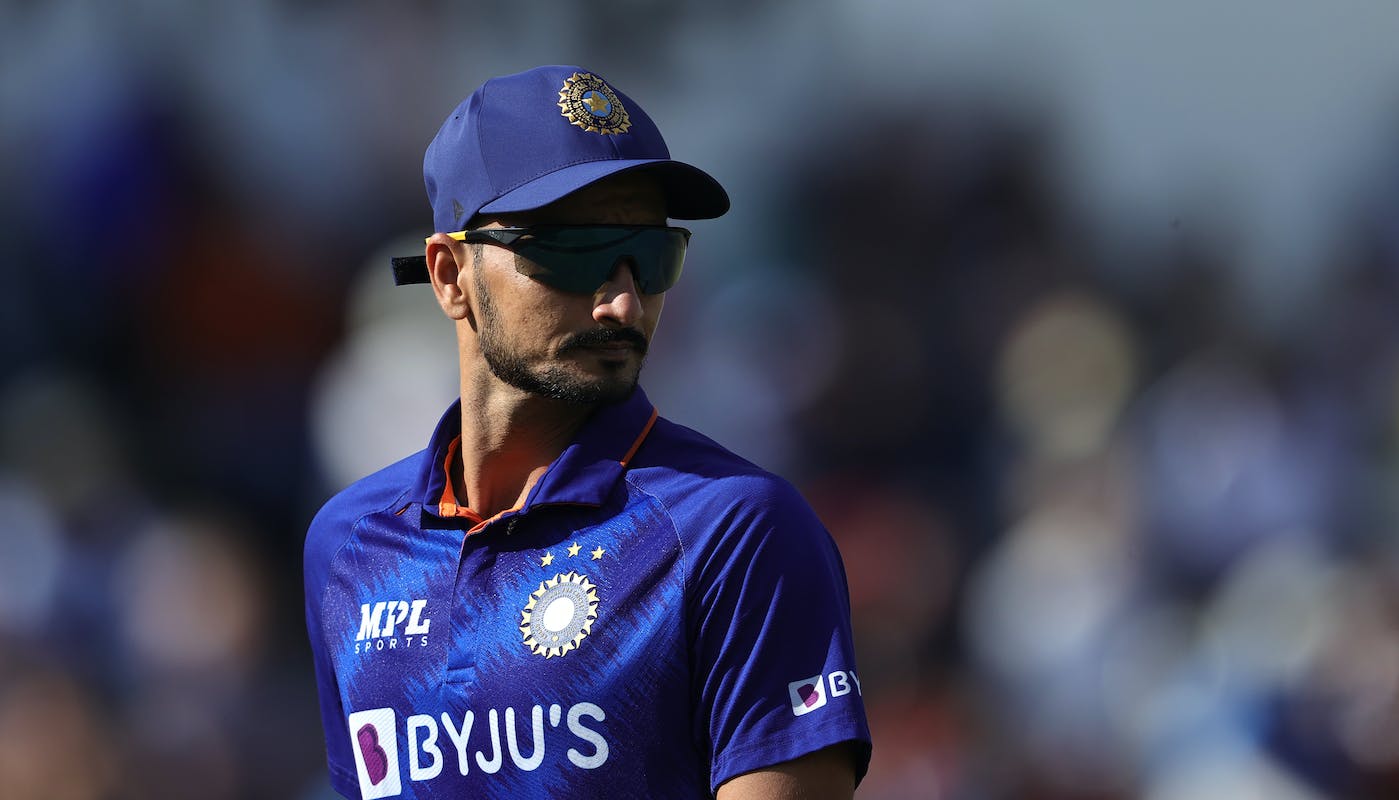 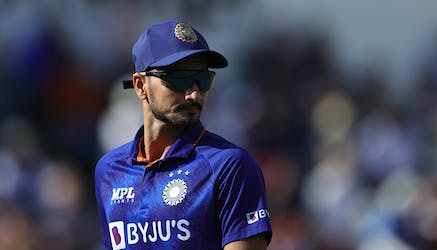 The slower delivery is a necessary weapon in modern-day cricket. Just when the batters think they have adjusted to the bounce of the pitch, it is necessary to surprise them with one that waltzes off the surface to miss the bat swing. It doesn’t just get you wickets but also contains runs.

From Steve Waugh’s effective execution of it in the 1987 World Cup to Adam Milne’s bamboozling spells in The Hundred, the slow ball has climbed up the ladder in efficiency. India had its own wizards of the slower ball, and in the current generation, Harshal Patel remains one of the finest exponents of it.

When you have figured out his slower one that moves inside the bat and pad, he can also go for the one that evades the bat and the tram line. When that is done, he can produce his slowest delivery, which skids off the surface and disappears from the line of sight. It's not just the variations, but the unpredictability of his variations that do a batsman in. With the T20 World Cup in Australia just two months away, India will anxiously await his recovery from a rib injury he suffered during the recent tour of West Indies. 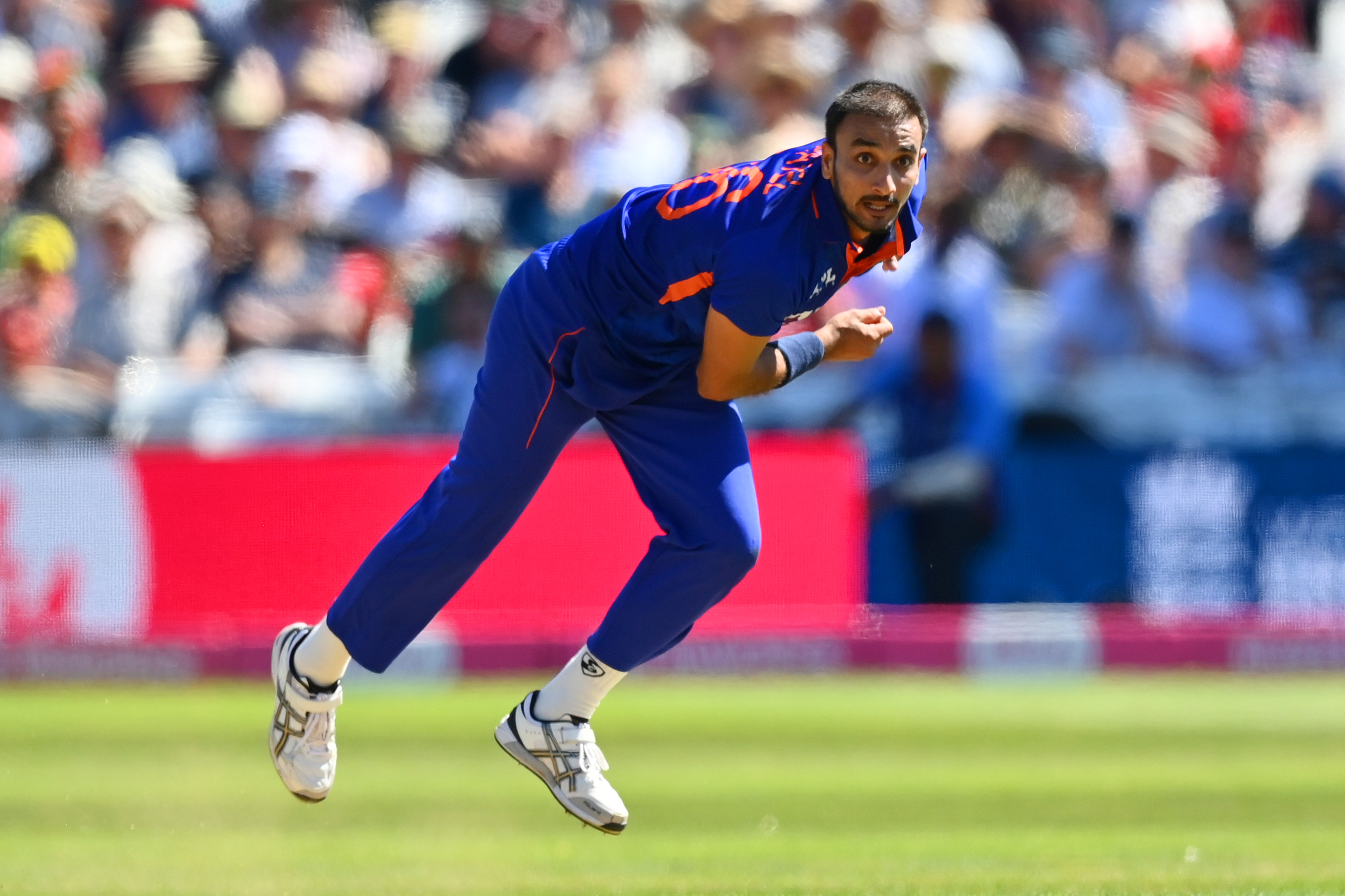 It’s not that India are bereft of standbys for the 31-year-old. There are others among India’s vast fast-bowling arsenal who can do a lot with the ball, but Harshal remains unique in what he does. One can even chalk off his importance with his stats against England in July – three T20Is, four wickets, 8.45 economy and an average of 23.25.

Since making his debut in November last year, Harshal has played 17 of India’s 23 T20Is and claimed 23 wickets at an average of 21 and an economy of 8.6. During this period, Bhuvneshwar Kumar is the only fast-bowler to play more matches (19) as the team saw four different captains in the shortest format and an unprecedented personnel rotation.

Harshal has now bowled in India, England and Ireland while having an understanding of the surfaces in the Caribbean. His numbers are pretty good for a newcomer and someone who mostly bowls at the death.

Team captains who have benefited from Harshal’s presence know better. After a family tragedy forced the pacer to leave the IPL 2022 bio-bubble, Royal Challengers Bangalore were taken apart by an out-of-form Chennai Super Kings who scored 216/4 in 20 overs. RCB lost the game by 23 runs and captain Faf du Plessis had no illusions of what they were missing.

“You see the value of Harshal, and what he offers. He has the ability to stop the game. We missed that tonight, we had a similar tone to the bowling. We lacked the variety we needed in our attack. Hopefully, we can have him soon again,” du Plessis said after the match.

Analyzing the same game for Cricket.com, former England opener Nick Knight said: “Even if RCB bowlers had bowled them out for 120, they'd still miss Harshal because it might be 80.”

“He can read the batter's mind and knows what they are thinking and bowls exactly what they don't. That's a great skill not many can do. No one's gonna fill it (Harshal's role), it's a given.”

The return of Deepak Chahar by October might cause the Indian fans to look away from Harshal before the World Cup. Chahar has been crucial with the new ball for India in the last couple of years and has also proved to be a capable batter in the lower order. However, India are in need of someone who can shoulder the responsibility of bowling at death.

Bhuvneshwar, with an economy of 8.8 in the last 10 months, is the safest bet for the job. But India need more of him with the new ball, sometimes more than just two overs. This is where Harshal had become integral to the team. The Haryana pacer has bowled 25.1 overs at the death since making his debut, 13 overs more than Bhuvneshwar and 16 overs more than Avesh Khan. Around the world since November, only Ireland’s Mark Adair has bowled more at death than Harshal. 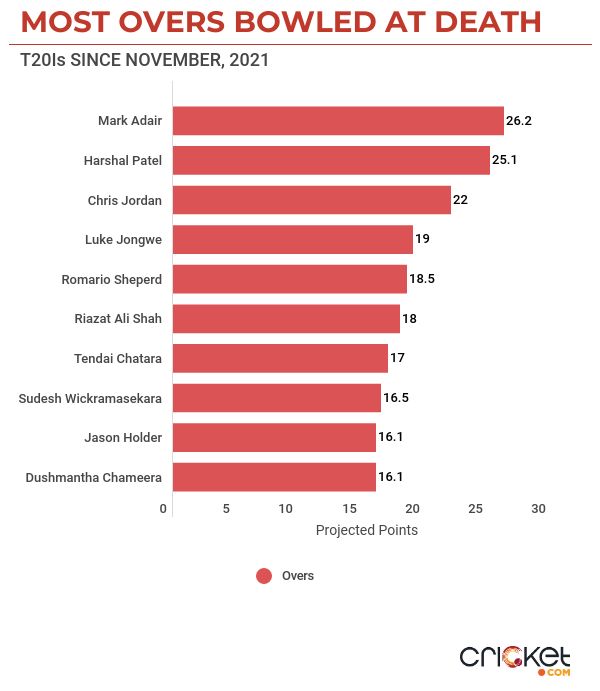 When it comes to batting, Harshal has the experience to back himself. He has opened for Haryana in the Syed Mushtaq Ali Trophy since 2016 and has three T20 fifties and nine 30-plus scores to his name. In the practice T20 match against Northamptonshire in July, India were reeling at 72/5 by the 12th over after losing the likes of Suryakumar Yadav, Ishan Kishan and Dinesh Karthik when Harshal walked out. In the next seven overs, Harshal added 60 runs alongside Venkatesh Iyer on his way to a 36-ball 54 (5x4, 3x6). As a result, India finished at 149/8 in 20 overs.

Jasprit Bumrah (if he is fit) and Bhuvneshwar are the automatic picks for the World Cup squad while the likes of Avesh Khan, Arshdeep Singh, Chahar and Harshal are the likely contenders for the third pace option on quick pitches in Australia.

Harshal will most likely be at the top of the pile if he can recover before the tournament. He has proved that his 32 wickets in IPL 2021 was no fluke and the T20 World Cup is the best platform for him to become indispensable for India. Knight’s words on Harshal’s importance for RCB might soon be applicable to the Indian team.

“There are certain players when you give them the ball or the bat, you know everything's gonna be okay. That's what Harshal Patel gives them,” he said.