India in complete control of first Test against West Indies

India in complete control of first Test against West Indies

Kohli and Rahane put on a century-run stand for the visitors.

At the end of day three of the first Test between West Indies and India, the visitors find themselves in complete control as they gained a 260-run lead.

While Virat Kohli and Ajinkya Rahane consolidated India’s lead in the final session, the world number one team had to overcome a frustrating hour of play at the start of the day. West Indian captain Jason Holder, as he has done often in the past, played a handy knock to take his team past the 200-run mark.

Holder was well supported by Miguel Cummins who played his part to perfection. Cummins was at the crease for 45 deliveries and did not score a single run, thus creating a West Indian record for facing the most balls without scoring in a Test innings. In fact, having spent 95 minutes in the middle, he also recorded the second longest duck (behind Geoff Allott’s 101-minute effort against South Africa in 1999).

Holder’s 39 helped West Indies add 33 runs to their overnight total and the hosts were bowled out for 222, handing India a 75-run first innings lead. Ishant Sharma, who secured a five-wicket haul on day two, ended with bowling figures of 5/43.

India’s openers Mayank Agarwal and KL Rahul saw off the new ball threat, but the former was dismissed by Roston Chase soon after the lunch break for 16. While the leg-before-wicket decision looked plumb on first viewing, replays showed that the ball was spinning past the leg stump. Agarwal, after consulting Rahul, had decided against reviewing the call, a decision he surely regretted immediately after.

Rahul, meanwhile, looked to be in control just like he had done in the first essay. But once again, just as he seemed set to convert a start into a big score, he attempted a paddle sweep and was bowled by Chase. After his dismissal, the Karnataka opener hit his bat on the ground in disgust as he fell for 36 this time after having scored 44 in the first.

While Chase had taken the first two wickets, it was Kemar Roach who was the most threatening bowler on display once again. In 12 overs, the 31-year-old has conceded just 18 runs and has the highest dot ball percentage (87.5) among all West Indian bowlers in this innings so far which shows how he was able to build pressure on the Indian batsmen. He also induced the highest percentage of false shots (18.0).

Roach got his due reward with the wicket of Cheteshwar Pujara, who was bowled for 25 by a delivery that angled in shapely to beat the Saurashtra batsman’s defence. Later in the day, the 31-year-old pacer should have had another wicket, having trapped Rahane plumb in front of the stumps. But umpire Rod Tucker made an erroneous judgement and Windies skipper Holder couldn’t make his mind up about the review within 15 seconds.

At that time, Rahane was on 48 and in the next over, he reached his 19th Test half-century. The Mumbai batsman, whose spot in the XI was under pressure before the start of the match, has managed two 50+ scores in the same Test for the first time since December 2015.

Kohli, meanwhile, also brought up his fifty late in the day. The Indian skipper, who started aggressively in the first innings before perishing for 9, was in a more cautious mood this time around. Unbeaten on 51 at the end of day’s play, he has only hit two fours in his innings so far. In fact, the Indian approach itself has been prudent in this innings, with no batsman having a strike rate of over 50 so far.

India’s captain and vice-captain will be hopeful of building on their 104-run partnership on day four as the Asian side look to begin the ICC World Test Championship with a win. On the other hand, the West Indies will be looking at triggering a batting collapse as they will not want India’s lead to grow over 350 if they have to stand a chance here. 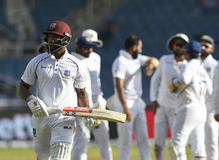 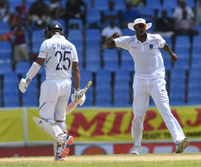