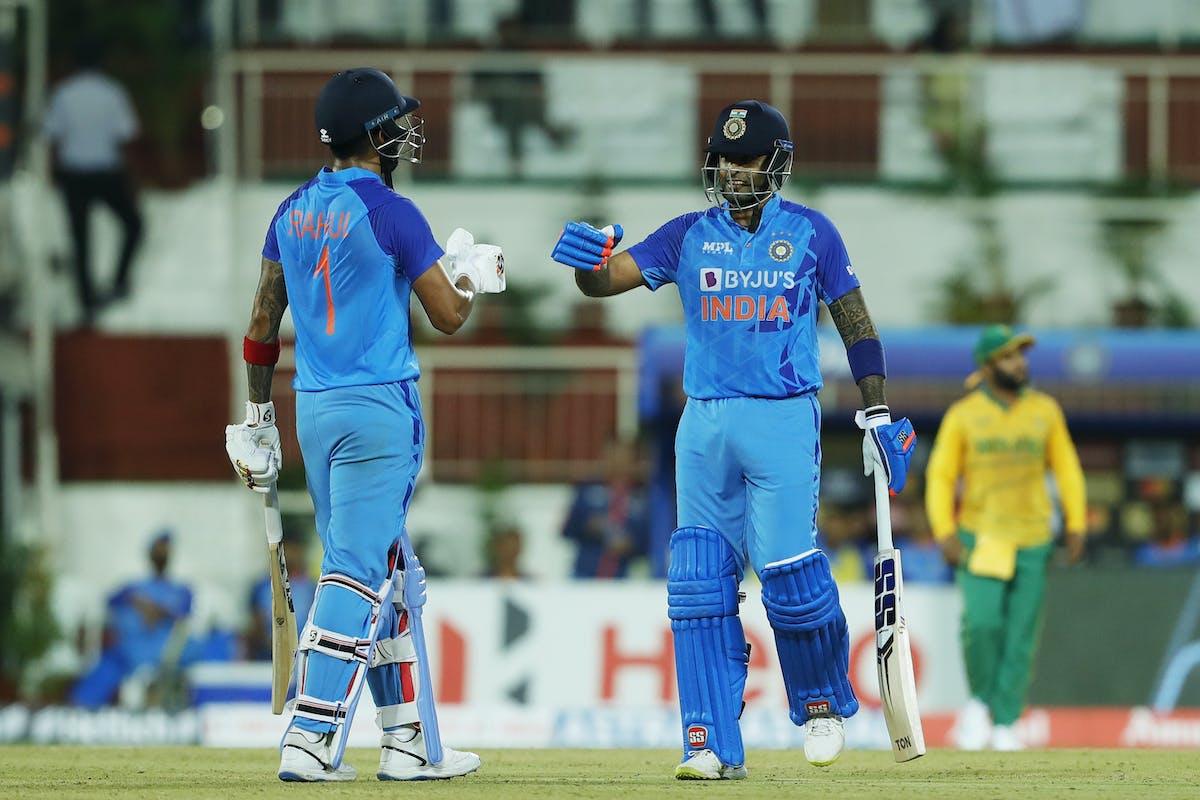 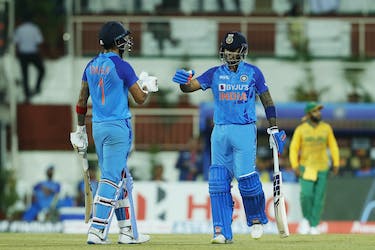 Amidst all the off-field drama, the resumption of cricket in the country — post a rather weird three-day break — comes as a welcome change

Is it possible for a single piece of (unofficial) information to overshadow an entire series? Turns out, it is.

On Sunday at the Barsapara Cricket Stadium in Guwahati, India and South Africa will lock horns once again after a three-day break, but such has been the magnitude of what’s happened off the field that it feels like everyone has kind of forgotten that there’s a series that’s still happening, and is very much alive.

On September 29, a day after the first T20I, news broke out that Jasprit Bumrah will take no part in the T20 World Cup due to suffering a lower back stress fracture. The ‘will not take part’ has since turned into ‘may yet take part’, with certain reports claiming that the speedster’s injury is not as bad as initially feared, but, nevertheless, chaos has ensued in the past 48 hours.

“What will India do without Bumrah?”

“Who will replace Bumrah?”

“Will Bumrah make it to the Australia Tests?”

“Is the IPL to blame for this?”

“What is happening at the NCA?”

So many questions. Endless queries and speculation. Non-stop madness.

Amidst all this drama, the resumption of cricket in the country — post a rather weird three-day break — comes as a welcome change.

1-0 up in the series, having thumped South Africa in Thiruvananthapuram, India will be aiming to put off-field distractions away to seal the series and break the Proteas jinx. Despite all that’s happened across the past 48 hours, the objective for the hosts, heading into Sunday’s clash, remains unchanged: build momentum and confidence ahead of the World Cup while simultaneously learning more about the side.

The learnings will, of course, happen only if the team is pushed to the limit so the Men in Blue, oddly enough, will be hoping for a stronger South African response in Guwahati.

As far as the visitors are concerned, it will be all about putting the first T20I completely behind and starting afresh, almost treating the series as a two-match affair. 10 months ago, the Proteas showcased incredible bouncebackability against India in the longest format; Temba Bavuma’s side will need to do the same come Sunday, only this time in coloured clothing.

Mind you, for the Proteas, on the line is not just the series, but also their stupendous record of never having lost a bilateral T20I series in India.

But regardless of who comes out on top, cricket will take center stage in Guwahati for four hours and that feels like a tonic the country desperately needs, a much-needed get-away from all the off-field scuttlebutts. 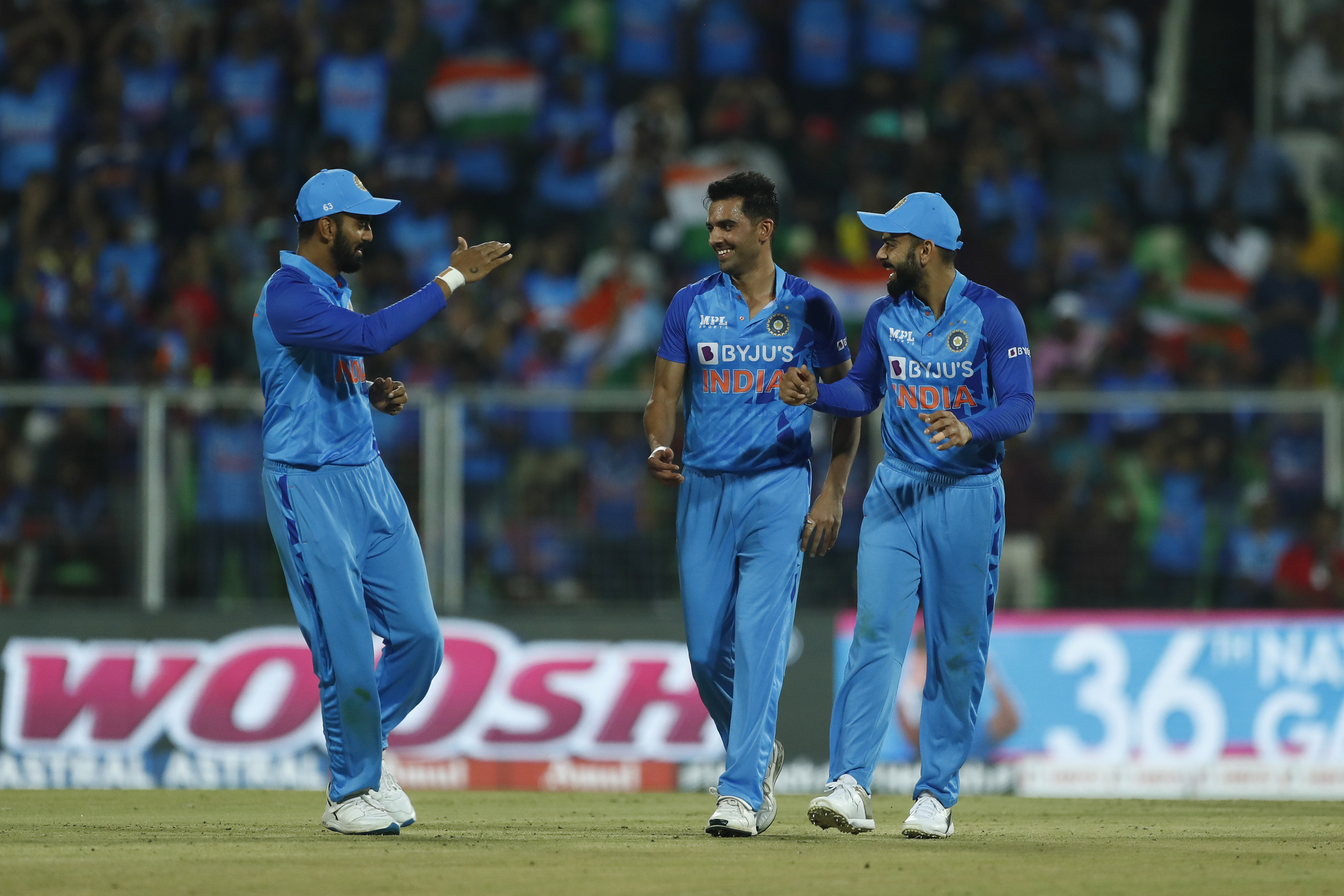 Not too long ago, there were genuine fears that Deepak Chahar would end up playing no games in lead-up to the T20 World Cup, and subsequently miss the competition, due to the severity of the back injury he’d sustained. But with just days left for the global event to commence, here is Chahar — not just back playing but now with a realistic chance of making it to the final 15.

In sport, as is in life, one man’s misfortune is another man’s opportunity. So with Bumrah ruled out of the ongoing series, and looking highly unlikely to make it to Australia, the door has opened for Chahar to barge into the squad and, who knows, perhaps even contest for a spot in the starting XI come the Pakistan clash at the MCG on 23rd.

It is never ideal to judge a player on the basis of a match or two, but in the case of Chahar, it does seem that the prospect of him breaking into the final fifteen could very well depend on how he fares in the final two games of the ongoing series.

The 30-year-old had a dream start to the series in Thiruvananthapuram, wreaking havoc with the new ball, and one assumes at least one more performance of the same ilk will all but guarantee him a berth in the main squad for the World Cup.

However, there is also always the risk of Chahar bowling himself out of contention in the span of two games.

For while it might look like Chahar is at the very front in the pecking order, the presence of Mohammed Shami in the standbys means that there’s always the possibility of India drafting in the veteran should things go south for Chahar. It is worth remembering that skipper Rohit, not too long ago, spoke highly of Shami’s quality and the experience he brings to the fore.

But all said and done, it looks like the ball, as things stand, is in Chahar’s court. His fate is in his own hand and lying in front of him, possibly, are the two biggest games of his career.

Shamsi’s struggles versus India starting to get out of hand 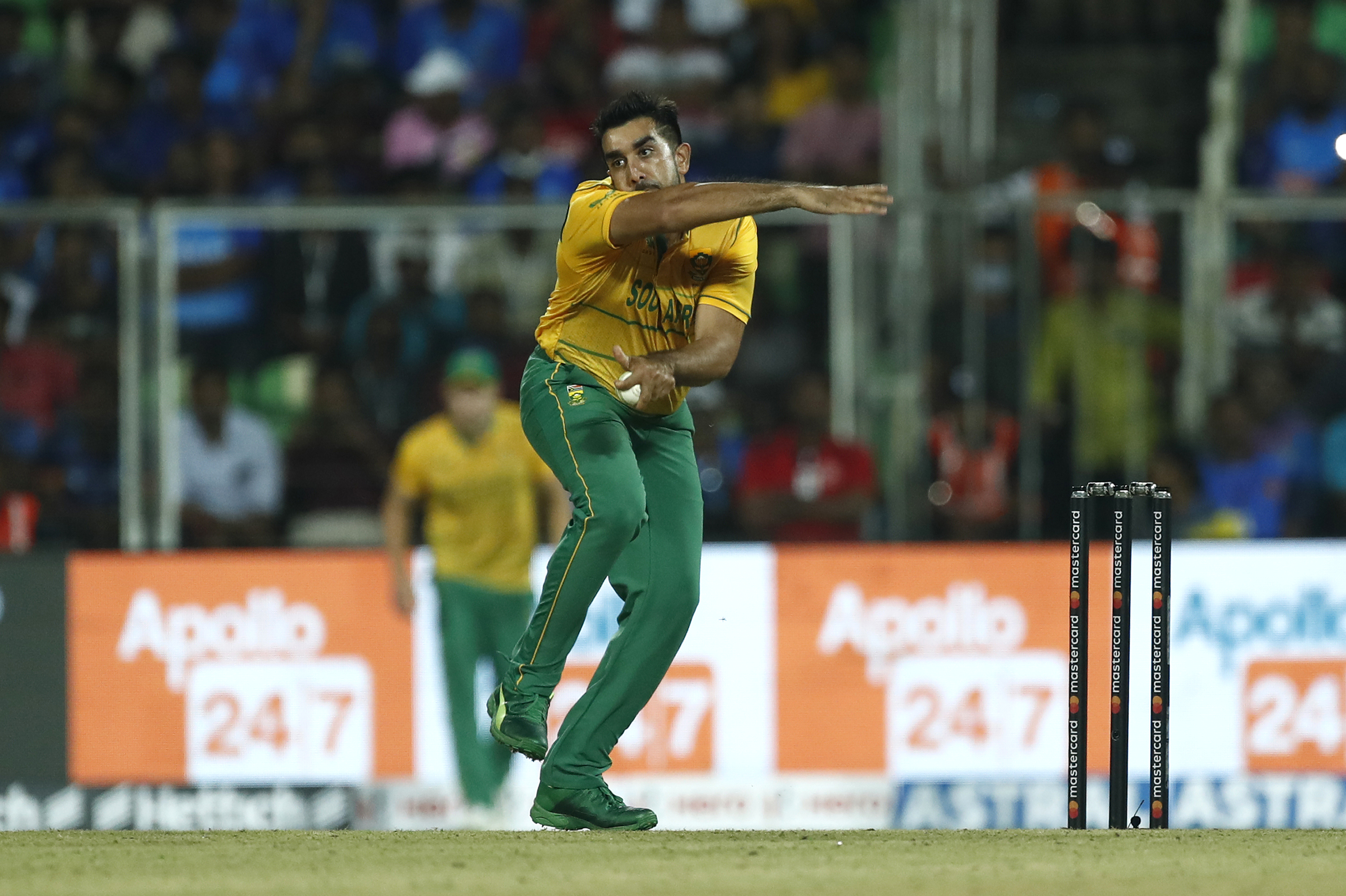 On paper, he’s the number two ranked bowler in the world. But the truth is that Tabraiz Shamsi, across the five T20Is he’s played against India this year, has been an utter liability.

12.5 overs, 129 runs conceded, a solitary wicket taken and an economy rate of 10.18: for Shamsi, it’s been a horror show every time he’s come up against India this year.

What unfolded in the first T20I in Thiruvananthapuram was an all-too-familiar sight.

After the pacers had done an outstanding job to keep the visitors in the contest, skipper Temba Bavuma trusted his go-to man to keep the choke-hold on the Indian batters. The target was just 107 but on a tacky wicket, runs were hard to come by and the hosts’ batters could find no rhythm whatsoever. South Africa, hence, were still alive in the contest.

However, as it turned out, Shamsi’s spell ended up turning the game fully in India’s favour, the wrist-spinner’s thirteen-run 12th over causing an irreversible momentum shift.

He finished with figures of 0/27 off 2.4 overs and the spell continued a five-match streak against India in which Shamsi had leaked at over 9 runs per over. That it came in a low-scoring encounter made his spell in the first T20I a truly disastrous one.

Purely in terms of how badly Shamsi has matched-up against India, there’s probably a case for South Africa to leave 32-year-old for the next encounter, if not the last two. But the quandary for the Proteas is that, across the past 18 months, the wrist-spinner’s struggles have almost exclusively been against India. He’s pretty much been world class against every other opponent. 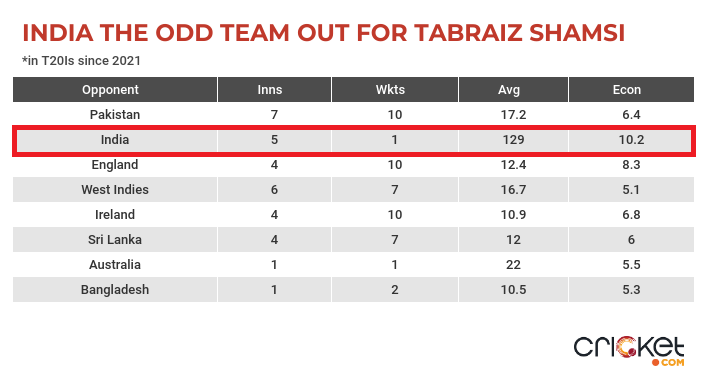 Given that, it looks highly unlikely that the Proteas would leave out their talisman, not least considering he’d be leading the spin attack come the T20WC. But if the visitors are to level the series, they’ll need their talisman to snap out of the horror run and deliver a performance of note against a side that seems to be his kryptonite.

Expect India to field an unchanged XI. With Bumrah likely to miss the T20WC, they’d want both Chahar and Arshdeep to get as much game time as possible. Plus, while Ashwin bowled an outstanding spell in the first match (0/8 off 4), they’d want the veteran tested against the destroyers up top, not just the lower-order.

But for any knock in training, the Proteas will also, in all likelihood, field the same XI.