Flashback to 1979: India and Sri Lanka began their ODI rivalry with a World Cup game. Fairly new to international cricket at that point, Sri Lanka defeated a full-strength Indian side which was struggling to find its feet in the global event.

Since then, a budding India-Sri Lanka rivalry was overshadowed by the more politically fraught one between India and Pakistan. Which is not to say India and Sri Lanka didn’t have their own thing going: between 1991 and 1995, India had won 57.1 percent of their games against Sri Lanka. In the next five-year cycle, Sri Lanka took the upper hand winning exactly the same proportion - 57.1 percent - against India. Between 2001 and 2005, India once again became the dominant rival, 56.5 percent of contests between the two sides.

Domination swung between the two sides until that point when Sri Lanka failed to find adequate replacements for quality players such as Mahela Jayawardene, Kumar Sangakarra and Tilakaratne Dilshan, among others. The once-enthralling contests between the two Asian nations became timid affairs, with the Sri Lankan side becoming a punching bag for their Indian counterparts over the last five years.

India has won eight of their last 10 completed ODIs against Sri Lanka, including the horror home series for Sri Lanka in 2017 where India defeated them 9-0 across all three formats.

The latter half of this World Cup has seen Sri Lanka begin to stitch a team together and produce some good results – but against an in-form India on Saturday, they have a mountain to climb, with no tangible reward waiting for them at the top.

With at least two more games to go for the Men in Blue, Rohit Sharma (currently 544 runs) is in striking distance of breaking Sachin Tendulkar’s record (673 runs) for the most runs in a World Cup edition. And Sharma should be licking his lips at the prospect of facing the Lankans, who are one of his most preferred opponents since he started to open the innings – in fact, two of his three double hundreds in ODIs has come against the islanders.

To keep Rohit from doing that kind of damage, the Lankans have to get him out before he crosses 30. Once he goes past that mark, he averages an intimidating 125.6. And the short answer is, take your catches. The opener currently aggregates 544 runs; he has been dropped five times in eight games. If those five catches had been held, his aggregate would have been 175; he has added a whopping 369 runs after those drops. Rohit tends to start slow, and the pressure this puts on himself has caused a lot of these chances – that, and the fact that till he gets going he tends to be a bit loose outside off stump. Once he survives those early jitters, though, he is unstoppable, as his four centuries in this tournament show.

Sri Lanka has taken eight wickets during the first powerplay in six games, at a decent strike-rate of 45 balls per wicket -- but three of those wickets came against Afghanistan. Outside of that game, their strike soars up to 60 balls per wicket in first 10 overs. They’ll need to do much better than that if India is not to run up a match winning target, or chase down whatever the islanders set.

Can Malinga do it again?

The veteran Lasith Malinga has played a pivotal role in Sri Lanka posting six points on the table, with bowling figures of 3/39 against Afghanistan, 4/43 against England and 3/55 against the West Indies. He has picked 12 wickets in the tournament when no other Sri Lankan bowler has gone past five. He would love to lead the Sri Lankan attack from the front for one final time in this, his last World Cup. But he faces an uphill task against India, against whom he has struggled.

You want wickets? Go to Jasprit Bumrah. You want to control the flow of runs? Go to Jasprit Bumrah. Such has been the aura of this Indian pacer – who, ironically, learned the finer points of his game from Malinga himself – that not only is he the joint highest wicket-taker for India in this World Cup (14), he has also been the most economical, bowling at 4.6 runs per over. In fact, he is one of only four bowlers to have an economy of less than six per over in every phase of the innings.

His partner Mohammed Shami has the best bowling average (13.7 runs per wicket) amongst the bowlers who have picked more than 10 wickets in this World Cup. Yuzvendra Chahal is the joint highest wicket-taker amongst spinners, with 11 scalps. And Hardik Pandya has been uncanny with his wicket-taking ability.

The Indian bowling unit, as a whole, averages only 28.28 runs per wicket, marginally second to New Zealand whose bowlers average 28.16 runs per wicket. India has bowled out their oppositions in four out of seven completed games. Gone are the days when bowling used to be India’s weaker suit.

Against that, Sri Lanka’s batting has not clicked in the tournament. In their three victories so far in the tournament, only one was driven by their batsmen when they posted 338 against the West Indies.

The next best is Lahiru Thirimanne, who has averaged only 30 runs per dismissal. The glaring gap between batting averages of the top three and the others highlights the need for Karunaratne, Perera and Fernando to stay in the middle for as long as possible.

India is through to the semis and Sri Lanka is out of the tournament, rendering the result of this game inconsequential. But Sri Lanka, which stunned pre-tournament favourites England and threw the table into turmoil, will want to go home with the bragging rights attendant on defeating India, the other favorites.

India brought in Bhuvaneshwar Kumar for Kuldeep Yadav and Dinesh Karthik for Kedar Jadhav in the game against Bangladesh, in the process taking the unusual step of playing with only five bowlers, with no sixth option to provide cover. It’s hard to figure out what the management will do in this last of the round robin games – a punt might be Mayank Agarwal making his ODI debut. Kuldeep Yadav will in all likelihood return to the eleven given the slow track at Headingley. The management might also want to give Bumrah a bit of a rest.

After winning their previous match against West Indies, the Sri Lankans will in all probability go with an unchanged XI. 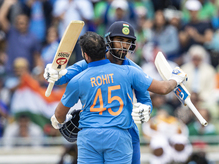