India too hot to handle for Bangladesh on Day 1

India too hot to handle for Bangladesh on Day 1

Mominul Haque began his first day as Bangladesh’s captain by pulling off a feat the previous touring captain to India, Faf du Plessis, couldn’t manage. He won the toss and took the brave call of batting first. Brave because the track had an ample tinge of grass. Brave because according to Virat Kohli, the Indore wicket has shown persistent assistance for the pace bowlers on the opening day of a first-class game in the city. Brave because Indian pacers had bowled at 17.5 runs per dismissal in the previous series.

Kohli also suggested that the Indore track turns out to be beautiful to bat second day onwards. But given Bangladesh’s away record which has seen them bundle out for scores less than 150 thrice in away Tests since 2018, batting on the second day seemed a little far-fetched for them. Three wickets in the first session gave very little idea of what was to come for Bangladesh. The experienced players, Mominul and Mushfiqur Rahim had seen off the difficult first session which had shown exaggerated lateral movement after the visitors were down to 31 for three - a wicket apiece for each of the three Indian pacers.

Going to lunch at 63 for three, the second session was meant to be a little easier for them but an incredible collapse triggered by a terrific spell from Mohammad Shami and a couple of poor judgement of the ball by Bangladesh batsmen saw them fall down to 140 for seven at tea.

After batting for 79 balls, Mominul shouldered arms to a straight delivery from Ravi Ashwin, a decision extremely peculiar as the off-spinner was not turning the ball anyway. The following batsman, Mahmudullah, who has been the highest averaging batsman for Bangladesh since 2018 (41) looked rattled by Ishant Sharma short ball barrage at him. Ashwin took the benefit of his nerves when the right-hander premeditated a sweep shot against the offie only to see the ball clatter into his exposed set of stumps.

Bangladesh kept showing signs of stitching a partnership together until Mohammed Shami derailed them completely with his swing and pace at the stroke of tea. In an immaculate display of bowling, he set up Rahim with three deliveries outside off-stump to which the right-handed batsman offered no shot. Eyeing a well-deserved cup of tea, Rahim was aiming to leave the ball again but did not notice Shami coming wide of the crease. This was a successfully aimed inswinger that hit the top of his off-stump.

With Mahmudullah and Mominul back in the hut already, Shami had broken the back of Bangladesh’s innings completely with a peach. The ball was reminiscent of Shami’s delivery to dismiss Faf du Plessis in the second innings of the Visakhapatnam Test. The only difference being that de Plessis had no intention to offer a shot while it was too late for Rahim to get his bat down in time.

Shami did not stop there. Next delivery, he bowled another inswinger which was too hot to for Mehidy Hasan who was facing his first ball in the innings. Shami hit his pads, the umpire did not take much time before lifting his finger and Liton Das at the non-striker’s end turned his back on Hasan’s plea to take the decision upstairs.

From 140 for five, Bangladesh collapsed to 140 for seven at tea and then further down to 140 for eight when Ishant Sharma started the third session by inducing an outside edge of Liton’s bat. Virat Kohli pouched a low catch at first slip completing an astonishing team hat-trick and also breaking the dismal run of drop catches by the side in the slip cordon.

That remains the only aspect of the game where the Indian side let themselves down. India dropped five catches, one by skipper Kohli, a rather difficult one by the wicketkeeper, Wriddhiman Saha and three by Ajinkya Rahane, each successively easier than the previous one. The fact that three of these dropped catches came off Ashwin’s bowling only makes it fair for him to take two wickets purely on batsmen’s misjudgement.

Bangladesh managed to add 10 more runs to their total to finish at a below-par total of 150. In reply, the visitors did get Rohit Sharma out early but the dogged pair of Mayank Agarwal and Cheteshwar Pujara knocked off the majority of the deficit with an unbeaten stand of 72 runs from 112 balls for the second wicket.

Pujara’s innings of 43 runs from only 61 balls consisting of seven glorious boundaries was a sign of the long day in store for the visitors. After losing the toss, Kohli said that he would have preferred to bat on the second day instead of the first and the things have panned out exactly the way the Indian captain wanted. 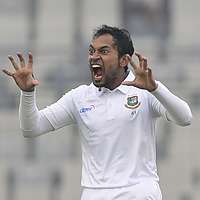 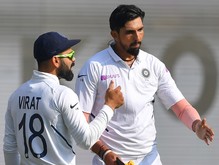