Day One: A familiar script for England 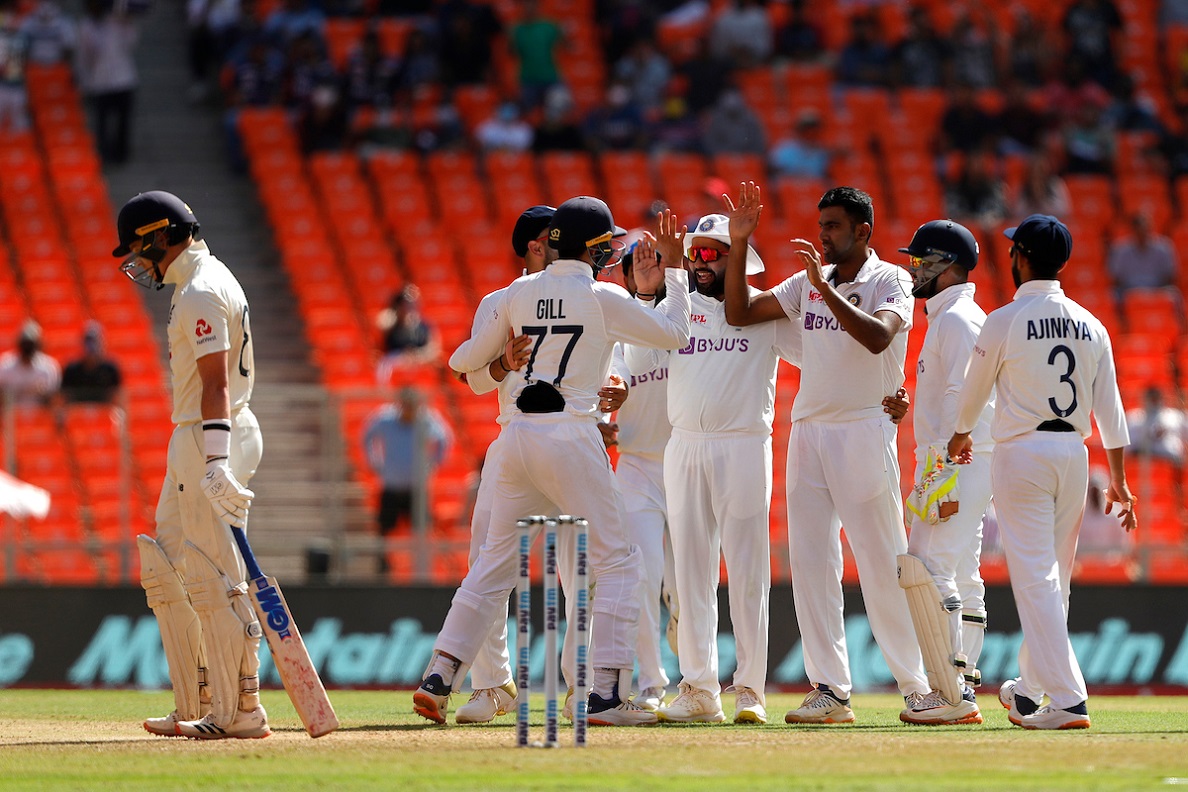 Day One: A familiar script for England

Despite easier conditions, England's batting woes refused to go away. They were bundled out for 205.

Joe Root and Ollie Pope added 86 runs for the fifth-wicket in the first innings of the first Test. None of the 65 England pairs since has crossed the 50-run mark. This has been the driest patch in England’s cricket history. Drier than the pitch in this Test.

Before the Test, Joe Root asked his batsmen to be brave. Bravery comes in all shapes and sizes. For three of the younger English batsmen, it was about coming down the track to counter spin. It worked for a while but was also the reason for their downfall.

England batsmen have loathed facing Axar Patel. This statement would have felt laughable ahead of the series. But, a bowling average of under 10 is not an everyday achievement. Even after two Tests and 18 wickets, it is a rarity. In the last two Tests, Axar flummoxed England batsmen on two aspects - length and trajectory of the ball after hitting the surface.

Mathematically, coming down the wicket was a decent ploy. No batsmen had lost his wicket to Axar coming down the track for 18 deliveries in the last two Tests. The first such shot Zak Crawley attempted in Axar’s second over – eighth of the innings - resulted in a boundary past Axar himself. He tried the same two more times in the over but Axar pulled his length back. The next ball was slightly fuller. The fielders behind Crawley had sensed impatience. He came down the track again but made two mistakes. The shot attempted was aerial and he was not to the pitch of the ball. The fielder at mid-off, deeper than usual, did not move an inch. Sometimes, being brave and looking foolish are outcomes of similar choices.

Next was the turn of Ollie Pope. Ravi Ashwin went wicketless in the first two sessions as he did not get enough purchase. Thus, Pope's time at the crease was a smooth sail for a while. He used his feet to around 40% of balls and looked starkly different from his earlier self. While he was there, Pope played with a control of around 90%, his best in the series.

In the sixth over after Tea – 62nd of the innings - Ashwin was back to testing Pope on both sides of the edge. In a dismissal not seen before, Pope got an inside edge after coming down the wicket. The ball evaded his front pad and flew to the top half of his back pad. From there, it landed into the waiting palms of Shubman Gill at forward short leg.

While Pope’s dismissal was out of bad luck and not hyper-aggression, the same is not true for Dan Lawrence. He started off with three sumptuous boundaries before the tea interval. For a while, his inclusion seemed a correct move. Either he was right back ready for the cut or down the wicket to attack. There were hardly any in-between moves from him. Lawrence swiftly moved to 46 off 74 and tipped Ben Stokes as the best English batsmen on the day. But, he too fell to premeditated aggression. Lawrence missed a hoick after dancing down the track to Axar in the 71st over. It was the easiest stumping of Pant's career.

Apart from the three dismissals, there was some usual narrative. Crawley’s partner was still hungover from the last Test. The second ball from Axar this morning did not turn, something at least the openers should be ready for by now. As an improvement, Dom Sibley got the bat to it but only an inside edge on to his stumps.

Either side of the lunch interval, it was pace that had England four down. It is fair to say that England batsmen did not waste any time facing pace in between the last Test and this one. At least Joe Root didn't. But, it will be an unfair assessment of Mohammed Siraj's old-fashioned brilliance. In the 11th over of the innings, Siraj bowled natural outswingers to Root. There were play and misses involved. The first ball of the 13th, pitched at a length, jagged back in with Root losing his shape and the ball hitting him bang in front. There was no need for a review. It was a dismissal that Siraj had planned in his mind.

Root’s was not the only dismissal Siraj had planned. Ben Stokes and Jonny Bairstow are the only two batsmen in the XI who are also part of the white-ball setup. Being brave is their natural style of play. In the next eight overs after Root's dismissal, they had added 40 runs.

One of the biggest upgrades for England was Bairstow. There was a valley between his bat and pads against Axar during a pair in the last Test. He rectified this error in this one. Time at the crease brought opportunities. Ishant Sharma in his second spell dished out boundary balls while Axar bowled a couple of half-trackers himself.

Expecting the ball to reverse, India opted to continue with Siraj after lunch. Barstow faced him for the first time ever in the 29th over. Since 2018, Bairstow has twice the batting average on balls moving away than to those coming in. The higher of the two value being around 28. As he informed after the day’s play, Siraj was aware of this weakness. Bairstow found himself caught at the crease to a ball he should have been forward. The dismissal took his tally of being bowled or LBW since 2018 to 22. He joins his skipper on the top of that unwanted record.

Batting did not seem a fidgety affair post lunch. There was no explosion of dust off the surface and no vicious turn. The comfort with which Stokes batted, England's dismissal in the first session started looking poorer.

Stokes batted with aggression interspersed with determined caution. He got well behind the balls to defend and left with precision. To pace or spin, whenever the ball was full, he did not think twice to collect boundaries down the ground. The men around the bat spread out soon.

Trouble began for England and Stokes in the 39th over. India brought on Washington Sundar from the end pacers had operated all day. There was a visible increase in turn and bounce on his deliveries. Ashwin and Axar had induced 4.8% and 5.8% false shots off Stokes respectively. Sundar induced 31.2%. Meanwhile, Stokes reverse swept Axar for a half-century. Continuing the narrative for the series, it was the ball that did not turn which hurt England the most. An arm ball from Sundar struck Stokes in front and ended a promising knock.

For England, the ball dropped soon after tea. Ben Foakes fell in the same over as Lawrence. He edged a straight floater from Ashwin to slip. Axar and Ashwin took care of a right and a left-hander in England's tail. This was after they crossed 200 for the first time since the first innings in the first Test.

When it was England's turn to bowl James Anderson was back at his best. For the third time in the series, an incoming ball got the better of Shubman Gill. Two of those got him for a duck in the first over. Anderson finished the day with five maidens.

Rohit Sharma and Cheteshwar Pujara did not allow any further inroads to England in the day. With spinners operating in tandem, Pujara was the more aggressive partner.

With only three front-line bowlers in the XI, England need a special effort with the ball on the second day. Else, ruing a missed opportunity with the bat in the first innings is becoming a familiar script for them. 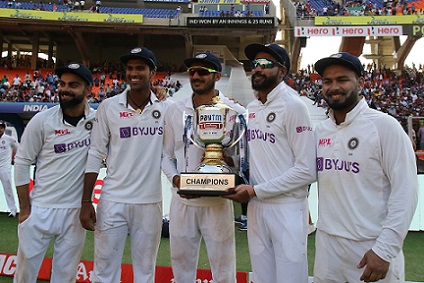 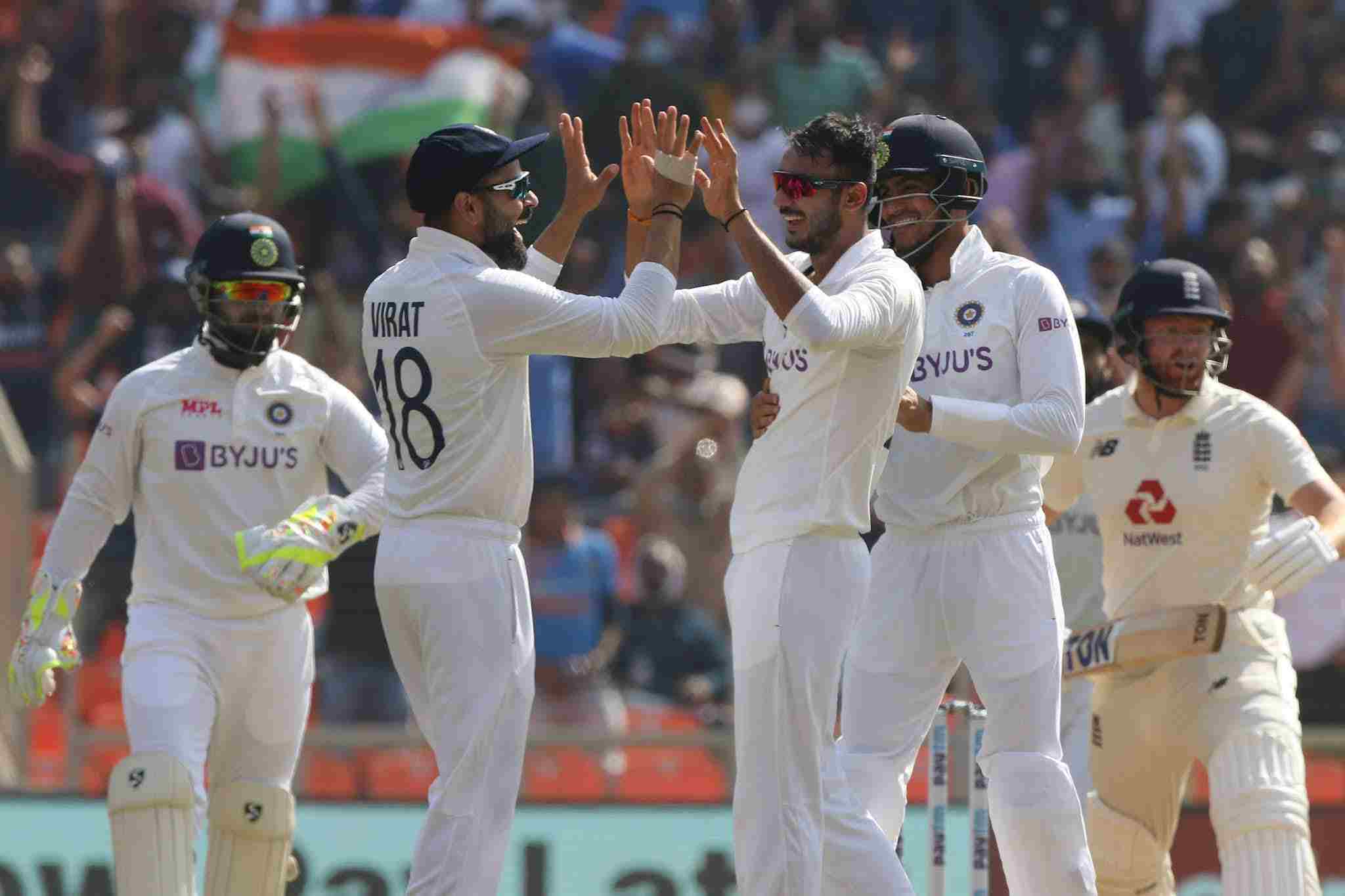 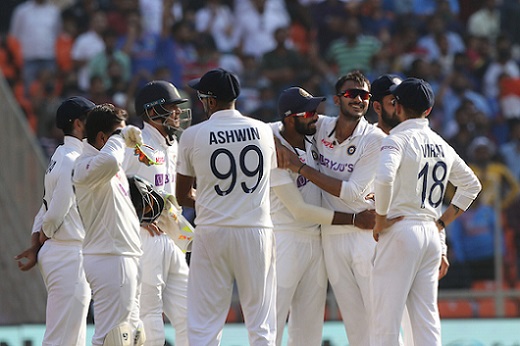