India vs South Africa – Proteas desperate for a win

India vs South Africa – Proteas desperate for a win

India and South Africa will face off in the former’s first, and the latter’s third, game of the 2019 World Cup at the Rose Bowl, Southampton on Wednesday in contrasting moods.

South Africa’s World Cup record is far from ideal for a country that has produced some of the world’s finest cricketers over the last two decades. But even by their usual standards of underachievement, this Cup has thus far seen them approaching a nadir, with two losses in their first two matches.

India, meanwhile, make a delayed entry thanks to a Supreme Court-mandated rule that players should not participate in any international fixture until after 15 days of the end of the IPL. The side will be keen to make an impact right away in a tournament when they are one of the favourites. Ranked second in ODIs, the Men in Blue have an outstanding record since the 2015 World Cup, winning 65.1% of their matches.

In cricket, as in any sport, the most fascinating contests occur when two world-class athletes face each other. With that in mind, you’re unlikely to see a better contest this summer than Virat Kohli going up against Kagiso Rabada.

In a recent interview with The Cricket Monthly, the South African fast bowler spoke about how he found the Indian skipper to be “very immature”, following a recent face-off in the Indian Premier League (IPL) – a comment that should spice up the contest even more.

Kohli has a splendid record against South Africa, averaging 66.8 which is seven more than his career average, with three centuries in his last six matches against the Proteas. In 50-over cricket, the Delhi-born batter has a good record against Rabada, scoring 145 runs and being dismissed by the South African pacer just twice in 11 innings – both of which came in 2015. 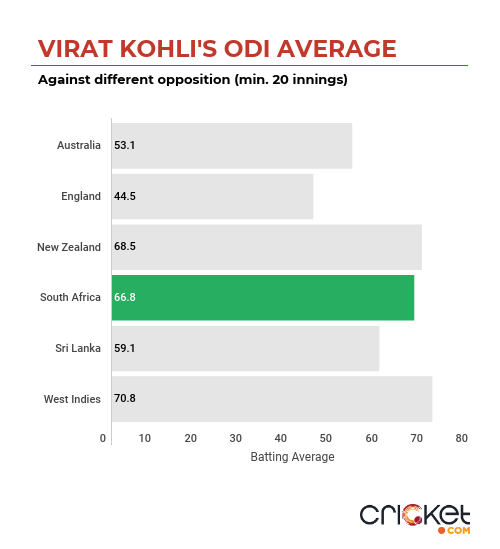 After failing to take a wicket in the shock loss against Bangladesh, the pressure on Rabada to live up to his reputation will only have increased, more so with Lungi Ngidi ruled out of the game and Dale Steyn out of the tournament due to injuries.

The 24-year-old averages 39.1 with the ball in England, his worst ODI record across all countries. While he has taken 1.6 wickets per innings in his career, in England that rate falls to 1.25.

The numbers might give Kohli the edge, but anyone who has seen what Rabada can do will not rule the pacer out.

Just like Rabada, India’s pace spearhead Jasprit Bumrah has found the going tough in England. He has just four wickets from five matches in these conditions, at an average of 52.5. There’s no other country where he averages more than 30. 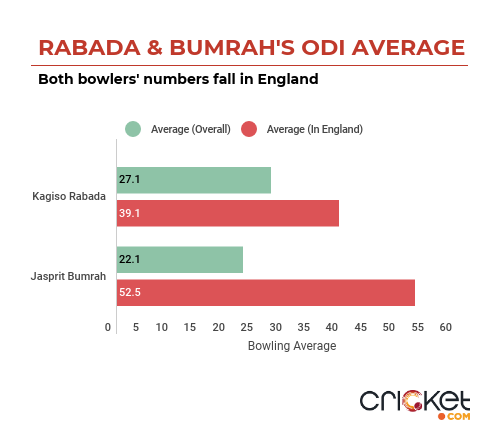 With the new ball, Bumrah will be up against Quinton de Kock, who started the World Cup with a half-century against England. The Indian pacer hasn’t dismissed his Mumbai Indians teammate in international cricket yet (49 deliveries) and the Protea wicket-keeper enjoys a majestic record against the Men In Blue.

De Kock has notched up five ODI centuries in 12 innings against the two-time world champions. His conversion rate from 50 to 100 in these matches is an astonishing 83.3%. India will need Bumrah to dismiss de Kock early, because if he is allowed to make a start, the Protea can be devastating..

Since the 2017 Champions Trophy, no team has taken more wickets with spin than India. In fact, no other side has taken even half of India’s tally of 200 wickets with slower bowlers in matches between the top 10 teams during the same period. 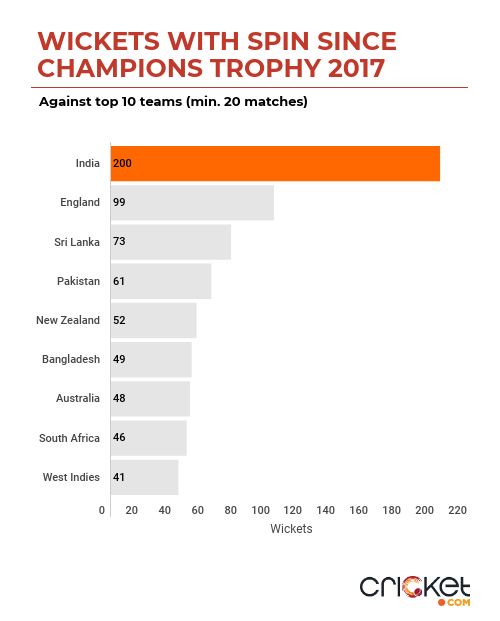 South Africa, especially, faced a tough time negating the spin duo of Kuldeep Yadav and Yuzvendra Chahal during the ODI series against India at home in 2018. Kuldeep and Chahal secured 17 and 16 wickets in six matches respectively, as India blew away the hosts 5-1.

There are encouraging signs for the South Africans though, with their top three – Hashim Amla, de Kock and Faf du Plessis – all averaging more against spin than against pace in their ODI careers. You’d think one of them, if not two, will have to bat deep if South Africa have to score big. 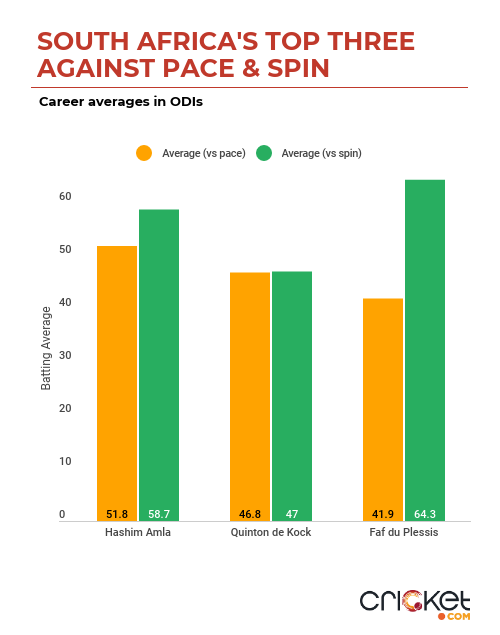 In an ODI between England and Pakistan at the Rose Bowl in May, 724 runs were scored – so expect batsmen to make merry on a wicket suited for tall scores. The forecast is of afternoon showers, which could encourage the captain winning the toss to bowl first.

Having slammed a century in the warm-up game against Bangladesh, it seems certain that KL Rahul will occupy the number four spot for India. Question marks remain over Kedar Jadhav’s fitness, with Vijay Shankar likely to come into the XI if the Maharashtra batsman misses out.

The Proteas have a few injury worries, with Ngidi ruled out of the game with a hamstring issue. Du Plessis will be hopeful that Amla, who missed the clash against Bangladesh, will be available for this match.