Umesh Yadav was the man-of-the-match in the last Test India played at home before the ongoing series against South Africa. He picked up 10 wickets against West Indies in Hyderabad in October 2018 setting up a 10-wicket victory for the home side. Since the start of 2018, no other Indian bowler has struck as frequently as Umesh in Indian conditions (a bowling strike rate of 24.8 balls per wicket).

Yet, the right-arm pacer from Nagpur was not included in India’s 15-man squad for the Test series against South Africa. He was recalled only as a replacement for the injured Jasprit Bumrah. Ignored for the first Test, Umesh snapped wickets in each of his first two overs of the second Test at Pune. He ended up with six wickets in the Test in only 21 overs.

Not picking Umesh initially may seem like a selection goof-up but in a broader light, it reflects the unprecedented strength attained in the fast bowling department by the Indian team that does not allow Umesh to break into the XI.

“We had not seen such a pace attack, nor did we think about it”,  said Kapil Dev, India’s leading wicket-taker in Test cricket amongst pacers, in appreciation of India’s current fast bowling attack.

The improving average of the fast bowlers in India tells why the former Indian captain thinks so highly of the current fast bowling attack. Kapil Dev used to play in an era when India’s bowling was largely about spinners. Even the attack before his time comprised of Bishan Singh Bedi, Erapalli Prasanna and Bhagwath Chandrashekhar playing together. The 2000s had Anil Kumble and Harbhajan Singh and the current side has the ‘Ravis’- Ashwin and Jadeja.

Sure, there were masterful pacers like Kapil Dev, Javagal Srinath and Zaheer Khan, but their careers saw minimal overlap to lend each other support to inflict a lasting effect in the game. Hence the pace bowling department always looked scanty.

Consequently, the spinners staged most of the victories for India at home. Between 2000 and 2017, Indian spinners took close to 70 percent of the wickets in the home games won by India. In the last two years, that number has come down to 61 percent without any exaggerated amount of help for the pace bowlers, the kind of which we see in South Africa and England. The Indian pacers, in fact, are better than the pacers of any other side at home since 2018.

For a 90s kid, it seemed like a far-fetched prospect that Indian pacers will attain such achievements in home conditions. The fact that they did it despite Jasprit Bumrah’s unavailability in home games, (Bumrah is only second to Pat Cummins in terms of bowling average amongst bowlers who have taken over 50 Test wickets since 2018) makes it even more remarkable. Both, Umesh and Mohammad Shami have better numbers in India than overseas.

As a result, the Indian attack has developed into one of the most complete bowling attacks in world cricket at present. Earlier, the touring batsmen used to wait for the opportunity to face the pacers to breathe a sigh of relief. Now, they can’t afford to be complacent once the spinners are off the attack. The pacers have contributed immensely to India’s indomitable run at home.

If Shami and Umesh are India’s go-to bowlers in home conditions, the onus shifts to Bumrah and Ishant Sharma overseas (with Shami not behind again). Making his Test debut at the start of India’s overseas cycle in 2018 - the Cape Town Test versus South Africa in January, Bumrah took to the red ball like a duck to water.

Ishant improved his line and length by starting to bowl fuller and closer to the off stump. As a result, after being the second slowest bowler to take 250 Test wickets in a 10-year career which had intermittent starring performances, Ishant enjoyed a splendid 2018 taking a wicket every 21.8 runs and 49 deliveries - both his best in a completed year of Test cricket.

The duo of Ishant and Bumrah complemented by Shami, who was the third-highest wicket-taker in 2018 with 47 scalps, led India to their most productive overseas cycle on the bowling front.

The trio collected 131 wickets while playing together in 2018 (136 overall), breaking the 34-year old record of most wickets by a pace troika in a calendar year earlier held by the intimidating Caribbean attack comprising of Joel Garner, Michael Holding and Malcolm Marshall (130) in 1984. Not to forget, this was the first year when these three played Test cricket together.  No wonder the Indian trio reminded Brian Lara of the same West Indian bowling attack of the 80s when Bumrah and Co. wrecked havoc on the West Indies batting line-up in 2019. 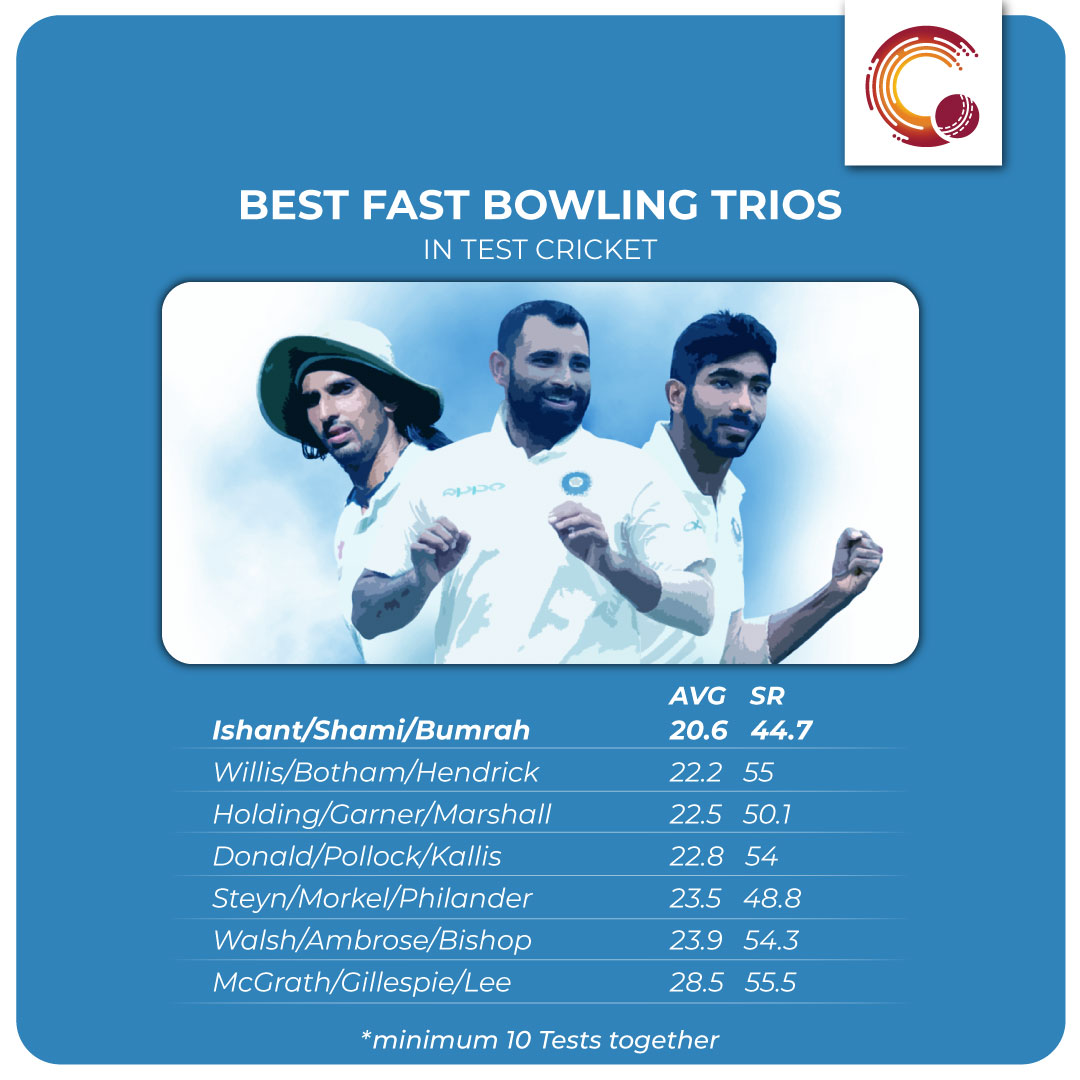 Even though Ishant, Shami and Bumrah have played only 10 Tests together, the least amongst the great attacks mentioned above, that too in times when the Test batting averages are approaching nadir, it is no mean feat to topple bowling trios like those. A lot of credit should also go to the Indian skipper, Virat Kohli, who has consistently emphasized the importance of pacers and brought a fast-bowling culture in the side to suit his aggressive style of captaincy.

As said above, with Ashwin and Jadeja in the team, India, for the first time, has an all-conditions bowling attack they can boast of after producing world-class batsmen. Another key aspect of the pace attack that points to a bright future is that the oldest member of the pace attack, Ishant Sharma has only just entered his 30s while Bumrah is only 25 years old. With bowlers like Navdeep Saini and Mohammad Siraj waiting for their chance in the longest format of the game, all the management needs to take care of is to keep the bowlers injury-free and ensure optimal exposure to the young crop.

*(all stats prior to the Ranchi Test) 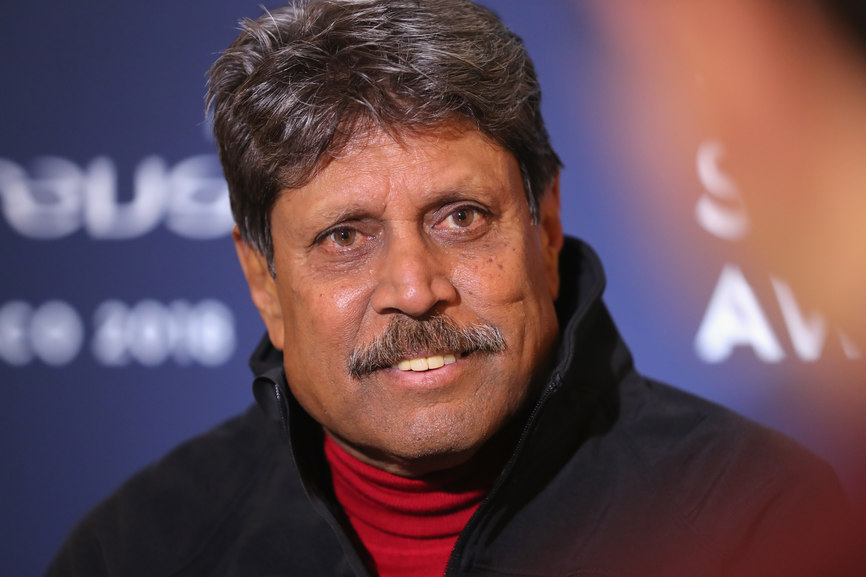 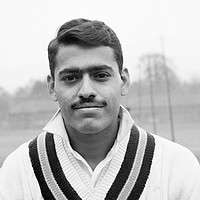 NEWS
Indian attack is fantastic but spinners tend to struggle in Australia: Ponting
Ponting said Australia have variation in their attack, which gives them an edge over other teams 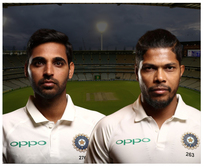