Inexperience led to mistakes on the field and decision making, admits Rohit

Inexperience led to mistakes on the field and decision making, admits Rohit

Mushfiqur Rahim guided Bangladesh to their first ever T20 victory against India with an unbeaten 60 where a butter-fingered Krunal Pandya and an indecisive Rishabh Pant let the team down despite a par-score on a tricky Feroz Shah Kotla surface.

“It was a defendable score, and we made mistakes on the field. The guys are a bit inexperienced, and they can learn from that, perhaps not make them the next time. The reviews (DRS) were a mistake from our side,” Rohit admitted during the post-match presentation ceremony.

However Rohit gave credit to Bangladesh for winning it in a convincing manner.

“Not to take credit away from Bangladesh. They put us under pressure right from the start when we were batting.”

Rohit then explained the DRS calls -- (one off Yuzvendra Chahal’s bowling), which he didn’t take on Pant’s insistence. The TV replays later showed that Mushfiqur would have been out. The second one which they took was a caught behind off Soumya Sarkar, when there was no edge and India lost a DRS.

“The first ball he (Mushfiqur) played on the back-foot, we thought it was going down leg, and the next one on the front-foot. But we forgot how short he is. We weren’t up to the mark on the field, but batting-wise I think we put up a competitive score,” the skipper assessed.

Yuzvendra Chahal (1/24 in 4 overs) is back in T20s and skipper feels that the Haryana leg-spinner is an asset in this format.

“Chahal was always welcomed into this format. He’s crucial to this team, and he showed how important he is in the middle overs, when the batsmen are set. He completely understands what he needs to execute, and that makes it a little easier for the captain as well.”

Man of the match Mushfiqur said that his aim was to take the game deep and get one good 16-20 run over off one of the two pacers.

“Soumya (Sarkar) and I had a chat, and we thought of dragging the game deep, and any of the quicks could have been targetted for 15-20 in an over because the spinners got a lot of assistance so it was hard to hit them. Naim also played really well to start with.”

T20 is not one of Mushfiqur’s preferred formats but he feels that he is slowly getting better at it.

“I’m trying my best to evolve as a cricketer, and I will try to perform in each and every game for Bangladesh.”

For skipper Mahmudullah Riyad, captaincy became easier as his men were able to execute what he expected out of them.

“I think it was all based on how we started. The bowlers did a great job, everyone chipped in. I think we fielded really well and that gave us momentum going into our batting. I think captaincy is made easy because of the boys who have performed really well.”

Too soon to pass judgement whether Pant can take DRS calls: Rohit

The Indian team paid the price for Pant’s poor DRS calls against Bangladesh and Rohit says that he doesn’t want to jump to a conclusion yet whether the youngster is good enough to take tricky review decisions.

India did not review the decision when the umpire turned down an lbw appeal against Rahim in the third ball of the 10th over, bowled by leg-spinner Chahal.

Rahim was on six at that time and went on to make an unbeaten 60 to lead Bangladesh to a comfortable seven-wicket win, while chasing 149.

“Of course, Rishabh is young and he will need time to understand. It’s too soon to judge whether he can make those decisions. Plus, the bowlers as well. It’s a combination when the captain is not in the right position to make that decision,” Rohit said at the post-match conference.

In the last ball of that Chahal’s over, when the umpire turned down a caught behind appeal against Soumya Sarkar, Rohit reviewed the decision on Pant’s insistence but lost it since there was no edge.

“When you are not in the right position (as a fielder), you have to trust your bowler and the wicketkeeper. Based on that, you have to make that decision, whichever format you play.”

Rohit felt that 148 was a defendable score had they been smart on the field.

“148 was a good score. We would have defended it if we were smart on the field. A couple of decisions we did not get it right on the field and that went against us. That’s where we lacked in decision making,” he said.

Sent in to bat, India lost Rohit in the very first over and the skipper his early dismissal combined with a tough pitch negotiate made life tough for them.

“Whenever you lose a wicket in the first over, it’s not easy to build on that. The pitch was slightly soft, so shot-making was not that easy. We wanted something around 140-150, on batting first, that was the message.”

Rohit said he was not overtly worried about that fact that his brigade failed in home conditions but lauded Bangladesh for raising crucial partnerships.

“The ball was stopping and gripping a little bit. These are young players trying to get into the squad, so they need a bit of time to understand how they need to bat on such pitches. I would not call that over-cautious approach. I think we were smart but we did not get enough runs.

“It was good fighting total but when you defend such total, you need to keep taking wickets but they had good partnerships and that was the turning point.”

Asked if how difficult it was to operate without proven performers such as Mohammed Shami and Jasprit Bumrah, the captain backed his young bowlers.

He expects them to learn from their mistakes.

“They still need to understand when defending smaller targets, they need to bowl according to the plan. They will learn by playing these games. They have the talent and ability to bounce back but only time will tell if they can do that or not.”

He also said that, asking Khaleel to bowl the penultimate bowler was the best option he had.

“I did not want our spinners to bowl at the back-end. I kept one over for Chahal because he has bowled in that situation before. Two right-handers, I will take that chance anytime with Chahal taking the ball away from them. So that was the idea behind keeping Khaleel for the back-end.” 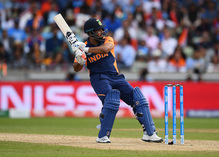