The Afghanistan skipper bemoaned the fact that his batsmen did not go on to play decisive innings against India.

Afghanistan captain Gulbadin Naib said his inexperienced team were learning “day by day” despite the pain of losing to India when in sight of a famous World Cup win on Saturday. The unfancied Afghans, playing in just their second World Cup, restricted Virat Kohli’s title contenders to 224 for eight in 50 overs in Southampton and were always in with a chance of an upset. But a Mohammed Shami hat-trick finally ended their resistance and condemned them to an 11-run defeat -- a sixth straight loss at the tournament in England and Wales. “At the start of the tournament, when we played the first four games, we lost really badly, and also we played against England and now India as strong sides and the other favourites of the tournament,” Naib told reporters.

“So I think we’re now getting better and better day by day. This is the team I wanted actually. Also in the batting side. So this is a good sign.

“These kinds of teams don’t give you a single chance and also credit goes to the Indian side, how they bowl, how they field. We did a lot of things good, but in the end we missed it.”

Naib, who was only made captain of the one-day side in April, bemoaned the fact that his batsmen did not go on to play decisive innings. “When we chase this kind of total, like 220, 250, the middle order should go to 50 or 80. Thirty, 20 runs is not enough,” he said.

But he said despite the agony of defeat, Afghanistan would take a lot of positives from their performance against unbeaten opponents captained by his favourite player. A win would have been just the second in their history at World Cups after they notched a single victory, against Scotland, at the 2015 edition. “When you’re playing this kind of team, you learn a lot of things,” he said.

“We learn it with your mistakes. Yeah, the score is chaseable, but I think we didn’t take our responsibilities, especially on the batting side.

“We are sad because we had a chance to beat this kind of team. In the World Cup, it’s a big achievement for any team. But the big teams, they didn’t give a single chance.

“My favourite is also Virat Kohli, and I played against him. So today I missed the opportunity to beat them. But India is one of the best teams now.” 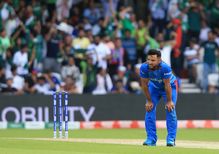