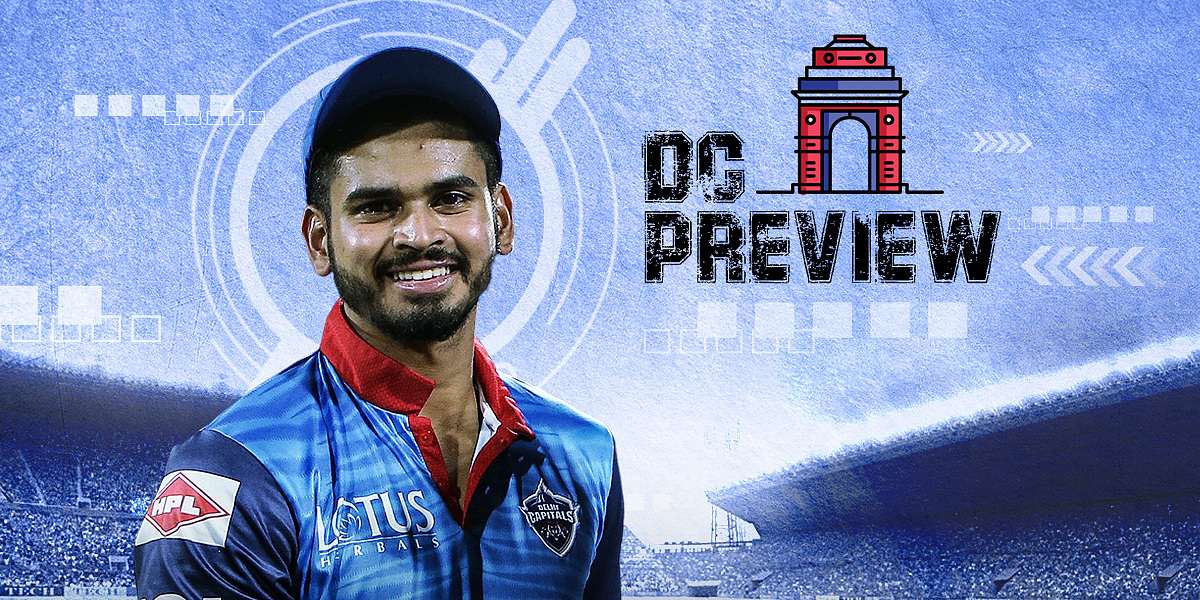 Team Preview - While Delhi have quality spinners and top-order batsmen, there is a dearth of proven finishers.

The Delhi Capitals had the first shot at Virat Kohli, David Warner, AB De Villiers and Andre Russell. If Delhi had the foresight of the potential of these players, they would have been a part of their franchise now and in the future as well.

Delhi started the IPL well in the first couple of years with a good mix of Indian and overseas players. What transpired later was another impatient management failing to build a solid core and a leadership group. Delhi have had 11 captains in the twelve seasons so far. The impatience started to creep in the performance. From all the active IPL teams, no other team has a lower win percentage in IPL’s history than Delhi’s 44%.

Around 2016, when Rahul Dravid took over the role of the mentor, there was a push to snap young Indian players from the Under-19 circuit. This did not yield immediate returns as Delhi finished sixth or below for three seasons post that. However, now when Shreyas Iyer, Rishabh Pant and Prithvi Shaw are established players, they have solid Indian core which can serve them for years to come. The process produced results in the 2019 season when they finished third. Come the 2020 season, they enter the tournament as one of the stronger units.

When we delve into statistics, there is nothing particular about the performance of DC with bat or ball since 2018 that stands out relative to other teams. On most parameters, they are somewhere in the middle, among the top-four on most occasions. Thus, their performance in 2019 helped them qualify to the playoffs comfortably but they were not good enough to beat the stronger teams after that.

The only aspect where they are better than other teams is the ability of their bowlers to take wickets. Since 2018, no other team has a better balls per wicket record than DC’s 18.29. 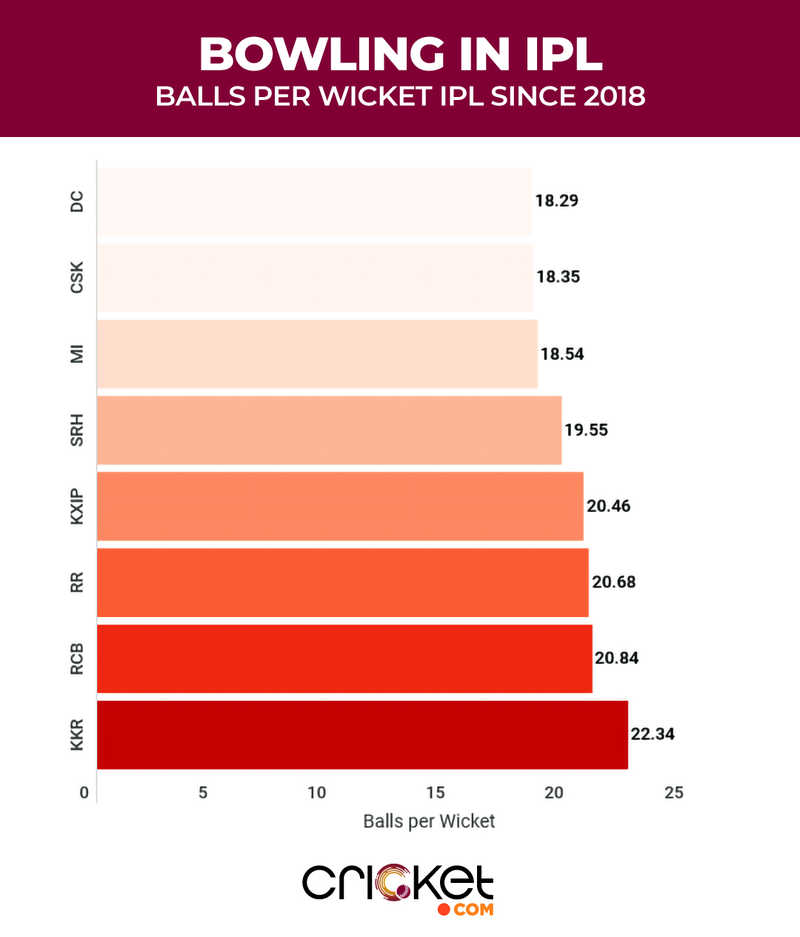 However, in T20 keeping the runs down hold higher importance than picking wickets. On that aspect, despite being the best when it comes to taking wickets, they are number four in terms of economy rate at 8.53.

Contributing to the wickets tally was Kagiso Rabada. Playing in the 2019 season, he took 25 wickets in 12 matches at a strike-rate of 11.28 balls per wicket, better than all bowlers with more than 11 overs.

On being economical, they have done well while bowling in the death overs. Their economy-rate of 9.58 in overs 16-20 since 2018 is better than all teams except SRH. 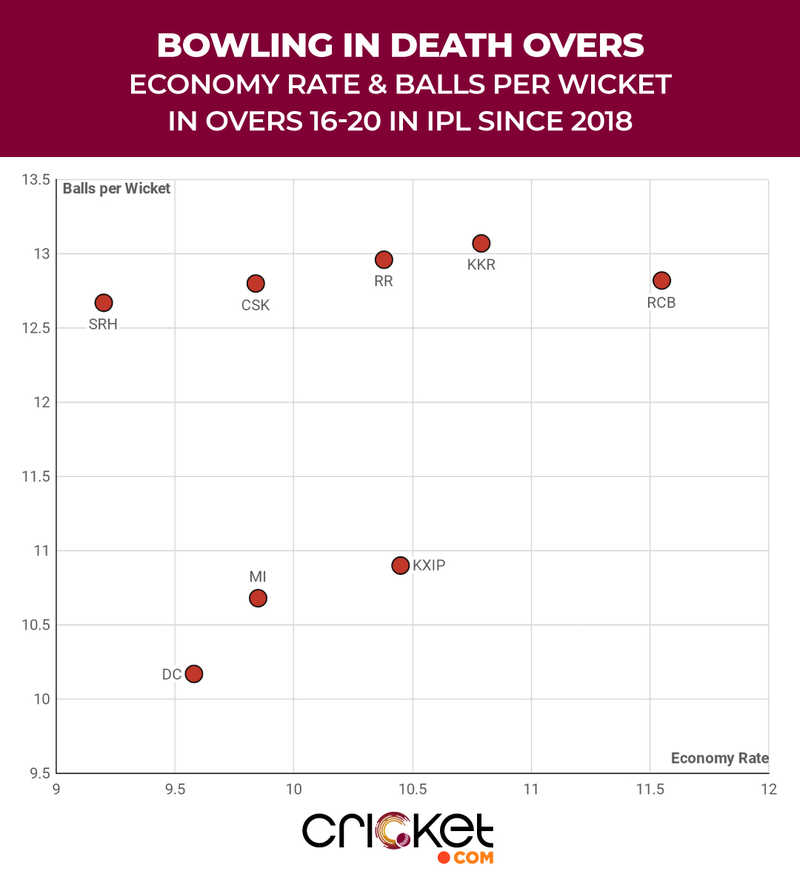 Contributing again, it was Rabada who boosted their economy in death overs through his returns of 8.7 runs per over in 2019. Others like Keemo Paul, Axar Patel, Ishant Sharma and Amit Mishra chipped with an economy of under 10 at the death. But their workload was lower with total overs in single digits in this phase since 2018.

Though their batting line-up looks good on paper, it has not been exceptional as a unit. The only phase where their performance is decent is the death-overs. Their run-rate in overs 16-20 has been 10.53, fourth-highest since 2018.

This is largely due to the efforts of Rishabh Pant. In this period, he has batted with a strike-rate of 240.25 in overs 16-20. This is second best after De Villiers’ 254.43 among players with runs in three digits in this phase.

Moreover, in these overs, they lost a wicket every 24.92 balls, better than only RCB (23.26). Hence, not only have they scored at a slow pace but have also not managed to keep wickets in hand for the death overs. 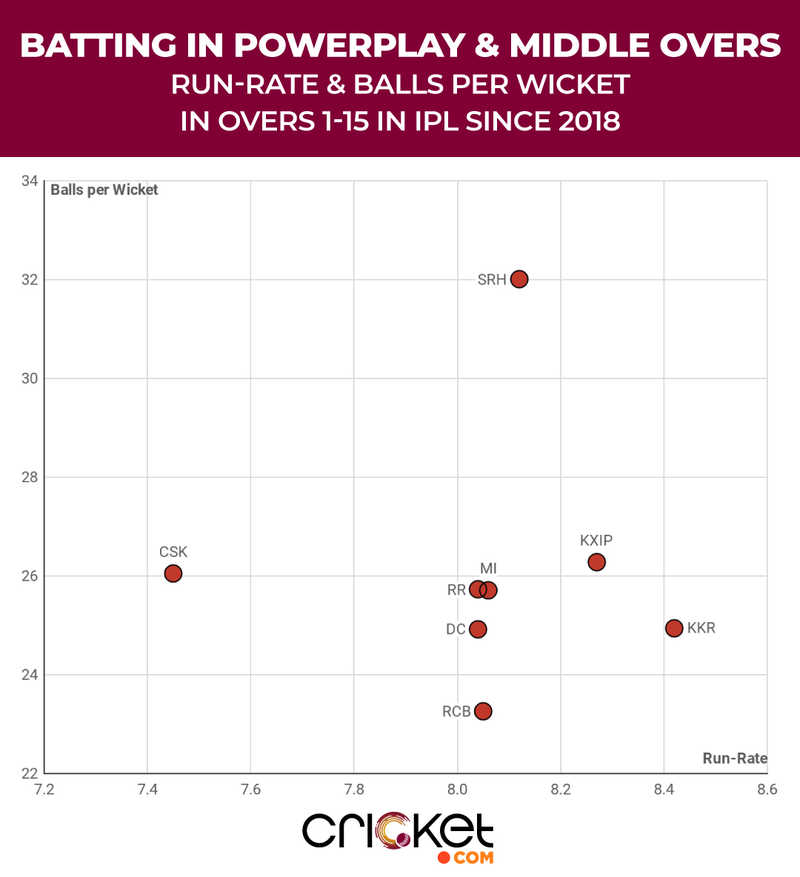 Breaking it down, their run-rate in both powerplay (overs 1-6) and middle-overs (7-15), is better than three teams at best. Neither of their openers, Dhawan and Shaw are explosive players. Both have a strike-rate of around 140 in the powerplay in the first six overs since 2018. Though Shaw was fearless in 2018 and batted with a strike-rate of above 150, he was a lot more subdued in 2019. Iyer, who batted at three, has an even lower strike-rate of 121.42 in the first six overs.

In the middle-overs, their run-rate is low despite their top-scorer in this phase, Pant, having a strike-rate of 149.44 in overs 7-15 since 2018. Iyer’s cautious approach in this phase with a strike rate of 120 brought down the overall scoring rate. Moreover, players like Colin Ingram and Glenn Maxwell turned out to be futile investments for the middle-overs in the last two years. Both are not part of the franchise anymore. 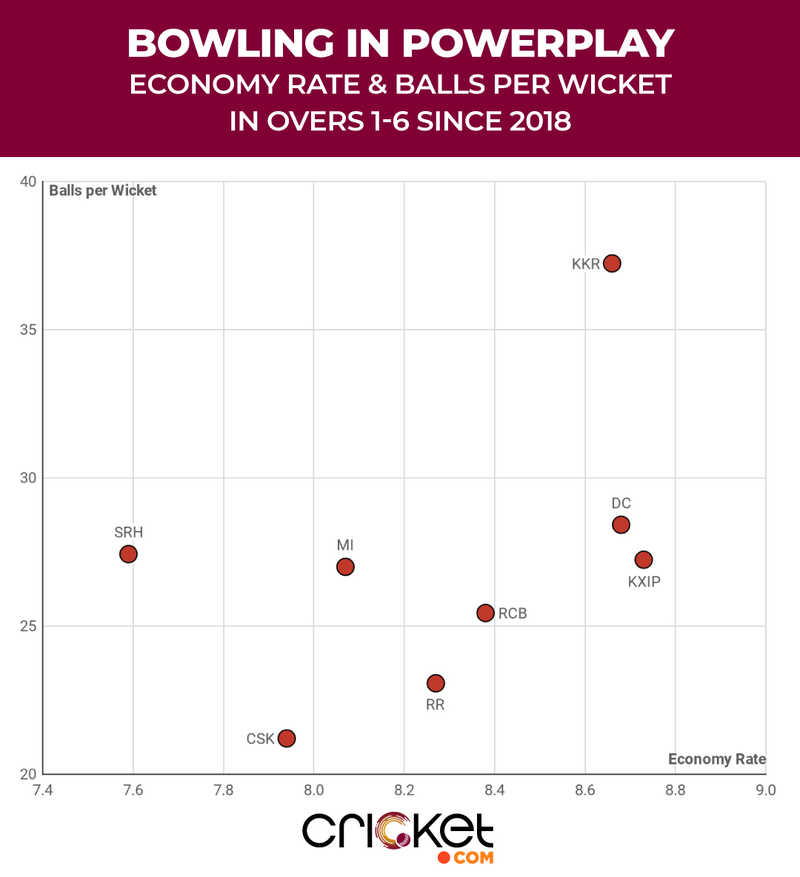 However, since the inclusion of Rabada and Ishant in 2019 these numbers have improved. In the 2019 season, their economy-rate in the powerplay was the second-best. This time though, the anchor was Ishant who bowled with an impressive economy of 6.9 in the first six overs.

DC had a strong bowling unit in 2019 with options for both spin and pace. Adding Ravichandran Ashwin ahead of this season makes their spin department cover all aspects and richer on experience. As the tournament moved to UAE, Ashwin will be far more valuable on helpful decks.

Shimron Hetmyer is another good addition to the side. An aggressive six-hitting machine with a liking to spin bowling will make a threatening pair with Pant.

However, apart from these two, it is tough to get our head around the selection of other players. Ahead of the season, DC traded Ajinkya Rahane from RR. An opener who is more defensive than their incumbent pair. Moreover, in the auction, they bought Jason Roy, Marcus Stoinis and Alex Carey. All of whom have been successful as openers in T20s for their franchises with the first two exposed against spin bowling in recent times.

Lacking a quality all-rounder was a known weakness for DC. They do have the Patels - Axar and Harshal – as options but neither of them is a Stokes or a Jadeja. Going into the auction with this knowledge they ended up buying a herd of openers.

The all-rounder that they did buy in the auction was Chris Woakes who is making a name for himself with bat and ball in Test cricket, and yet to light the stage in T20 cricket. But, he ruled himself out ahead of this season.

Woakes’ countrymen, Roy, also made himself unavailable weeks before the tournament. The choice of their replacements was, for lack of a more suited word, interesting. Anrich Nortje made way for Woakes whereas Daniel Sams replaced Roy. Neither of them claims to be learning to bat at the international level. Nortje is a replacement for Rabada at best, in case of his injury. While Sams can find a place in the XI based on his variations and recent exploits in the Big Bash League.

As for the all-rounder, the management might push the case for Stoinis. However, he is neither a guaranteed four-over bowler nor a proven finisher. As none of their top-five batsmen have the capability to roll their arm, they will have to do with a longish tail to have six bowling options in a match.

Going into this season, their strength remains their bowling and the top-five batsmen. In their top-order, if Iyer plays the role of the anchor and remains cautious, one of their openers will have to take calculated risks to make the powerplay count. This is more important in places like the UAE as pitches will get tougher to bat on with matches played on same venues.

DC have the ingredients to repeat their performance from 2019. As for going all the way, the gaps can hurt them in big matches. 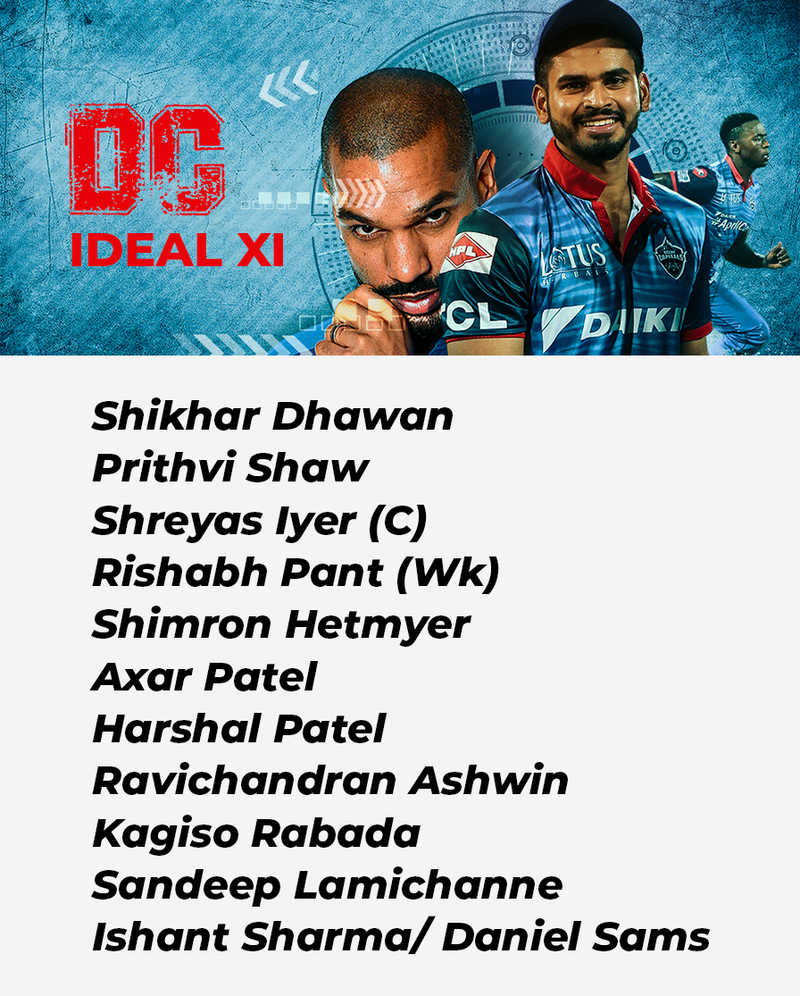