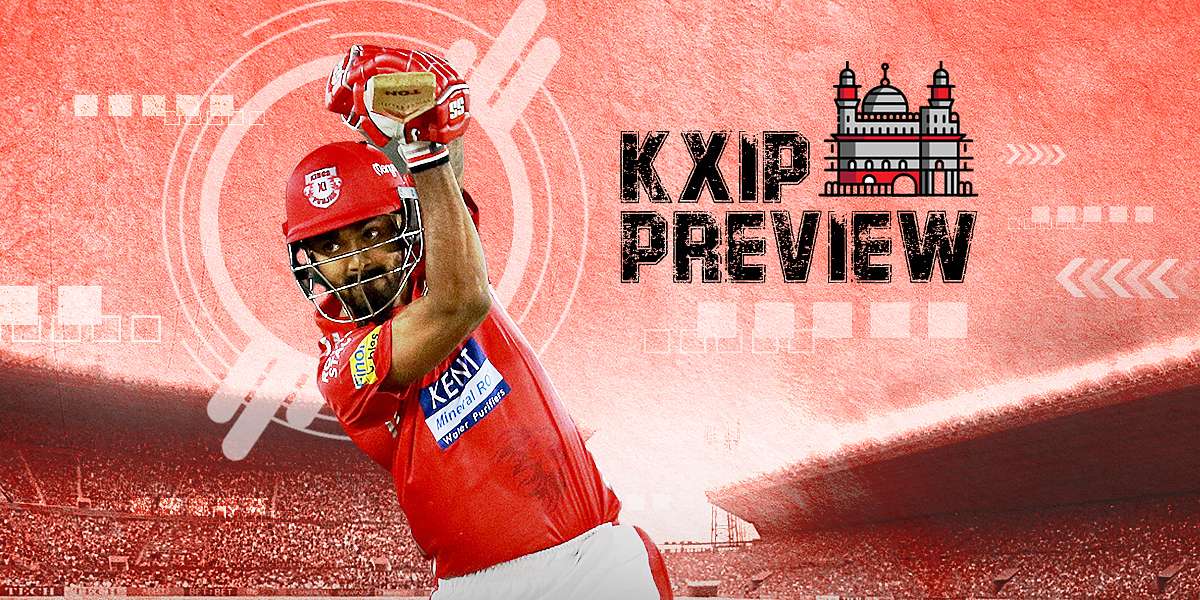 Somesh Agarwal
Will the new leadership group end KXIP’s impatience?
Team Preview – Strengthening the top-order with Gayle or supporting the middle-order with Maxwell is the question number one for KXIP.

A stable management group is a hallmark of any successful enterprise. In the context of sports, the most celebrated managers in football have spent years if not decades with one team. In cricket, a single captain has led the most successful teams that have dominated in their generation.

In the 13th season of the IPL, Kings XI Punjab will be playing under their twelfth captain and ninth head coach. In comparison, CSK have had two coaches and two captains in all these years and it is no wonder that they have made it to the top-4 in all seasons they were a part of. Whereas, KXIP have done so in two of the 12 seasons, the least among all active IPL franchises.

There is a consensus that Ravichandran Ashwin is a shrewd cricket thinker. His eccentric leadership tactics helped them with a good start in both the seasons since 2018. They won five and four out of the first six games in both seasons respectively. However, things went downhill and they ended up with only six wins in each of the last two seasons.

Leading them once again is an inexperienced captain in KL Rahul. However, to guide him through the tournament is Anil Kumble. Having mentored MI twice to the title in 2013 and 2015, Kumble is the head coach for an IPL franchise for the first time. Together, they set out to ensure that KXIP compete and do not continue to be a pushover.

Not much has gone right for a side that finished sixth in each of the last two seasons. However, at a cursory glance, it is a fair assessment that the stronger suit for KXIP is their batting. Their overall run-rate of 8.61 is the third-best among all teams since 2018.

This perceived strength is because of their performance in the middle-overs (7-15). With 8.23 runs per over in this phase, their pace of scoring is the second-best after KKR (8.31). 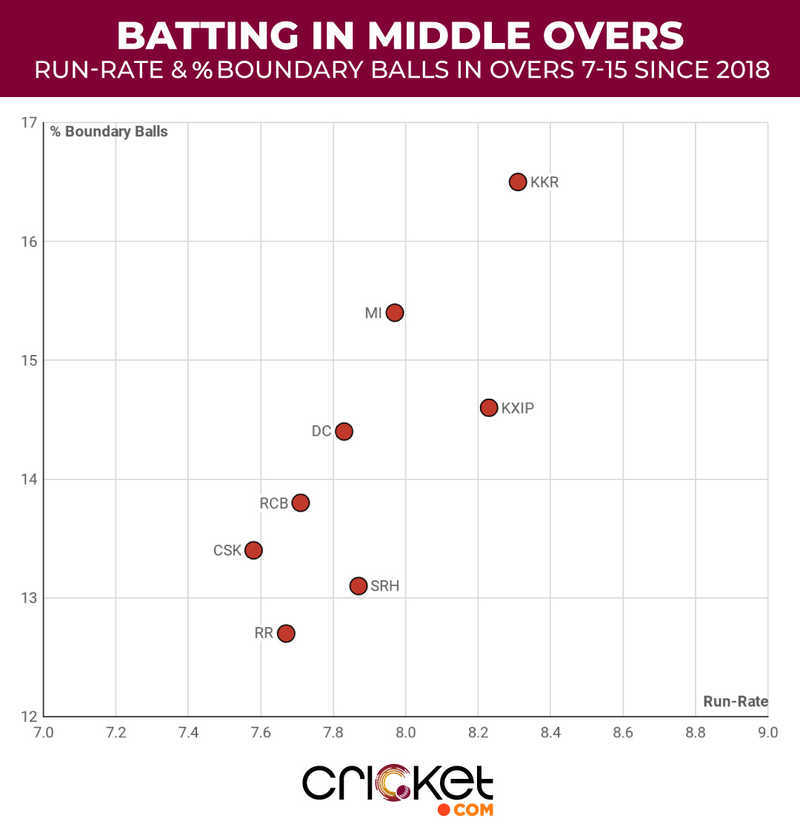 Surprisingly, the chief contributors to this success are Chris Gayle and KL Rahul, their designated openers. A conundrum that KXIP face is that both their openers are slow starters. Since 2018, neither of them have a strike-rate above 140 within the first four overs of the innings. Once they set in, Gayle, in particular, accelerates and has a strike-rate of 156.4 in the middle-overs. Rahul contributes with a healthy rate of 134.2.

In 2019, Mayank Agarwal, improved after international success, scored 231 runs at an exceptional strike-rate of 158.2 in this phase. The trio has been the crux of KXIP batting line-up. There has not been much to cherish outside them.

Batting in Powerplay and Death Overs

For the batsmen in T20s, the two most crucial phases of an innings are the powerplay (1-6) and death overs (16-20). Each requires an attacking approach to score at a brisk pace.

What looks like a strong batting unit on paper has struggled with the bat in both these phases. Individually, their run-rate in these two phases is higher than only two other teams. 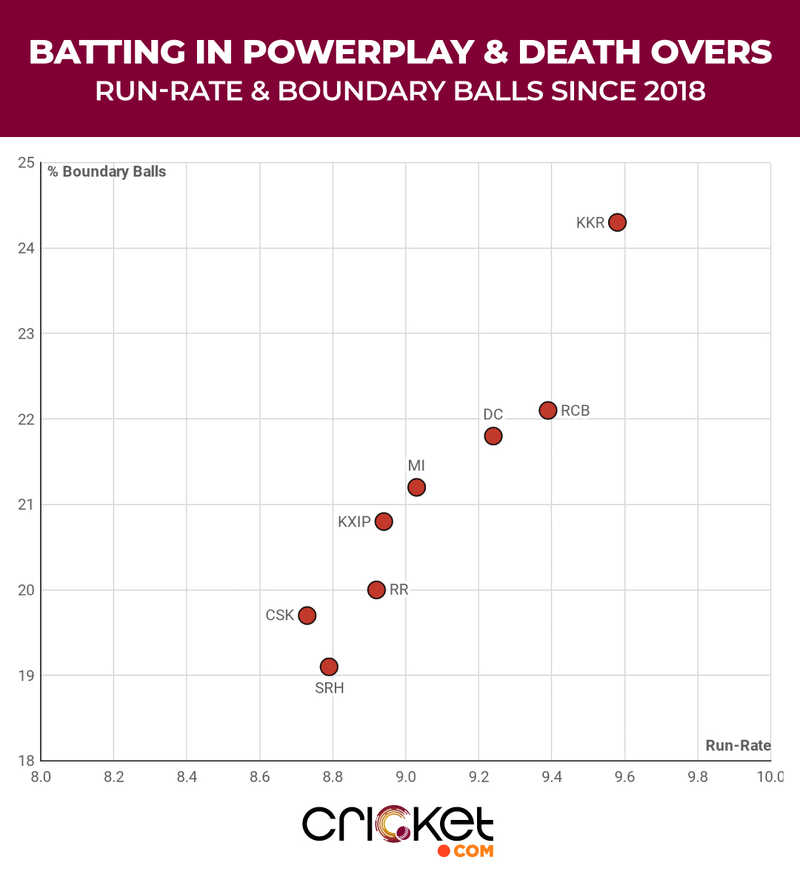 Rahul and Gayle are dangerous T20 batsmen but their similar approach to batting hurts their team at the start of the innings. Gayle has historically been a slow starter. However, in 2019, even Rahul adopted the same methodology where his strike-rate in the first 10 balls was only 96.8.

His approach in the last season can be due to two reasons. A dent in confidence after an ousting from the Indian side across formats due to multiple reasons. Or, a cautious approach to be more responsible and stay till the end due to lack of quality finishers. Even in death overs, the face-saver for KXIP has been Rahul who averages 61 in this phase since 2018 at a strike-rate of 196.8.

The fact that the next-best scorer for them in death overs since 2018 was Ashwin highlights the absolute dearth of any quality finisher in the side.

As stated earlier, bowling has been the weaker suit for KXIP. An overall economy of 8.91 since 2018 is better than only one team: KKR. Digging a little deeper, the issues are more profound across two parameters: economy in the powerplay and lack of wickets in middle-overs.

Since 2018, their economy rate of 8.73 in the powerplay is the worst among all teams. 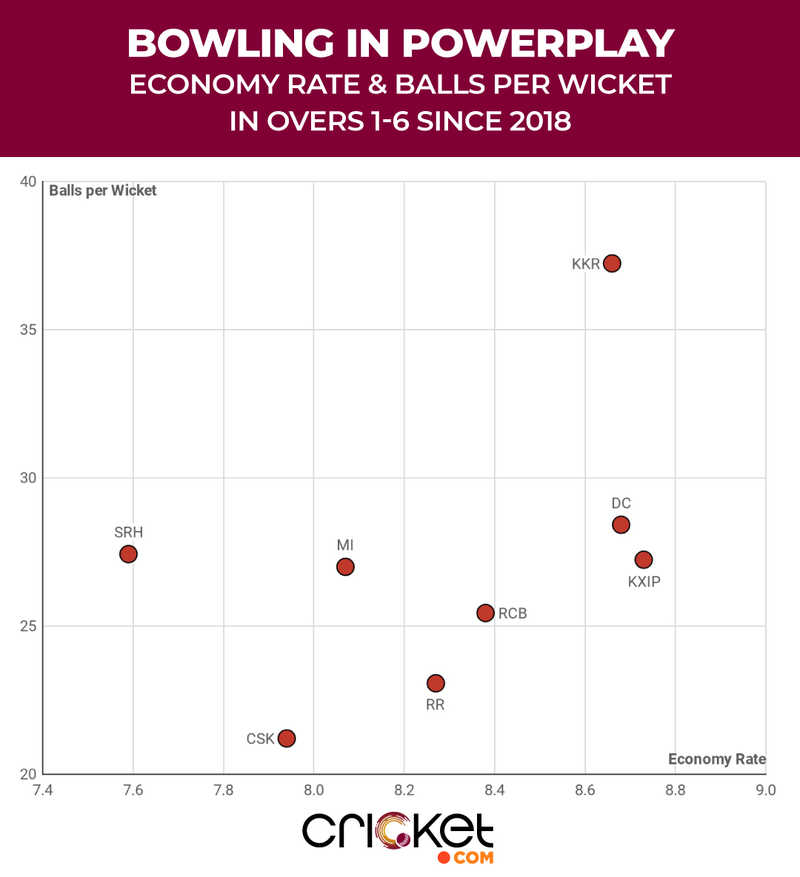 In Mujeeb Ur Rahman, they have a seasoned powerplay bowler in their mix. However, he suffered a dip in form in 2019 when his powerplay economy drops from 5.6 in 2018 to 9.4 in 2019. The availability of Mohammed Shami helped the side in 2019 who bowled with a decent economy of 7.6 in the powerplay.

Outside these two, there is no one else to talk about in any of the phases. As a result, the other bowlers like Andrew Tye, Ankit Rajpoot, Sam Curran and Ashwin himself suffered an ousting ahead of this season. 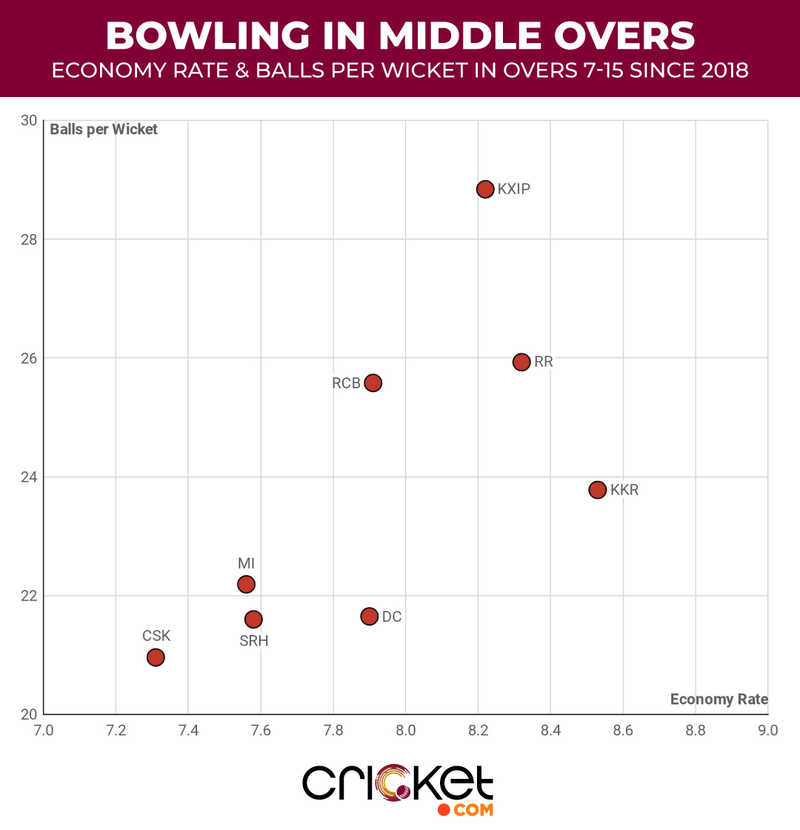 Ashwin was the leading wicket-taker for them in this phase. But, he averaged 29.6 balls per wicket. Hence, even if he was bowling three overs per match in this period, he averaged around two wickets in three matches. The next best bowler has half the wickets than Ashwin, highlighting a serious gap.

Lack of wickets in the middle-overs results in expensive death-overs. Here their economy of 10.45 was better than two other teams but still not noteworthy.

Apart from the top-order trio, the two names to look forward to in this season are Nicholas Pooran and Glenn Maxwell. With a strike-rate of 157 in six innings 2019, Pooran provided a glimpse of what he is capable of. Since then, his ball-striking prowess has followed an upward trajectory.

It is a long time ago but when UAE hosted the first leg of the IPL in 2014, no other batsmen created a bigger impact than Glenn Maxwell. In five innings, he had three scores of around 90 and ended with a strike-rate above 200. In this season, these two can fill the void for KXIP in the lower middle-order.

However, with Gayle at the top of the order and the need for foreign bowlers, it is unlikely that both will get a start right away. Later on, depending on Gayle’s form, Mayank can move to the top with both Maxwell and Pooran playing the role of the finisher.

On pace bowling, Sheldon Cottrell and Chris Jordan are the latest additions. Cottrell can be effective with handy swing with the new ball, though he tends to be expensive. Jordan with his variations is more adept to bowl in any phase of the innings.

Two exciting young prospects this season are the pacer Ishan Porel and leg-spinner Ravi Bishnoi. Porel has been earning praise left, right and centre after an impressive Ranji Trophy season. Bishnoi was the leading wicket-taker in the latest Under-19 World Cup. The thought of him coached under Kumble is exciting and his success can solve the middle-over issues for KXIP.

The two unsolved problems that may hurt KXIP are a lack of notable Indian T20 batsmen in the middle-order. Here Sarfaraz Khan, Mandeep Singh, Karun Nair and Deepak Hooda will have to put their hands up.

The other is the absence of a genuine all-rounder – Indian or foreign. The names in contention for the role are Maxwell, James Neesham and Krishnappa Gowtham, none of them is a guaranteed – 4 overs with the ball - material.

Overall, the performance of the players with a high billing-rate can overshadow the obvious weak spots. After regaining his stature in India’s white-ball side, a confident Rahul will have to anchor KXIP once again. Together with Kumble, it is upon him to ensure that the results this year warrant a stable leadership group for the next few years. 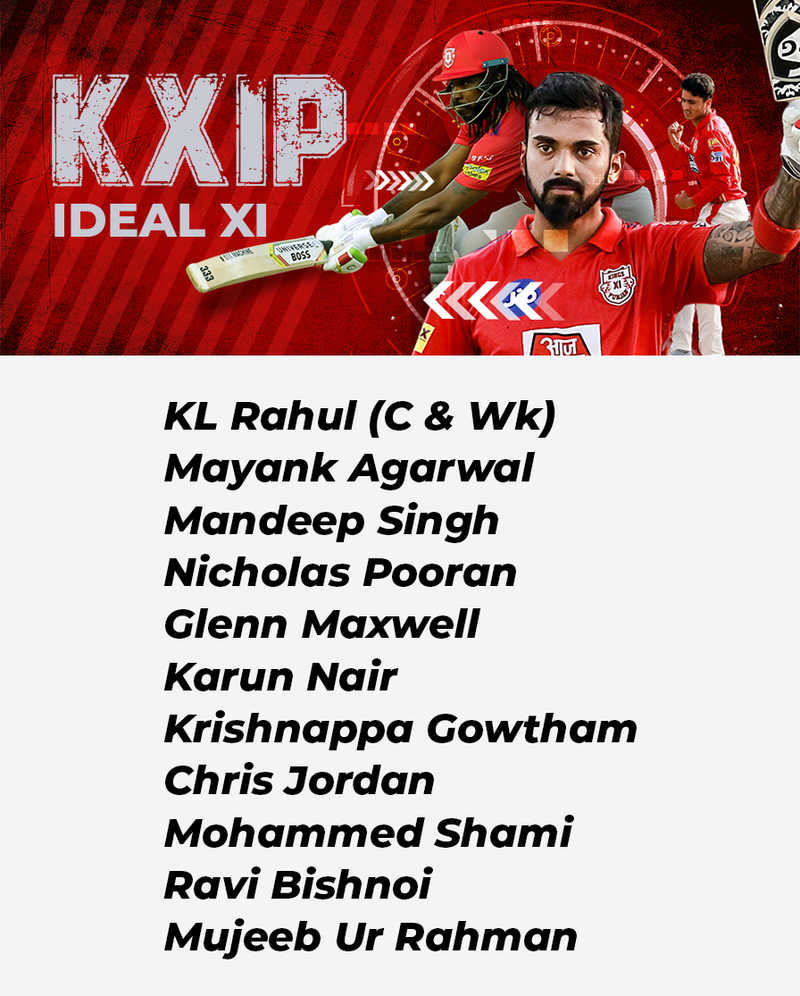