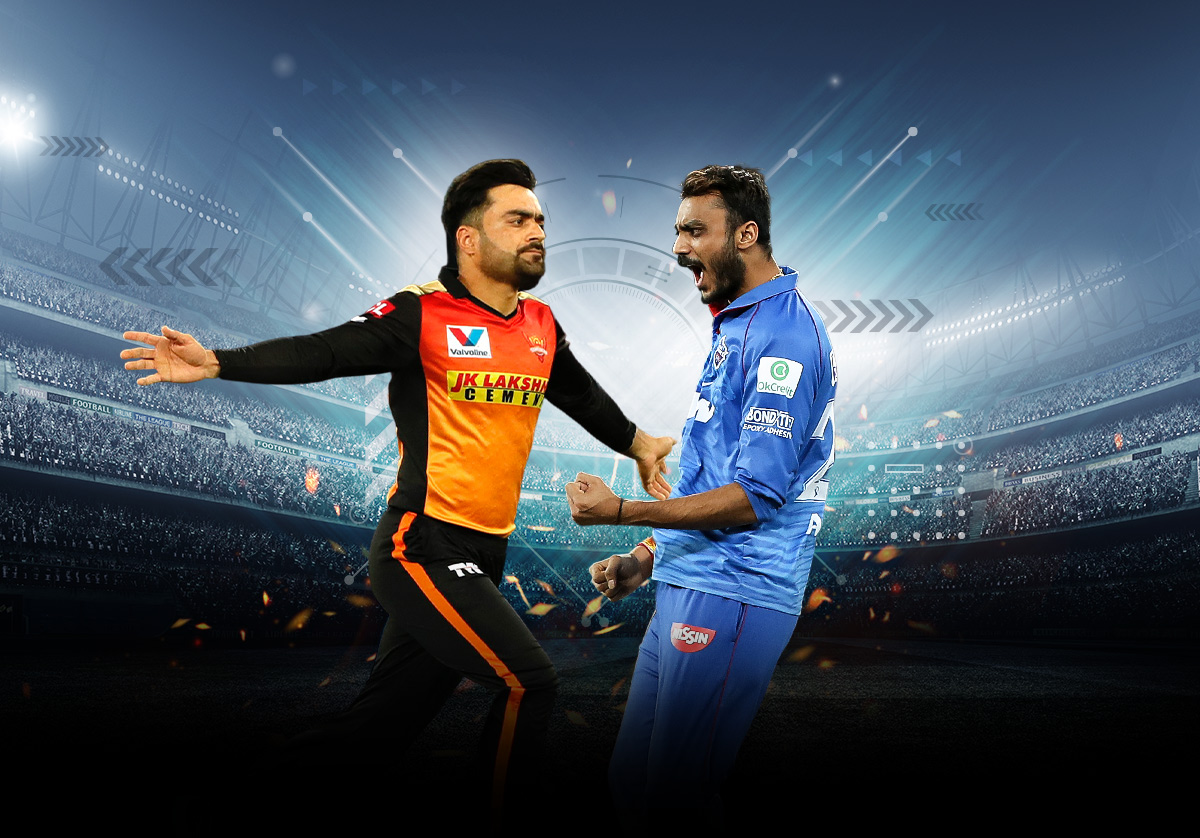 Kartik Kannan
IPL 2020: League Stage - Which Spinner has created the most Impact?
This article asks the fundamental question: which spinner has made a greater impact this IPL? Have the Indian spinners done well or have the international ones fared better?

The Purple Cap is a fine metric. It measures a bowler with the maximum number of wickets in an edition of the IPL. It does not however measure the value of the impact generated to a side’s chances in the IPL. How do you do that?

Criclytics has a match rating index for each match, which measures the impact the individual had in that match relative to others. What it also measures as an input is a layer added in which it talks about the win% impact a player had for each ball bowled in the IPL. We have tried isolating just the win% impact for each player in each match to understand how their spells have contributed to winning the match.

Spin to win it?

Before we get into the details, it’s important to know the optics of the raw data split between pacers and spinners in IPL 2020. Pacers have been able to get more wickets and at a much quicker strike rate too. 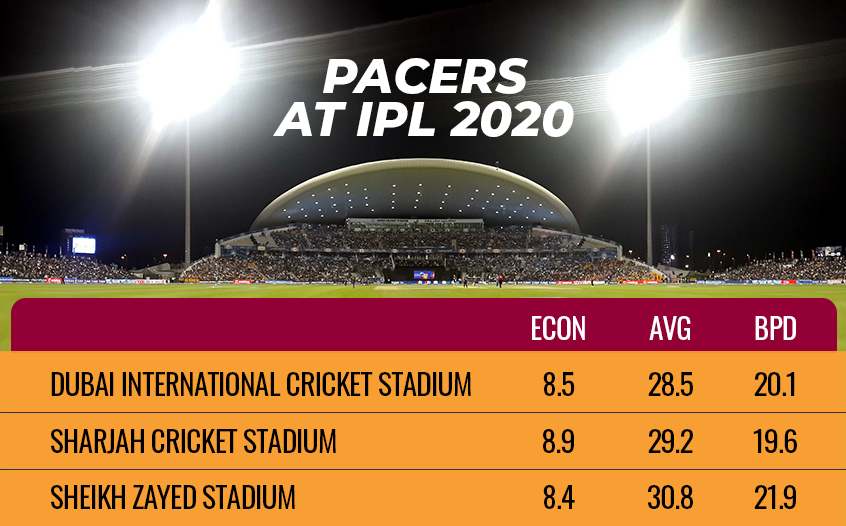 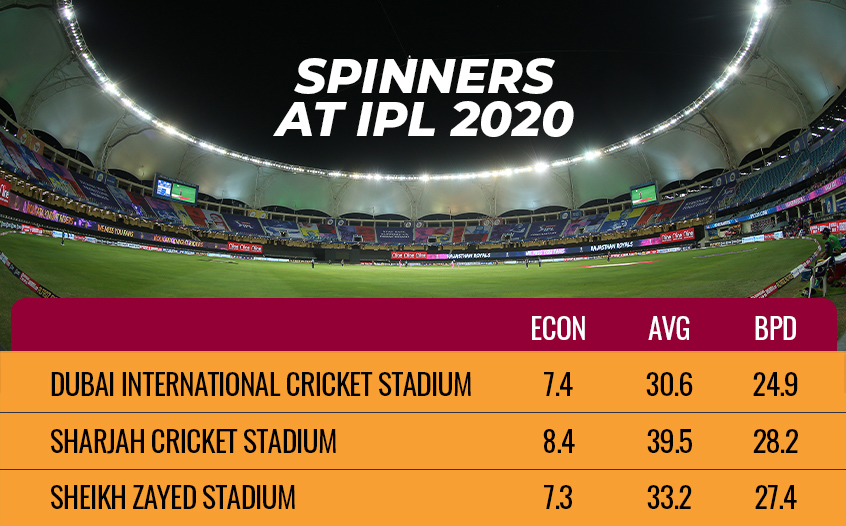 But while these stats are there, who’s had a higher impact is a question many fans would have. Here is a rough split of the impact by bowler types in IPL 2020. 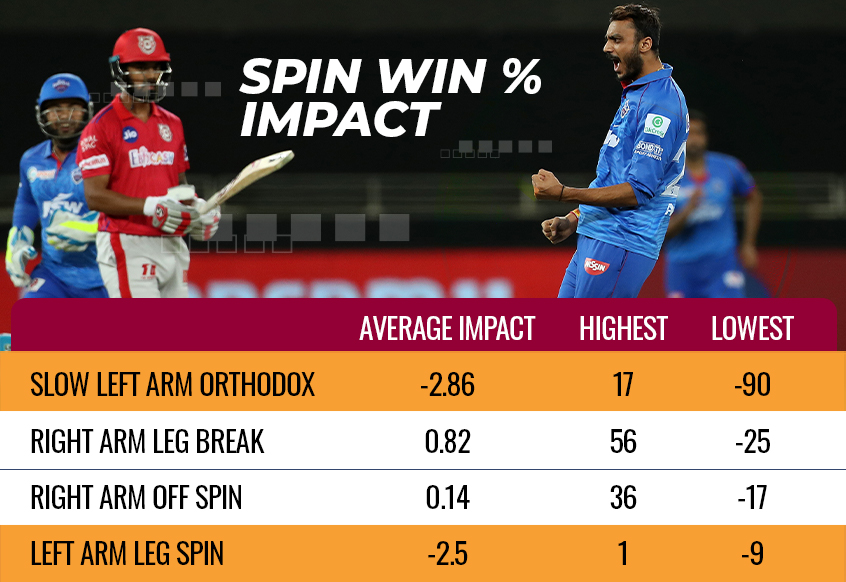 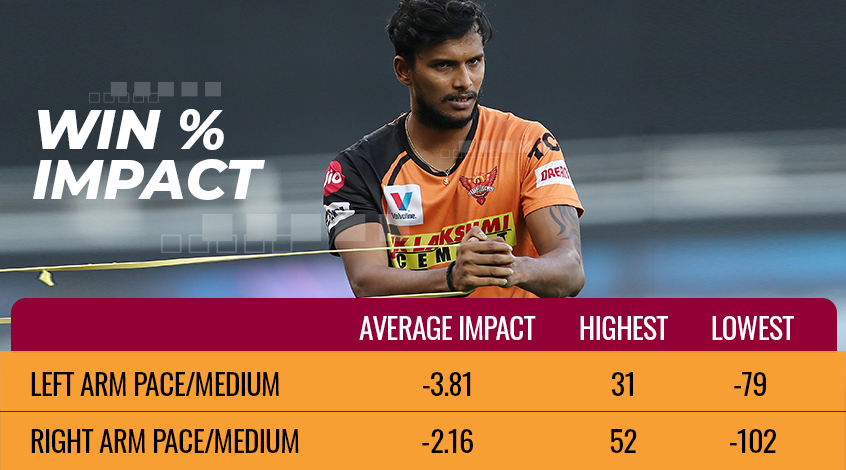 While the data takes into account all types of bowlers within that discipline/bowling type, it’s interesting to note that spinners have had a higher impact this IPL than their pace counterparts.

Among spinners who have bowled in at least 3 matches this IPL, their impact has been dominated by Rashid Khan, Rahul Chahar, Yuzvendra Chahal and Varun Chakravarthy, underlining the domination right-arm legbreaks have had in recent years.

But close on their heels are offspinners like Ravi Ashwin and Washington Sundar who may not have picked wickets, but have the ability to choke oppositions and wrest win% control.

The first list of bowlers are the ones who have recorded one positive impact performance in 50% of the matches. 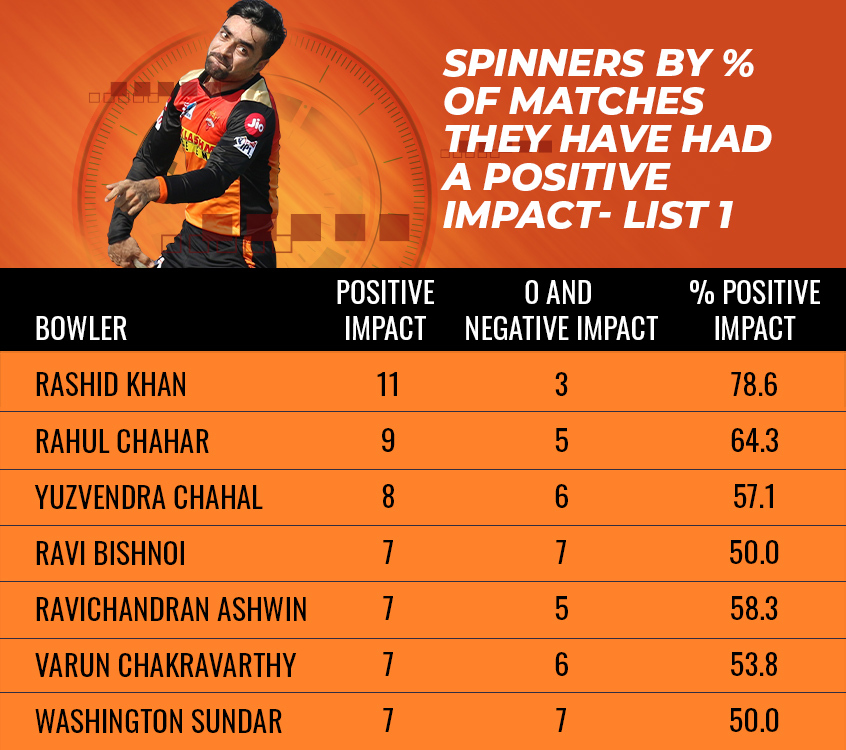 Rashid and Chahar lord over every other spinner with their sheer consistency that has taken their side to the playoffs. Sides with a high quality legspinner should fancy their chances in a modern-day T20 side. 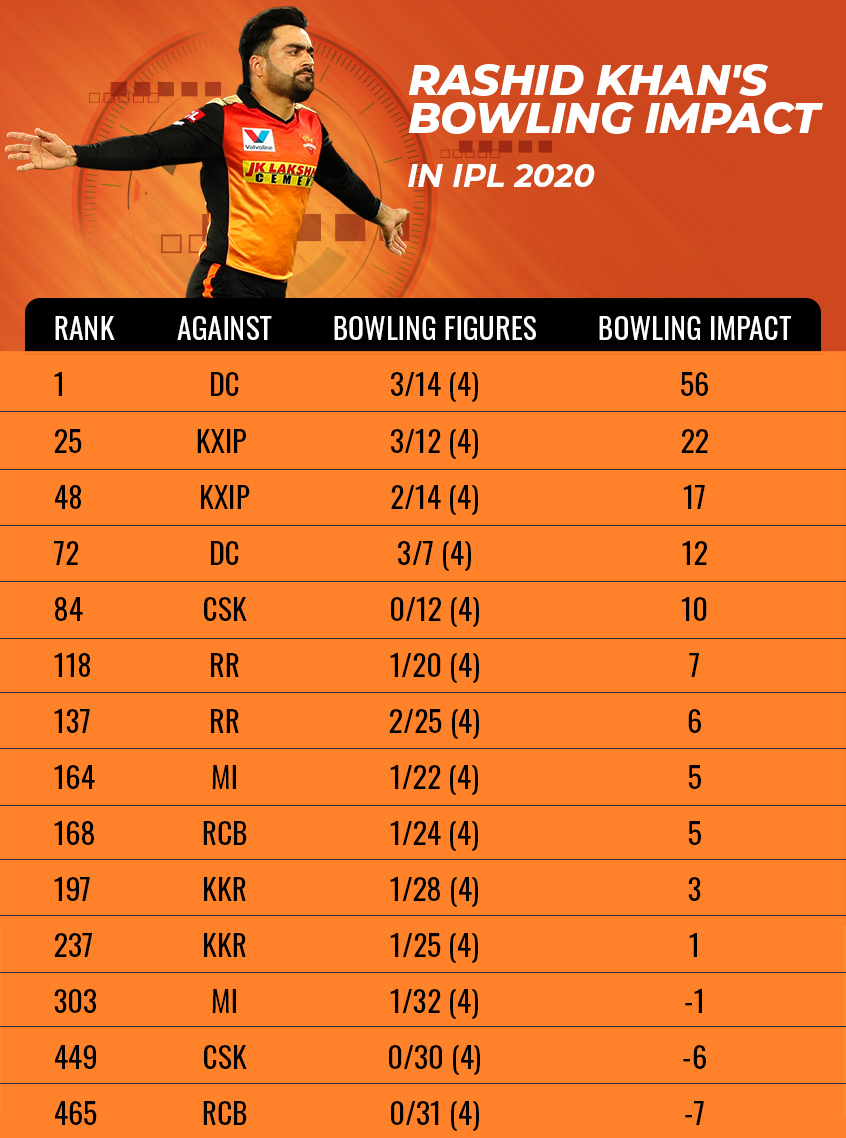 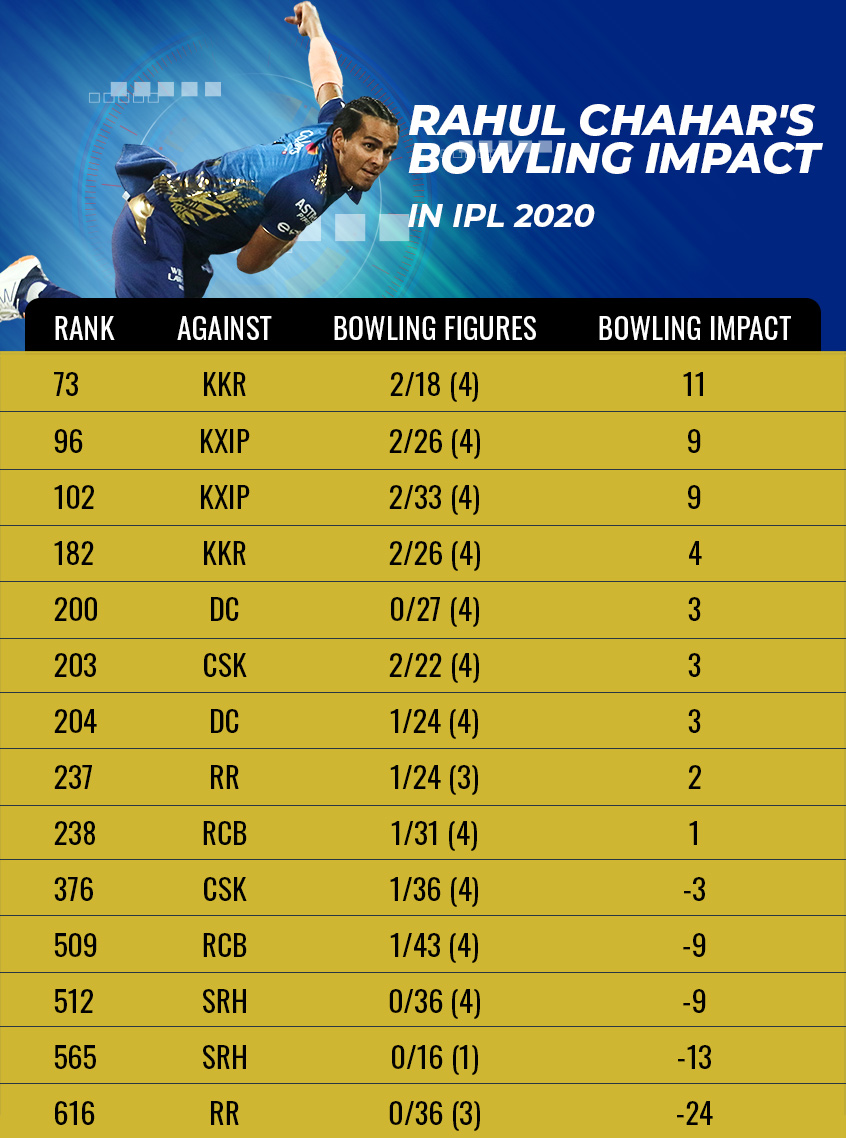 While these two have topped the list, there are more legbreak-googly bowlers who add to the top impact list (Chahal, Bishnoi, Chakravarthy). The offspinner’s association has its representation with the Tamil Nadu spinners Ashwin and Sundar in the list.

The next list of bowlers who have had a positive impact in less than 50% of their games are Rahul Tewatia and Axar Patel leading the list. Good additions in the list are Shreyas Gopal and M Ashwin. They are maturing as spinners with a good array of variations, but are probably not as consistent.

Glenn Maxwell is a surprise on this bowling list, given that his batting prowess in the IPL has been on the wane. Maxwell opening the bowling, competing with Bishnoi and Ashwin, has done a good job in keeping things quiet and creating a positive bowling impact performance in 2 games out of the 7 instances that he bowled. 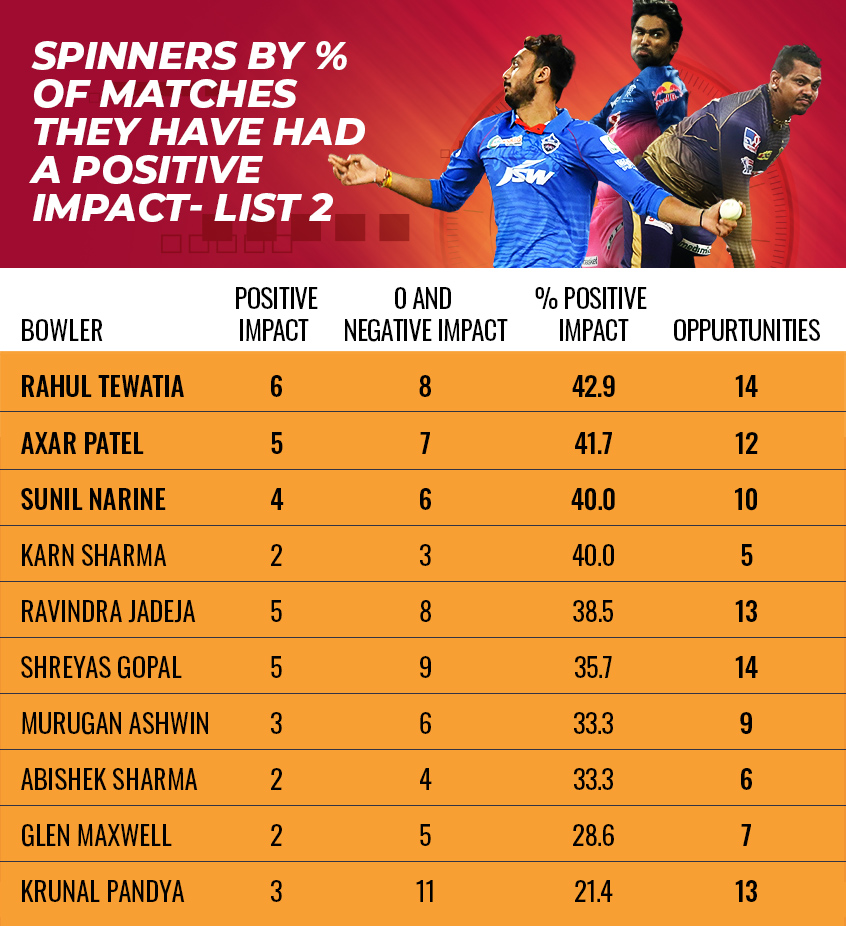 That makes Axar the first choice for a left-arm orthodox spinner in terms of impact with bowling, with Ravindra Jadeja and Krunal Pandya having clocked much lesser impact in the matches they played.  The trio have shown glimpses of form with the bat, with Jadeja having more to show among these lot in the IPL, but Axar is clearly winning the battle in the bowling stakes. 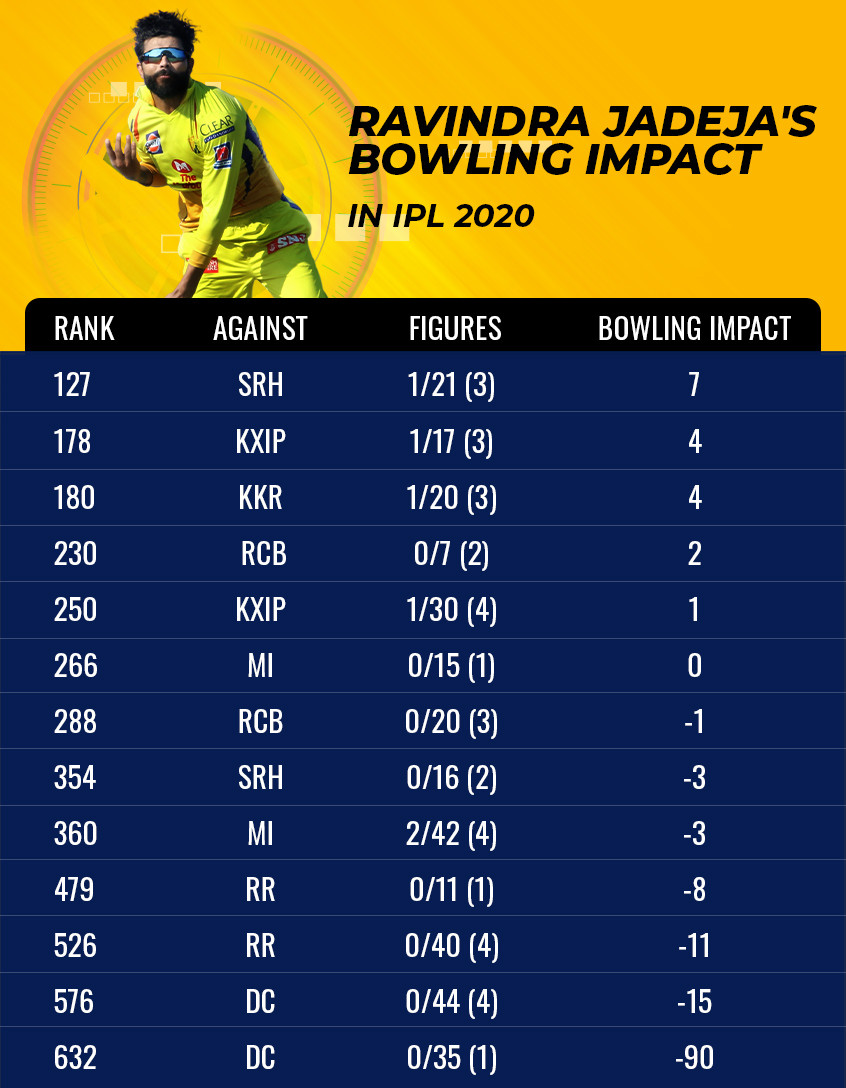 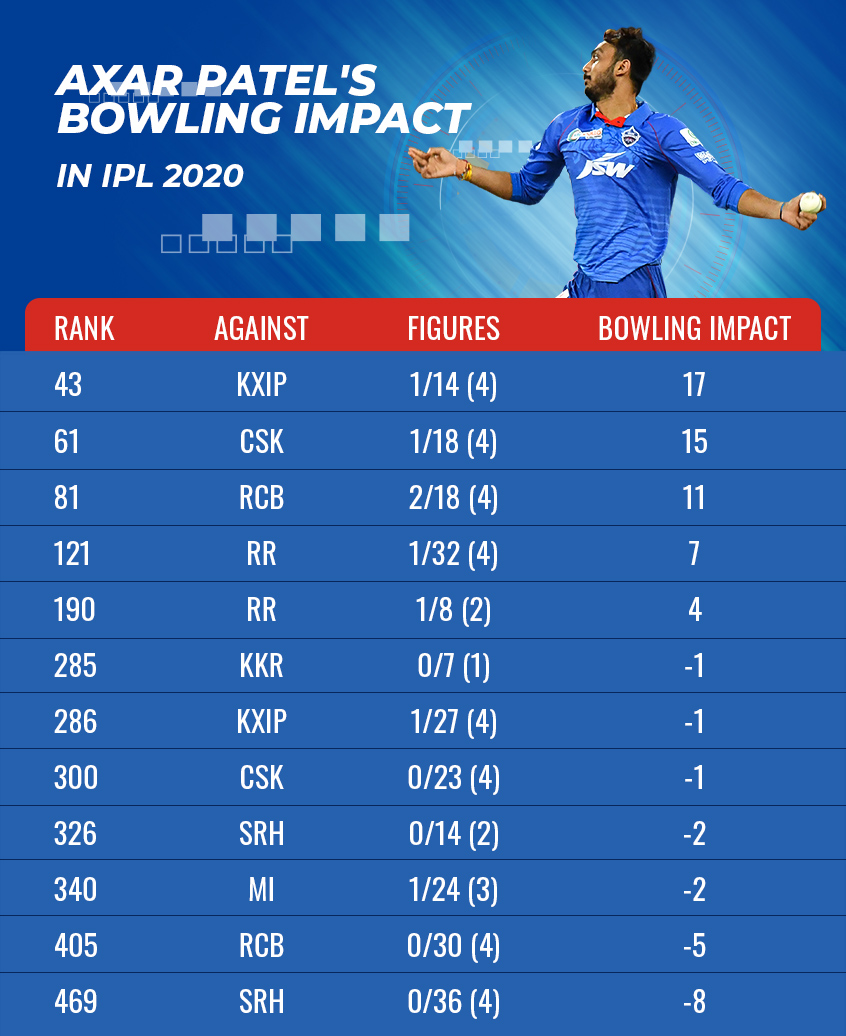 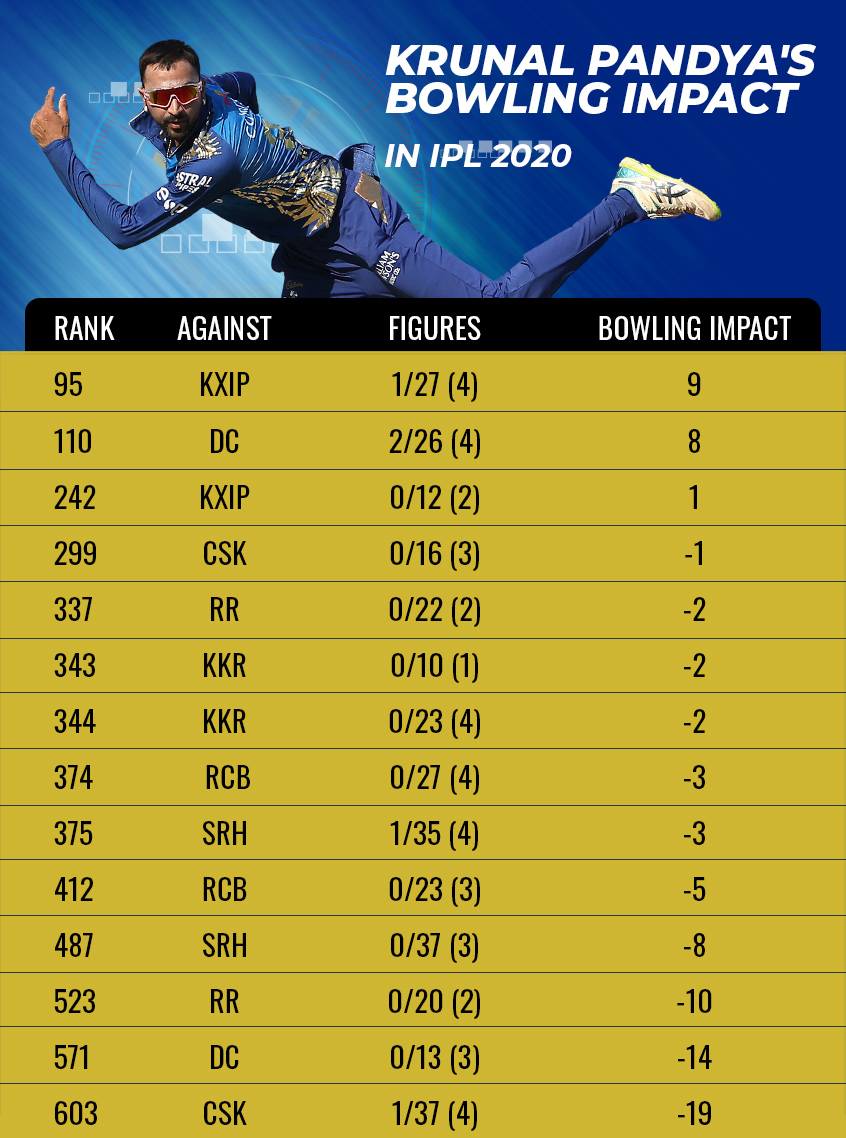