CSK has played five games on its home ground, and won all five. A balanced Mumbai will be desperate to change that

While watching CSK dawdle along in a chase of 161 against RCB the other night a cricket columnist commented on Twitter: Someone explain to me how this team team is top of the table?

It is the sort of sacrilegious remark for which, in earlier ages, people would have been burnt at the stake - but he had a point. Judged by any normal yardstick, the yellow-clad Dad’s Army has no business winning anything, let alone being the first team to be assured a place in the playoffs.

Look at the batting, for starters: Shane Watson, who opens, has just one innings of substance (a match winning 96 the other night against SRH). Suresh Raina, the team’s number two player, also has one knock to talk of: 58 not out against KKR. In the list of top-five innings by CSK batsmen this season, it is MS Dhoni who figures thrice: 84 not out against RCB, 75 not out against the Royals, and 58, also against the Royals. Kedar Jadhav and Ambati Rayudu have one 50-plus knock apiece; Faf du Plessis has a 54 and a 45. All this, in 11 matches played.

In any other team I would have been sacked by now, Watson said after his April 23 knock against SRH. He was right - 147 runs at 112.21 in 10 innings before that match winning knock merits the sack. The ageing Aussie opener doesn’t have the legs to run between wickets; with him it is four or nothing, and it took 10 matches of relative nothings before he produced that one innings. You don’t win tournaments with that kind of opener Fun fact: This year, CSK has lost 21 wickets in the powerplay - the most among all teams. 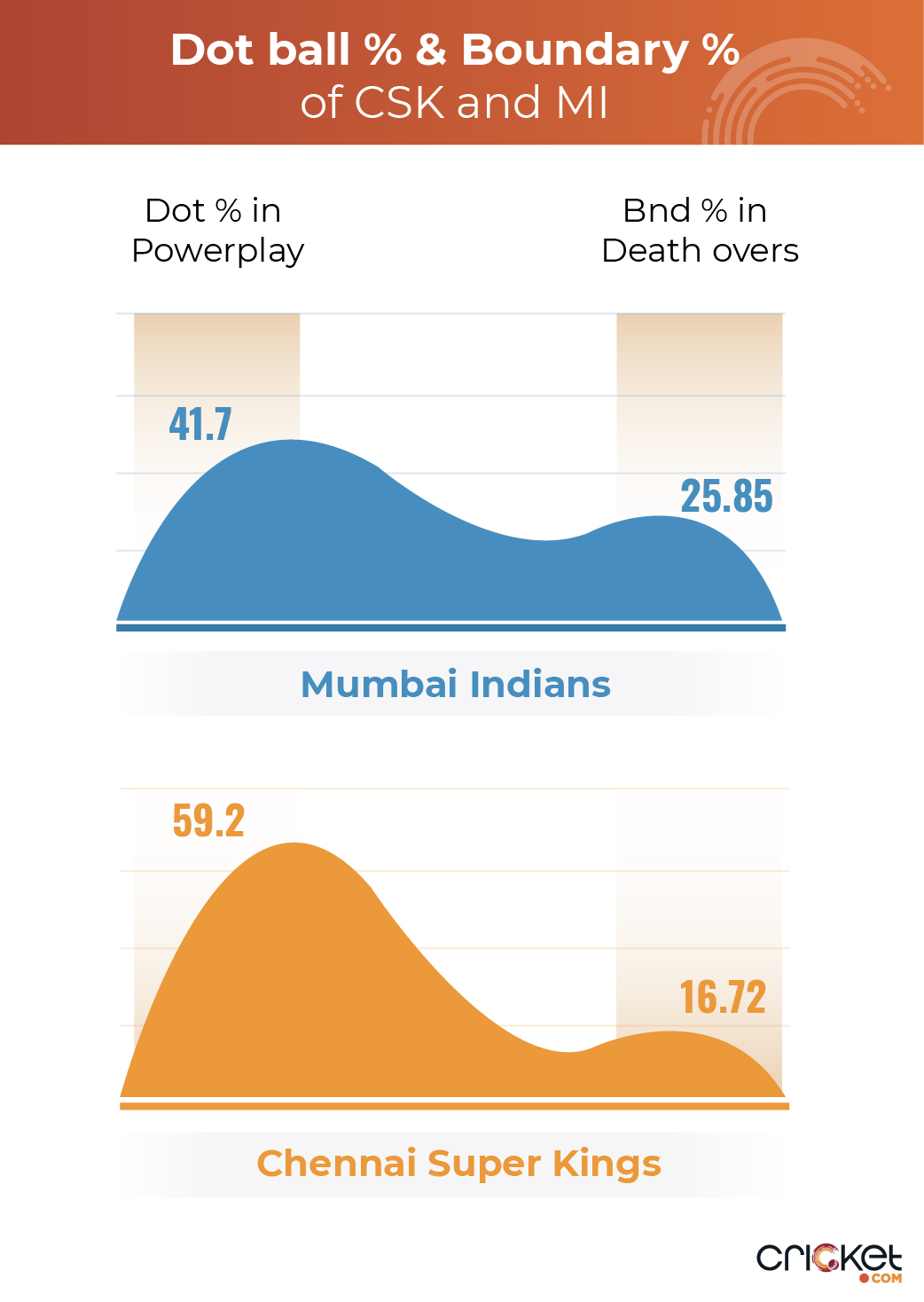 The chart above clearly highlights the first of CSK’s problems: in powerplays, the side has the highest dot ball percentage of all teams this season. Watson strikes at 132.06 (and even that is inflated by his one good knock), Rayudu at 90.6, and Faf du Plessis at 110.49. (Interestingly, in this game they are up against Mumbai Indians, which plays fewer dots in the powerplay than any other side).

Couple that with the fact that CSK’s opening partnership rarely lasts beyond the first six overs, and you see how the dominoes begin to knock over each other: Low scoring powerplays and early wickets transfers the pressure to Raina who has to go hard and bat long - a near impossible task for a batsman in the autumn of his career.

Behind him comes Kedar Jadhav, whose forte is to bat with carefree abandon but who, coming in with the side in trouble, is forced to play against natural instinct. All of which leaves Dhoni too much to do in company of the likes of Ravi Jadeja, who in seven knocks (not out thrice) has a sum total of 76 runs at a strike rate of 104.1, and Dwayne Bravo, who thus far has managed a grand total of 44 (including one innings of 27) in five knocks, at 137.5.

That is an underwhelming batting lineup – and the top five reasons CSK has been successful despite all of this is, numbers one to four, MS Dhoni and number five, the MA Chidambaram Stadium, where CSK has perfected the art of the choke to such an extent they have won all five games played there this season. And that sets up an interesting contest within the game: Dhoni versus Bumrah. 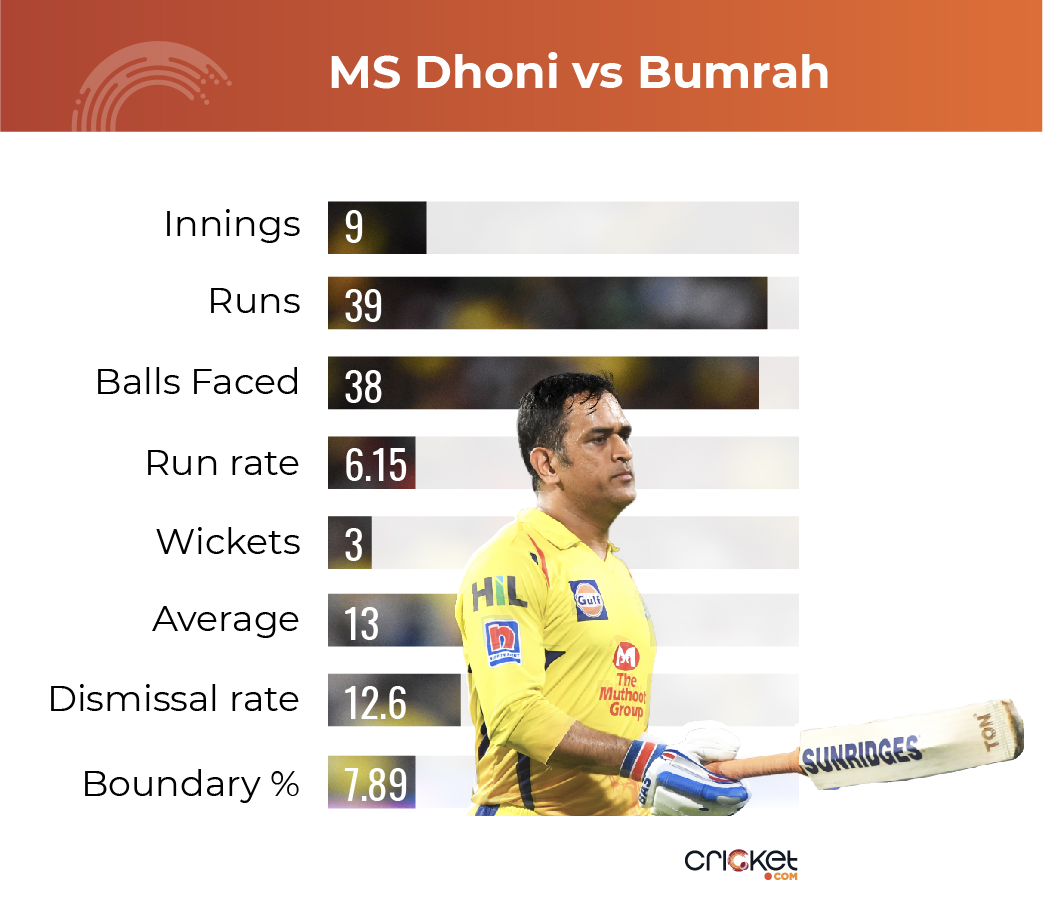 Across seasons starting in 2014, Dhoni has managed only 39 runs off 38 deliveries from Bumrah in nine innings, and the ace death bowler has taken his wicket thrice - a statistic so obvious, you can bet big it will figure in Rohit Sharma’s planning.

What makes it easier for Rohit to hold Bumrah in reserve against Dhoni is that in Beherendorff (who is likely playing his last game before heading off to Australia to prep for the World Cup), Malinga and Hardik, he has other quicks to call on while keeping Bumrah on ice.

The four work well in tandem - in the previous meeting between the two sides, on April 3 at Mumbai, CSK managed only 133/8 chasing Mumbai’s 170/5 at the Wankhede - and in that game, the four quicks bowled a total of 96 balls of which an astonishing 54 were dots (They also took 8 wickets between them with Bumrah, surprisingly, the one going wicketless).

An area where Mumbai is clearly ahead of its rivals is in death-overs bowling. 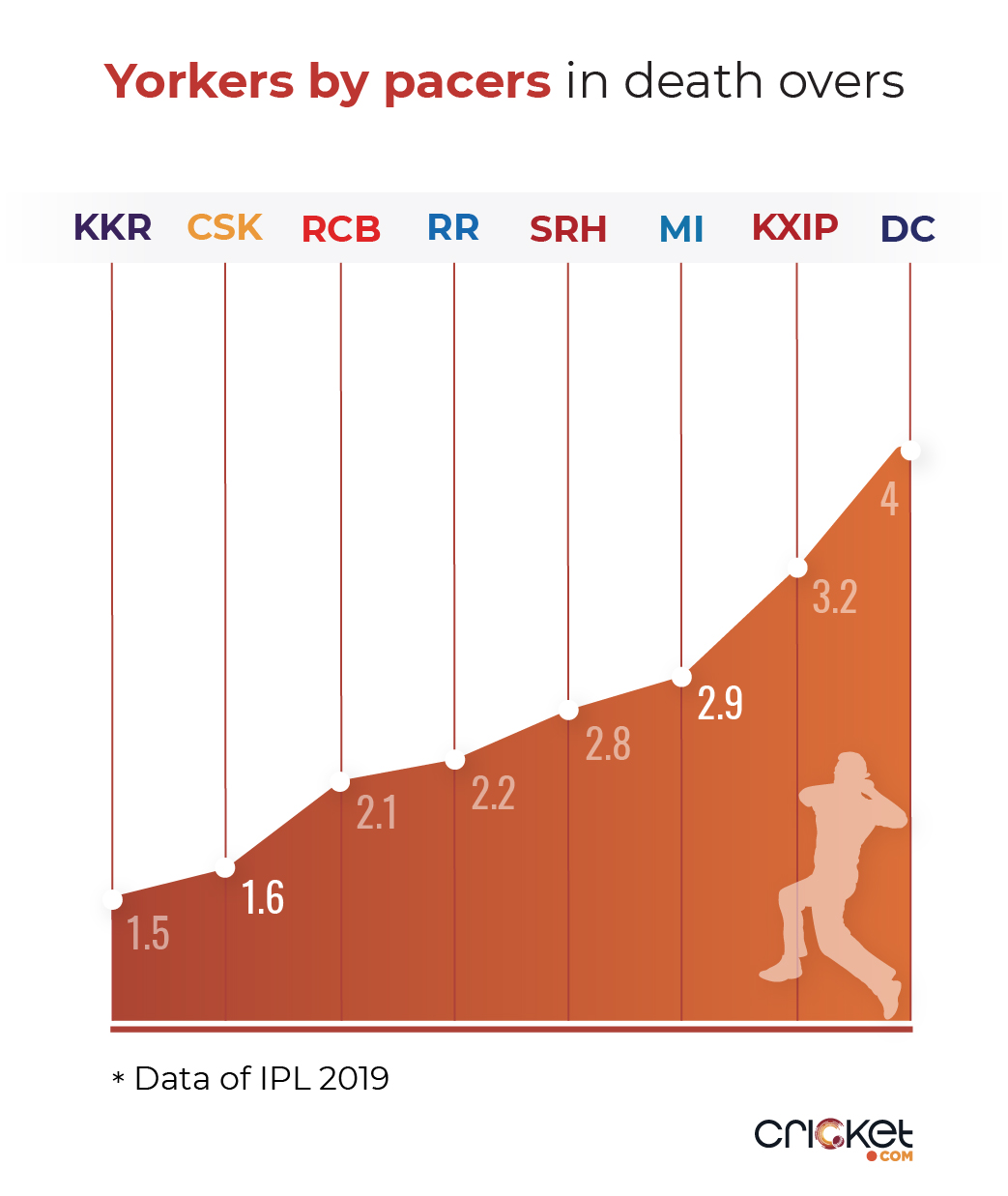 The chart shows the gulf in this vital aspect. And the reason MI does so much better is evident - Bumrah and Malinga are masters of the yorker length and use it extensively in their final spells; against that, CSK has only Bravo as a decent exponent of the unhittable ball - and he is just getting back to a semblance of bowling form after sitting out a few games with injury.

With Rahul Chahar and Krunal Pandya to back up the pace battery and slow things down at need, Mumbai has a beautifully balanced attack.

As luck would have it, they will find conditions closer to their liking in Chennai. The MAC started this season as a nightmare ground for batsmen - the pitch was painfully slow, the ball rose shin high if that, it turned even when spinners weren’t trying to make it turn… it was, as home skipper Dhoni said more than once after winning games, the worst sort of wicket for T20s.

After an April 9 home game against KKR (108/9 KKR batting first, which shows you what the wicket was like), CSK spent a lot of time on the road. By the time of CSK’s next home fixture (April 23 versus SRH), the groundsmen had put in the hard yards, and the Chennai track actually became much better for batting (SRH made 175/3 batting first and CSK chased it down, typically with one ball to spare, on the back of Watson’s one big knock of the season.

If the second pitch has been equally well prepped it is Mumbai, not Chennai, that should enjoy the conditions. Its batsmen are in decent form with Rohit, Suryakumar Yadav and Krunal all making runs at strike rates in excess of 120; opener Quinton de Kock is going well at 137.45. So there is batting down the line, and then there is the rocket-propelled finish provided by Kieron Pollard, who is striking at 175.67, and Hardik Pandya, who is going at a scarcely credible 189.76 (241 runs in 10 knocks; not out four times).

Mumbai, despite a puzzling propensity to keep losing to Rajasthan Royals, looks like a settled team. Noticeably, in this season it has defeated both leading contenders, CSK and Delhi Capitals. If at all there is scope for improvement, it would lie in a slight tweak to the batting lineup, which, reworked, would read: Quinton de Kock, Rohit Sharma, (Ben Cutting - as a floater you use if a wicket falls early, else push deep down the order), Suryakumar Yadav, Hardik Pandya, Krunal Pandya, Kieron Pollard.

The logic here is that Pandya, in the form of his life, can be used even more effectively if he comes in with enough balls to play. If he fails, then depending on the overs left Krunal can come in to steady things, or Pollard can walk in to pick up where Pandya left off.

As the teams head into a must-win game, much of MS’s fine mind will be focused on a memory from when these two teams met last, at the Wankhede on April 3. Mumbai looked dead and buried on 125/5 at the end of 18 overs. Then came two overs of unprecedented mayhem as the two added 45 runs in just 12 balls, Hardik scoring one run in his first two balls and then 24 off his next six while Pollard chipped in with 17 off 7.

The last over was bowled by Chennai’s sole death over specialist, Bravo - and it disappeared for 29 runs. Bravo sent down a yorker - and Pandya responded with a sublime helicopter shot played with swiveling wrists that deposited the ball deep over long on. It was a sublime MS Dhoni special - only, this time, MS was the helpless spectator.