Issues to address for both sides as rain-threat looms large

Issues to address for both sides as rain-threat looms large

It was a contrasting beginning to the series compared to when these two sides clashed in August 2016 at Fort Lauderdale. Back then, West Indies scored 245 in the first T20I and India gave the defending World T20 champs a run for their money, eventually falling short by just one run. While there were two centurions – Evin Lewis and KL Rahul – in that match, three years on, both teams struggled to even make it to the 100-run mark. But in the end, it was India, who were largely helped by their bowlers, who came out on top.

West Indies were behind the eight-ball from the time they lost five wickets for just 33 runs in the first Powerplay. It was always going to be a huge ask for them to get a competitive score when half the side was already back in the hut. In fact this is not the first time West Indies have suffered this fate.

The Indian bowlers, especially debutant Navdeep Saini, bowled with pace and troubled the batsmen with bounce, which included a rare 20th over wicket-maiden as well, which is only the fourth such instance in a T20I. He mixed up his lengths quite well but was also a tad erratic bowling five full tosses, which went for eight runs and fetched the fortuitous wicket of Kieron Pollard. The Windies batsmen may not be as generous the next time of asking but they did find a way to earn yet another unwanted record in their favour.

In the weeks leading up to the recently-concluded World Cup, the No 4 slot was the talk of the town when it came to the Indian team. Even two weeks post the World Cup, one cannot safely zero down on a single candidate for that spot. That seems to be the case in T20Is as well. India went in with Manish Pandey in the first T20I for that spot. However, that might not be a long-time solution as his strike-rate dips significantly when compared to when he bats at No 3. With Virat Kohli certain to occupy the No. 3 spot, it makes very less sense to have Manish play at four ahead of Shreyas Iyer or KL Rahul for that matter, who bat at a much better pace when they bat at two down or below.

West Indies do have an excellent bowling line-up, with the likes of Oshane Thomas, Sheldon Cottrell and Sunil Narine in the team. However, their batsmen will have to give them more runs to play with. Having brought in Jason Mohammed in place of the ‘injured’ Andre Russell might be one of the solutions. He was in excellent form in First-Class cricket and could be a handy batsman, who could play a sheet anchor’s role around explosive batsmen like Evin Lewis or Shimron Hetmyer among others.

There might not be much change in the pitch. The surface on Saturday was on the slower side stopping on batsmen, making stroke-play extremely difficult. A score of 130-140 might just be enough. As Carlos Brathwaite said in the post-match press conference, it is important to assess the conditions well, which is what his team failed to do.

Heavy showers are predicted for Sunday’s match and we might be in for a curtailed battle. However, the more time the pitch spends under the covers, it will assist the quicker bowlers better. Saini and co might dominate proceedings once again. Incidentally, the second match of the series at the same venue in 2016, featuring these two sides was washed out. Repeat of the same, maybe?

This series was tipped to be the first step in the build-up to the ICC World T20 2020. This was also both team’s first match since the World Cup. With the first game out of the way, we will hopefully see hard-fought matches for the remainder of the series. 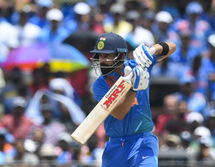