It was nice to get Kane out for a change: Boult 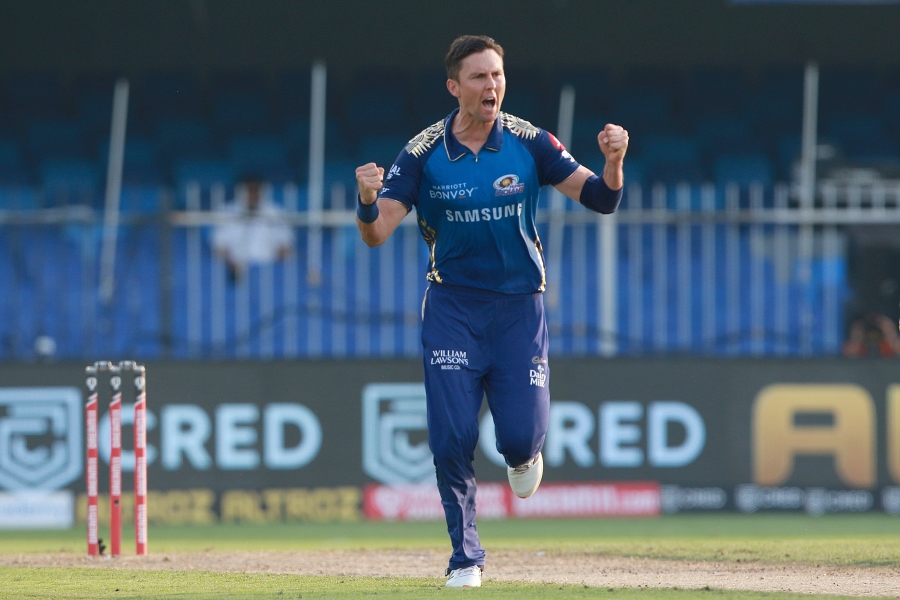 It was nice to get Kane out for a change: Boult

Boult deceived his New Zealand skipper with a slower one for the bragging rights, ending with tidy figures of 2/28 in Mumbai's 34-run win over Sunrisers

Kane Williamson usually gets the better of team-mate Trent Boult in the New Zealand nets but it was the pacer's turn in the game between Mumbai Indians and Sunrisers Hyderabad in the IPL.

Boult deceived his New Zealand skipper with a slower one for the bragging rights, ending with tidy figures of 2/28 in Mumbai's 34-run win over Sunrisers.

"I don't actually get Kane out too much in the nets. So nice to do so, but more important to get the wicket," said Man of the Match Boult at the post-match presentation.

Mumbai did well to defend 208 in batsmen friendly conditions.

"We had watched a bit of cricket played on this wicket. Small ground too. It was a good effort by the boys. We had something to bowl to. I am known for swing and not for slower ones with the new ball, but you just use variations and angles.

"The conditions are very foreign for me, very hot, but you have to be clear in your head, execute what you want to do, and not worry about the ball travelling out of the park," said the left-arm pacer.

Mumbai skipper Rohit Sharma said the wicket was on the slower side and it was not easy to score 200.

"The wicket looked good but it was slightly on the slower side so getting past 200 was a great effort. We didn't have any total in mind. We back our bowlers to do the job. And that's what they did," said Rohit, who was out after hitting a six.

Pandya brothers -- Hardik and Krunal -- and Kieron Pollard proved their immense value to the team yet again with a brutal display of hitting in the death overs.

"We decide the middle order depending on how the game is going. Match-ups, match situation etc. It is great to have three power hitters. Today, Krunal also showed his value."

"The stats do tell the tale, their two most experienced bowlers (Boult and Bumrah), they bowled well towards the end and we couldn't target the fence," said Warner.

"Look, I think we didn't gauge the wicket properly, during the day time it's perhaps a bit slower and when the ball gets soft - it's difficult to hit the wicket harder.

"They had runs on the board and we were left chasing at 10 runs per over - we didn't string partnerships together to take the chase deeper.

"It wasn't easy to start off (while batting), lack of partnerships as I said, losing wickets back-to-back isn't ideal, but there were a few positives coming out of this match."

"It was the first game here, our next game on this ground will be under lights, so obviously the ball might come onto the bat a lot better. Two new guys came in today, obviously with Bhuvi injured, there are things we can work on during training.

"(On execution) I think I probably counted around 7 to 8 full-tosses towards the back-end, we didn't nail the yorkers right - these were our plans which we didn't execute consistently," Warner added.

NEWS
Getting Warner out in Super Over was special: Ferguson
Losing skipper Warner was at a loss of words to explain his feelings

NEWS
Mumbai hitters capitalised when our bowlers erred in length: Laxman
According to Laxman, the dismissals of David Warner and Kane Williamson were crucial during the chase and too much was then left for the youngsters