'It's not a war': Wasim calls for calm in India-Pakistan clash

'It's not a war': Wasim calls for calm in India-Pakistan clash

Wasim Akram wants the match to be enjoyed

Pakistan legend Wasim Akram has urged fans on both the sides of the border to stay calm during his country’s potentially volatile World Cup clash against bitter rivals India in Manchester on Sunday.

Wasim, who is in England for the match as a commentator, labelled the latest meeting between the old enemies as “the biggest match of the World Cup”.

But with passions running high among both fanbases and political relations between the countries extremely tense, Wasim said the match should be enjoyed rather than used to inflame the situation.

“This can’t be bigger,” Wasim told AFP on Friday. “India and Pakistan playing at the World Cup with over a billion audience is the biggest thing in cricket, so my message to both sets of fans to enjoy it and stay calm.

“One team will win, one team will lose, so stay graceful and do not take this as a war. Those who project this match as war are not true cricket fans.”

And former pace bowler Wasim admitted any India against Pakistan match has pressure, let alone one in the World Cup.

“Who can realise the pressure more than me?” said Wasim. “I used to look forward to a match against India because it brings the best out of the players from both the sides.”

Pakistan have never beaten India in six World Cup matches dating back to 1992, but Wasim thinks that poor run could change on Sunday.

“Pakistan can beat India through controlled aggression,” said Wasim, who was part of the Pakistan team in the 1992, 1999, 2003 World Cups when they lost to India.

He was sidelined through a shoulder injury when India beat Pakistan in the 1996 quarter-finals.

“Yes, I don’t have fond memories of the World Cup matches against India but I have enjoyed all these matches over the year as fans are glued to television wherever they are. It will be like that again on Sunday,” he said.

Wasim admits India have a stronger line-up, but he insists Pakistan can still shock their rivals in a one-off match, as they did in the 2017 Champions Trophy final.

“Yes, India have a strong batting and bowling line up but Pakistan can match them. When it comes to India and Pakistan game the team that handles the pressure well wins the day,” he said.

India have five points from three matches after beating England and South Africa, while their match against New Zealand was washed out on Thursday.

Pakistan have lost against the West Indies and Australia and shocked hosts England, while their match against Sri Lanka was washed out. 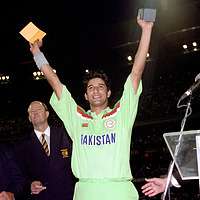 NEWS
Sad that people still use my name to promote themselves: Wasim Akram
Wasim said even he could say a lot of negative things about others but refrained from doing so