Delhi get their first win against KXIP since April 2017

Delhi’s skipper, Iyer held his nerve to ensured that Delhi get their first win against KXIP since April 2017. Delhi was on the verge of another capitulation but Iyer maintained his composure and got the win with two balls to spare. Delhi has now lost 35 wickets at death, the most by any team this year.

164 was never going to be easy to defend especially when there is dew. Delhi’s openers Shaw and Dhawan started cautiously. Punjab got the bonus wicket of Shaw, with help of a direct hit from Mandeep. Shaw’s wicket proved to blessing in disguise for Delhi as Dhawan started tonking Punjab’s bowling all-round the park. Skipper, Iyer too joined the party and both added 82 runs for the 2nd wicket. Punjab bowlers were struggling with the dew and were going at just below 10 RPO.  This year after KKR and RR, KXIP bowlers have the worst average (39) in the mid phase.

KXIP suffered a huge blow when their highest run scorer KL Rahul was dismissed by Lamichhane in just the second over of Punjab’s innings but the universe boss was not going to sit back and take it deep as he has usually done in this IPL. Gayle made his intentions clear when he scored 16 runs of Lamichhane. Wickets kept on tumbling at the other end but Gayle continued with the onslaught and brought up his half century in 25 balls, joint fourth quickest this season. Gayle has scored 25 % of KXIP’s total runs this season.

Mandeep was playing second hand fiddle and letting Gayle do the hitting but once Gayle was out in the 13th over thanks to a special effort from Ingram at the boundary Punjab lost their track. Punjab could only manage 57 runs in the last seven overs. Newbie, Harpreet scored a quick fire 12 ball 20 to take Punjab past 160 run mark. Punjab lacked a finisher and that has been their story in this IPL so far.

In the 13th over when Lamichhane took the wickets of Gayle and Curran Punjab’s winning probability from 49 to 34 %. Once Gayle got out Punjab’s chances took a huge dip. 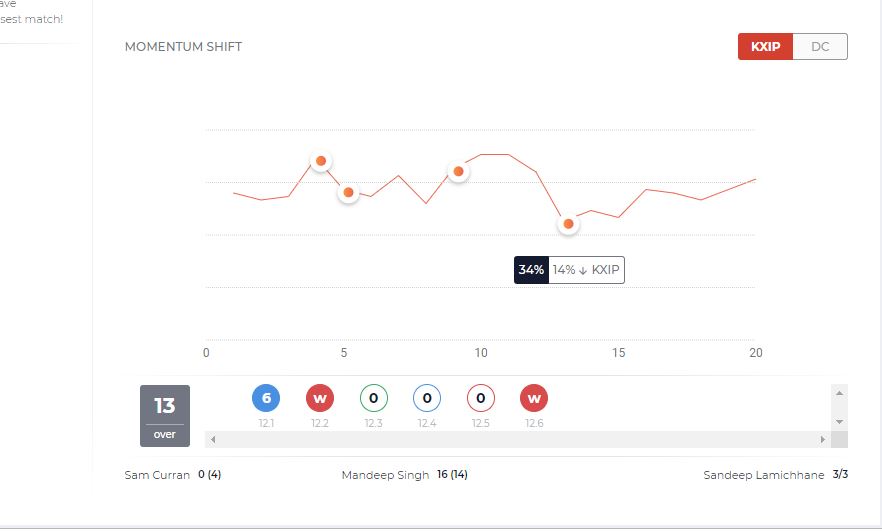 In the 18th over, Colin Ingram struck boundaries of Mohammed Shami and ensured that Delhi’s winning probability from 81 to 94 %.