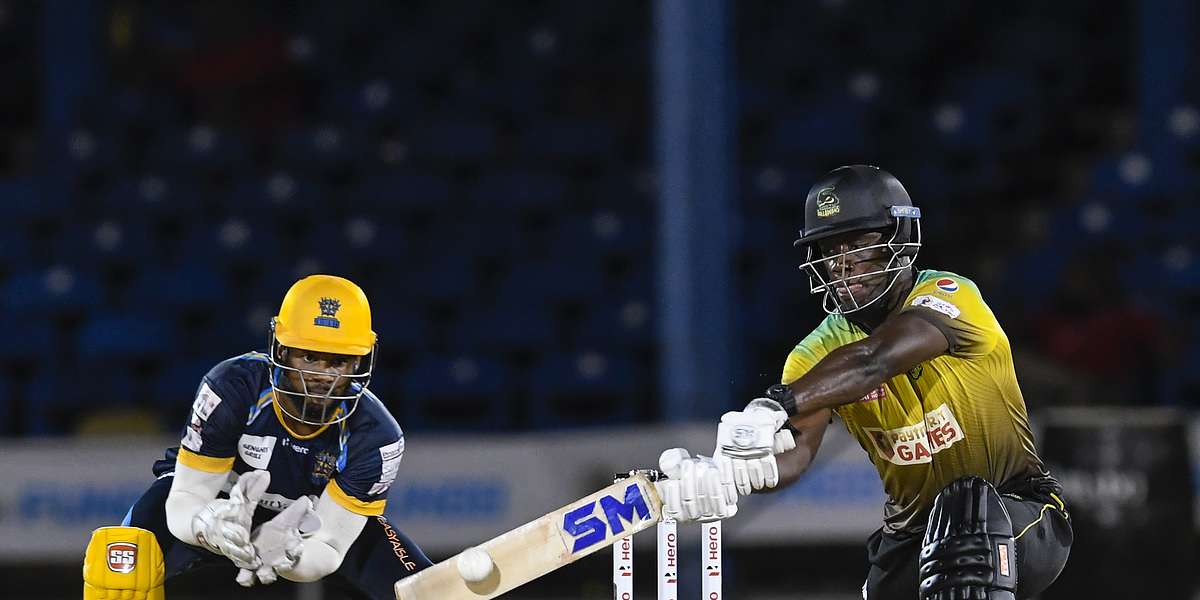 How the mighty have fallen! Defending champions, Barbados Tridents have crashed out of contention for the semi-finals after being humbled by the Guyana Amazon Warriors, yet again. A third consecutive sub-100 total pretty much sums up their 2020 season. A stark reversal of last year's spirited effort. They now take on the Jamaica Tallawahs, who after meandering around the bottom half of the table, have successfully managed to make it to the semis. A point in the rain-abandoned game against the Patriots was enough to see them through.

The Tallawahs have one less factor to worry about and they'll want to storm into the semis with winning momentum. On the other hand, there's plenty at stake for the Tridents and skipper Jason Holder will want to finish the CPL 2020 season on a high.

In the reverse fixture played on the 26th August, the Tridents won comfortably by 36 runs. Kyle Mayers won the player of the match for his 85 off 59 deliveries. 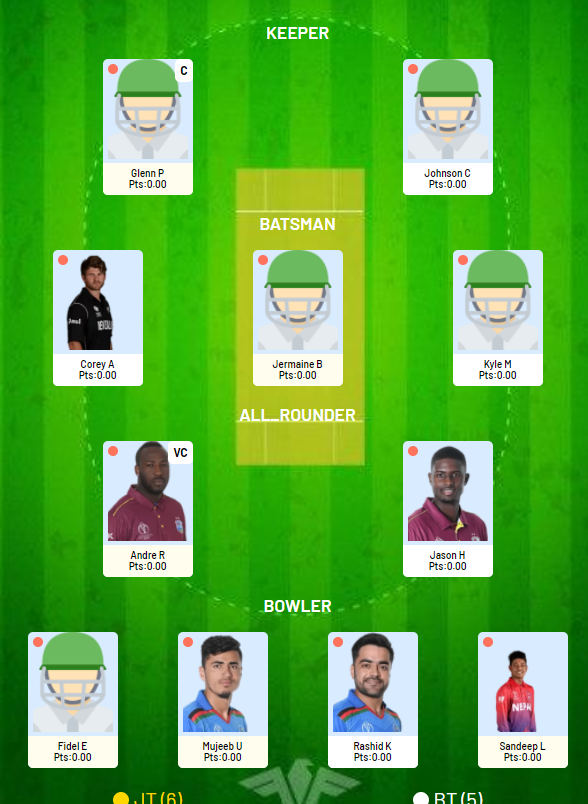 While you could go for the above team, you also have the option of choosing your own team from cricket.com Fantasy Research Centre. Based on the algorithms we come up with six different teams that could fetch crucial points. 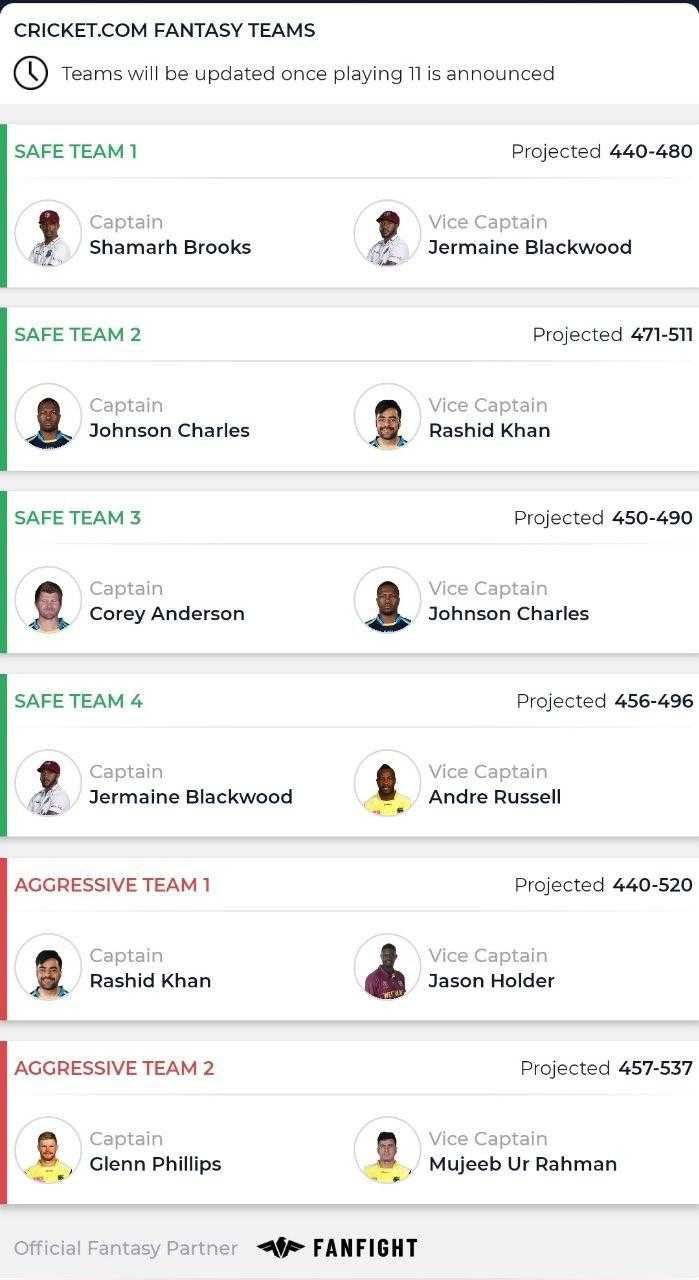 Tarouba has hosted 16 matches this season and the average score batting first is 141. The average second innings total drops down to 127 which clearly indicates that the pitch slows down as the game progresses. Teams batting first have won 7 matches while chasing has resulted in 8 wins.

CPL 2020 has favoured the bowlers, especially the spinners. They have bagged 146 wickets, which is nearly 51% of the total wickets. A wicket every 19.1 deliveries.

At Tarouba, spinners have picked 75 wickets - 46% of the total. The offies have bagged 20.85% of the wickets while the wrist-spinners' contribution has been 18.4%. The balls/dismissal ratio for the tweakers here is 20.4 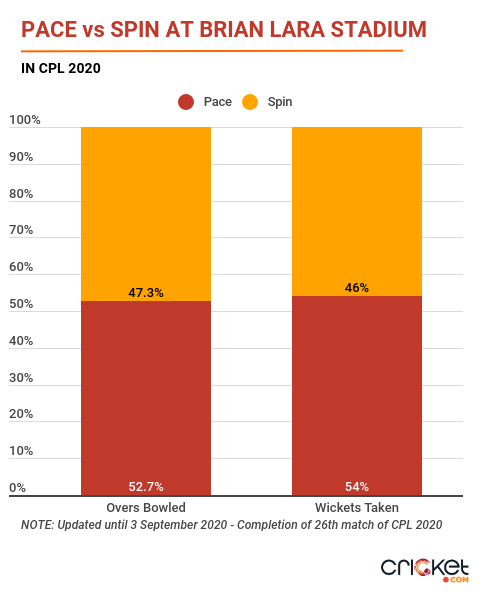 Tallawahs have heavily banked on Glenn Phillips, Mujeeb Ur Rahman, Sandeep Lamichhane and Andre Russell this season. Phillips' contribution to the Tallawahs reaching the semis has been magnanimous. The dashing opener has scored 248 off the 936 runs scored by the unit. An impressive 26.4%.

Mujeeb is the 2nd highest wicket-taker this season. He's picked 13 wickets and his balls/dismissal ratio is a majestic 13.8, also the 2nd best in the league. Not only has he tricked batters but also has kept a check on the run-rate. The Afghani mystery spinner has conceded only 4.63 runs/over(the best in the tournament - minimum 5 wickets). Russell has scored 2 fifties so far but he wasn't able to take his team home on both occasions. Should he bat up the order? Pushed to number 5 maybe?

Sandeep Lamichhane's dexterity makes him a stern choice. He's been a top performer for the Tallawahs. 10 wickets in 7 innings with the balls/wicket ratio of 16.8(E/R - 4.85). Asif Ali, Jermaine Blackwood, Nkrumah Bonner and Fidel Edwards could also provide stability to your fantasy teams. 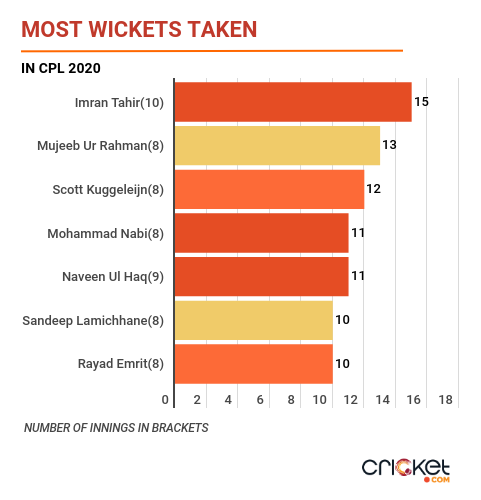 From the Tridents' corner, Kyle Mayers, Johnson Charles, Rashid Khan, Jason Holder and Mitchell Santner have done the majority of the scoring as far as fantasy points are concerned.

There could be some interesting player matchups to watch out for

Johnson Charles' T20 career strike-rate is a decent 129. However, against slow-left arm orthodox his strike-rate lessens to 114.3. The right-hander has succumbed to left-arm orthodox spinners 29 times. Against Veerasammy Permaul, Charles has fared relatively better. In 9 innings, the opener has scored 69 runs off 55 deliveries and has been dismissed only once. 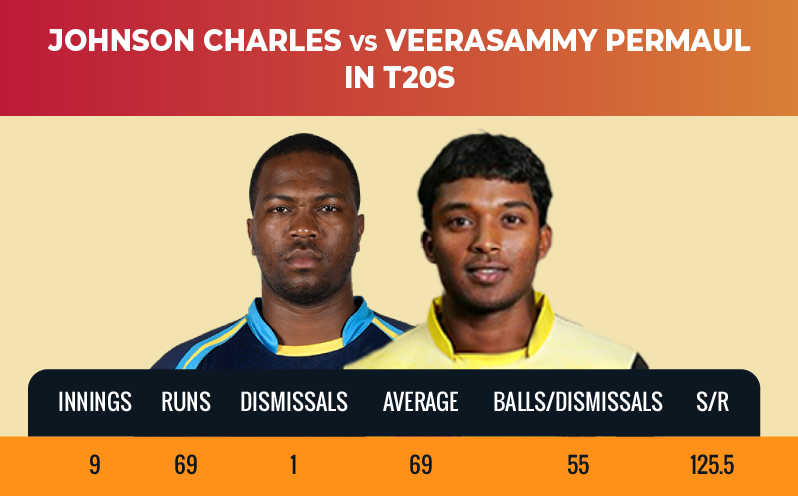 Glenn Phillips vs Mitchell Santer will be a battle to behold. While the right-handed opener has looked impeccable, his numbers against Santner look extremely bleak. In T20s, Santner has dismissed him thrice in 12 deliveries. Getting Phillips out early will be crucial for the Tridents and they can surely resort to this ploy 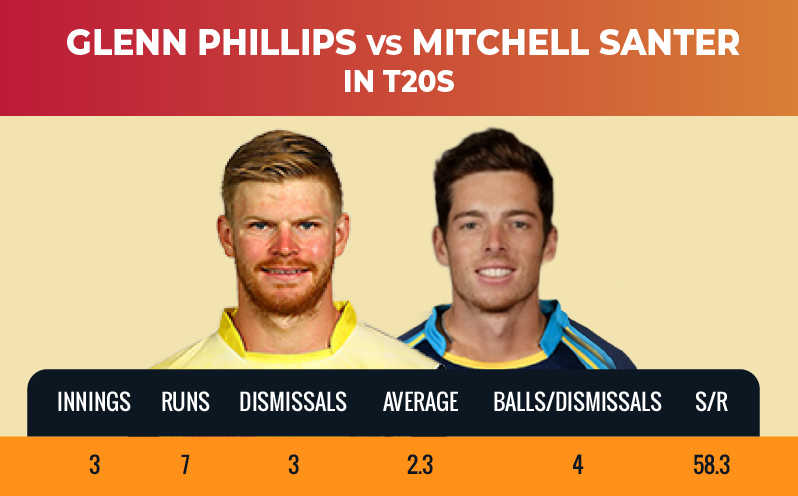 Glenn Phillips currently is the best batsman in the league and by a distance. He's amassed 248 runs at 41.33 at a rate of 128.49 runs per hundred deliveries. Phillips has smashed 17 sixes in the tournament so far - joint most with Evin Lewis. As far as fantasy points are concerned, he's averaged 90 points every game. Jamaica's wicket-keeper batsman is a clear favourite to lead your fantasy cricket teams. 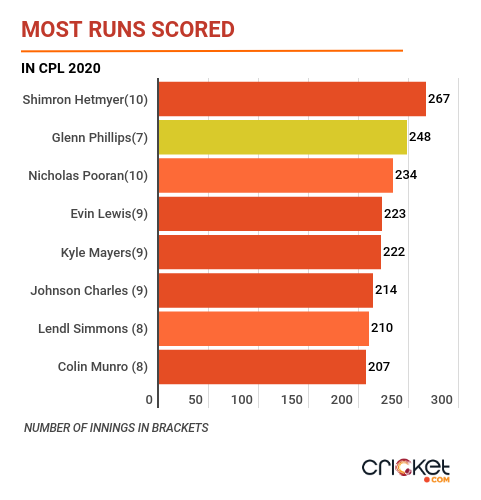 Andre Russell: Tallawahs have 2 league games remaining and their biggest conundrum right now is to sort 'Andre Russell's batting order'. He's come into bat at number 6 and 7, scored a couple of fifties but both times, his side finished second best. In T20Is, at number 5, Russell averages 29 and his strike-rate is a colossal 177. In CPL 2020, his strike-rate at number 7 is a ‘not-so-russelly’120.5. Clearly, Jamaica should promote him up the order and let Dre Russ be the marauder we all know he is.

Kyle Mayers: Barbados Tridents' last three scores in the CPL were 89/7, 92 all-out and 89/9. They've seemed completely out of sorts and to pick an X-factor from this unit becomes extremely dicey. The last time these two teams met, Mayers scored a match-winning 85 and that makes him a player to keep a keen eye on.

Jason Holder: Jason Holder is undoubtedly one of the best all-rounders in the world, but CPL 2020 hasn't worked to his liking. The skipper has picked 9 wickets so far and has scored 123 runs at a healthy strike-rate of 129.47. He's a far better batsman than what the numbers suggest and he might just spoil the party for the Tallawahs. Well, he's certainly got the ability. Watch out for Jason Holder.