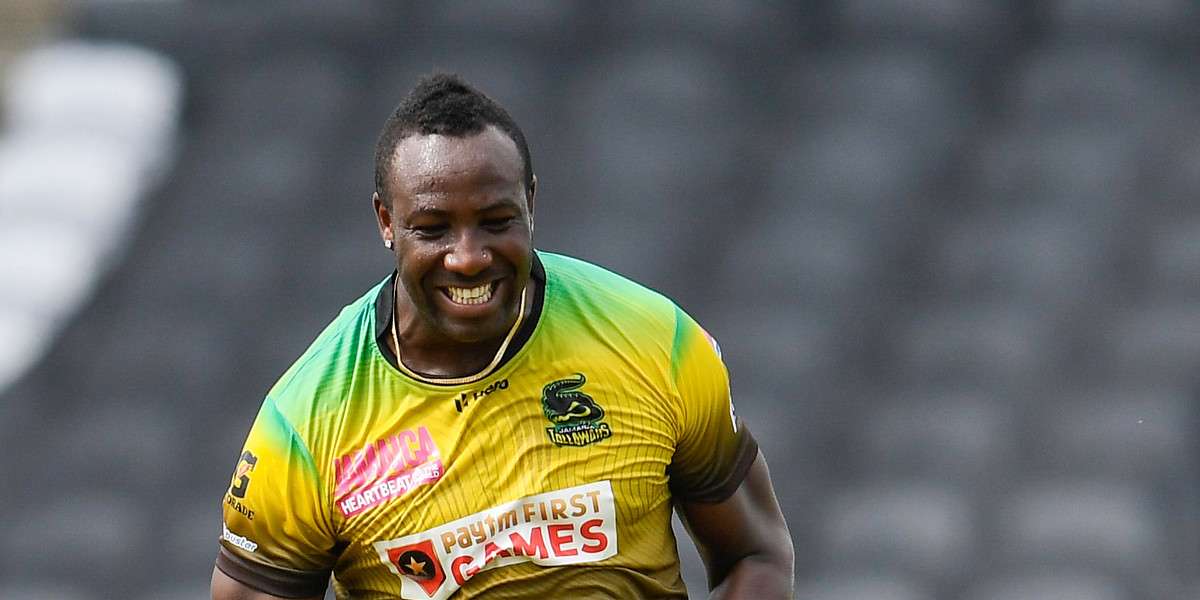 Guyana Amazon Warriors have had a mixed start to their 2020 Caribbean Premier League (CPL) campaign. While they went unbeaten through the entire league stage last year, they’ve already lost two matches this time around. Having said that, they’ve also secured a couple of wins which sees them third on the CPL table currently.

Jamaica Tallawahs, on the other hand, have played one game less than the Warriors so far – winning one and losing two.

In fact, the two teams went up against each other on Saturday, with the Warriors coming out on top by 14 runs in a low-scoring encounter.

When it comes to fixtures between the two teams in the past too, the Warriors have the edge – winning 12 out of 19 matches. In their last five face-offs, the team from Guyana have won four. 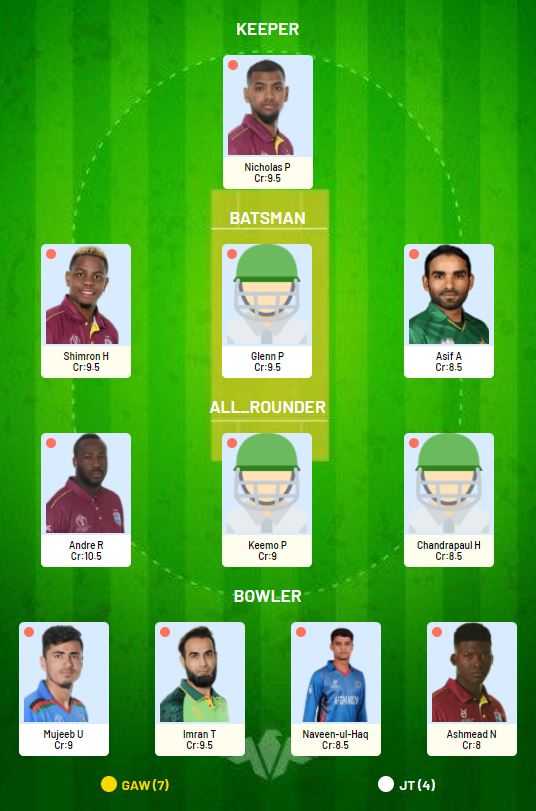 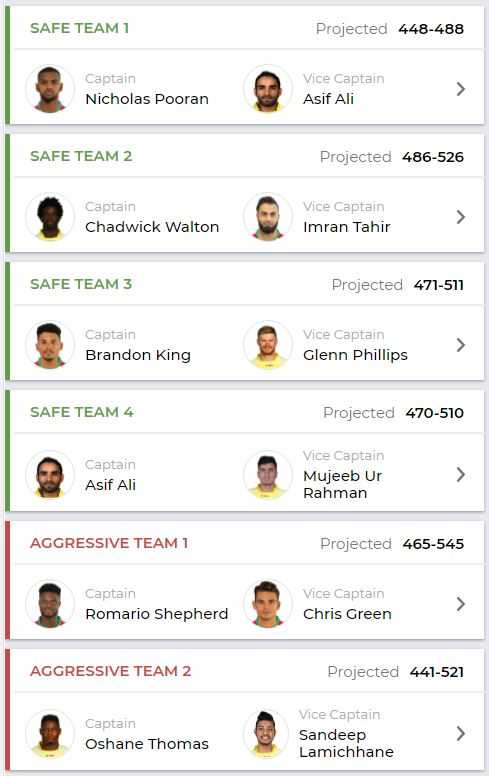 After 10 matches at the Brian Lara Stadium in Tarouba, the CPL action now moves north to Trinidad and Tobago’s capital city of Port of Spain.

Since 2017, Queen’s Park Oval has been slightly friendlier for batters in the CPL when compared to the Brian Lara Stadium, but not by much. During this period, the bowling strike rate here has been 17.7 with only two venues seeing wickets fall at a quicker rate in the tournament than the famous stadium in Port of Spain.

Among the eight grounds that have hosted CPL matches since 2017, Queen’s Park Oval – at 8.2 – has the fourth highest run-rate during the period. Going by this data, we could expect conditions to be slightly more favourable to batsmen than what we’ve witnessed in CPL 2020 so far. 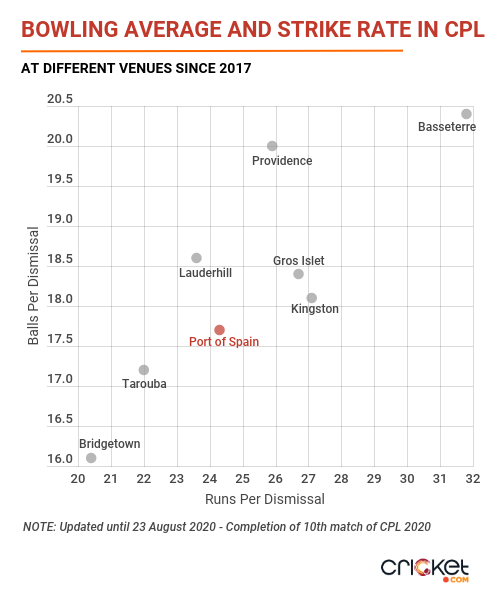 Pacers have taken a wicket every 17.5 deliveries at this venue during the aforementioned period compared to a bowling strike rate of 19.9 for the spinners. The slower bowlers have a better average, though, and that’s mainly thanks to their impressive economy rate.

Combining CPL 2017, ’18 and ’19, spinners had an economy rate of 7 in Port of Spain while fast bowlers conceded 8.8 runs per over which is quite a high number.

In fantasy cricket, though, wickets matter more than a good economy rate so you shouldn’t be against picking pacers in your team. With Andre Russell, Keemo Paul and Carlos Brathwaite playing, you have good options when it comes to pace-bowling allrounders too. 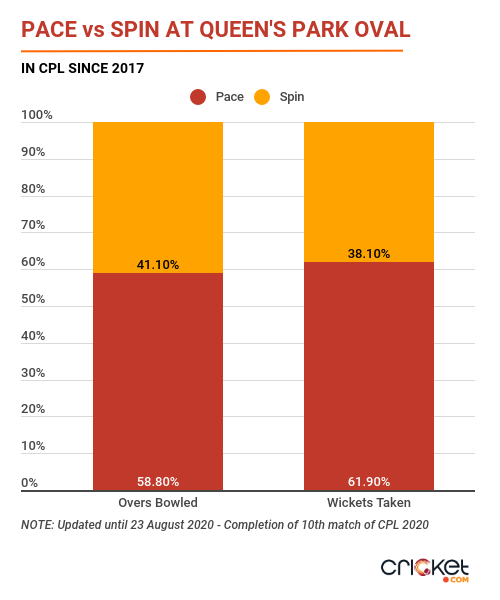 In the past, Andre Russell had often struggled against Imran Tahir. But on Saturday, it was a different story as the Jamaica allrounder scored 24 runs off just 11 deliveries, which included three sixes, against the South African legspinner. If this battle takes place again, it’ll be interesting to see who comes out on top. 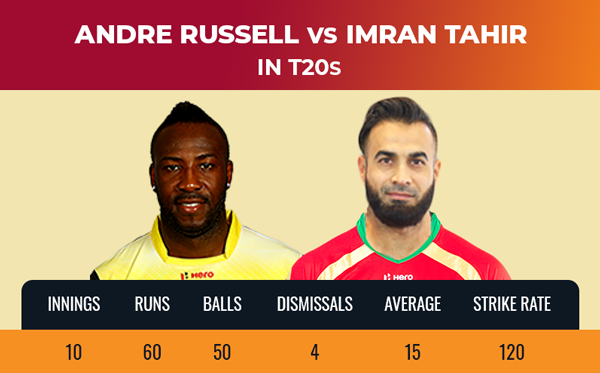 Glenn Phillips has been one of the most prolific batsmen in the CPL since 2018, but he has had his struggles against Chris Green. In this Trans-Tasman clash, the New Zealand batsman has not been able to score runs quickly against the Australian offspinner. Phillips has faced 29 deliveries in T20 cricket from Green and managed just one boundary. 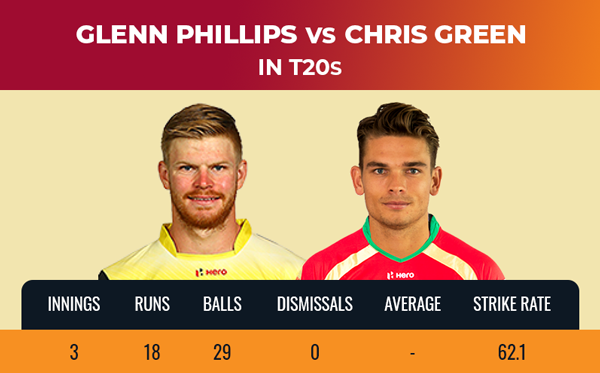 Nine deliveries isn’t a great sample size so we can’t go much by past stats here. Shimron Hetmyer, though, was dismissed by Mujeeb Ur Rahman for a golden duck in Saturday’s match between the two sides. It will be interesting to see how the West Indian batsman counters the Afghanistan spinner on this occasion. 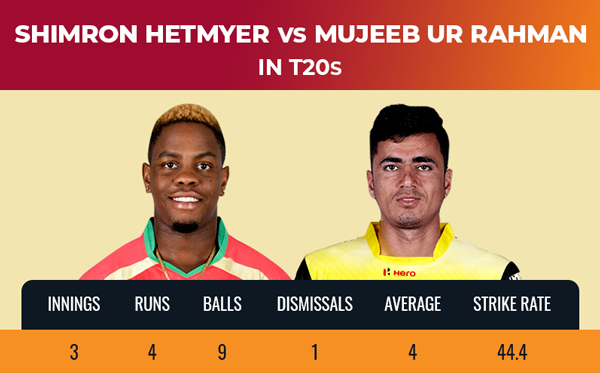 After middling performances with the bat in the Tallawahs’ first two matches, Andre Russell was back to his best with a stunning unbeaten 52 against the Warriors on Saturday. In a match where nearly every batsman struggled, Russell played a sublime knock but it was not enough to get his team home. While he scored 52 from 37 deliveries, rest of Tallawahs’ batsmen managed just 47 from 83 balls. Russell has also picked up two wickets this season thus far.

On Saturday, Imran Tahir endured contrasting fortunes. On one hand, as mentioned earlier, he was hit for 24 runs off 11 balls by Andre Russell. But on the other, he conceded just two runs from the 13 deliveries he bowled to the other Tallawahs batsmen which included a wicket and a maiden over. At the age of 41, Tahir is still going strong. Since the start of 2019, no one has taken more T20 wickets (97) than him.

Mujeeb Ur Rahman bowled excellently in the fixture between these two teams on Saturday – taking three wickets and conceding just 18 runs from his four overs. He has taken at least one wicket in his last eight T20 matches. And among bowlers who’ve bowled five or more overs in CPL 2020, he has the best average (9.3) currently. 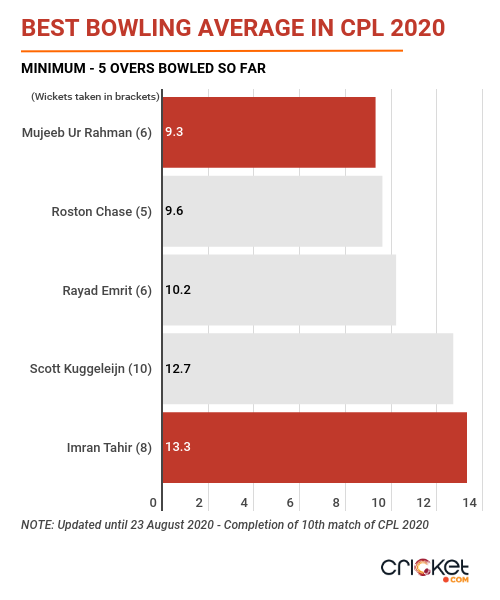 Keemo Paul has six wickets to his name so far in CPL 2020, with four of them coming in one match against St Kitts & Nevis Patriots. His batting could also fetch you some crucial points. While scores of 15 not out and 20 might not look monumental, such knocks tend to be important for your fantasy team.