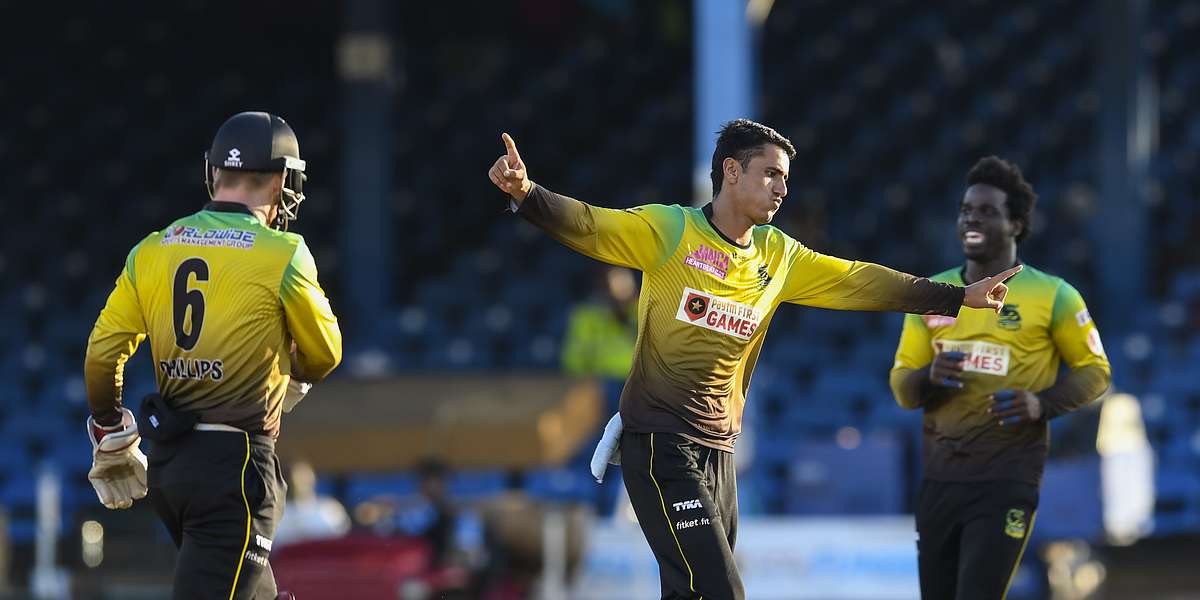 Anirudh Kasargod
Jamaica Tallawahs vs St Kitts Nevis and Patriots, CPL Match 25: Fantasy Preview
Here are a few tips and suggestions that might help you in creating your fantasy team for the 25th match of CPL 2020 between Jamaica and St Kitts in Tarouba

With the tournament heading towards the fag end, it comes down to all kinds of calculations on how a team can get to the play-offs. In the clash between Jamaica Tallawahs and St Kitts and Nevis Patriots in Match 25, the Tallawahs will be in search of a win to carry on. As for the Patriots, with only two points and three matches left, it is nearly done and dusted.

In the reverse fixture, the Tallawahs won by 37 runs defending 148. Since 2018, between the two teams it has generally been a high scoring event. On an average, 190 runs have been scored in the 1st innings. Can we expect another high scoring match? that is to be seen. The Tallawahs have lost 4 matches in the last 5 against the Patriots. 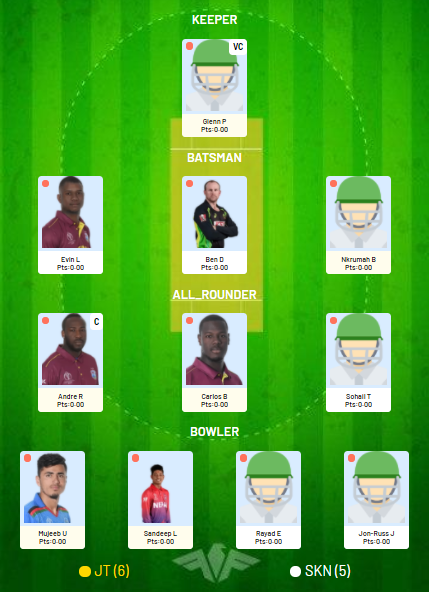 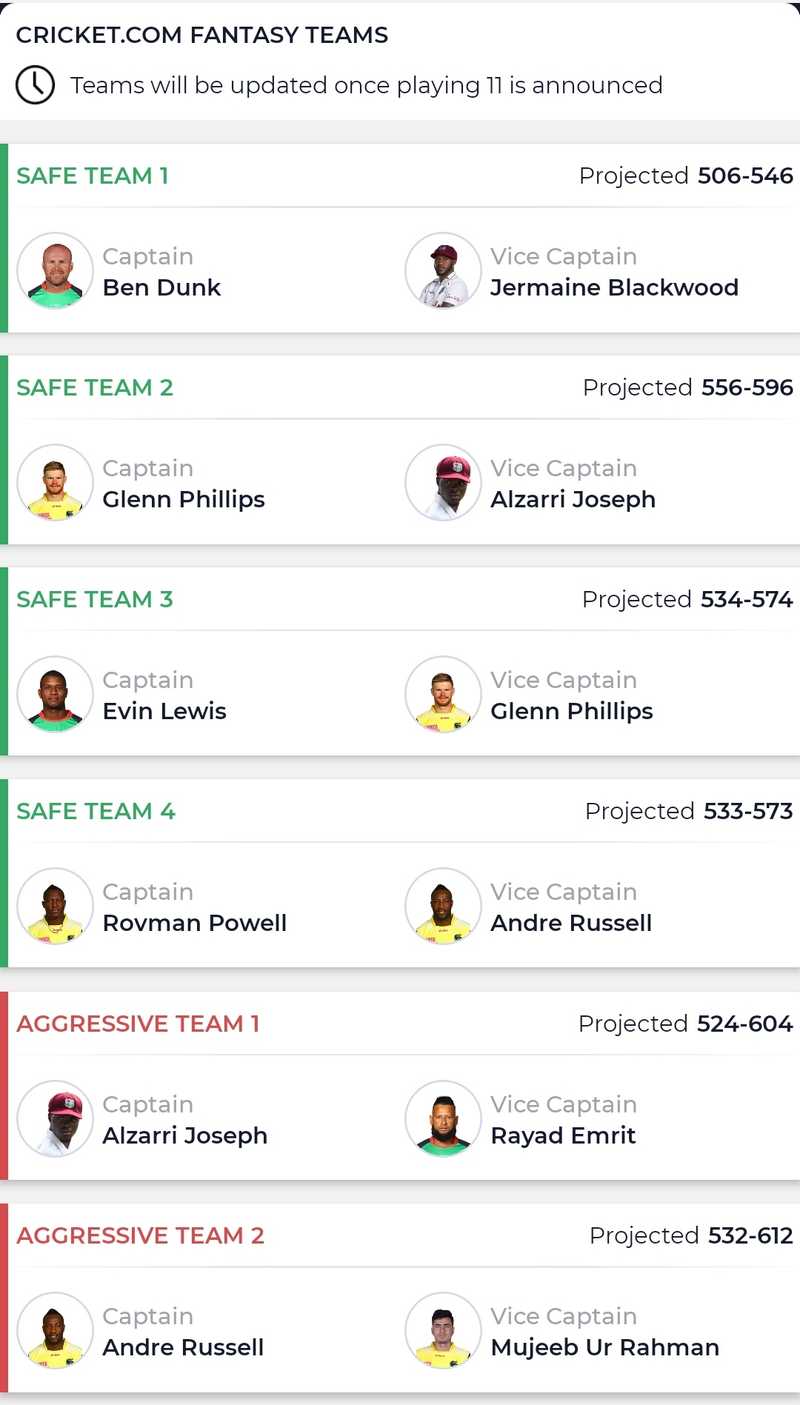 This whole season of CPL has belonged to the bowlers, especially the spinners. The spinners have bagged 127 wickets, which is nearly 53% with a wicket every 18.9 runs and 18.4 balls.

Considerably, the pitch at Tarouba was better for batsmen as compared to Port of Spain this season. On an average 150 runs has been scored this season in Tarouba in the 1st innings. However, for teams batting 2nd the average dips to 144, which indicates the pitch gets slower.

Bowlers have enjoyed early breaks in Tarouba since 2019 in CPL. The balls/dismissal ratio of 17.4 is the second-best among all the venues in this timeframe. Bowling average at the venue as well is on the lower side, which suggests the bowlers have picked up wickets for lesser runs. 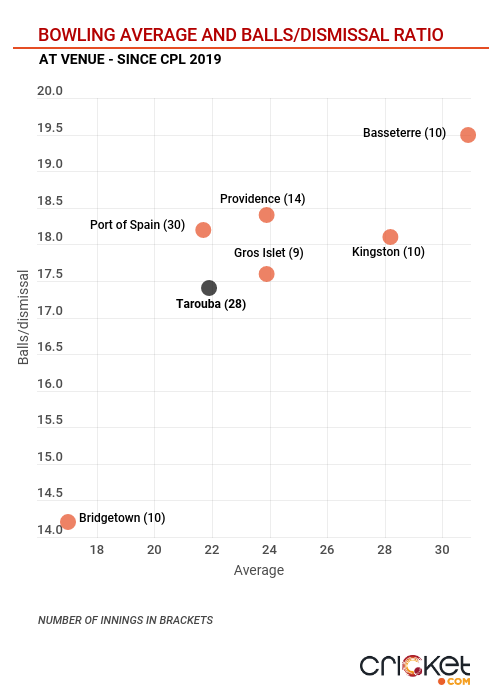 In comparison with Port of Spain, where the spinners dominated, at the Brian Lara Stadium, pacers have bagged the most percentage of wickets this season. However, when in terms of average and balls/dismissal, the spinners are better than pacers. 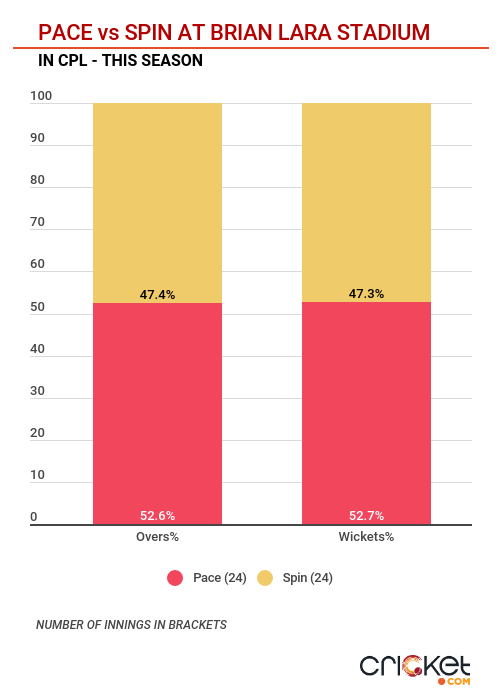 Throughout the tournament this season, the leggies have been able to strike early at the Brain Lara stadium. They have struck every 18.3 balls, which is the best, they have bagged 18% of wickets at the venue. Jamaica have the likes of Sandeep Lamichhane and for the Patriots Imran Khan is their most successful legspinner.

However, the Patriots are a team dependent on their pacers for success. Their pacers have bagged 55% of the wickets, which is the most by a team in this season. Likewise, their spinners have bagged the least (33%).

As for the Tallawahs, spinners have bagged 57% of the wickets and pacers have 43%. They are in equal terms when it comes to picking up wickets. But, the spinners have managed to strike early and concede less than their pacers. They have taken a wicket every 14.9 balls as compared to the pacers 21.0.

Glenn Phillips and Evin Lewis are among the must-have batsmen. Dre Russ and Carlos Brathwaite would be priority picks among the allrounders. Mujeeb Ur Rahman, Sandeep Lamichhane are sure-shot selections among the spinners. The likes of Imran Khan, Ish Sodhi and Jon-Russ Jaggesar are the other choices. The Patriots captain himself has had a good season, which makes him one of the top picks among fast bowlers.

The Patriots captain has taken a liking towards his counterpart. In the 4 innings Powell has faced Emrit, he has got out to him thrice at an average of just 1.7 and a strike rate of 41.7. 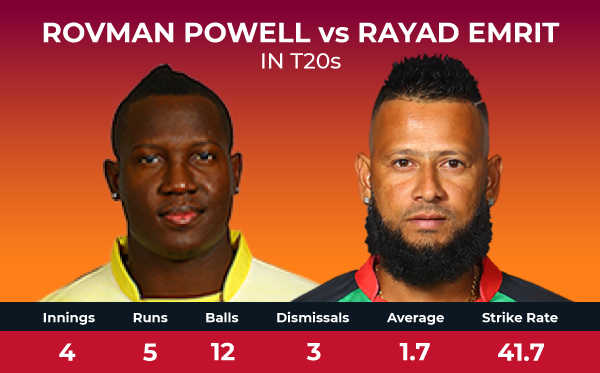 Tanvir is a canny bowler and most of the batsmen do struggle against him. But, it is not the case with Dre Russ. In the 6 innings he has scored 34 runs at a strike rate of 170 with one dismissal against him. 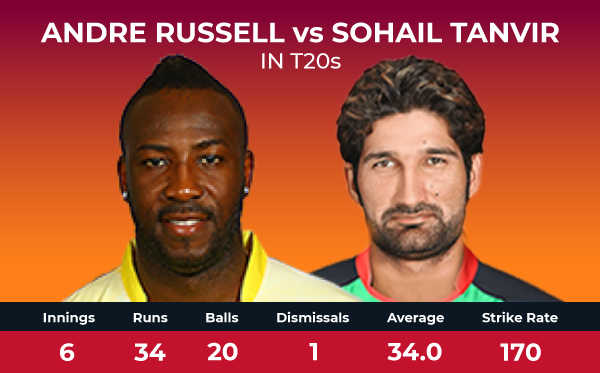 The best batsman of this tournament will be enthralled by the record he has against the Patriots' best bowler this season. Phillips in the 5 innings against Emrit has scored at a strike rate of 190 without being dismissed. 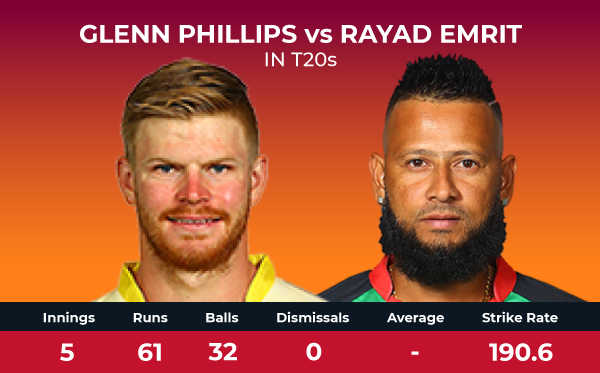 The bulky young quick, with his extra pace has certainly troubled Lewis in T20s. In the 5 innings he has dismissed the left-handed opener thrice at an average of 9.3. 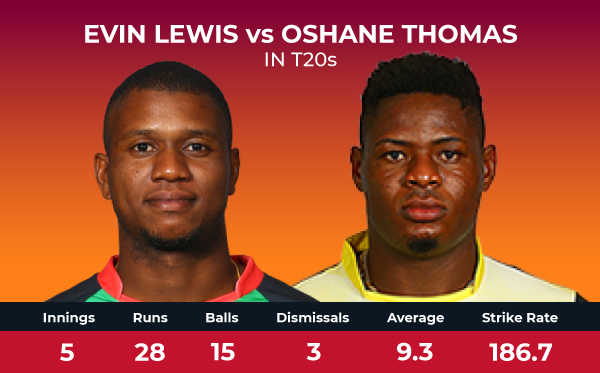 ANDRE RUSSELL: The allrounder has been Tallawahs' second-best batsman this season. Though both of his half-centuries have come in a losing cause, his batting is an essential skill, especially when he is not bowling. He has scored 166 runs at an average of 83.0 and a strike rate of 135, the strike rate may not be Dre Russ level but those have been vital runs.

His average of 83.0 is the best among batsmen who have scored over 100 runs this season. The Jamaican performer is a certain captaincy material for the fantasy team.

Our Criclytics player projector predicts, he would score 33-44 runs in Match 25 against the Patriots.

GLENN PHILLIPS: The Kiwi wicketkeeper-bat has been the most successful batsmen this season with 248 runs in 7 innings. With an average of 41.3, he has scored runs at a strike rate of 128.5. His average is fourth-best among batsmen with 100 runs.

The good part about his batting is, he hasn’t been bogged down during the middle overs (7-15). He has scored over 100 runs at an amazing strike rate of 145, which is the best among all batsmen who have faced over 50 balls during this phase. With batsmen struggling to score in this phase, Phillips has done so with ease, which is why he is one of the X-factors.

Our Criclytics player projector predicts, he would score 25-42 runs in Match 25 against the Patriots.

RAYAD EMRIT: The Patriots skipper, Emrit leads their bowling attack with 10 wickets to his name this season. However, the pacer has been lacking support. He has bagged those 10 wickets at a balls/dismissal ratio of 15.0. 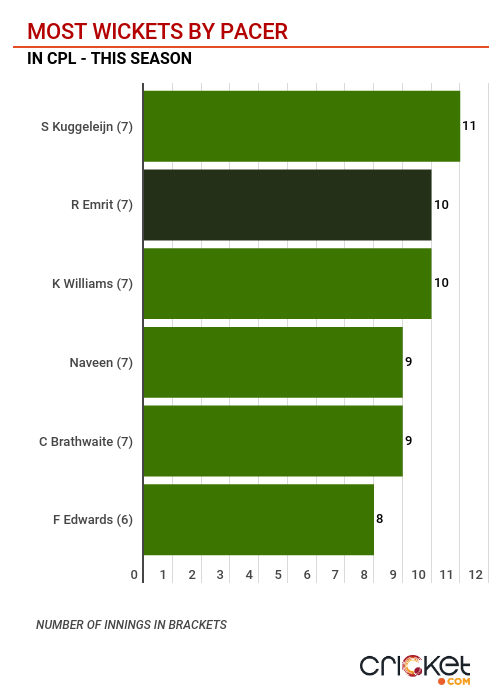 His 10 wickets are the second joint-most alongside Kesrick Williams among pacers, Emrit though has a better average than Williams.

Our Criclytics player projector predicts, he would pick 0-3 wickets in Match 25 against the Tallawahs.

MUJEEB UR RAHMAN: The young kid from Afghanistan has almost been an unplayable bowler this season. Initially they gave him wickets in search of scoring runs, but now, most of them have surrendered and are very cautious with their approach against him. The 13 wickets every 12.9 balls and 9.2 runs show the level that he has been operating at.

Our Criclytics player projector predicts, he would bag 0-3 wickets in Match 25 against the Patriots.