Rishabh Pant and Ambati Rayudu were excluded from India’s 15-member World Cup squad with KL Rahul, Vijay Shankar, Ravindra Jadeja and Dinesh Karthik occupying the four spots for which there was a lengthy debate.

Rayudu who was a regular in the Indian team recently, found himself out of favor after his form tapered off. With KL Rahul having a fantastic IPL, the selectors went in for the Karnataka batsman. Ravindra Jadeja was picked as the third spinner with the selectors feeling his all-round skill added more value. Dinesh Karthik’s experience saw him ousting Pant for the second keeper’s role.

The BCCI secretary Amitabh Choudhury and Chief Selector MSK Prasad, in consultation with skipper Virat Kohli, announced the squad in Mumbai on Monday.

Prasad made not bones about the fact that Karthik’s wicket-keeping skills handed him the upper hand but that, by no means, made him an automatic selection.

“Wicket-keeping skills matter. That is why we have gone with Dinesh Karthik and not Rishabh Pant,” said former India wicket-keeper Prasad.

“But that does not mean Dinesh is an automatic starter in the XI. He is a back-up ’keeper and will be brought in in case MS (Dhoni) suffers an injury,” he added.

Rayudu has been a regular starter in the recent past but with no settled No 4, India tried a host of players in order to sort the conundrum, which eventually worked in favour of Shankar.

“We did give Rayudu quite a few chances but Vijay Shankar is someone that gives us three dimensions. He can bat, bowl in overcast conditions, and is also a good fielder. We are looking at slotting him in at number four,” divulged Prasad.

Reports suggested Kohli reached the BCCI headquarters by 2 pm and entered through the backdoor to avoid the media waiting at the entrance.

One thing to note here, is that, this is a provisional squad and the BCCI can make changes until May 23 without the consent of the ICC. 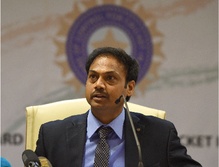