Malinga named in 15-member squad but Chandimal misses out

In a squad full of surprises, the Sri Lankan selectors picked opening batsman Dimuth Karunaratne as captain and didn’t choose a host of established names which includes ex-captain Dinesh Chandimal. Alongside Chandimal, others to miss out on the mega event were incumbent wicketkeeper-batsman Niroshan Dickwella, experienced opener Upul Tharanga, attacking opening batsman Danushka Gunathilaka and mystery spinner Akila Dananjaya. Dickwella and Dananjaya were dropped due to poor form as the duo didn’t make use of their opportunities on recent tours.

Chandimal who was captain of the ODI side as recently as October 2018, found himself sidelined because of his poor form with the bat while Karunaratne was given the captaincy duties after the island nation’s historic Test series win in South Africa - the first-ever for an Asian side there. Karunaratne though hasn’t played an ODI since March 2015 and has just featured in 17 ODIs so far in his short career. The move to name him as captain is certain to raise a few eyebrows for sure especially with the ongoing musical chairs with respect to the Sri Lankan captaincy.

Commenting on the captaincy decision chief selector Ashantha de Mel said: “We saw in South Africa how Dimuth was able to unite the team, and have everyone playing together. That was what was important to us at this time. I spoke to Malinga yesterday and explained to him that as selectors we didn’t have any issues with his captaincy, but that although he was playing well, the other 10 players weren’t behind him. That’s not his fault, but that was the situation we had.”

On Sri Lanka’s last two tours of New Zealand and South Africa, it was Lasith Malinga who was captain but he wasn’t given the role even though he is set to feature in his fourth World Cup. Angelo Mathews - the experienced allrounder - makes a comeback after not featuring in his side’s last three ODI series; against England, New Zealand and South Africa respectively due to injury. His return will provide the much-needed solidity in the middle-order while his experience in foreign conditions will help a largely inexperienced squad.

The inclusions of Lahiru Thirimanne, Milinda Siriwardana, Jeevan Mendis and Jeffrey Vandersay were quite surprising as the quartet haven’t featured in an ODI since at least 2017. While Thirimanne’s tight technique and experience will be valuable, he is expected to partner Karunaratne at the top of the order, the others have been picked on recent performances in the Super Four Provincial Tournament which served as a selection trial for the World Cup. The squad has 21-year-old opening batsman Avishka Fernando as well, who debuted in South Africa but he is expected to warm the benches. Kusal Perera will don the gloves even though there are other options who can keep if needed.

The middle-order will consist of talented duo Kusal Mendis and Dhananjaya de Silva with Mathews providing the class and guidance. Sri Lanka have four allrounders in the squad - a pair of pace and spin options to choose from - in Thisara Perera and Isuru Udana with Jeevan Mendis and Milinda Siriwardana the spinning options. Lasith Malinga will spearhead the pace-bowling department and will have Suranga Lakmal and the injury-prone but talented Nuwan Pradeep for company. Only one specialist spinner has been picked in the form of leg-spinner Jeffrey Vandersay with the selectors discarding Akila Dananjaya.

The selectors have named four standbys in Oshada Fernando, Kasun Rajitha, Wanindu Hasaranga and Angelo Perera who will travel with the team in case they are required to fill in the event of an injury or other related issues. Sri Lanka  have two ODIs against Scotland away in May and also play two warm-up games against South Africa and Australia. They will begin their World Cup campaign on June 1st against New Zealand in Cardiff. 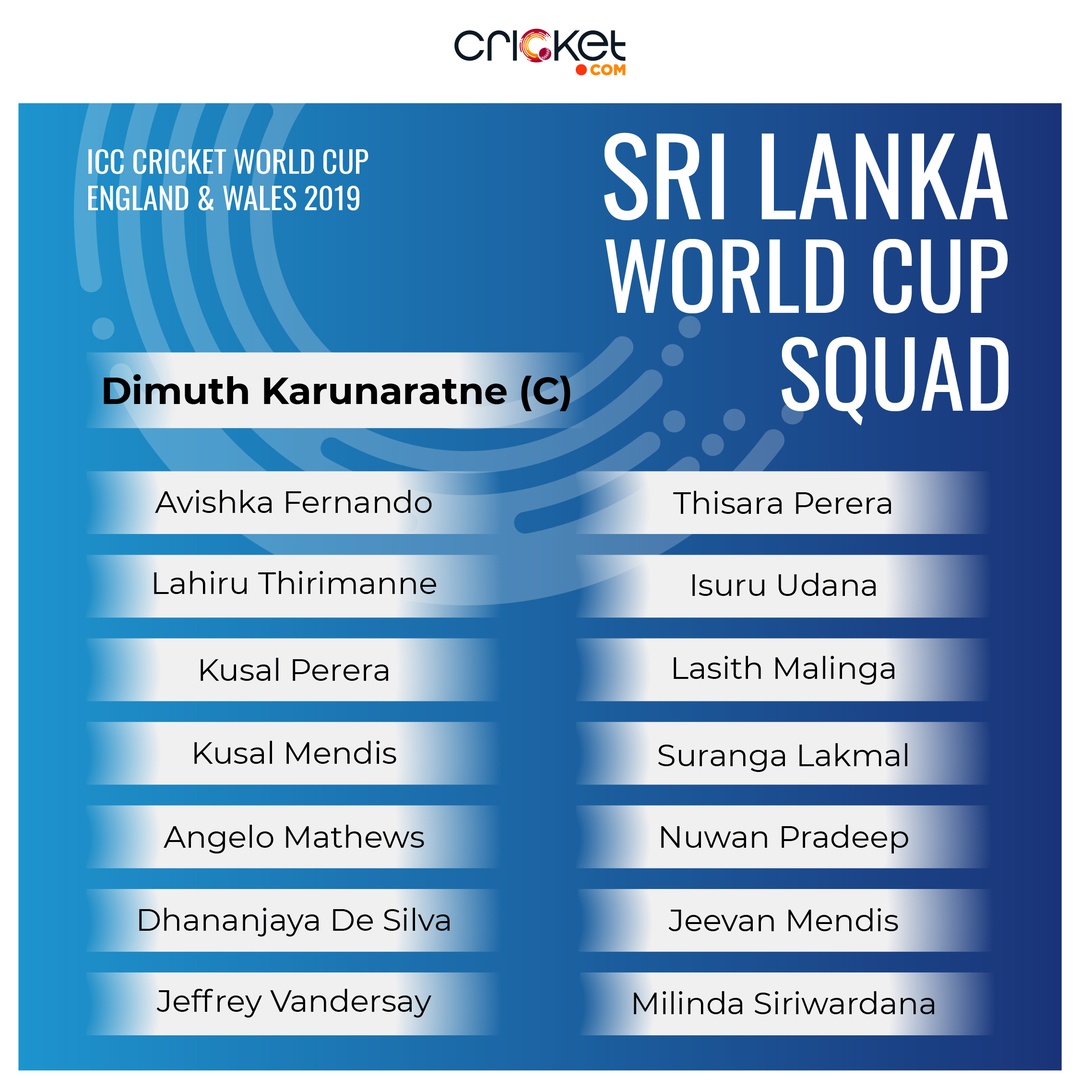