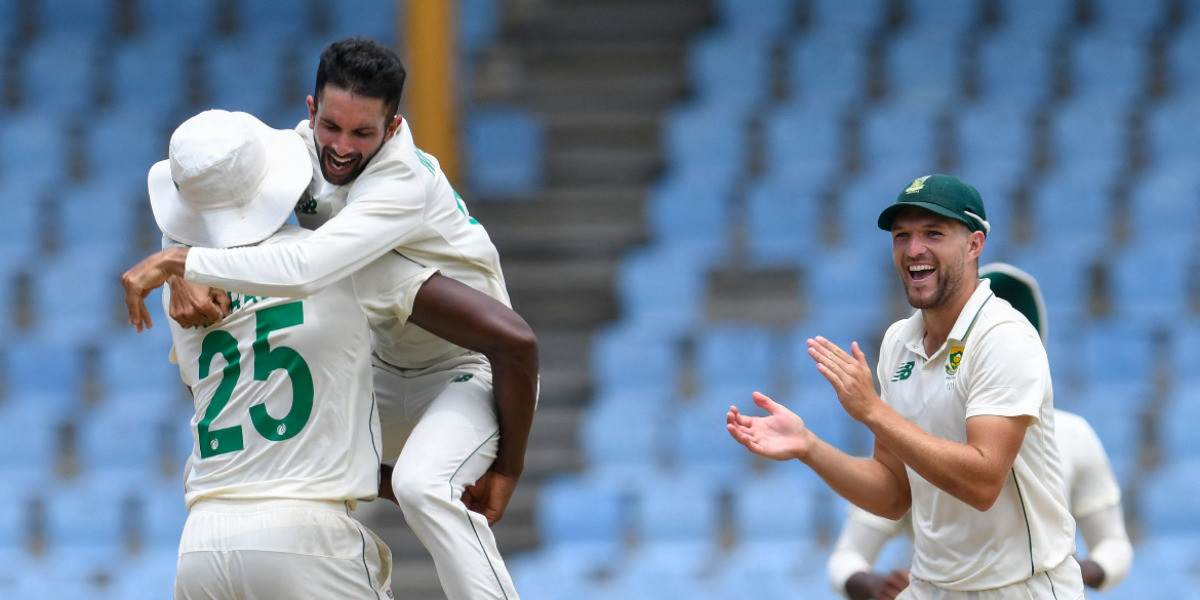 South African spinner Keshav Maharaj bagged a hat-trick on Monday to hand the Proteas a 158-run win against the West Indies in the second Test at the Gros Islet. Maharaj became only the second South African to bag a Test hat-trick - the previous South African to take a hat-trick in Tests was Geoff Griffin against England at Lord’s in 1960. Maharaj finished with figures of 5/36, his seventh five-wicket haul, while pacer Kagiso Rabada picked up three to bowl West Indies out for 165 on the penultimate day of the second Test. The Proteas clinched the series 2-0.

Chasing 324, the Windies were scrambling at 107/3 after 36 overs when Maharaj came into bowl his 9th over. The left-arm tweaker pitched one up and Kieran Powell who was batting on 51, rightly so, went for a slog sweep. Powell timed it decently but picked out the only man in the deep. Anrich Nortje at deep mid-wicket did not have to move an inch.

Jason Holder (0) was Maharaj's next victim. The former West Indies skipper nudged one to the Keegan Pietersen at short leg. Joshua Da Silva (0) tickled one down the leg and was taken spectacularly by Wiaan Mulder at leg-slip. Maharaj thus became the first South African spinner to take a Test hat-trick, the first spinner to register a hat-trick against the Windies and also the first tweaker to bag a hat-trick in West Indies.

A Test hat-trick for Keshav Maharaj! South Africa have reduced West Indies to 109/6 at lunch on day four.

"Powell was looking to come at me and I just thought about putting the ball in the right area and it found Anrich on the boundary".  "The second one to Jason, I was trying to bowl a straight delivery and luckily it got an inside edge. The hat-trick ball I had so many things going through my head as to where to put the ball. In the end, I just bowled it normally and Joshua followed it down the leg and full credit to Wiaan for a great catch.  "I didn’t know what to do (to celebrate), I thought about doing a slide but ended up stopping dead in my tracks. There was too much excitement and adrenalin in me," he added.

The Proteas with this 2-0 win against the Windies complete their first away series win in more than four years. They beat New Zealand in March 2017. Quinton de Kock for his 237 runs in three innings was adjudged the player of the series.