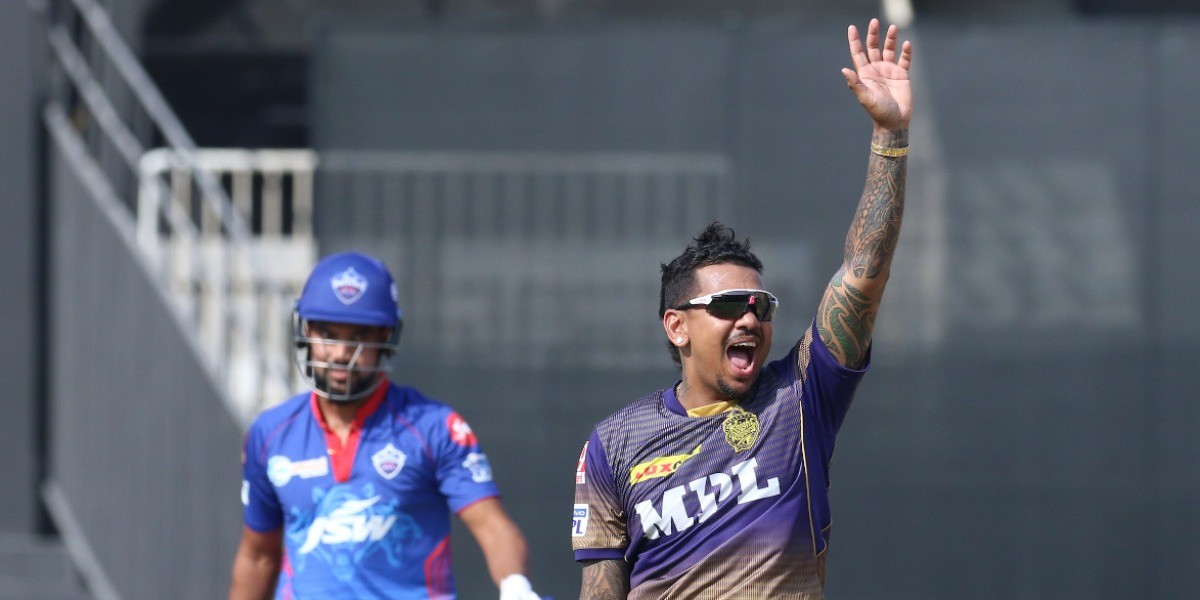 Kolkata Knight Riders are on a roll. Barring Chennai, whom they pushed to the last ball, they have now defeated each of the three team which were in the top half of the points table when the season resumed in UAE. They have completed the treble with a 3-wicket win over Delhi Capitals. It did not come as convincingly as their wins against Bangalore and Mumbai. They jittered on their way to a below par target of 128 but found enough impetus to get over the line.

However, they were on money with the ball. On a slow track, Kolkata executed their plans to perfection which were built largely around keeping the pace off the ball. Sunil Narine was at top of his game, choking Delhi with figures of 4-0-18-2. Varun Chakravarthy did not pick a wicket but kept it tight with a four-over spell at an economy of 6 runs per over. Lockie Ferguson was brilliant as ever, conceding only 10 runs in his two overs while accounting for both openers. Tim Southee, making his debut for the franchise did a fairly good job at 2 for 29 in four overs.

Sandeep Warrier was the only bowler who missed his mark. His fullish deliveries made life easy for Shikhar Dhawan. Ferguson was off the ground during the last phase of Delhi’s innings. With runs hard to come by, this was Delhi’s only opening to put some runs on the board. But Venkatesh Iyer, Kolkata’s star with the bat in the second half stepped up to do a job with the ball. He bowled his full four-over quota, filling in for both Warrier and Ferguson, for 2 for 29. On the scorecard, his figures were as good as those of Southee. But the wickets he bagged were of Shimron Hetmyer and Axar Patel, two players with impactful batting prowess.

This is where Delhi would be disappointed with their batting, letting Iyer bowl a full quota with two of his overs at the death. 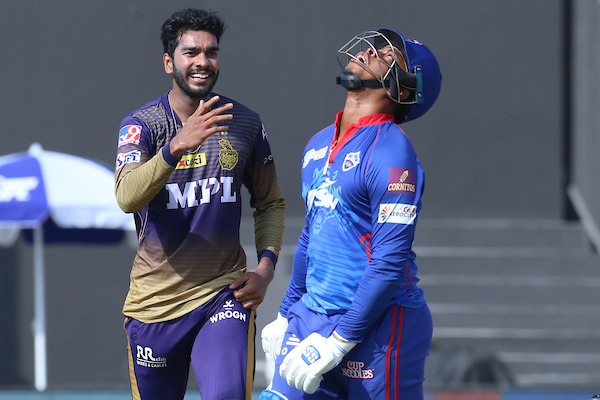 At the toss, Delhi skipper Rishabh Pant was happy to bat first. But it can get quite tricky to set targets on such tracks. In the absence of the injured Prithvi Shaw, Dhawan had a new opening partner in Steve Smith. With the aggressor missing, Dhawan showed the intent. He was severe on anything loose as usual, which were offered in plenty by Warrier, but also charged down the track consistently. He smacked Southee through the covers for four in what was the shot of Delhi’s innings. Next over, he went for one shots too many when he was held at point off the bowling of Ferguson.

Delhi’s innings went downhill from thereon. Narine bowled a peach in his first over to castle Shreyas Iyer for 1 runs dried up. The sluggish nature of the track began to show in Kolkata’s efficient plans. Smith did try to up the ante with back to back boundaries in the 10th over but soon fell to his inability to slog across the line. It was an unnecessary shot as he appeared to have adjusted to the slow pace of the pitch. But as soon as pace was offered, he went in search of overambitious strokes, losing his wicket for 39 off 34 balls to Ferguson.

Pant batted for over 10 overs but couldn’t build any momentum to his innings either. He was run out in the last overs in a failed attempt to get to the batting end, for 39 off 36 balls. Delhi did not hit a single six in their innings.

Defending only 127, instead of 155 like the other day against Rajasthan, Delhi bowlers had no cushion for mistakes. They also needed to build early pressure. None of those things happened. In the first half of Kolkata’s innings, they bowled only two overs of pace with an exaggerated reliance on spin. Kagiso Rabada, bowling his first in the 11th opened the game with a wicket maiden. Ravichandran Ashwin built on it by handing a second ball duck to Eoin Morgan. For the first time, it actually felt as if Delhi can pull of another fruitful bowling display. 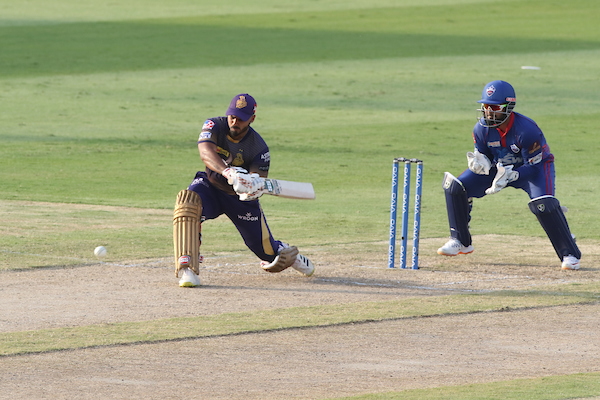 Ultimately, their over-reliance on spin came to bite them. The third over of Lalit Yadav, bowled with the intention to exploit his match-up against the left-hander Nitish Rana, backfired. He was carted for 19 runs, including two sixes by Rana. A thick outside edge by Karthik for four added insult to the the injury. Rabada leaking 21 off the 16th over ended Delhi’s chances.

19 off those 21 in Rabada’s over came off the willow of Narine, who piled on his brilliance show with the ball. Delhi lost with 10 balls to spare and the two costly overs cost them the match. The third over from Lalit was probably pushing it a bit given Avesh Khan and Anrich Nortje, two of Delhi most effective owlers this season, did not complete their quota.

While Delhi stay at the second spot, the win betters Kolkata’s chances of a Play-off spot, lifting them to 10 points with three matches to go, all of them against underachievers of the season.