After a promising start where they won 4 out of their 5 opening matches, KKR's season went downhill after six consecutive loss their worst record since 2009. With three games to go they find themselves out of playoff contention

A contrasting first and second half of the tournament leaves two-time champions Kolkata Knight Riders in a position where they need to win every game to keep their playoff hopes alive. In the opening half of the tournament, KKR won four out of their five matches and seemed certain to make the last four. However, their fortunes took a u-turn as they lost their last five matches on the bounce – KKR’s worst record since 2014.

Three of the five defeats came at home, at the Eden Gardens where they lost against Royal Challengers Bangalore, Delhi Capitals and Chennai Super Kings. KKR has a spin-heavy attack that relies on choking the opposition, with Kuldeep, Chawla and Narine operating in the middle overs.

This bias to spin is in large part due to losing their best pacers, Shivam Mavi, Kamlesh Nagarkoti and the South African Anrich Nortje, through injuries. In 2018, the KKR spinners were the best in the middle phase in terms of taking wickets. However, this year the Eden wicket has played true, without much assistance for spin, and this has upset the balance of the side’s bowling resources. 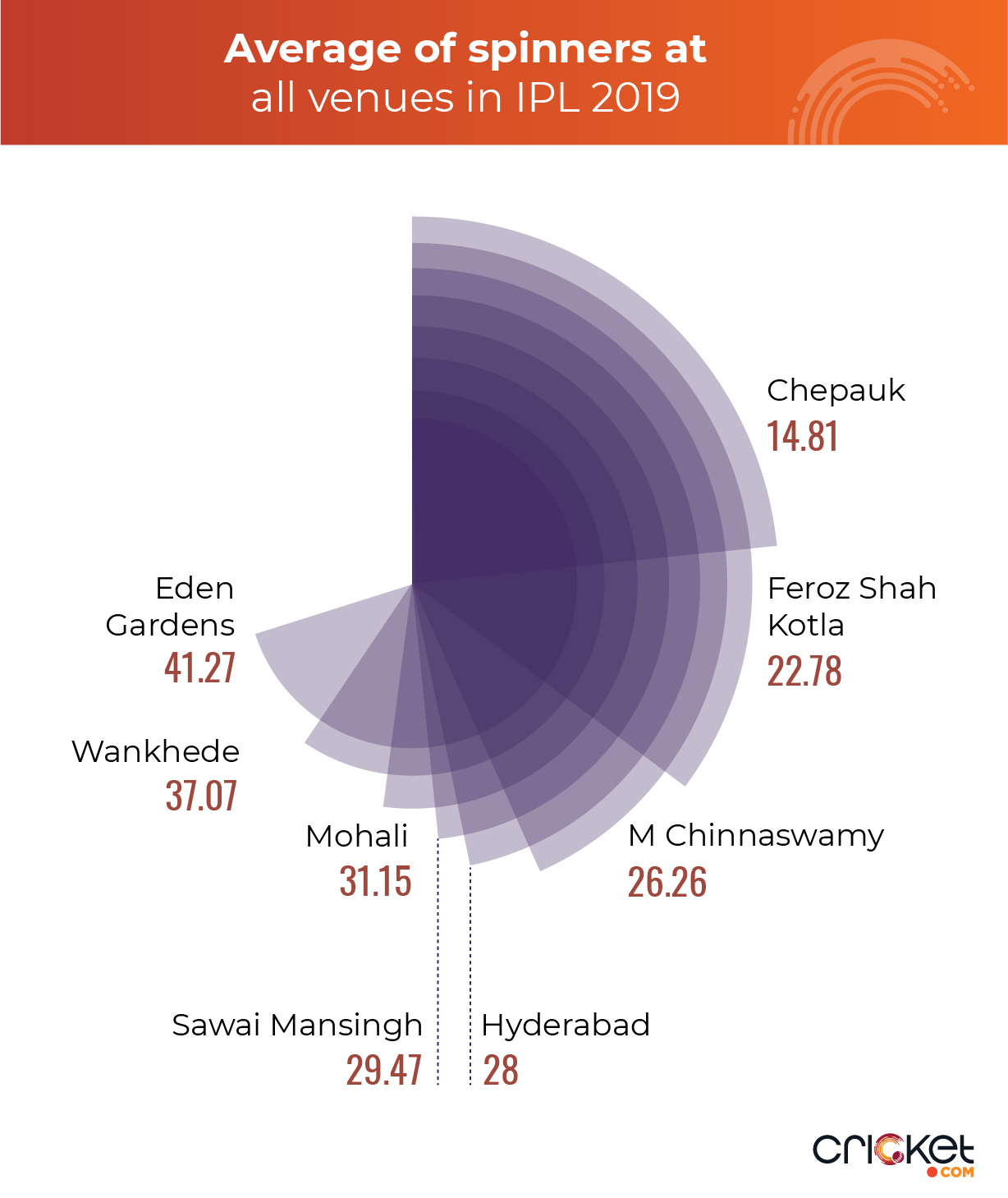 It is not fair though to put all the blame on the ground – the KKR spin trio signally failed even on spin-friendly wickets such as the Kotla, Chepauk, Jaipur, Hyderabad and Bangalore. In fact, they have the worst strike rate after RR among all teams in away venues. Kuldeep, the best spinner for KKR last year, hasn’t picked a wicket in four consecutive games, and that pressure has told on the others. 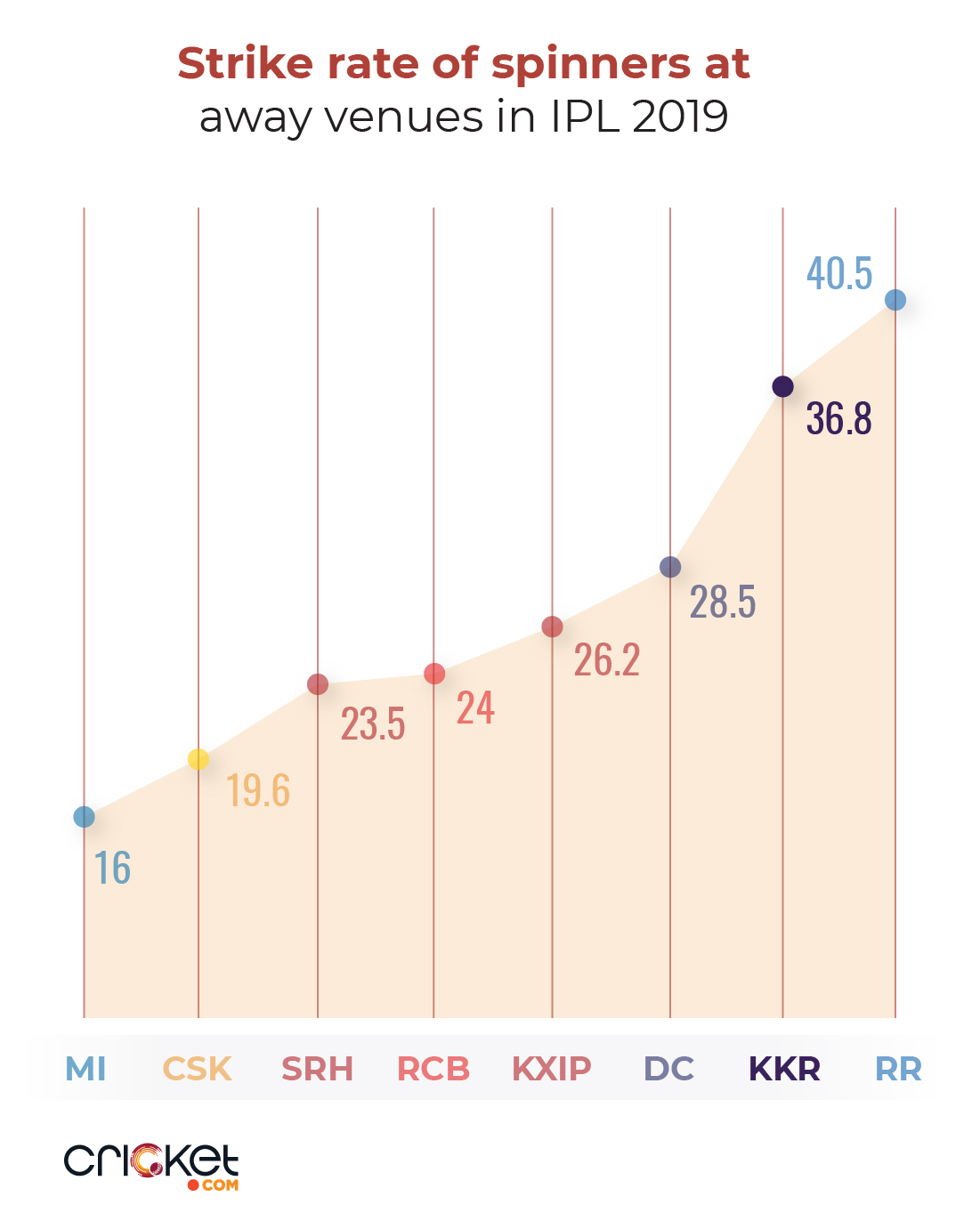 KKR’s deficiencies in the spin department are accentuated by their pace attack, such as it is. Prasidh Krishna looks impressive, but has a mere two wickets in nine games, in which he has bowled 34 overs. Lockie Ferguson is hardly better, his five games and 17 overs producing just two wickets. Harry Gurney is a containing bowler, which reflects in his good economy rate of 8.75 – but when it comes to striking, he has just 4 wickets in 16 overs across five matches. Ironically, Andre Russell is their best quick, striking at 15.42 for his seven wickets in eight games; a case could be made that he is underutilized, since he has bowled only 16 overs.

The KKR pacers tend to leak too many runs up front, making the task of the spinners even more difficult. In this season, the KKR pacers have conceded 8.33 runs per over; only KXIP (8.4) and RCB (8.55) have a worse record. 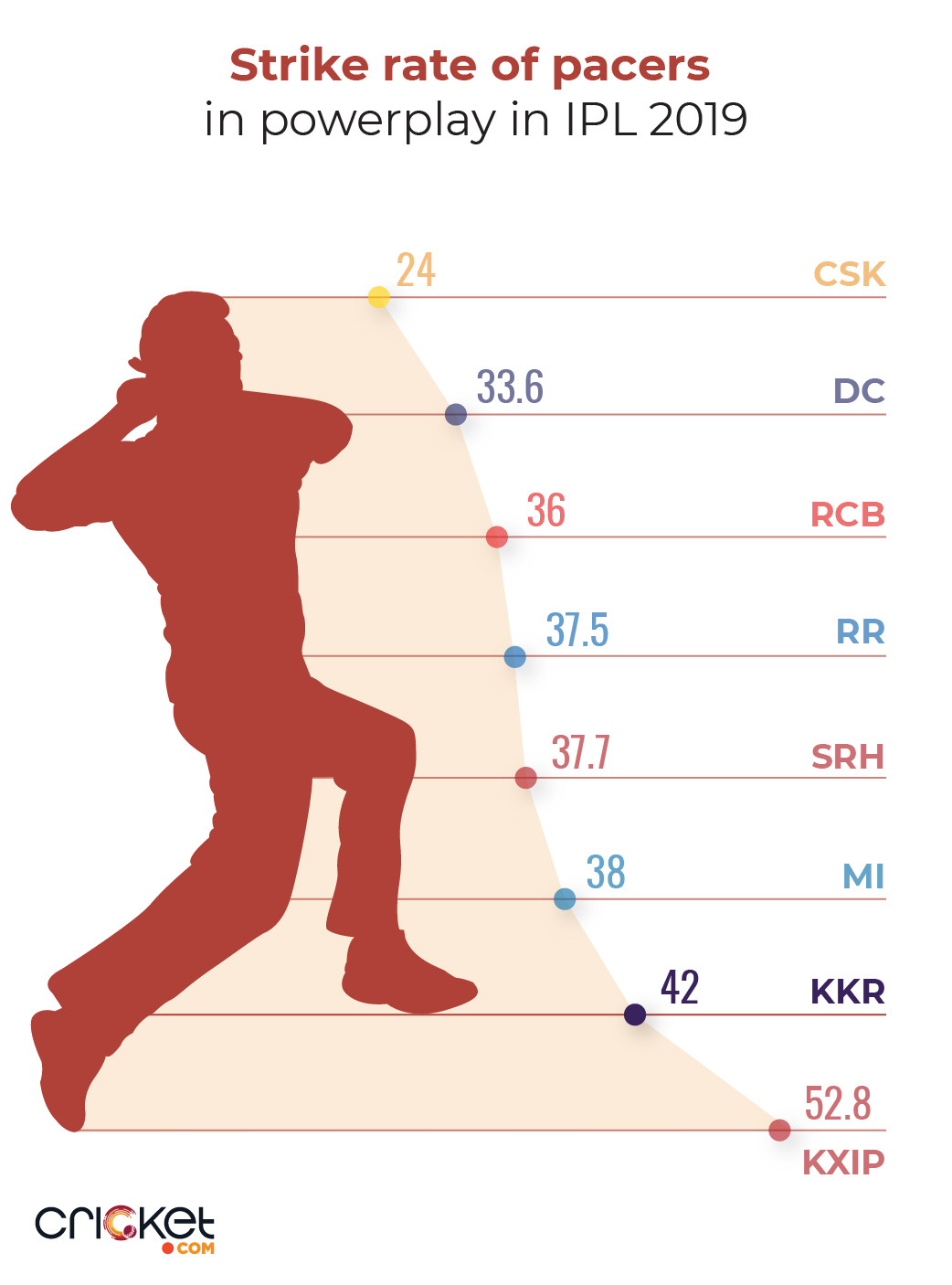 In sum, the pacers leak runs and don’t take wickets at the top; the spinners don’t strike hard and often in the middle phase – which means that opposition teams are well placed to go after the bowling at the death.

The KKR pacers have the worst economy rate during death overs, conceding 12.16 runs per over, and picking the least number of wickets (5) in the death phase of all teams.

In 2019, KKR has had to depend on its batsmen to score big and cover for a weak bowling attack. The opening duo of Lynn and Narine is arguably the most destructive opening pair in the tournament, scoring at 10.88 runs per over in the PPs, but once they get out, the rest of the batting tends to crumble in the quest for quick runs. In fact, KKR have lost the most number of wickets (18) in powerplay overs this season, behind only CSK (21). 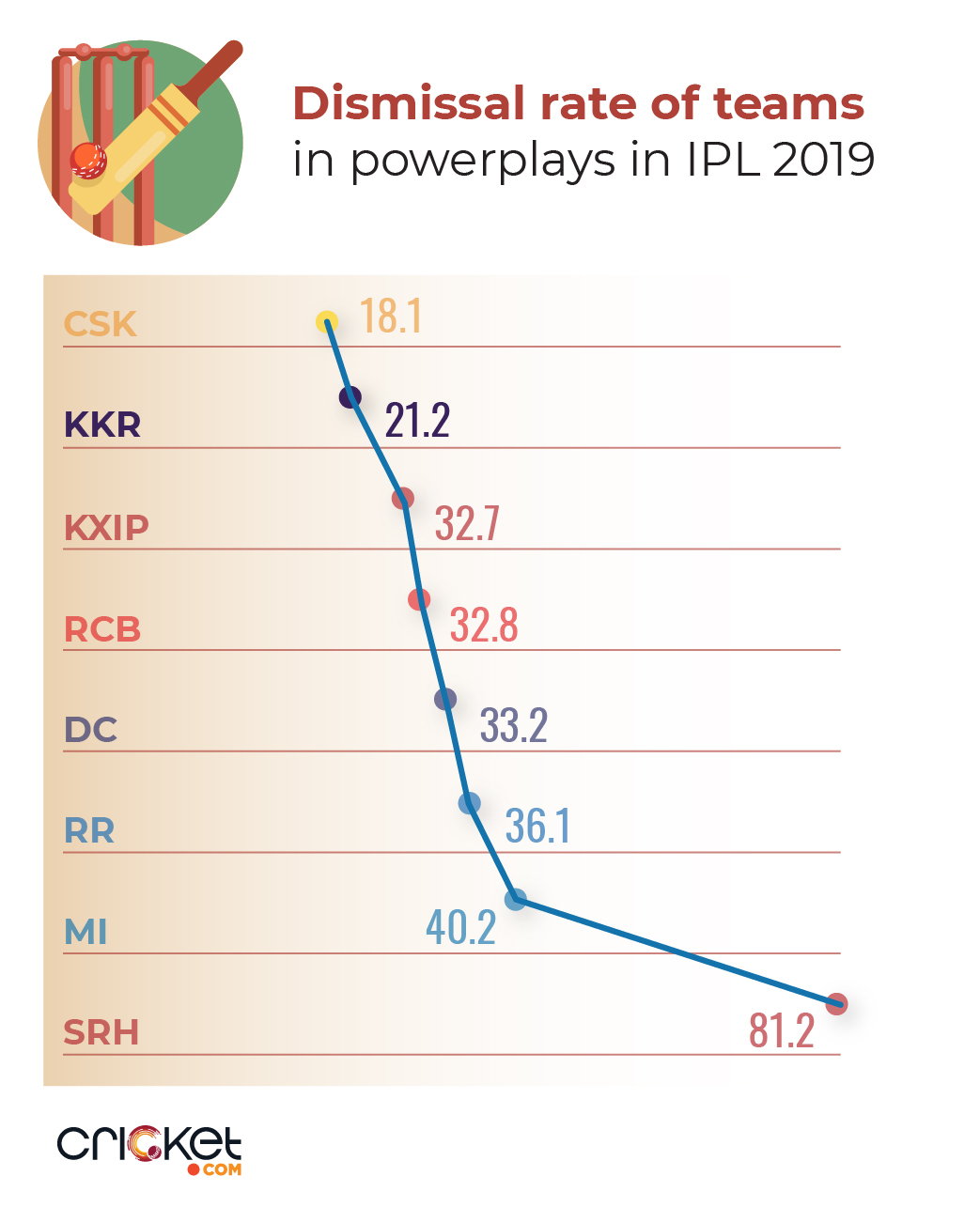 An illustrative example is KKR’s recent game against SRH. KKR were 42/0 in just 2.4 overs but as soon as Narine got out, they slipped from 42-1 to 73-4 in a span of just six overs. Another instance: KKR vs CSK, Match 29 -- KKR were comfortably placed at 79/2 at the halfway mark but in the back end of their innings,  they could only manage 82 runs at the cost of losing 6 wickets.

Only Nitish Rana and Andre Russell have been consistent in the middle order, combining to score 41.48 percent of KKR’s total runs this season. Against that, Shubman Gill, Robin Uthappa and Dinesh Karthik have scored only 24 % of the team’s runs. 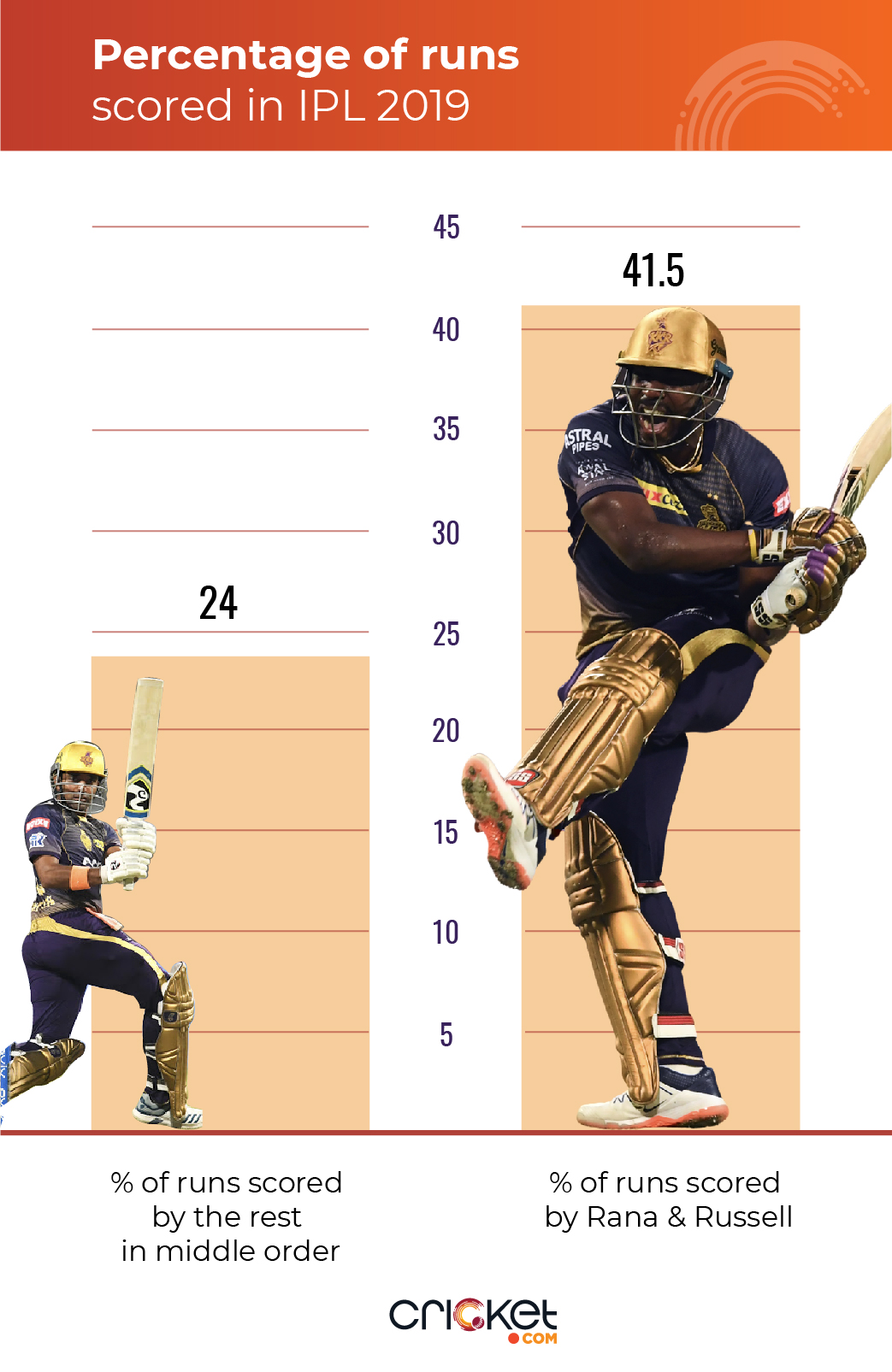 He nearly pulled off a Houdini act against RCB. KKR were chasing 214 for victory and had lost four wickets inside 10 overs. When Andre Russell came to the crease in the 12th over, another 133 runs were required. Russell walloped 66 off just 25 balls, but his best efforts were in vain as KKR fell short by just ten.

KKR has wasted him at number 7. If Russell had come a little earlier, he could have had the space to pull off the chase. After the match, he mentioned in a press conference: “I believe that (I should have batted at No 4)... Honestly, I think sometimes you have to flexible as a team. Looking at the make-up of our team, I would not mind going to bat at No 4.

“I think me going to bat early would definitely be a good thing for KKR. But with our make-up of the team, that’s a good answer,” Russell, who has scripted some near-impossible wins for his team this season, said.

KKR won three matches while chasing and on two occasion they were in a spot of bother until Russell came to the rescue. In their opening game against SRH, KKR were chasing a daunting 182. They were going well thanks to a composed innings of 68 from Rana, but once he got out in the 16th over KKR required another 64 in 26 balls. Russell walked out, biffed 49 off just 19 balls, and won his side the game with two balls to spare.

In their second away game at the Chinnaswamy Stadium, KKR were chasing another huge target of 203. The batsmen started off in great fashion and at the half way mark they were comfortably placed at 108/3. By the end of 16th over however the situation worsened as KKR lost half the side, with another 50 required in 3 overs. Russell again, with a 48 run blitz off just 13 balls that gave KKR the victory with five balls to spare.

These factors, combined, explain why KKR, which started the season tipped to be one of the top four, is currently languishing. Some factors, such as the loss of the first choice quick bowlers to injury, are beyond its control – but even so, the KKR management has to accept that its inability to use its resources to optimum is in large part responsible for its lowly sixth place on the table, with just three games left to play.