Knight Riders, Capitals look to get back to winning ways 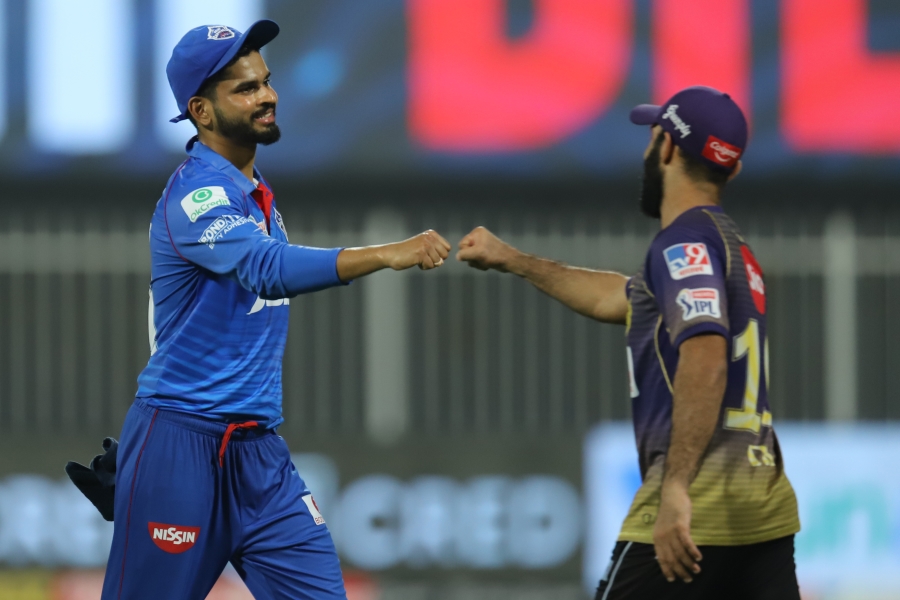 Knight Riders, Capitals look to get back to winning ways

There is plenty to play for as KKR and DC face off at the Sheikh Zayed Stadium, Abu Dhabi on Saturday (24 October 2020)

Both Kolkata Knight Riders (KKR) and Delhi Capitals (DC) are coming into this match on the back of defeats, but they will do so with completely different mindsets. While Kolkata’s campaign seems to be falling apart, having lost three of their previous four matches, Delhi are still sitting pretty in the distinguished portion of the league table.

Regardless, it’s a pivotal match for both teams. On one hand, a win here will give KKR some breathing space at fourth spot while DC will look to consolidate their position in the top two. In nine seasons of the Indian Premier League (IPL) since the playoff system was introduced, only once has a team who have finished outside the top two during the league stage won the tournament. Hence, having done so well thus far, the Capitals would want to ensure that they make it to Qualifier 1 from here.

KKR NEED TO GET BACK ON TRACK

After their first six matches of the season, the Knight Riders had four wins and seemed to be in a comfortable position. But things have gone south quite dramatically since. In their last four games, they’ve won just one and that was via a Super Over. So, what has changed?

One way to look at it is the absence of Sunil Narine. The West Indian spinner was reported for a suspect bowling action after KKR’s sixth game of the season and, despite being cleared since, is yet to return to the playing eleven as he’s not completely match fit. While by his standards, he wasn’t having an outstanding season, his contributions during the death overs with the ball played a crucial role in victories over Chennai Super Kings (CSK) and Kings XI Punjab (KXIP).

While Lockie Ferguson has been impressive since he made his way into the playing eleven, the form of Pat Cummins is certainty a worry for KKR. You could, in fact, say that the Australian pacer has contributed more with the bat than with the ball this season. Having featured in all 10 matches so far, he has taken only three wickets at a strike rate of 72 – you’d expect much, much more from your premier fast bowler.

The batting, though, has been a bigger headache for the Kolkata-based franchise. There has been a lot of talk about CSK being laggard starters, but currently KKR are the slowest scorers in the league when it comes to the Powerplay. As of 22 October 2020, while the other seven teams have scored at 7+ runs per over in the first six, KKR’s run-rate during that period has been 6.7 in IPL 2020 until now. 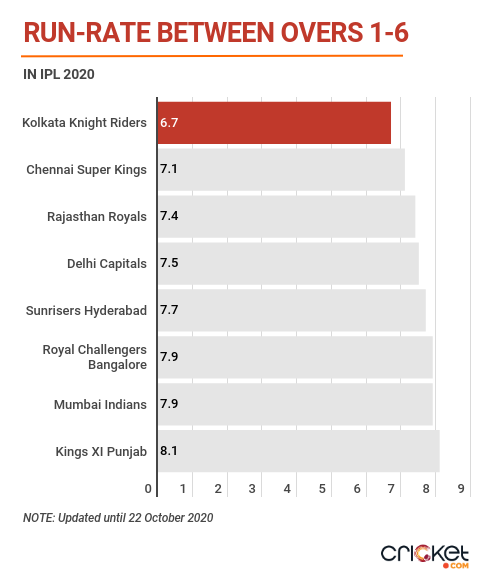 The middle-order has been out of sorts as well. Among all batsmen who’ve batted between positions 3-6 this season for KKR, only one – Eoin Morgan (39.71) – averages above 20. And the fact that there have been only two 50+ scores from batsmen playing in those positions also speaks volumes about how bad the situation has been. It won’t be a surprise if Nitish Rana, who has had a subpar season so far, makes way for either Rinku Singh or Siddhesh Lad.

All the aforementioned issues were there to be seen as KKR managed the lowest ever total in an IPL innings after playing 20 overs (84/8) against Royal Challengers Bangalore on Wednesday (21 October 2020). The team will need to show a lot of character to come back from that.

Knight Riders skipper Morgan was at the helm of affairs when England were knocked out at the group stage of the 2015 World Cup. He got his team to bounce back spectacularly in the years that followed which eventually culminated with England winning the next edition of 50-over cricket’s premier competition. He doesn’t have much time here, though, and needs to get his side back on track right away.

A FEW CHINKS IN DC’S ARMOUR

While the goal of any mission – be it in sports or in another field – is perfection, it’s something that is nearly impossible to achieve. Therefore, the task becomes to get as close to perfection as possible. The Capitals have been magnificent this season, with 14 points from 10 matches. But recently, there have been a couple of issues that have cropped up which they’d want to correct before the business end of the tournament.

One of those concerns has been the form of Prithvi Shaw, with the 20-year-old opener managing just 30 runs from his last five innings. It’ll be interesting to see if they keep faith in Shaw or decide to make a change at the top of the order. It’s not that they are short of options. A straightforward swap could see Ajinkya Rahane come into the team. While a Rahane and Shikhar Dhawan opening partnership might have seemed too conservative for T20 cricket not so long ago, the latter’s form has been such that the Capitals could perhaps explore this option.

While Delhi have been the best bowling side in the tournament so far, the fifth bowling option has been a worry for them. In the last match, Tushar Deshpande conceded 41 runs from two overs. Previously, bowlers who were given that role – Mohit Sharma, Harshal, Avesh Khan – have been expensive as well. With Stoinis also going at 10.1 runs per over this season, this is one area where DC are far from perfection at the moment. They need to find a solution for it soon, or else it could cost them just like it did against KXIP on Tuesday (20 October 2020).