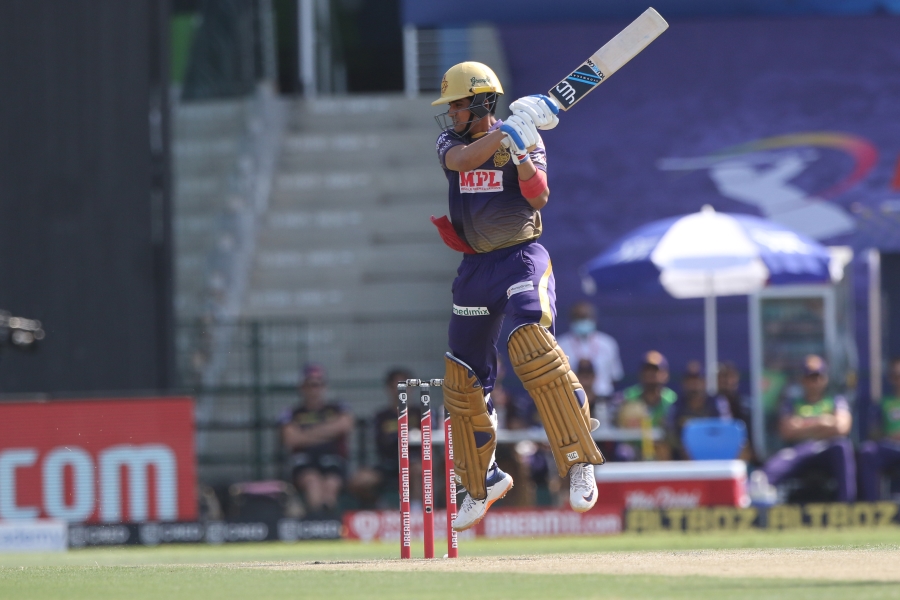 Kolkata Knight Riders (KKR) take on Rajasthan Royals (RR) in Match 54 of the Indian Premier League (IPL) 2020 at the Dubai International Stadium on Sunday (November 1). Both RR and KKR are currently tied with 12 points and this will be the final game for them in the league stage. The last time these two teams met was in the same venue on September 30, which saw KKR register a comprehensive 37-run victory.

KKR not only have a better overall record over RR, but they also have won four out of the last five matches in the IPL against them. 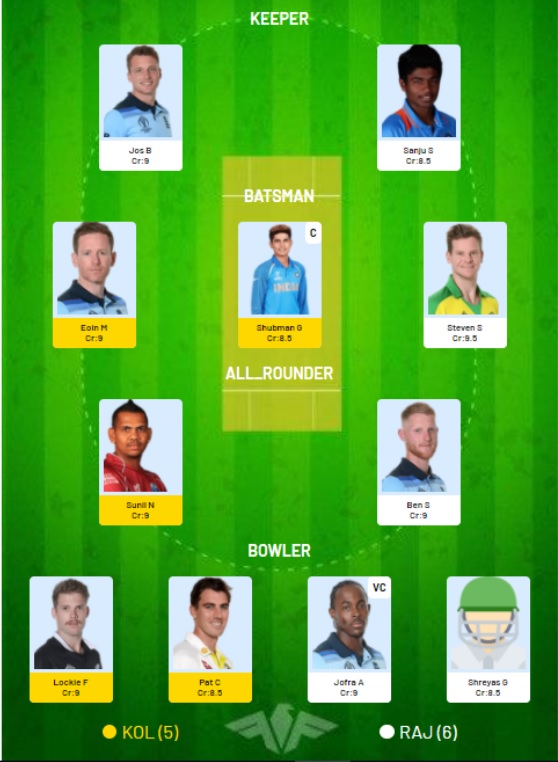 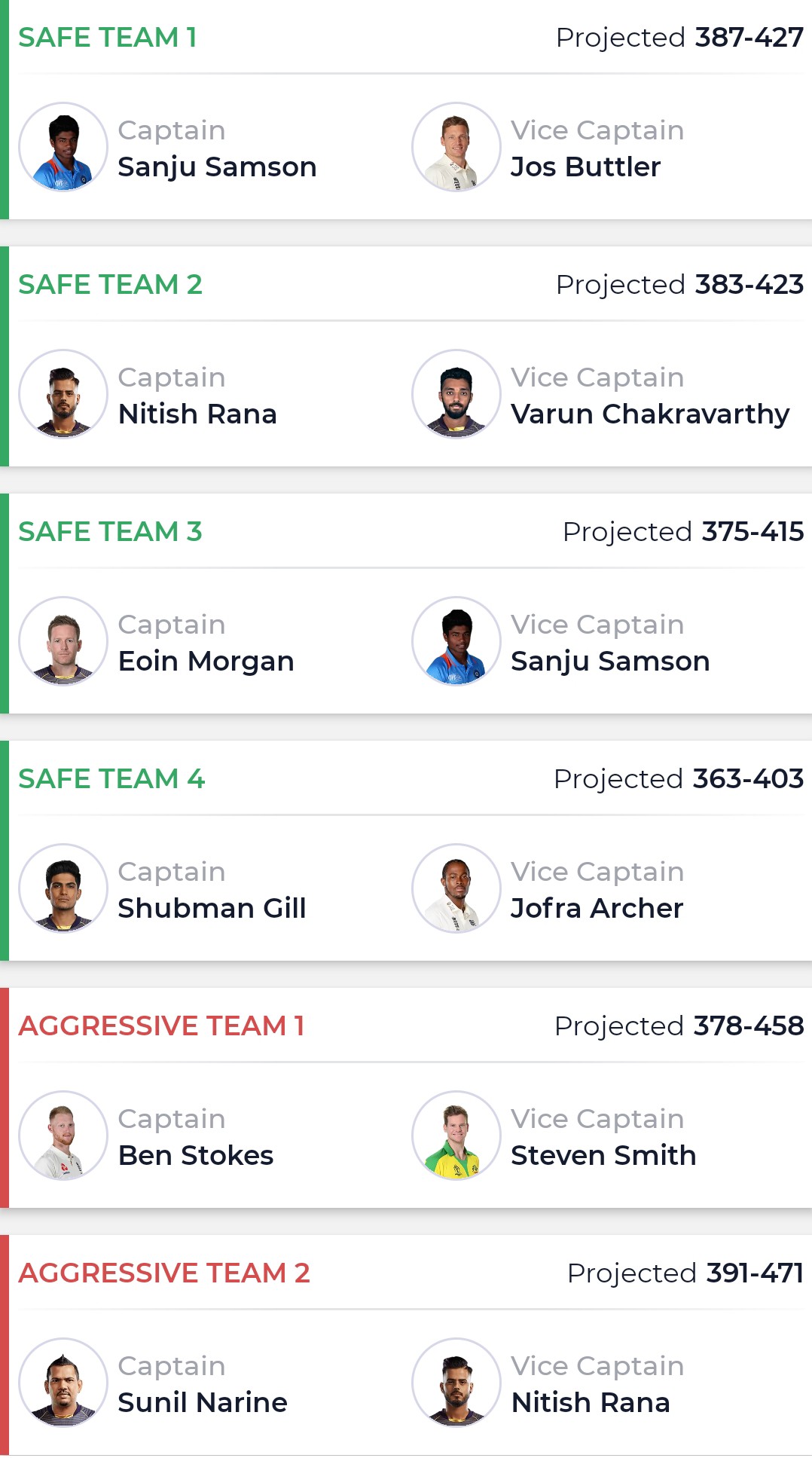 The batsmen have scored at a run-rate of 8.1 in the 22 matches played in Dubai, with wickets falling every 22.2 deliveries, 30.1 runs apart. Batting has become a tad easier in Dubai in the second half of the tournament though. If we do a comparison of  the first 11 matches against the next 11 matches in Dubai, while there has not been much of a change in the run-rate, in the first 11 matches, the bowlers picked up a wicket ever 21.6 deliveries at an average of 29.6. However, in the next 11, a wicket has fallen every 30.6 runs, 22.9 deliveries apart.

The team chasing has won three out of the last five in Dubai, which is contrasting to the initial stages, where teams batting first had won the first five matches in Dubai, which included a couple of Super Overs as well.

The average first innings score in Dubai is a healthy 173, while the average target chased in the venue is 169. There isn’t a yawning gap between the two, so, it could be safe to assume that the toss is not as important as it would have been in Abu Dhabi or Sharjah, but the teams winning the toss have been inclined to chase recently. 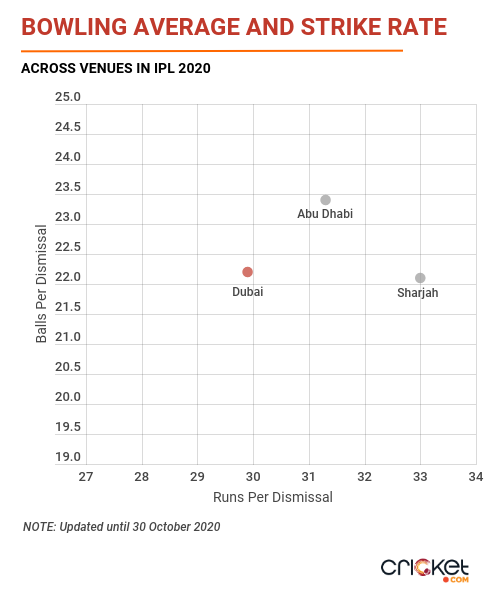 Pace once again continues to rule the roost in Dubai, having picked up 65% of the wickets – the lowest among the three venues. However, it is the exact opposite for the spinners, who with 35% of the wickets share have been the most successful in Dubai compared to the other stadiums.

In the initial stages of the tournament (first 11 matches in Dubai), the pacers had accounted for 61.7% of the wickets while the spinners picked up 38.3%. In the next 11 games however, the fast bowlers have increased their wicket-share picking up 68.4% of the wickets compared to spinners’ 31.6.

With the pacers picking up a huge chunk of wickets, especially in the latter half in Dubai, stocking your team with some fast bowlers could be the way to go, but at the same time, do not discount the value of a spinner as well. 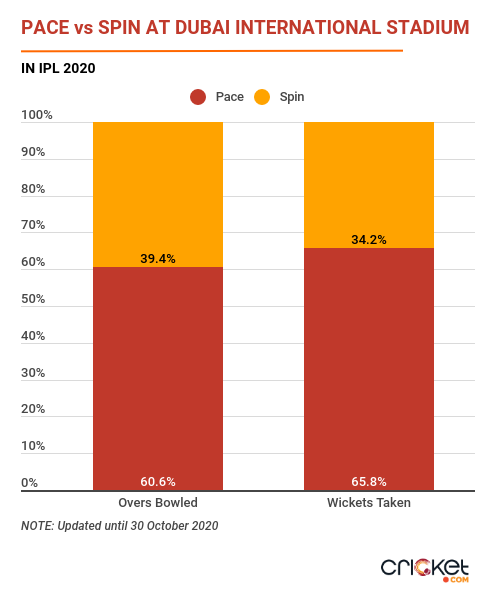 Shubman Gill and Jofra Archer have been in fine form this season. However, the young KKR batsman has faced just 10 balls from Archer across three innings and has been dismissed twice already, including the previous time when the two teams met in the tournament. Archer will look to replicate his success against Gill in this game too, however, we cannot discount the young Indian batsman’s ability to come out on top. 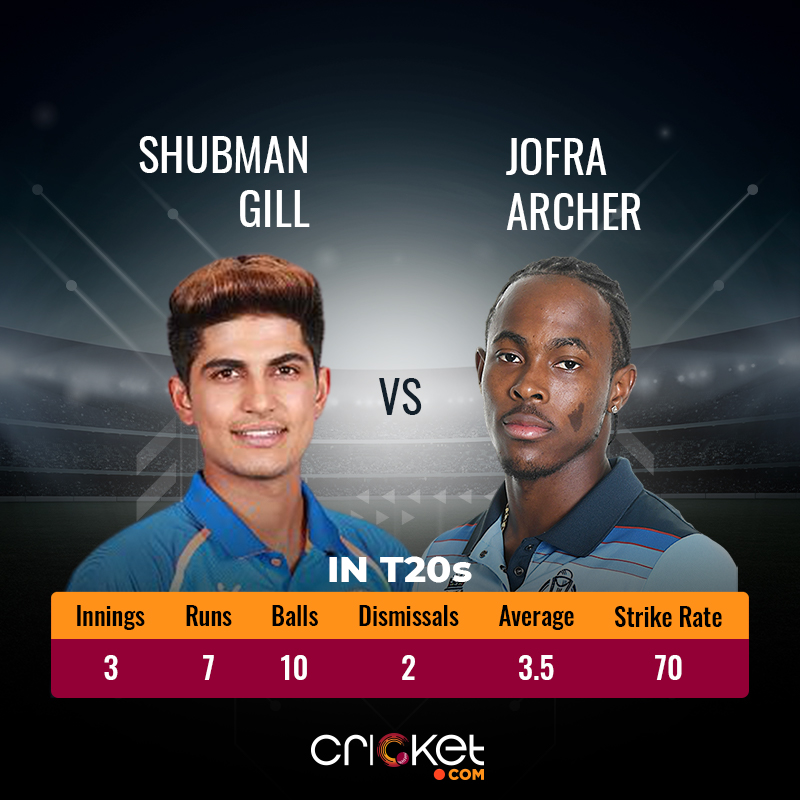 Sanju Samson has blown hot and cold this season, but has played vital knocks in the last few games to keep RR afloat. Sunil Narine, on the other hand, has not been the same bowler he was before he got banned for an illegal action. However, Narine has got the better of Samson on three out of nine occasions they’ve faced each other and moreover, the RR batsman has scored at a strike-rate of under 90 against the KKR spinner. With Samson in form, we could see him do better this time around. 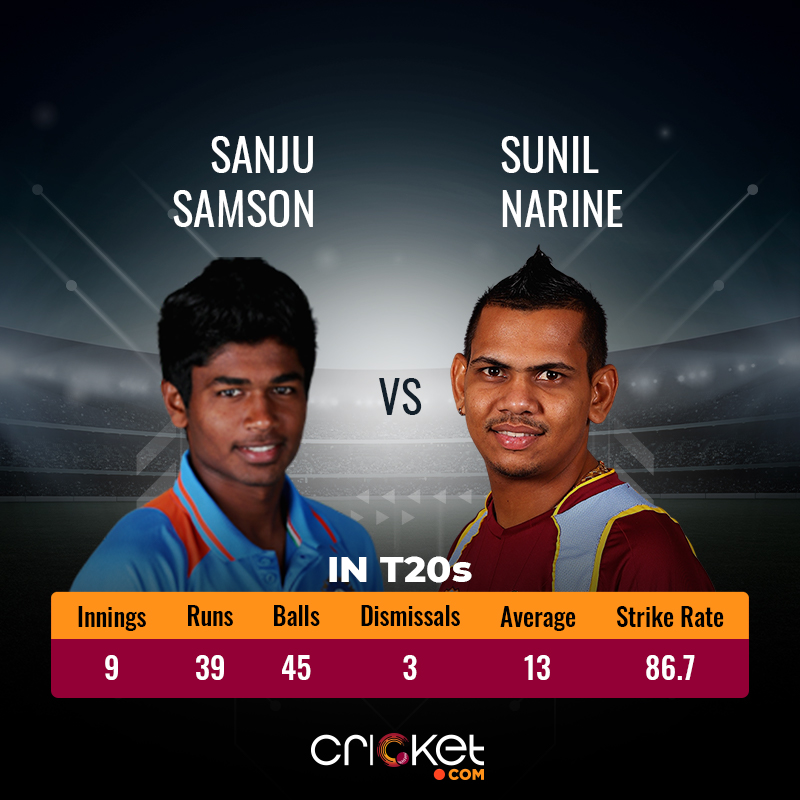 With just one fifty in 13 innings, Dinesh Karthik is going through a rough patch, but that has not stopped him from being in complete control against RR legspinner Shreyas Gopal. In six innings, Karthik has scored at over 156 against Gopal, who has not had a particularly good tournament either. This could be a great opportunity for both players to redeem themselves. 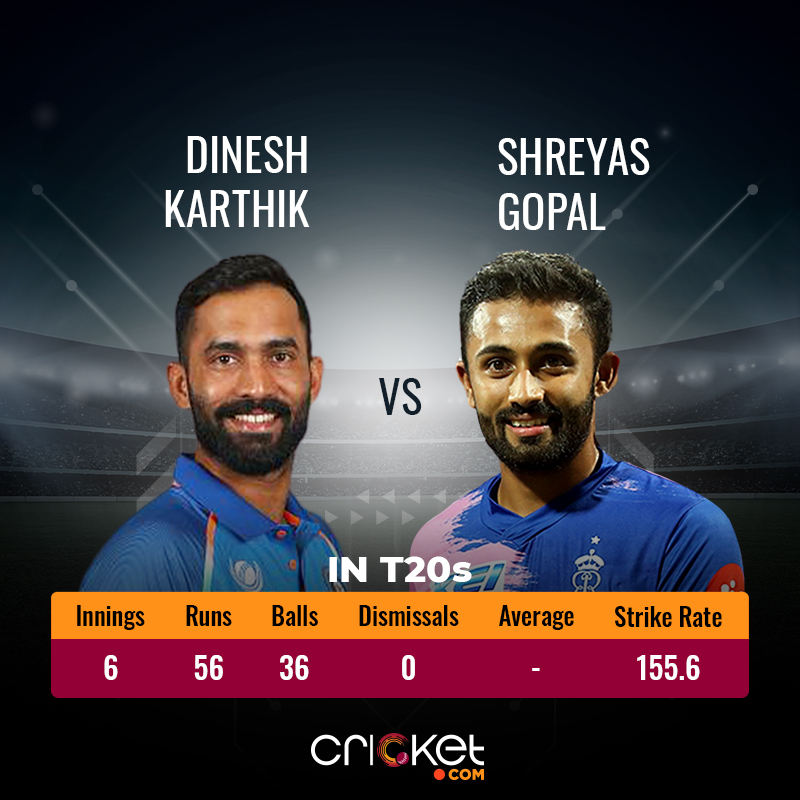 Shubman Gill has looked in good touch in the last couple of matches, with scores of 26 and 57 against CSK and KXIP respectively. This is Gill’s best IPL season so far, having accumulated 404 runs at 33.66. While his strike-rate of 115.75 is much talked about, but that should not play a factor picking him in your team as in fantasy cricket, the magnitude of runs matter and not the pace at which he gets them. In a campaign that has been below-par, Gill has been KKR’s shining light and has played a huge part in keeping them alive in the tournament.

Our Criclytics player projector predicts Gill could score 14-37 runs in this match.

Two-time IPL winning captain Gautam Gambhir has however picked Ben Stokes as his captain for this crucial tie. Here's a look at the rest of his team:

A quick-fire fifties, couple of wickets and a century are some of the things Ben Stokes has achieved in his last two matches. With him slowly getting into the groove, he is becoming a dangerous player for RR and could yet play a significant part in them making it to the final four. Stokes, who missed the initial stages of the tournament, has already notched up 267 runs from seven innings at a strike-rate of 141.26. While there were a few eyebrows raised initially when he was asked to open, he has taken on the role quite well.

Our Criclytics player projector predicts Stokes could score 14-37 runs and pick up 0-1 wickets in this match.

With 19 wickets at an economy rate of 6.69 from 13 matches this season, Jofra Archer has often fought a lone battle without much support from the other bowlers. On most occasions, Archer has given RR a good start with the ball, having picked up nine Powerplay wickets this season – second only to Trent Boult, who has 13. His recent form indicates he will be a good pick to your side, having scalped two wickets in each of his last three innings.

Our Criclytics player projector predicts Archer could pick up 0-1 wickets in this match.

While Sunil Narine has struggled with both bat and ball this season, there is no denying that on his day, he could single-handedly turn the game in his team’s favour. Upon his return he slammed an excellent fifty, but his struggles with the ball has continued. With this being a crucial game for his team, they should be able to bank on one of their best players to deliver and give KKR a glimmer of hope of making it to the top four.

Our Criclytics player projector predicts Gill could score 10-33 runs and pick up 1-2 wickets in this match.