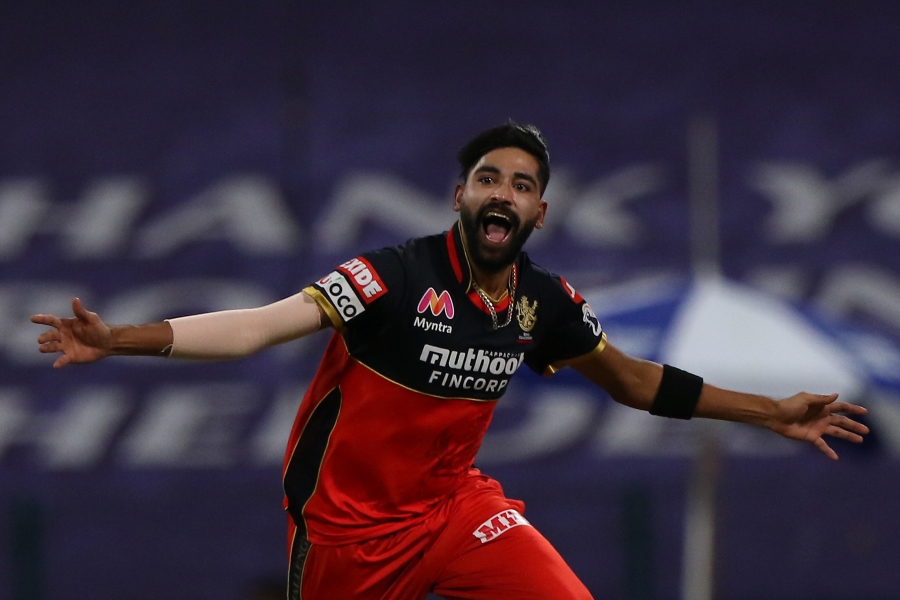 Siraj picked up 3/8 while Chahal returned 2 wickets as Bangalore restricted Kolkata to 84/8 before chasing down the target in 13.3 overs

It was a crash or rather a KKRash in Abu Dhabi as a record-breaking spell from Mohammed Siraj helped Royal Challengers Bangalore maul Kolkata Knight Riders by eight wickets in match 39 of IPL 2020. The win also saw Bangalore move to second spot on the points table at par with Delhi Capitals and they are now within touching distance of playoffs for the first time since 2016.

Kolkata won the toss, possibly the only thing they won today. It was pandemonium thereon. Kolkata lost 4 wickets for 14 runs and never recovered as they limbered to 84/8, the lowest first innings total in the history of IPL for a team that has played out their full overs.

Bangalore did not break much of a sweat chasing down the score getting there with 39 balls to spare. Critics might argue it could have been 59 but Virat Kohli & CO won’t fret much.

Both teams wanted to bat first on what looked like an excellent surface but it turned out to be a fast bowler’s delight in the initial phase with the ball moving all over the place. Mohammed Siraj took full advantage as he struck thrice in his first three overs, conceding just 2 runs. This included back to back maiden-wicket overs. With that, he became the first bowler to bowl two maiden overs in an IPL match. 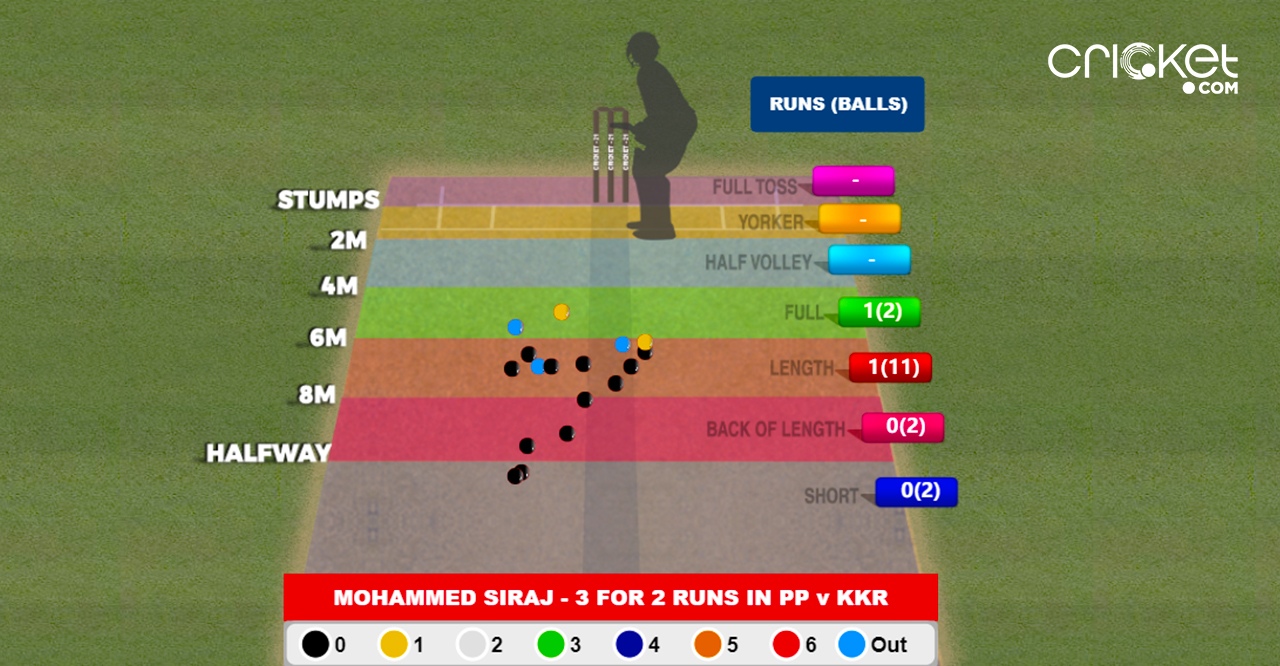 Chris Morris, expectedly took the new ball for Bangalore and as he has been all season, was on point right away. He got the ball to move away nicely and caught both Shubman Gill and Rahul Tripathi, off guard.

Siraj then struck gold immediately. He first got the wicket of Rahul Tripathi for 1 and the very next ball castled Nitish Rana with a glorious in-dipper. The wickets kept flowing for Bangalore. The third over of the innings, it was Navdeep Saini’s turn to strike. Shubman Gill (1) was undone by a short of a length delivery that he could only top-edge as far as Chris Morris who took a good catch running back.

Tom Banton got the boundary counter running by striking Saini for a four straight down the ground and then smashed him for a six over deep square leg. However, his joy was short-lived with Siraj striking again. An away going delivery found Banton’s blade as he fell for 10.

Kolkata could only manage 17/4 in their first 6 overs, the lowest Powerplay score this season and the fourth-lowest in the history of IPL. 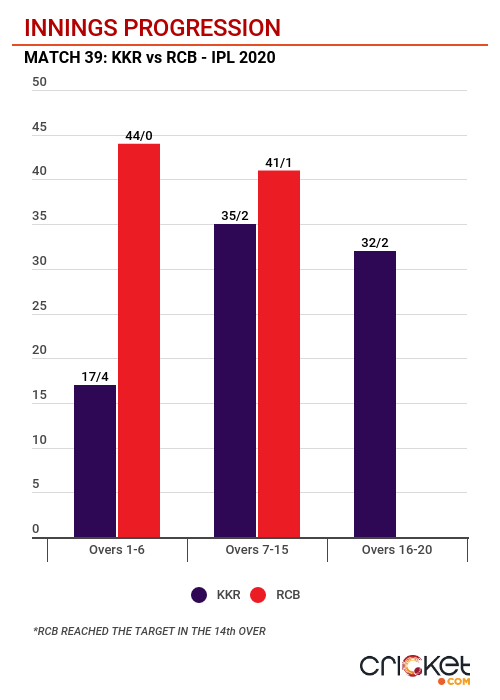 The middle overs did not bring any respite to KKR. With 4 wickets falling right at the start, it was always going to get tricky for them and they could only manage 35 runs between overs 7-15, easily the lowest this season.

The middle phase started with Morgan handsomely driving Isuru Udana past mid-off for a four. The KKR captain then struck Saini for a six over deep square leg. But amidst all this, Bangalore kept chipping away at the wickets.

Yuzvendra Chahal was introduced into the attack in the 9th over and it did not take him long to strike. Dinesh Karthik has struggled against leg-spin in the past and it once again brought about his undoing with Chahal catching him right in front of the stumps for 4.

Washington Sundar bowled the fourth maiden of the innings before Cummins trying to break the shackles could only hit Chahal as far as Devdutt Padikkal at long off to fall for 4.

By the end of 15 overs Kolkata had only hit 3 fours and 2 sixes. They reached 50 in 15 overs, which is the slowest any team has taken to reach the mark in the history of IPL.

Morgan, who looked the best batsman of the lot then fell to Sundar to leave Kolkata in dire straits at 57/7. Around this time it seemed Kolkata would fold before their 20 overs but Lockie Ferguson and Kuldeep Yadav at least assured they played out their full quota.

Siraj was easily the pick of Bangalore's bowlers returning 3 for 8 off his 4 overs, while Chahal picked 2 for 15. Except Isuru Udana, every Bangalore bowler managed a wicket. 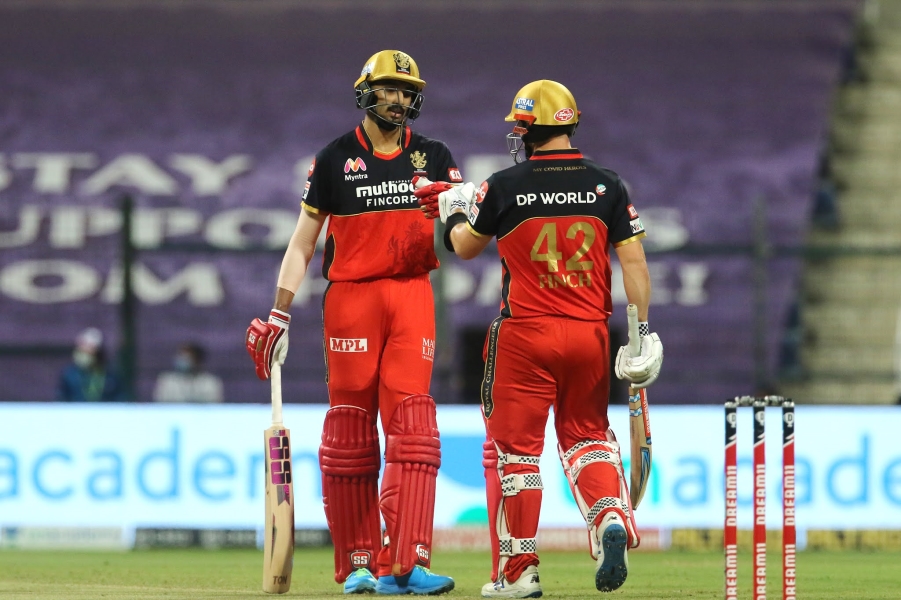 The Abu Dhabi surface was certainly doing a few tricks with Devdutt Padikkal and more so Aaron Finch looking a little uncomfortable against the new ball during the chase. But with just 85 to chase, both batsmen knew they could take their time.

Finch employed the tactic of walking down the wicket to counter the in-swinging delivery. He succeeded to an extent, but was also rapped on the pads multiple times. Padikkal though looked assured. He pumped Cummins inside out over mid-off before slicing Prasidh Krishna in the same region. Finch too found some runs via fours to fine leg and square leg.

By the end of the 6 overs, RCB were comfortably placed on 44/0 with both Padikkal and Finch in control.

Sometimes captains become so stubborn with their choices it comes off as baffling. With a target of only 85 to defend, Eoin Morgan introduced his best bowler of the previous match, Lockie Ferguson as late as the 7th over. The pacer struck immediately, which further put Morgan’s decision to hold him back into question.

Ferguson had Finch hopping around from ball one and a good length delivery outside off stump did the trick. Rattled by the sudden rise in pace, Finch could only poke at it with the ball taking the outside edge of his blade through to the wicket-keeper.

Two balls later it was time for his opening partner Padikkal to depart, courtesy a needless run out. A short of length delivery was tucked into the on side by Gurkeerat Singh Mann. He took a couple of steps but quickly receded. Padikkal for some reason kept running and that meant Pat Cummins had enough time to run to the non-striker’s end stumps and whip the bails.

Virat Kohli and Gurkeerat though assured there were no further hiccups. The duo put on a composed 36-run stand taking Bangalore to a comfortable victory in 13.3 overs. While Gurkeerat finished on 21* off 26 balls, Kohli remained 18*.