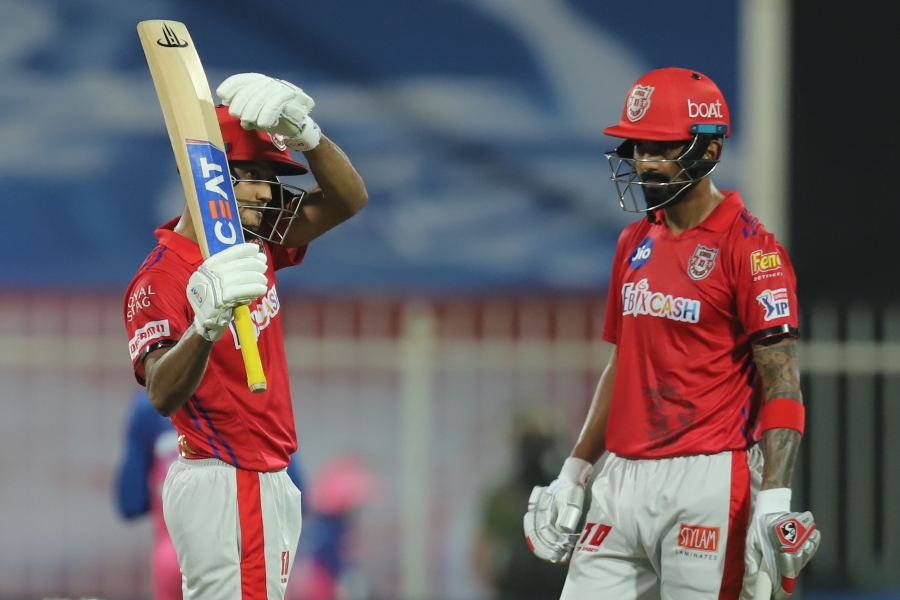 Kings XI Punjab opener Mayank Agarwal says his team's dressing room remains a positive space despite two close defeats in three IPL games so far and it won't be long before things fall in place for the side. Having done well at the Test level, Agarwal is in the middle of his breakthrough year in the IPL and smashed a spectacular hundred on Sunday night.

Despite a Super Over loss to Delhi Capitals and another close defeat to Rajasthan Royals on Sunday, Agarwal said the team is in good spirits. "See, very honestly, the talk in the dressing room is very positive, we still have 11 games to go, there are a lot of things that we are doing right, yes we have not been able to close out, but we are not focusing on the results," he said in the post-match press conference.

"The kind of cricket we are playing, the brand of cricket and the plans we are executing, we are quite happy with that."

Leaving swashbuckler Chris Gayle out of the eleven is always a tough call and Agarwal is just glad that he is able to the job for the team alongside skipper KL Rahul. "The management did speak a lot about it (on the opening pairing before the start of the IPL). We are not thinking about it too much, we are very happy with the way we are playing and the start we are able to give to the side and we will take it as it comes," said Agarwal.

"It was up to the coach and captain whatever decision they take, I will be happy with that going forward also."

Agarwal and Rahul form arguably the best opening pair in the ongoing IPL. "Definitely, it is a lot of fun to bat with KL, top-class cricketer we share a good friendship, he is a great guy. The talk in the middle was if we both are set, then one guy at least of us two bats through," he said referring to their 183-run stand.

Royals' in-form batsman Sanju Samson praised Rahul Tewatia for taking the team over the line with a 53 off 31 balls, including five sixes in an over bowled by Sheldon Cottrell, to turn the game in his team's favour.

"It was a very brave innings from Tewatia. He never gave up. I could see that he was so down (during their partnership) but he never gave up and he had the ability to come up and strike those 30 runs off an international player," Samson said.

"...he is going to be very useful to us in the tournament," he added.

It was a surprise call to send leg-spinner Tewatia at four but Samson said the move was well though out. "It was our coach Andrew McDonald and Zubin (Cricket Director) We have been working really hard on Rahul Tewatia. I think he's a proper leg-spinner and the management kind of saw the batting abilities he has, in the practice match.

"So they decided to send him up the order. I think it was a really brave move and he made them all proud."

Talking about the record 224-run chase, Samson added: "When you are chasing 220, there's only one way to go - play in the fifth gear. So it was easier. "When you're chasing 160-170 you need to think twice, like how to reach there but it's simpler now, it was just 'see ball, hit ball'."

Samson feels chasing works out best at a small ground like Sharjah. "Batting second in smaller grounds, you are one step ahead of your opponents, you know what you are chasing.

"Putting 223 on the board, they might have thought they have got enough but with smaller grounds and good wickets anything is chaseable in this tournament," he said.